Forrest Fenn’s Treasure: The Search Is Over

“The search has accomplished what I wanted,” Fenn told us. 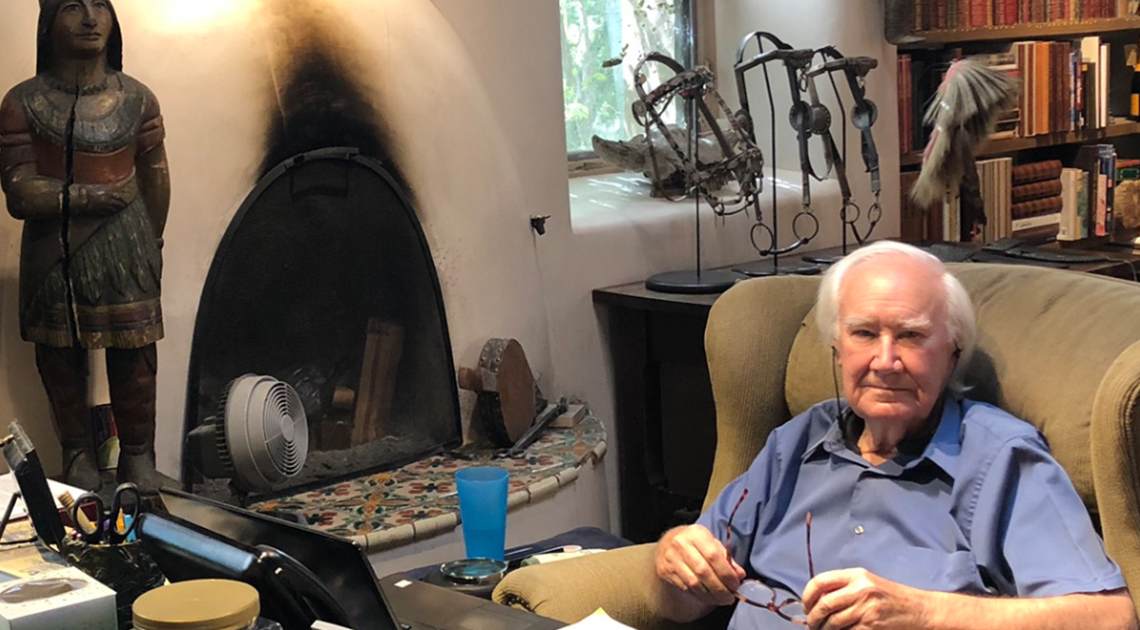 “If gold and gems are what you seek, we have a quest for you:
Off well-worn trails in Rocky mounts, a chest awaits one true
Of heart and mind, both resolute, in purpose and in goal,
Who knows no gold outshines the hues that
Sparkle in one’s soul.” – Forrest Fenn

I still remember the first time we walked into Forrest Fenn’s house. I always will.

It was October 2019, and along with a Ripley’s Believe it or Not! producer, we’d traveled all the way across the country to Santa Fe, New Mexico, just to step through Fenn’s front door and interview the eclectic, treasure-hunting octogenarian.

To be honest, I wasn’t sure if it was going to happen. Up until the point that we made contact that day, just a few hours before our meeting was supposed to take place, I’d only spoken to the man through emails and friends. I assumed his email was accurate, and that his offer to come for a visit was genuine. Still, there was always the chance that all of it could have been a game.

After all, Forrest Fenn, an art and antiquities collector, is the man who created his own personal treasure hunt. About 10 years ago, Fenn said he stashed $1 million in jewels—including rubies, emeralds, and diamonds—in a small chest somewhere in the Rocky Mountains. He then published a memoir, which included a poem of clues to where the treasure was buried. It soon became a bestseller, and people all over the world came to the area to search for the fortune. Some doubted its existence. At least five people gave their lives searching for it.

Fenn said he came up with the idea to help inspire people during the Great Recession to get out and explore nature.

This weekend, Fenn, 89, confirmed on his website (www.oldsantafetradingco.com) that the treasure has been found.

“It was under a canopy of stars in the lush, forested vegetation of the Rocky Mountains and had not moved from the spot where I hid it more than 10 years ago,” Fenn wrote on his site. “I do not know the person who found it, but the poem in my book led him to the precise spot. I congratulate the thousands of people who participated in the search and hope they will continue to be drawn by the promise of other discoveries. So the search is over. Look for more information and photos in the coming days.”

When I heard the news it made me think back to eight months ago, when we first walked nervously into his home. The façade was unassuming, partially hidden off of a gray, dusty road. We pulled up and wondered if we were in the right spot. And of course, I was worried if we would be let in at all.

I shouldn’t have been. The man himself was there waiting for us, as was a caretaker, and they greeted us immediately. We were let into an entryway with high, spacious ceilings—it was a much bigger house than we could have imagined from the outside. We were led to Fenn’s study, which was something straight out of Indiana Jones, or possibly, Ripley’s Believe It or Not!

African masks and other exotic collectibles hung from the walls, and hundreds of books lined his shelves. I was fascinated by what hung in one corner; Fenn told me was a Rhino Shield, something natives would use to hide behind, protecting themselves from charging rhinos. In a vault in another part of the room, he showed us a peace pipe that belonged to Sitting Bull.

It was memorable, to say the least. Surreal is another way to describe it. And that was before we even heard his story. Fenn’s life could easily be made into a movie—and probably will be someday. He sat to talk to us and immediately owned the room. He was comfortable, bright, and energetic, looking much younger than his age. And his memory was extraordinary.

Example one. This is how he described the treasure chest he left somewhere in the Rockies:

“And so I have this wonderful little treasure chest, bronze. A couple hundred years old, and I started filling it with wonderful things: Two hundred and sixty-five gold coins, American eagles, and double eagles. Hundreds of gold nuggets—two of them as big as a chicken leg. There are two little antique Chinese jade carvings that are absolutely wonderful. Some precious stones. And then there’s a Jaguar claw.”

It sounded too good to be true. But that was just the beginning. Fenn told us of his humble beginnings in Texas, and how he escaped to see the world in the Air Force, where he would go on to fly 328 combat missions in Vietnam. Once, he was shot down and had to wait in the dangerous Laotian jungle for rescue. But he survived, and he came back to the U.S. with a Purple Heart and a determination to become a financial success.

That led to him opening an art and antiquities store in Santa Fe, which led to fortune and fame, as celebrities like Jackie Kennedy, Michael Douglas, and Gerald Ford either purchased from him or perused his merchandise. He made lots of friends and acquired many valuable things.

But in 1988, Fenn was diagnosed with kidney cancer and was given a 20 percent chance of living three more years. He began to contemplate what his legacy would be.

“When your doctor tells you you’re going to die — I mean, one in five chance is not very good,” he said. And he got an idea: perhaps he could leave some of his belongings behind as part of a treasure hunt. That could be his legacy. He started putting a few beloved items into a small bronze chest.

But he’d hired the best doctors, and gradually, he grew better. He beat the death sentence and went on working, enjoying life. Still, he always thought about the chest, and every now and then he would add another item. Finally around 2010, he thought the small collection may be complete.

He packed up, drove out somewhere into the Rockies, and left the chest for someone to find.

After his book and poem were discovered, he became the subject of hundreds of interviews, and people swarmed to hunt for his treasure. One of the most dedicated of those hunters is Sacha Johnston, who estimates she’s gone out on more than 300 hunting trips into the Rockies, searching for the treasure.

Johnston, a 39-year-old media relations coordinator from Topeka, Kansas, hosts a YouTube show about treasure hunting, and eventually became friends with Fenn. She’s actually the person who introduced me to him.

When I found out the news this weekend, I had to text her. “Well,” I wrote. “I suppose you’ve heard.”

“Of course I have heard,” she replied.

“How do you feel?” I wrote back. “I assume there’s always more to find, right?”

“Crushed. I was a day late and a dollar short,” she typed. “But, I am working on other treasure hunts.”

Johnston mentioned a hunt known as The Secret—in 1982, writer and publisher Byron Preiss hid ceramic keys in 12 parks in America and Canada. Find a key, and you win a jewel. But hunters must first decipher a verse and match it to a painting, which can be found in a book he published called The Secret. That information then gives you the location in the park. Preiss died in a car accident in 2004, taking the knowledge of the locations with him, but his family continues to honor the deal. So far, only three have been found.

And Johnston continues to search. Still, she misses what could have been.

“I am happy for whomever found it,” she wrote. “I hope he is happy and lives out all the dreams he ever had.”

Fenn said he received a photograph of his bronze chest as proof and he was able to confirm the location and the discovery. He also said the discoverer—a man from “back East”—wishes to remain anonymous.

There are still those who think none of this is true, that it’s all a story, and that the ending is purposefully vague. Linda Bilyeu, whose ex-husband disappeared into the New Mexico wilderness in 2016 while looking for the treasure (his deceased body was found six months later), says it was all done for publicity. Fenn will counter that he needed no publicity, that he made no money from the sales of his book (proceeds went to the local bookstore that sells it) and that his life would have actually been a lot quieter if he hadn’t told anyone he’d hid any treasure.

Unless the mystery person ever comes forward, we may never know the real truth. I called and emailed Fenn for a comment for this story and a spokesperson for the family declined, saying the statement on his website is all he wanted to say. “I think he’s just ready to have some peace in his life,” Johnston wrote to me.

In two months, Fenn will be 90 years old. When he sat down to do our interview last October, he was warm and cheerful. He seemed to enjoy talking about this part of his life. He believed in the power of getting out into nature to search for something, that even the act itself could be a treasure. And what did he seem to cherish the most? He told us of emails and letters that had been sent to him, describing how his treasure search had changed peoples’ lives for the better.

One little girl and her father wanted to go search—she said if they found the treasure, she guessed she would share it with her younger brother. Another man said he was thinking of taking his own life until he heard about the hunt. The search gave him something to live for.

“[The search] has accomplished what I wanted,” Fenn told us. “I got a wonderful e-mail. There was a man that had not spoken to his brother for 17 years. He read about this treasure story and called his brother and now they’re looking for the treasure chest. Wow.”

“How powerful is that?”

Next post The Mystery Of Ambrose J. Small, The Missing Millionaire

Previous post Bed And Batting Cage Breakfast? You Can Rent This Professional Stadium!