Uncover the dishonesty in a tale about the virtues of honesty. 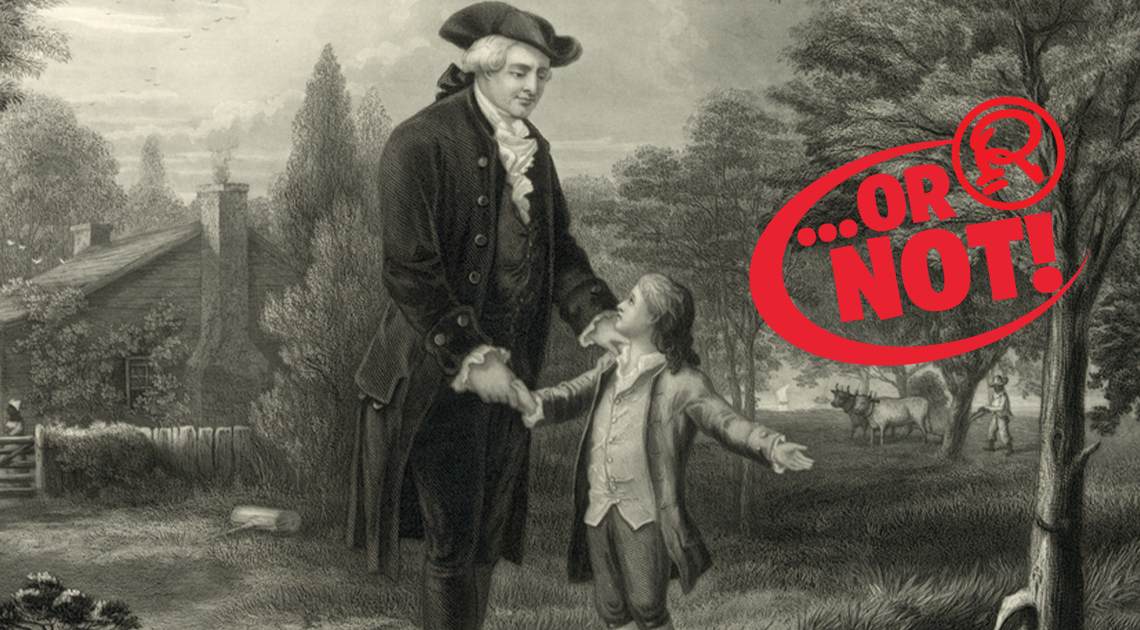 On August 10, 1835, Joice Heth—a so-called 161-year-old African American slave—regaled sideshow audiences with stories of life as George Washington’s childhood nurse. Heth’s story wreaked of a hoax. Yet, her deeply wrinkled visage, talon-like long nails, and toothless grin suggested great age. Of course, it was Heth’s tales of “little George” that cemented audience belief in her identity. One of her favorites? The time George copped to assaulting the family’s cherry trees with a hatchet. 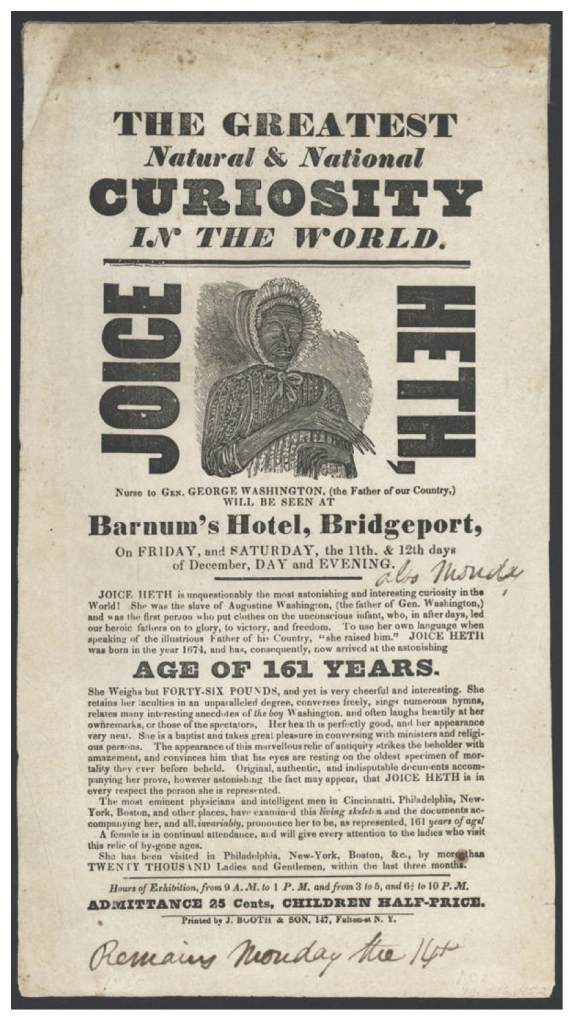 During a seven-month-long tour, Heth raked in an estimated $1,500 per week for her owner, P.T. Barnum, launching the showman’s stardom. Why did the cherry tree story resonate with audiences? They were already familiar with the “I cannot tell a lie” story because of one of George Washington’s first 19th-century biographers.

Ironically, the story about never telling a lie is, in fact, a lie. Here’s what we know about its invention.

“Little George” and the Cherry Tree

The cherry tree story remains one of the oldest and most famous tales about George Washington’s childhood. As the legend goes, when Washington was six years old, he received a hatchet as a gift. (Apparently, George’s parents weren’t much into helicoptering.) Of course, before the Washingtons knew it, their son was wreaking havoc on the family’s Virginia plantation with his miniature ax.

Augustine confronted his son after noticing that one of the cherry trees had not avoided an attack from the small boy. To his astonishment, the child proclaimed, “I cannot tell a lie… I did cut it with my hatchet.” Augustine hugged his young son, telling him that honesty was worth more than a thousand cherry trees.

Voilà, an American myth was born. One that would fortify generations of schoolchildren against the sin of lying. One that would also, ironically, give weight to P.T. Barnum’s greatest lie, the “Heth hoax.” (Upon Heth’s death on February 19, 1836, a public autopsy, which Barnum charged admission for, revealed she was no more than 80 years old at the time of her passing.)

Barnum never took to heart the moral behind the cherry tree story, though we can only imagine how many times he heard Heth retell it during her brief sideshow career. Or, perhaps he did, considering the tale itself was fabricated to sell copies of Washington’s biography.

The Life of Washington, an Instant Bestseller

Who invented the cherry tree story? Mason Locke Weems, an itinerant minister, bookseller, and author of The Life of Washington. The former American president had died in 1799, and Americans were hungry to learn more about their first commander-in-chief. 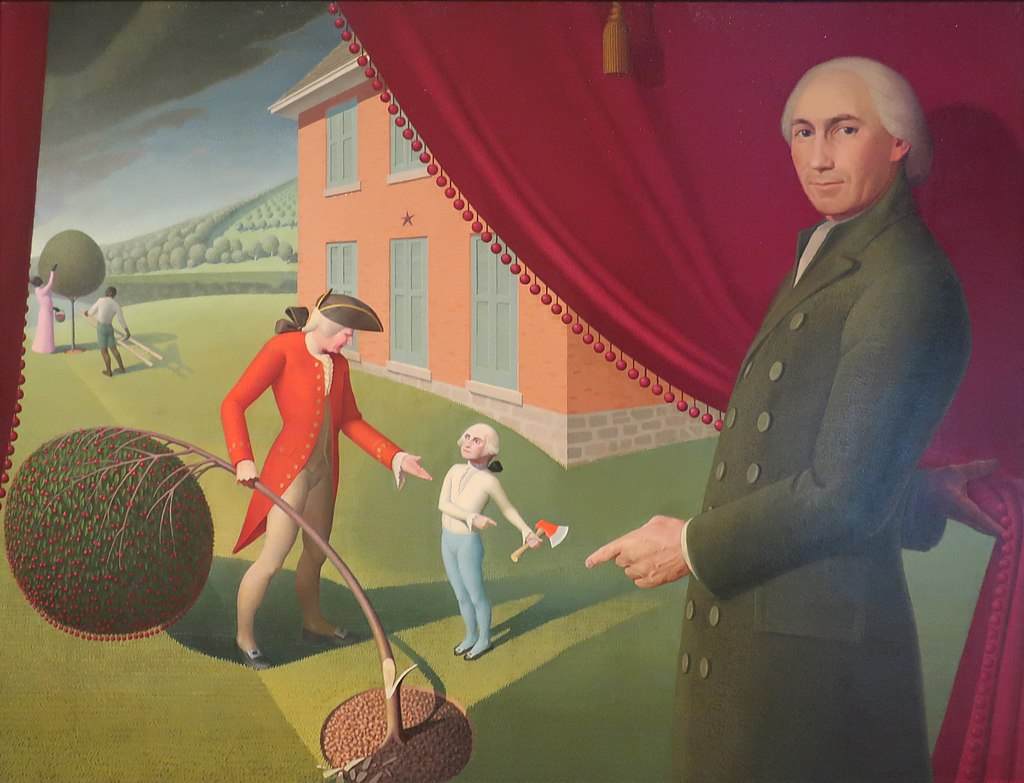 Painting depicting Weems and his famous story of George Washington and the Cherry Tree.

In January 1800, Weems told his publisher, “Washington you know is gone! Millions are gaping to read something about him… My plan! I give his history, sufficiently minute… I then go on to show that his unparalleled rise and elevation were due to his Great Virtues.” Weems’s resultant autobiography saw its first publication in 1800, becoming an instant bestseller. With the creation of the book’s fifth edition in 1806, the cherry myth first appeared, and Americans consumed the fable with relish.

Decades later, a Presbyterian minister and college professor named William Holmes McGuffey latched onto the tale anew. Passionate about teaching morality and religion to children, he incorporated the legend into his instructional textbooks, referred to as McGuffey’s Readers. His readers sold more than 120 million copies upon publication in 1836.

Why did Weems invent the iconic cherry tree story about the value of honesty? Like P.T. Barnum a few decades later, money remained an essential motivator. Weems knew he had a hit on his hands—if he could uncover enough unknown details about Washington’s life (or invent them) to satiate his audience.

But the vested Federalist, who prized self-discipline and order just about as much as money, had a moral and political stake in the story, too. He wanted to correct the early American tendency to deify Washington. By focusing on Washington’s private virtues instead of his public accomplishments, Weems moved away from the nation’s temptation to venerate their first president.

In other words, he made George look good without rendering him a god. Weems wished to provide the perfect role model for young Americans, one made of flesh and blood. If it came at the cost of historical accuracy, so be it.

Early Americans and the Popularity of Weems’s Work

Why were the American people so willing to soak up Weems’s lies? Because he knew how to give the American people exactly what they wanted, a homespun origin story for arguably the nation’s greatest hero. While other myths abounded in the book, the cherry tree fable became Weems’s most significant contribution to the Washington legend. As the biographer had rightly assumed, people longed for a popular history of Washington.

They thirsted for a link to their recently deceased leader. After all, America faced plenty of uncertainty moving forward as a new nation amongst a host of powerful Old World adversaries. (Just eight years after the publication of the fifth edition of The Life of Washington, the British burned the White House to the ground on August 24, 1814).

The ability to celebrate one of their favorite heroes provided a balm for these growing pains. Especially when it involved a hero that children could emulate through small acts of virtue. Perhaps this also explains why so many mid-19th-century Americans proved gullible when it came to the “Heth hoax.” Apart from the sensationalism and peculiarity surrounding Barnum’s claims, people longed for a connection to Washington. Heth appeared to provide it, ironically enough, by embodying the cherry tree story.