Rhino beetles and other ginormous bugs are kept as pets, used in gambling fights, and also eaten as food. You've got to see the size of these things! 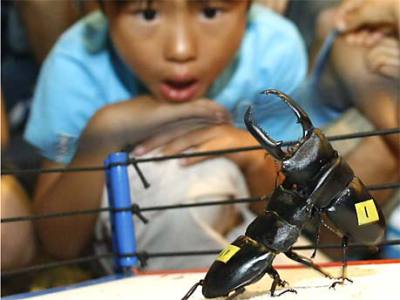 Among others, rhino beetles are popular as pets around the world, in part because they are clean, easy to maintain, and safe to handle.

The video of the crawling mega-bug (above) was taken in Costa Rica.  Say what you will, but every time I watch it I get the heevy jeevies!

Forms of insect fighting as a gambling sport are practiced in regions of China, Japan, Vietnam, and Thailand.

Male beetles are used in the fights since they have a natural tendency to battle each other for female attention.

In some parts of the world they actually eat these ginormous bugs. I guess they must be an acquired taste.

Entomologist Séverin Tchibozo suggests they contain much more protein than chicken and beef and they could become a protein source for a large human population.

The taste is described as “kinda” nutty / lobster / crab taste. Very good with a spicy curry and fried eggplant. Wait … so it doesn’t taste just like chicken?

HOW TO PREP YOUR BEETLE FOR DINNER

Would you keep one as a pet?

Next post Watch this Spider Transform Into a Mirror