If there’s one thing even those with zero interest in history know about Ancient Rome, it’s that they had a real flair for all things decadent. Showing off power, wealth and accomplishment, that’s what it was all about. Their buildings were the tallest, their empire the biggest, their Emperor the richest, their shows the most brutal. Those fabled arena battles continue to captivate us, centuries later.

Gladiators are, you could say, the most beloved ‘celebrity’ warriors the world has ever seen. Many of those who met grim ends in front of the baying crowd were condemned criminals, but the top gladiators? They were there voluntarily. For the thrill, the sport, for fame and fortune.

Did they actually throw swords onto tables in the audience, howl “are you not entertained?” and then give the smarmy emperor a sound beating before keeling over themselves, as Russell Crowe did in Gladiator? Well, no, but one thing’s for certain: they were deadly showmen. Not unlike today’s professional wrestlers, all told.

Now there’s an interesting question. Who would come out on top, gladiators or today’s wrestlers? To answer that, we’ve got to take a closer look at how they fought, how they lived and how they died.

Round One: Who Were The Bigger Celebrities?

In the days of Ancient Rome, of course, not all of those who fought in the ring were gladiators. Some of them didn’t fight at all but were condemned merely to die theatrically, dramatically and bloodily for the crowd’s enjoyment. They tended to be the lowest of the low, outside of the protection of the law, essentially considered sub-human. 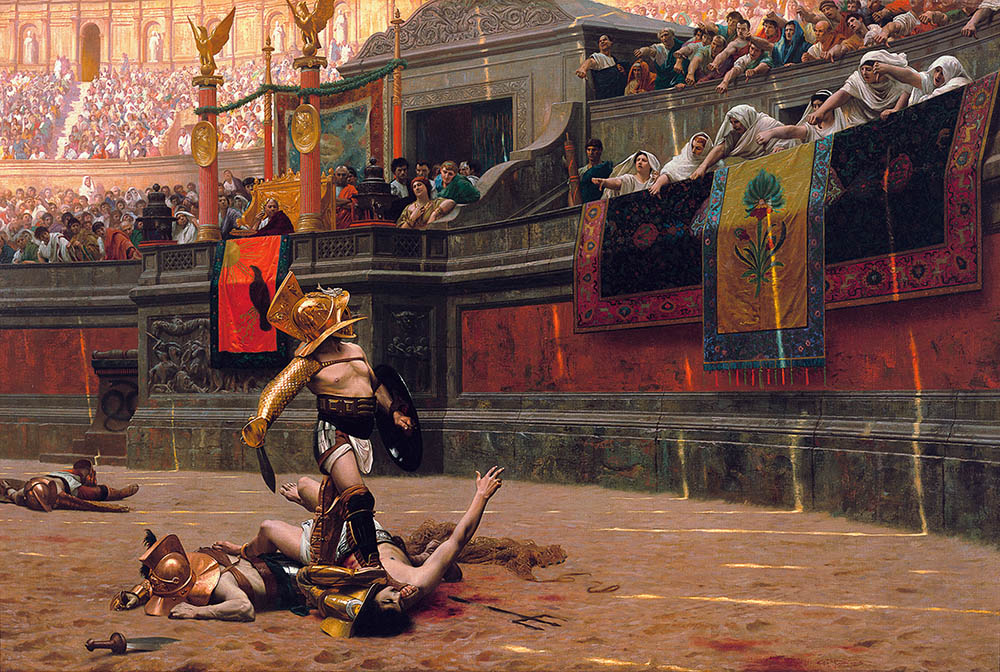 “Gladiators in Rome were regarded as fundamentally untrustworthy and outside of legal protection. It is more useful to think of gladiators as prisoners on death row than as David Beckham with a net and trident,” as The Conversation put it. That was the case for the majority of gladiators, certainly, but those who continued to excel–and survive—could even become (as PBS put it) “the movie stars of the first century.”

The Syrian slave Flamma certainly lived up to that reputation. A particularly beloved gladiator would be offered a rudis, a small wooden sword that indicated their freedom. Flamma was offered the rudis on four separate occasions, but turned it down each time preferring to fight on. He was held in such high regard that his face appeared on a Roman coin!

A true superstar, he died at the age of 30. Proving that a select few gladiators were considered true heroes and buried with honor, his gravestone in Sicily reads, “Flamma, secutor, lived 30 years, fought 34 times, won 21 times, fought to a draw 9 times, defeated 4 times
a Syrian by nationality… “Delicatus made this for his deserving comrade-in-arms.”

The professional wrestlers of the first century, meanwhile, doesn’t have quite the same ring to it. As far as sports go, wrestlers are never quite up there on the A-list of celebrity athletes (wrestling fans may beg to differ). These days, true celebrity wrestlers make their names by expanding beyond wrestling itself. Think Dwayne ‘The Rock’ Johnson’s acting career, John Cena’s rise to meme stardom and… Hulk Hogan’s hilariously awful Honey Nut Cheerios commercial.

Still, with the cult of celebrity being what it is these days, it’s not hard to become famous. Only the very cream of the crop earned that distinction in the arena. Who wins this round? I suppose it depends on whether you favor quality or quantity, in terms of fame.

Round Two: Who Were The Bravest?

So, round one didn’t really bring us any conclusive evidence. Let’s move on to round two, then: who would win out in a show of force?

In terms of weapons, it’s probably a safe bet that the gladiators would come out on top. If you’ve delved a little deeper into the gladiators of Ancient Rome, you’ll know that they came in a variety of deadly flavors. Classes included the Retiarii, who fought with a net and trident, and the Murmillo, who wielded a sword and shield. Some were heavily armed, while others eschewed heavy armor to be light and agile.

Funnily enough, professional wrestlers don’t tend to have the luxury of bringing deadly weapons into the ring. They all tend to have their own signature moves, which are as theatrical and painful looking as you’d expect, but other than that… oh wait, there was that time that Triple H fought with a sledgehammer, Jeff Jarrett brandished an acoustic guitar and Jake ‘The Snake’ Roberts fought with the aid of his snakes! In the name of putting on a show, heel wrestlers have used all kinds of dangerous foreign objects in a match.

Professional wrestling is sometimes dismissed as ‘fake,’ but the dangers are truly, horribly real. In the sad case of Perro Aguayo Jr, for instance, a tag team match in Tijuana, Mexico in 2015 ended in tragedy. A dropkick from Rey Mysterio sent him neck-first into the ropes. The awkward angle saw the unfortunate luchador die within moments.

In another famous case, Owen Hart lost his life in 1999, during the Over The Edge pay-per-view event in Kansas City. He was being lowered into the ring from the rafters to make a dramatic entrance when the quick-release mechanism on his harness (he was to ‘accidentally’ fall face first into the ring from a safe height, to give the audience a laugh) seemed to activate early. He fell almost 80ft into the ring, dying soon afterward.

In the case of the gladiators, fighters of true quality were often so expensive that their shocking ends were accidents at times, too. Both sets of performers would ‘stage’ combat at times, but it was still super dangerous for everybody concerned. Again, it’s hard to pick a winner between the two, especially when you factor in the point that the gladiators (whose fights were supposedly to the death) often weren’t there by choice, to begin with.

Round Three: Who Would Ultimately Prevail?

So, yes. As we’ve seen, in a snarky battle of professional wrestler versus gladiator, there’s little to choose between them. Both have the potential to be quite glamorous Walk of Fame stars in their own times, and both are certainly master showboaters. They’re also probably about equal in the fitness and strength front, too, with the elite training involved in their respective careers.

When it comes right down to it, though, professional wrestlers aren’t really setting snakes on each other or suplexing each other’s spinal cords into 6000 tiny shattered pieces. Because of the very nature of wrestling and the absurd situations that the combatants can get into, some things are for show. The debate as to how far wrestling is a sport and how far it’s purely entertainment, as How Stuff Works explains, still goes on.

By comparison, the grisly spectacles that took place in the Roman arena were usually for real. Wild animals, criminals, gladiators, all bled and died there (the word ‘arena’ is actually Latin for sand, which was needed in copious amounts on account of all of the blood). At some celebratory games, the bloodshed went on for days on end.

Such was the brutality of the arena, even faking your death wouldn’t help you. A man dressed as Charon, the Underworld Ferryman, would pass among the injured or supposedly dead and smash their skulls with a huge hammer. Just to be sure.

Have you ever seen that in a wrestling match? You’re darn right you haven’t.

Don’t forget, though, that staged fights were super common throughout the Roman empire; the best of the best were just too expensive to wantonly risk. There’s evidence that they received medical treatment and care, which isn’t surprising considering the investment and potential earnings they represented.

When all’s said and done, there are lots of parallels to be drawn between professional wrestlers and history’s gladiators. Both have faced great dangers (some intentional, some by accident). Both have seen excellent fighters rise to become legends. Both have wielded lethal weapons in the name of a baying crowd’s entertainment.

Who would ultimately win out if they met in the ring today? That’s for you to decide for yourself. One thing’s for certain though: that’d be another huge spectacle.

Next post Monk Seals Keep Getting Eels Stuck Up Their Noses

Previous post The Caesar Salad Is Not an American Creation