Poland’s New Glowing Bike Trail is the Stuff of Dreams

With this you can ride your bike on the stars. 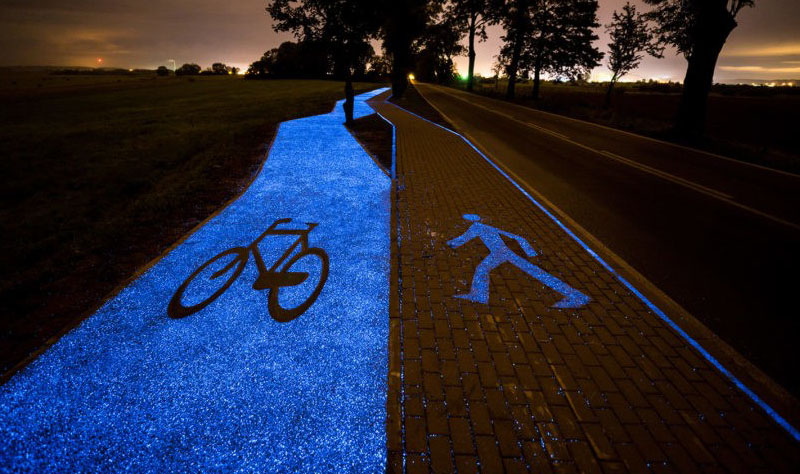 There’s something magical and mysterious about things glowing in the dark. The soft light being swallowed by the surrounding darkness suggests safety in a sea of uncertainty. Glowing often feels magical or otherworldly. Now that feeling is being added to a bike trail in Poland.

Lidzbark Warmiński is a small town in Northern Poland. Inspired by a similar path created by Studio Roosegaarde in the Netherlands, TPA Instytut Badań Technicznych institute decided to bring something special to the small town.

The path, which glows a bright blue in color, was created with the use of phosphor, a substance that absorbs sunlight, and then glows in the dark. This means the bike path will charge in the sun all day long and then will glow for roughly 10 hours each night.

The result is a beautiful sight which also happens to be all natural and won’t drain any of the city’s power.

Studio Roosegaarde’s bike patch in the Netherlands was inspired by Van Gogh’s Starry Night painting, but they used LEDs and some glow in the dark paint.

The beauty of the bike lane speaks for itself, but the real reason the city decided to do something so unique was to increase the safety of people traveling at night. A glowing bike trail gives citizens a path that can clearly be seen as well as the ability to be seen by others.

The bike lane is still just being tested before it’s put into place in other areas. Researchers aren’t sure yet just how long it will last before it starts to wear down. Whether the wear comes from traffic or just from a weakening of the materials remains to be seen, but if this glow-in-the-dark bike trail works, it could be coming to a park near you in no time.