Baby Hippo Fiona Is about to Make Her Starring Debut

It’s hard to believe that Fiona, this adorably cute premature hippo, has made a speedy recovery during her time at the Cincinnati Zoo and Botanical Garden. In these past several months, Fiona has been taught to walk, swim and even nurse on her own.

The four-month-old is now being introduced to an outdoor habitat, where she has been swimming with excitement in a 9-foot-deep pool. Zoo caretakers stand around the pool, encouraging little Fiona to swim onward. While this might sound like a job for her hippo parents, Fiona just couldn’t stand on her own to be nursed. Her parents weigh more than 3,000 pounds, and Fiona is only 275. The zoo caretakers are slowly introducing Fiona to her parents and say things are going very well.

Fiona has come a long way. Her care team have monitored her diet carefully for the past 4 months & she is now up to a healthy 265lbs. pic.twitter.com/h2C5drARUp

Fiona can only spend short periods of time outside. Her pool session last about an hour. It takes a ton of energy for Fiona to propel her little self to the bottom of the pool and then pull herself up for air. Imagine doing that over and over again. Unfortunately, she is not ready for her public debut, since there’s so much more this courageous hippo has yet to explore. 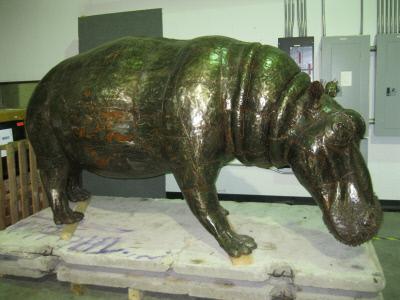 This hippo is made of scrap metal from oil drums, construction materials and crashed cars!

Previous post Reg Spiers: The Man Who Shipped Himself Home in a Box