LOOK BEFORE YOU LEAP: The 100 Year History Of Stuntworkers 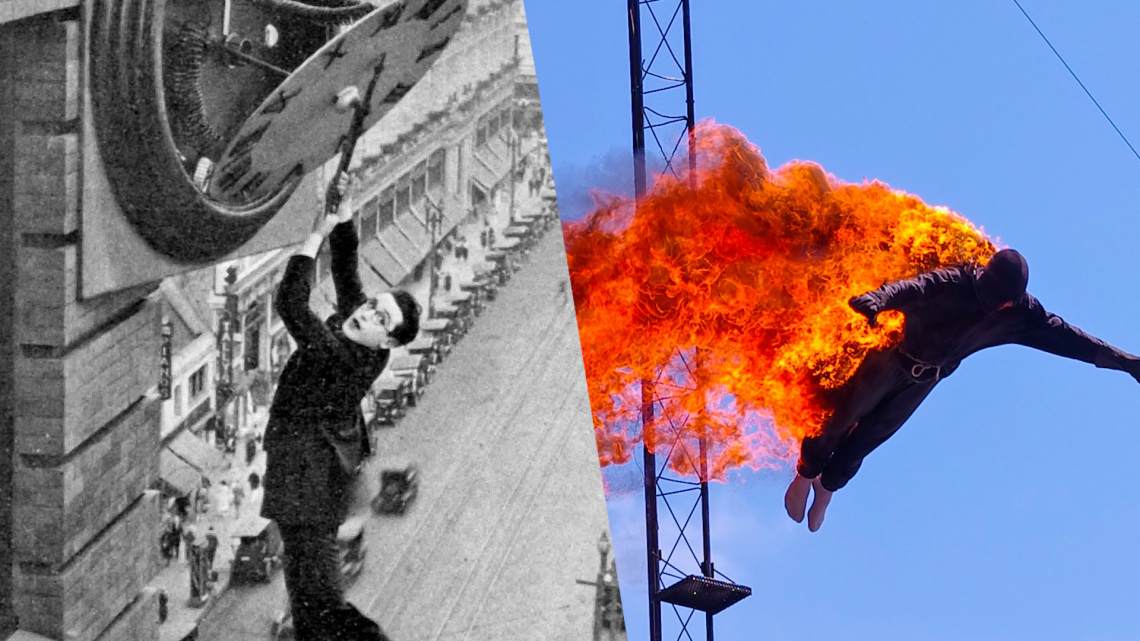 Kyle Weishaar is ready to jump out of a helicopter.

The 34-year-old is more than 70 feet in the air, waiting for his cue, as he has been asked to hurl himself into the ocean, where a boat is waiting to pick him up. His heart is pumping faster than normal but he’s focused on the task. He wants to get the stunt right, wants it to look good.

Because he’s doing it all in the name of great cinema.

And of course, he also wants to survive. Can’t go back now, he thinks.

“Whenever you hear of a stunt you’re qualified for, you’re like, ‘Hell, yeah I want to do it,’” says the stunt coordinator who’s been working in Hollywood for 10 years. “But it’s exciting and nerve-wracking at the same time. There’s always a certain amount of fear involved.”

And for Weishaar, who admits to having a “healthy fear of heights,” these kinds of stunts can be tricky. He wants to make sure he’s focused, and not too excited, because too much adrenaline can be a bad thing in this job. It can make people sloppy, which gets people hurt.

But the Kentucky native keeps his cool, makes his jump and nails the scene. In doing so, he survives the process and will go on to work another day.

“That’s the job,” he says. “You jump out of helicopters. You get thrown around. You get lit on fire. And you want to come back and do it some more.” 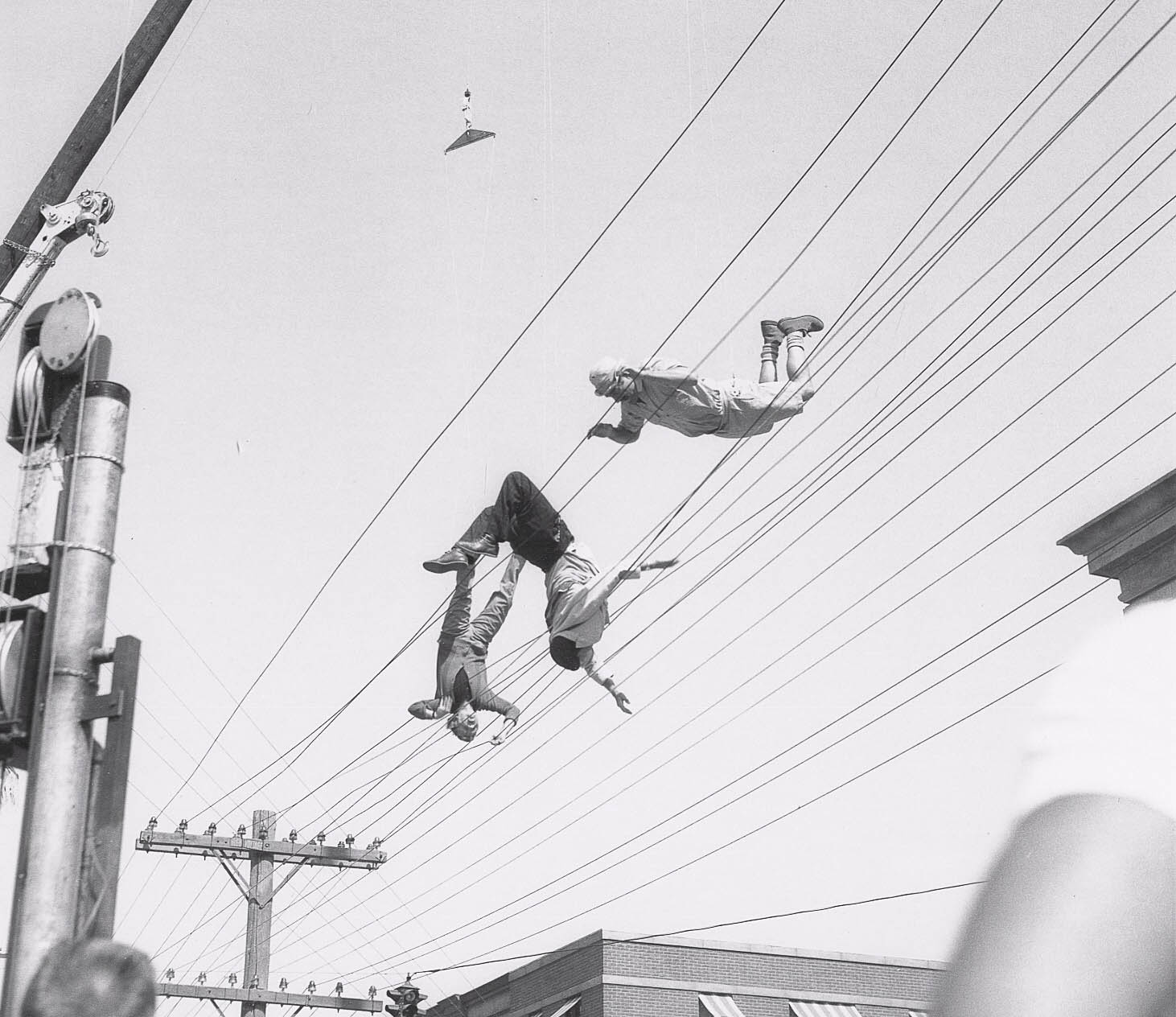 For more than 100 years, stuntworkers have been filling movies with amazing, hilarious and unbelievable scenes in the form of stunts, or—as they used to be called even as far back as the Silent Era—“gags.”

According to stuntworkers and historians alike, the industry and its workers have evolved while continuing to feature many of the same characteristics.

Weishaar is a good example. He originally went to college to major in mechanical engineering, but caught the acting bug, moved to Los Angeles and eventually utilized his athletic background in mountain climbing to become a stunt coordinator. It’s not entirely unlike the days in the early 20th century when movies were new, and casting professionals chose stuntworkers with circus backgrounds to come in and, for example, take a fall from a horse.

Now, Weishaar—who has doubled for stars like Armie Hammer and Alexander Skarsgard—has been shuttled to New York City, where he’s working on John Wick 3, starring Keanu Reeves. Weishaar is a student of the history of stuntwork, and he knows there are some aspects of the profession that will still surprise and amaze.

“It was definitely more dangerous back when it all began,” he says. “We know a lot more about technology, about movement and stunts, now than we used to. But make no mistake—it’s still dangerous.” 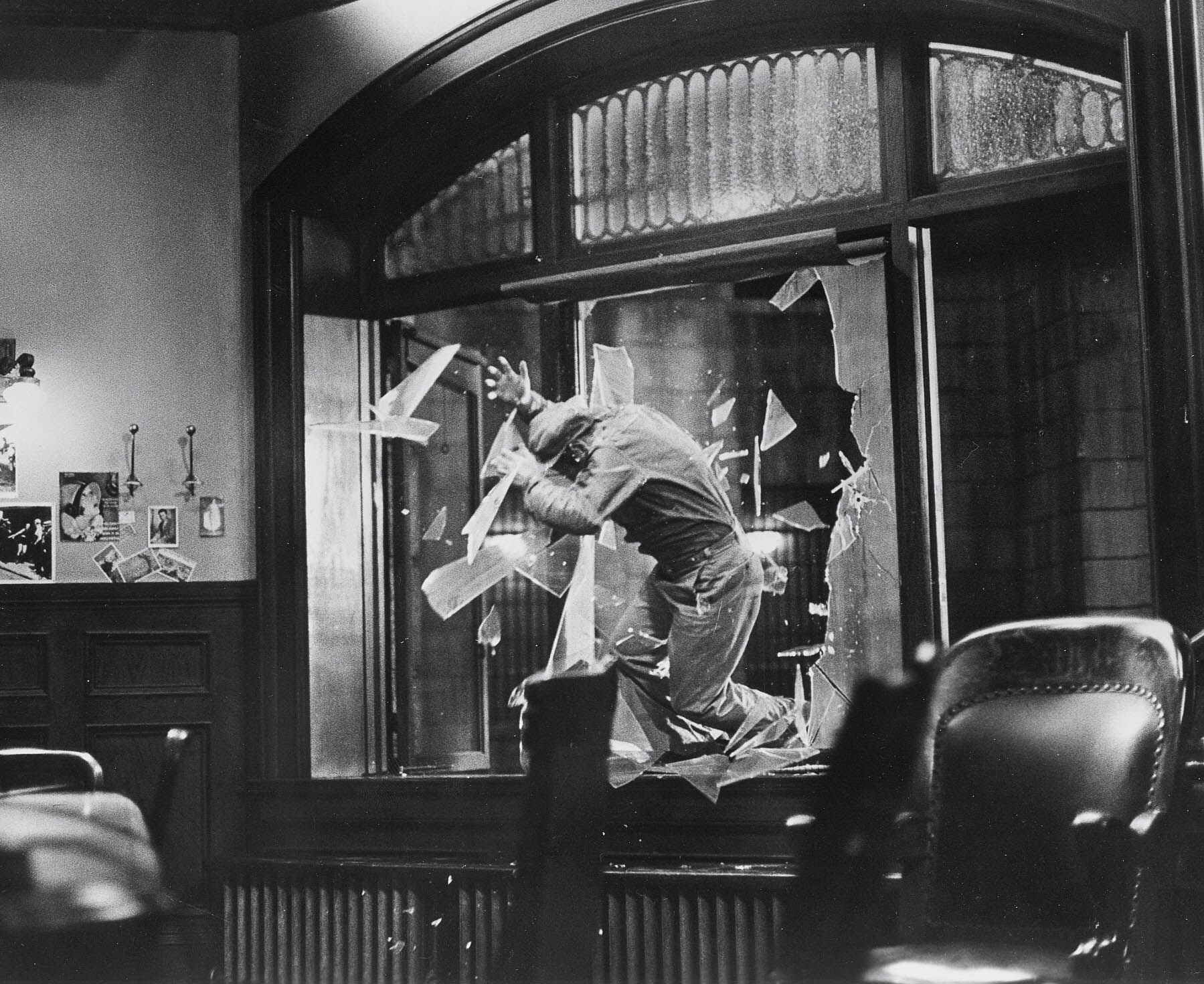 Because the more the industry changes, the more it stays the same. Author Mollie Gregory can tell you that.

Gregory was sitting in her Los Angeles home when a woman knocked on her door and asked her to sign a copy of her latest book. The visitor happened to be a stuntwoman, and the two began talking about the profession. It soon became clear to Gregory she needed to write about the industry, and especially the history of female stuntworkers.

In the book Gregory describes the Silent Era days when movies had just begun, and how those who could not get hired anywhere else—like Jews, immigrants, and women—could come to Hollywood and find work. By 1916, women were finding work as actresses and stuntworkers, starring in popular serials that changed the world of cinema.

“No one knew if movies would make any money,” she says. “But these serials were so popular, movies did start making money. Then the companies knew what they had.”

By 1930, the world of stuntpeople and movies began to change. Men took over, stunting for both men and women, and stunts became the focal point of cinema—the “engines,” as Gregory calls them. Simply, people came to watch what the stuntmen could do, and just as quickly, women were phased out.

The era of the stuntman began. 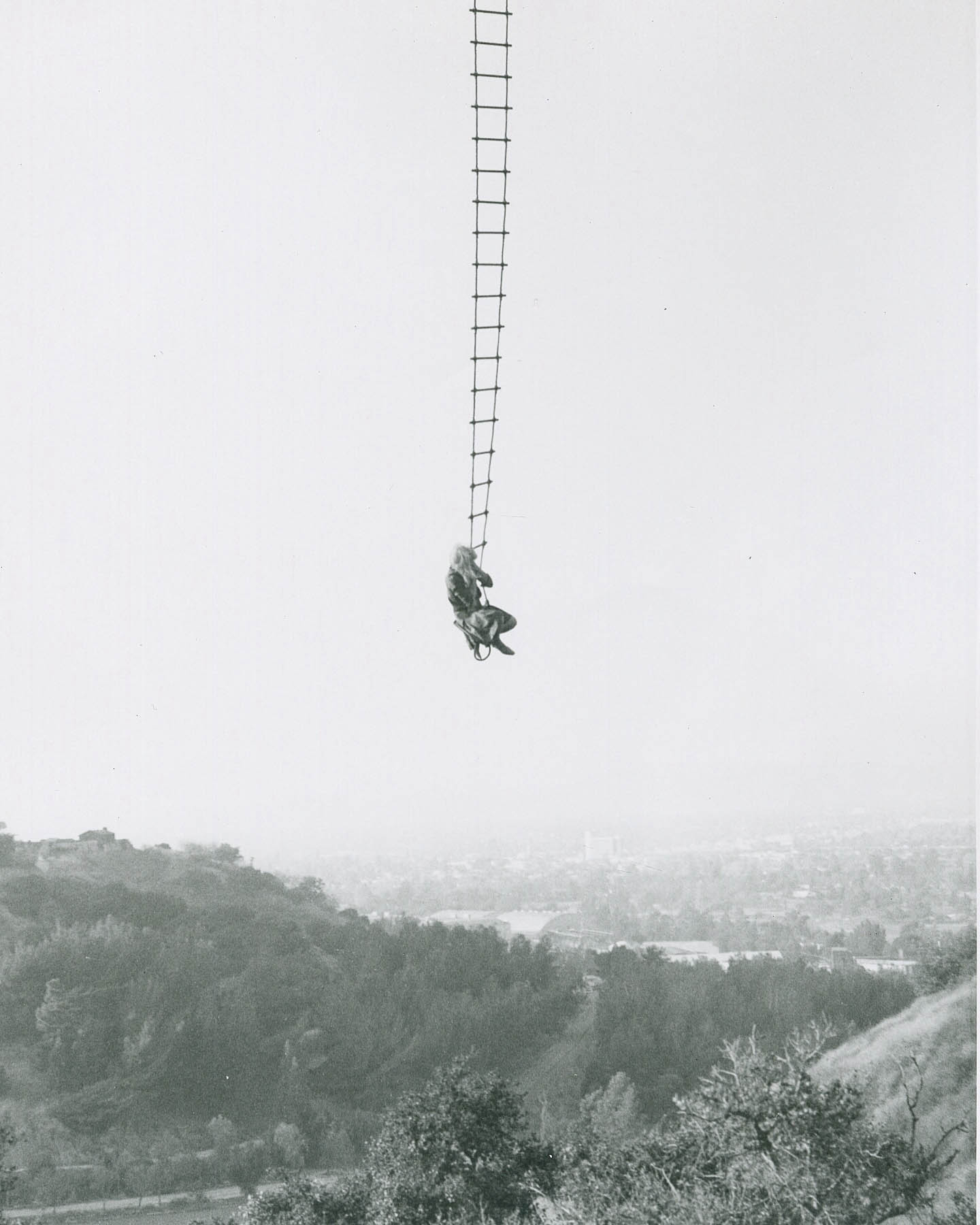 Sailing… with North Hollywood Federal in the far distance.

“This is an absolutely unique line of work,” Gregory says. “In the early days, movies were new. Planes were new. Everything was new. No one knew really what they were doing. There were no basic safety regulations. No one knew if a stunt would work until they tried it.”

Highlighting the danger, Gregory reported that in 1918-19, there were 1,052 temporary injuries among stuntpeople—and three deaths. “That’s a pretty high number of incidents,” she says.

Some of those who tried would become legendary names. Buster Keaton. Yakima Canutt. Harvey Parry. Hal Needham. Dar Robinson. Vic Armstrong. And as their stars shone ever brighter over the decades, more people came to California looking to become the next great stuntman.

Jesse Wayne was ready to run in front of the train.

But he had to be careful. The train would be running, too—at 30 miles per hour.

Doubling for 12-year-old Kurt Russell, the petite Jesse had to run in front of the train just as those chasing him—which included Ed Asner—get cut off by it.

“I decided to time it, and I figured one thing,” says Wayne, now 77 and living in Billings, Montana. “I decided I would much rather jump too soon rather than too late.”

It would sum up his career perfectly. Wayne, who doubled for actors and actresses for more than 40 years in Hollywood, has appeared in more than 500 television shows and feature films. He remembers watching Disney’s Song of the South as a child in 1946 and describes his career in the autobiographical Confessions of a Hollywood Stunt Man. “That was when I knew I wanted to be in showbiz,” he says.

A natural athlete who practiced gymnastics, he worked in television for years, but by 1969 he was in Hollywood doubling for Mickey Rooney.

There, he did it all. He fought. He leaped from tall buildings. He set himself on fire. Once he even suffered second-degree burns when a special effects coordinator lit him before lighting the rest of the room. But he feels lucky to have made it out in one piece.

“Most stunt people believe in guardian angels,” he says. “I sure do. You know, once I had to jump from one building to another over an alley. You just hoped you made it. You do it, and you come back another day.”

By 1970, women began to again fight for inclusion into the stunt world, and slowly, they formed their own legendary names. Wendy Leech. Michelle Yeoh. Tammie Baird. 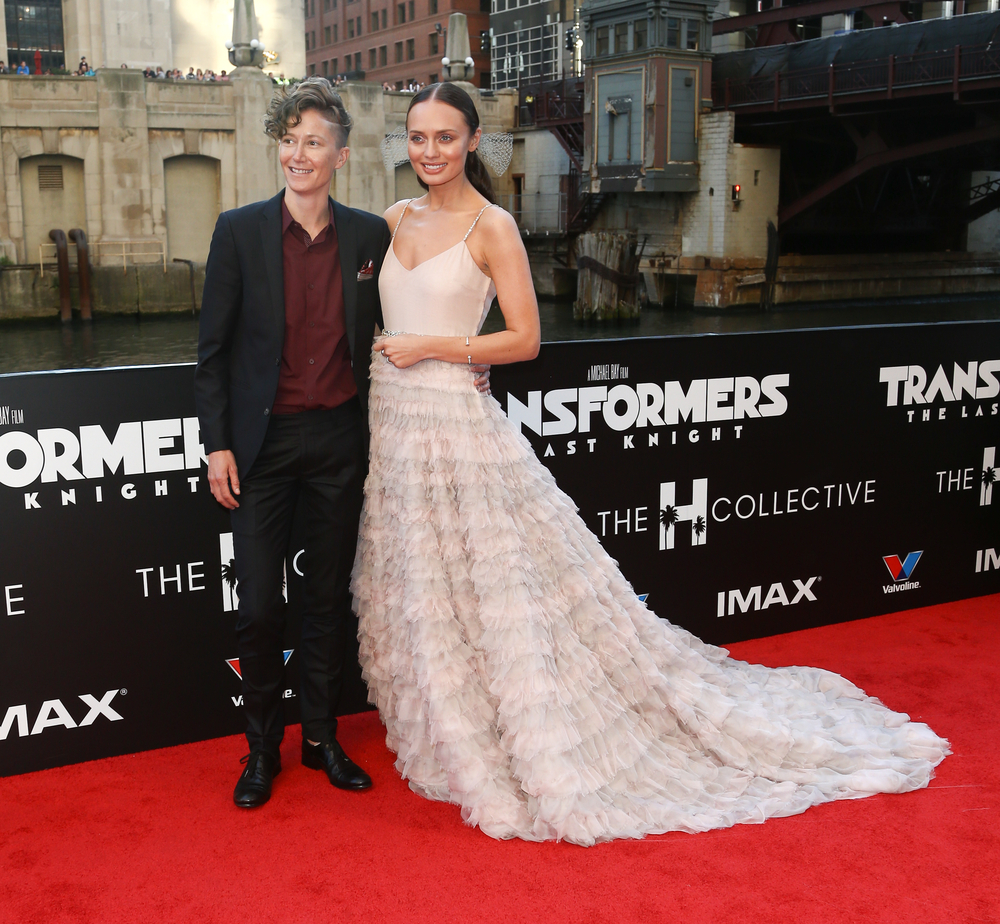 More and more men and women made their way to Hollywood to become stuntpeople.

Still, the question remained: Why would they really want to?

Greg Fitzpatrick stops to think when he considers the question.

“I just don’t know about it,” he says. “You asked what my ’Claim to fame’ is. That’s not the best way to put it. I’m actually being someone else, so it’s not really mine.”

But Fitzpatrick himself actually has many claims to fame. He has been a stuntman in Hollywood for more than 20 years. He has doubled Robert Downey Jr. in Iron Man and Ben Stiller for most of his career.

The former athlete has risen to the heights of his profession, but he realizes that as a stuntman, he must be unseen. It’s an irony that doesn’t escape him.

“We’re anonymous,” he says. “We’re only recognized within our industry.”

He has jumped from tall buildings and jumped into water. He has won two World Stunt Awards. But he has also seen numerous friends injured or killed in this business over the years.

So why continue to do it?

“It’s really cool,” he says, laughing. “I love to perform. I’m an athlete, and it’s like being a professional athlete. But there are very few times when I’m not frightened doing what I do.”

“You do it because it’s in your blood,” Fitzpatrick says.

Gregory agrees. “It’s about guts and attitude,” she says. “In the beginning, it was a trial and error process that, if you had the guts to try it, you could be famous.”

Slowly, the industry has turned back around, becoming more open to safety and stuntwomen. More female action roles have led to more female stuntwork. “We’ve got a ways to go, but we’re progressing,” Gregory says.

Yet again, as much as things change, from technology to safety, many things in stuntwork remain the same. And after more than 100 years, one thing will always be certain.

“Or course, it’s still very dangerous,” Fitzpatrick says. “And it always will be.”

Previous post Idaho Relocated Beavers By Parachuting Them From Planes