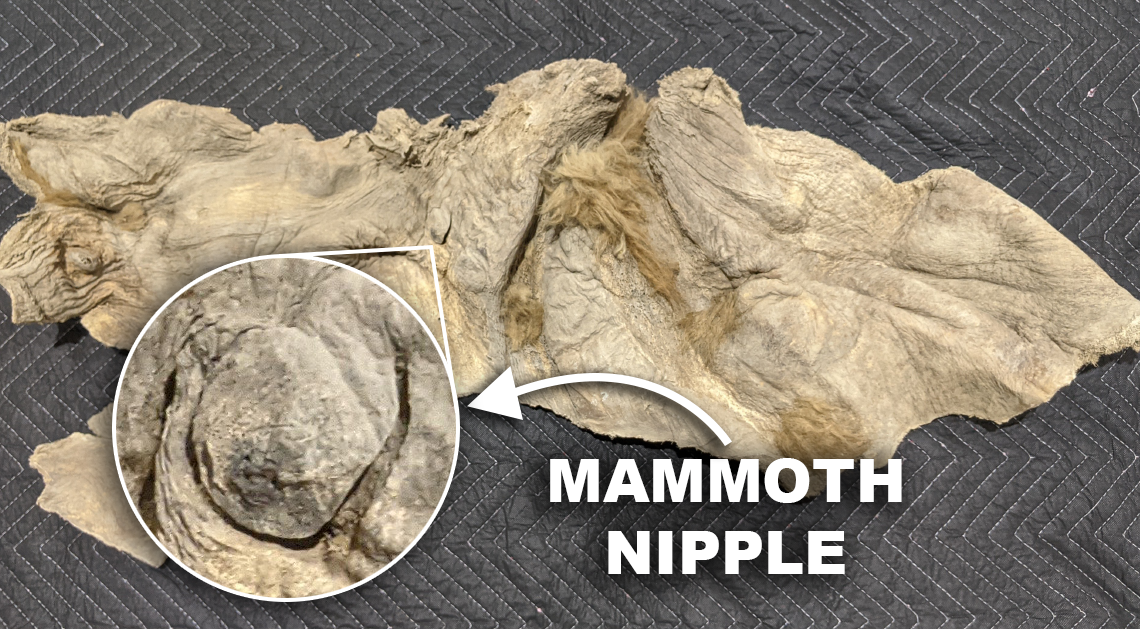 Over the past few years, many incredible discoveries have been made permitting us to reconstruct the daily lives of Ice Age mammoths. These include research into the stories written via chemicals in woolly mammoths’ tusks, per National Geographic. Matthew Wooller of the University of Alaska Fairbanks explains, “The tip of the tusk is the young mammoth. The base of the tusk is the old mammoth. Everything in between is the mammoth’s lifetime.”

But the fascinating insights into the lives of these incredible creatures of the past don’t end there. For example, the Waco Mammoth National Monument in Texas has provided researchers their first glimpses into a woolly mammoth nursery herd. By exploring the site, scientists have gained new information about these ancient pachyderms’ social structure and habits. Adding to our understanding of how these animals lived and raised young is a rare find of three preserved mammoth pieces, including a nipple, recently acquired by Ripley’s.

Here’s what you need to know about these pieces and other exciting research changing our views about life as a woolly mammoth.

The Daily Lives of Mammoths

Woolly mammoths flourished in Asia, North America, and Europe between 300,000 and 10,000 years ago. But the last group of these hairy pachyderms still existed in 1650 B.C. That’s more than a 1,000 years after the pyramids at Giza were constructed! This timeline coincided with much colder times on planet Earth.

Approximately 200,000 years ago, snow and ice sheets covered much of the planet, making for inhospitable temperatures that fur-covered creatures could appreciate. Paleontological evidence demonstrates these gentle giants stood roughly 13 feet tall, similar to the size of African elephants today.

Experiences in a Mammoth Nursery Herd

Woolly mammoths foraged for food on the cold tundra of Asia, Europe, and North America, digging beneath layers of snow and ice with their tusks. These tusks could reach upwards of 15 feet long permitting them to find grasses and shrubs buried deep beneath the permafrost. 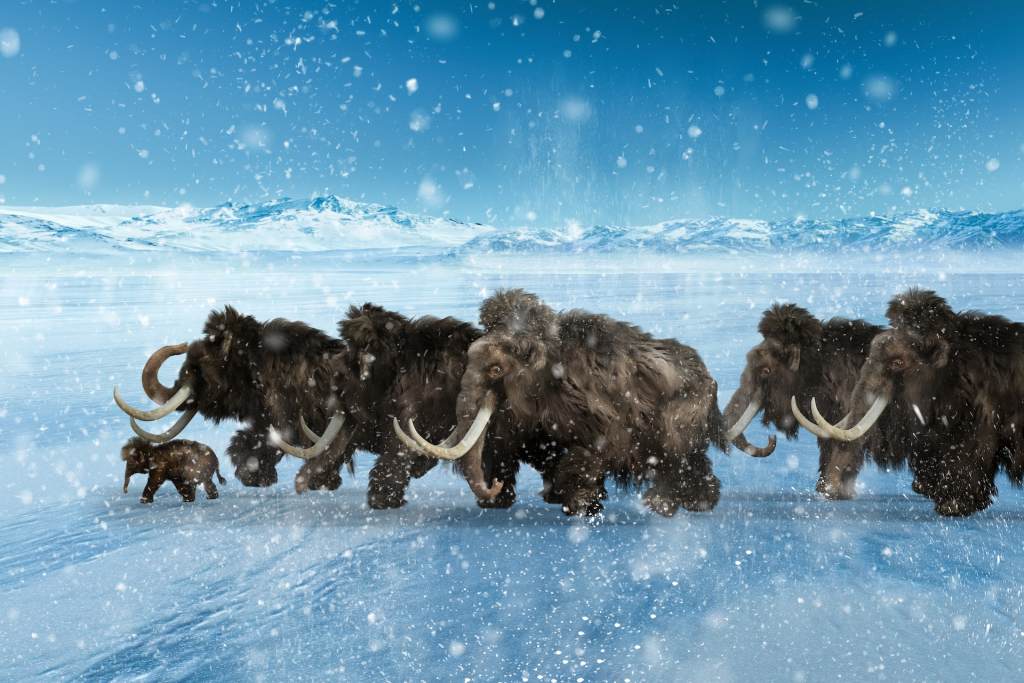 A heard of mammoths trucking through icy terrain.

Woolly mammoths gave birth and cared for one calf at a time like elephants do today. As social creatures, they banded together in groups of up to 15 individuals, with male juvenile mammoths remaining with the herd up to the age of ten. Large groupings of mammoths made it easier to keep terrifying Ice Age predators at bay, translating into significant longevity. Researchers have discovered females in these herds could easily live up to 75 years, whereas lone males rarely made it past their 40s, as reported by the National Park Service.

A Window into the Past

Like other mammals, mammoths gave birth to live babies they nursed. Once a calf’s teeth developed, it began foraging like grown-ups. In the case of modern-day elephants, babies usually nurse for about six months before making the transition to solid foods.

The highly sought-after preserved mammoth remains acquired by Ripley’s — two large pieces of skin and a leg — originated in Siberia. Due to increased temperatures, glaciers have receded in recent years, revealing incredible finds like the preserved mammoth nipple. These samples were sent for testing at the Curt-Engelhorn-Center of Archaeometry. The Center used radiocarbon dating (14C) to determine the frozen fossils dated to roughly 49,000 years ago! 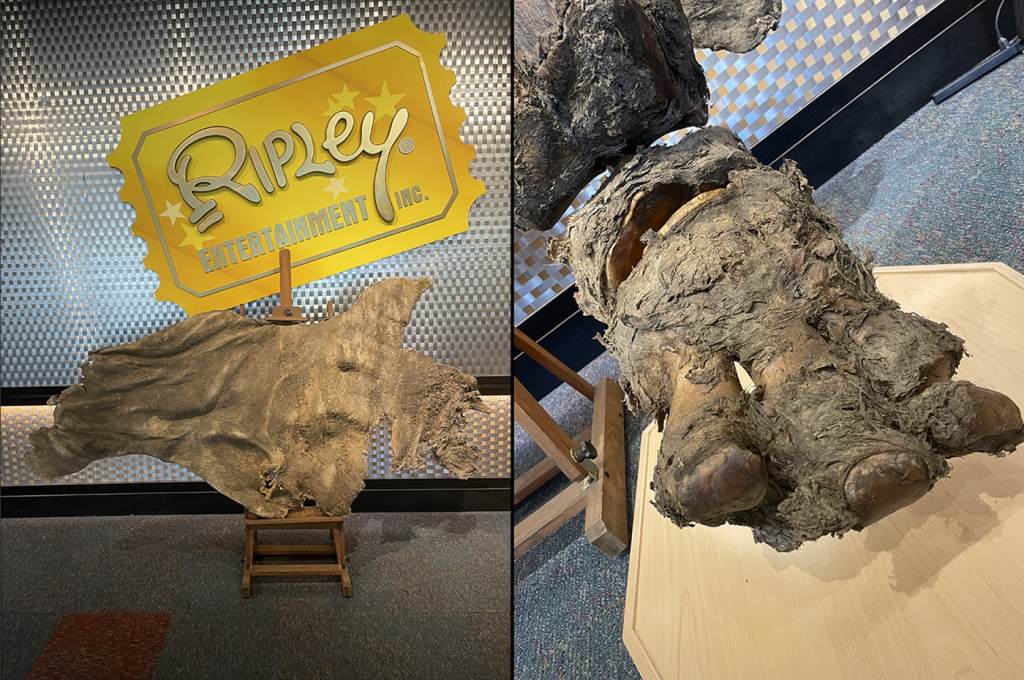 How does this testing work? Throughout an animal’s life, it assimilates carbon-14 from the atmosphere. But when it dies, this exchange comes to an abrupt halt, and then carbon-14 leaves the remains at a rate determined by radioactive decay. By measuring the amount of carbon-14 present in the samples and then comparing it to an international standard, researchers can estimate each piece’s age. We’ll keep you posted as more information surfaces about these one-of-a-kind discoveries and what they tell us about the Ice Age, its mammoths, and its ecosystems.

Previous post That Time A Scientist Dug Secret Tunnels Under D.C. For Exercise