Their golden eagles can dive at an impressive 200 miles per hour. 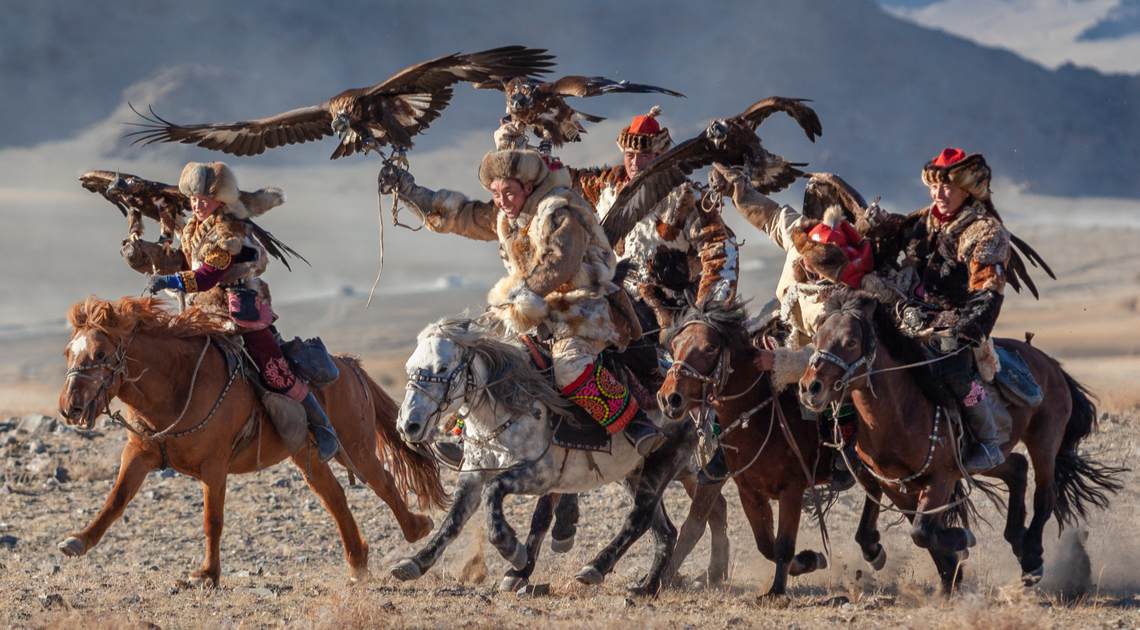 In Mongolia, the Kazakh burkitshi (or eagle hunters) hunt using eagles while riding on horseback. It’s a tradition that has been passed down through the generations. As one eagle hunter told the New York Times, “All Kazakhs love to train eagles. Now we keep eagles mostly because it’s a traditional sport.”

The eagle hunters, who are typically male, share a strong bond with their birds of prey. For example, they feed off of each other emotionally, according to another burkitshi: “If my eagle feels bad, I feel bad,” he explained. “If she’s happy, I’m happy. When we go to the mountains, we share everything together.” 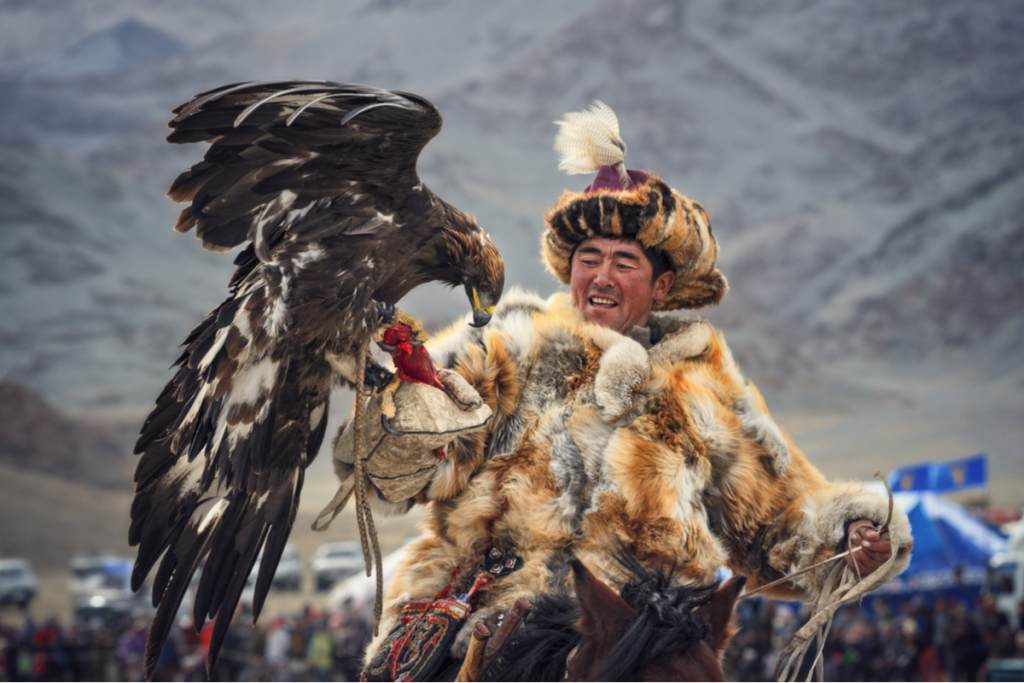 The eagle hunters allow tourists and visitors to witness their ancient practice, which helps support them financially. The Golden Eagle Festival, for example, takes place in the Bayan-Ölgii province every year in October, and it also serves as a way for the Kazakhs to present their culture to others and pass down their heritage to their children and grandchildren.

The Kazakhs have been using eagles for hunting for thousands of years. There are cave paintings from the Bronze Age that refer to falconry, and Genghis Khan reportedly supported the practice. In addition, Marco Polo mentioned eagle hunting with Khan’s grandson in the 1100s, according to Responsible Travel.

The burkitshi wear fur coats to stay warm in sub-zero temperatures, and their golden eagles fly an impressive 200 miles per hour, according to Forbes. During the Golden Eagle Festival, the best of the best competes in a variety of divisions to demonstrate their eagles’ speed, agility, and accuracy. 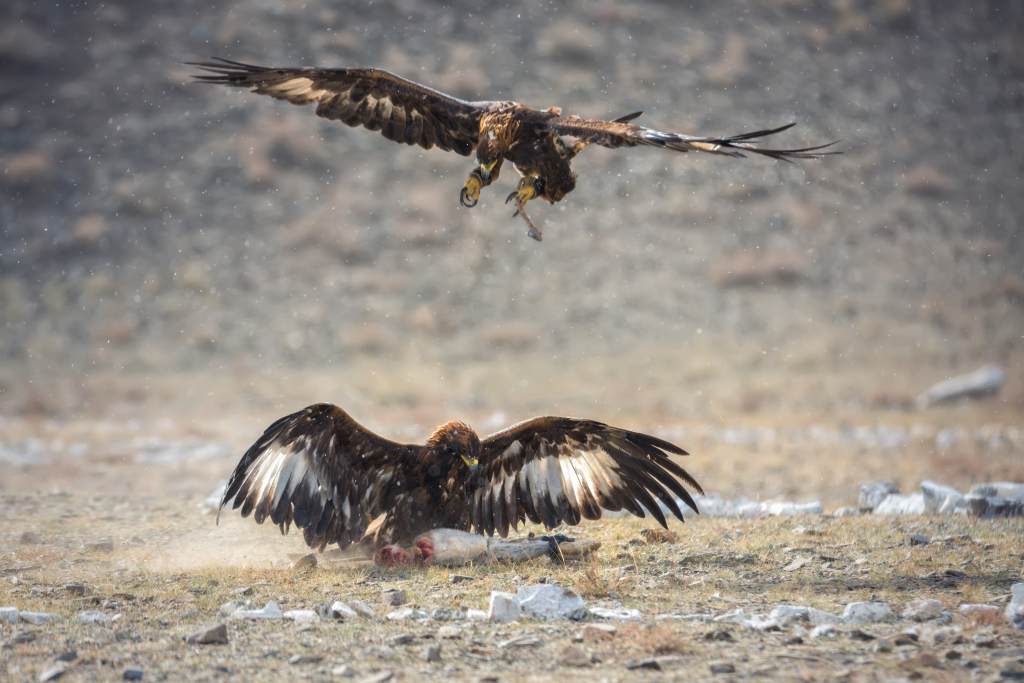 Sponsored by the Mongolian Eagle Hunters’ Association, the Golden Eagle Festival begins with 70 to 80 participants who ride horses while holding eagles on their arms, according to travel agency View Mongolia. Many of these eagle hunters travel from long distances in this manner to attend the event. Judges rank participants by their Kazakh costumes’ intricacy, the elegance of their eagles in flight, horsemanship, and nuances in skill.

Golden eagles are known for their excellent eyesight, fast flying, and sharp talons. They are able to see small movements from long distances. Female golden eagles are the preferred gender for this ancient tradition. They have larger bodies, weigh more than the males, and are given a special support so they can perch comfortably on the saddle while on horseback. All of the eagles have names, and after six or seven years, the Kazakhs release them into the wild.

While men traditionally train the eagles, the occasional nine or 10-year-old boy is also seen taking part in the practice. In addition, some girls and women also participate, including a teenager named Aishlopan Nurgaiv, who has won against male adult hunters during the Golden Eagle Festival. 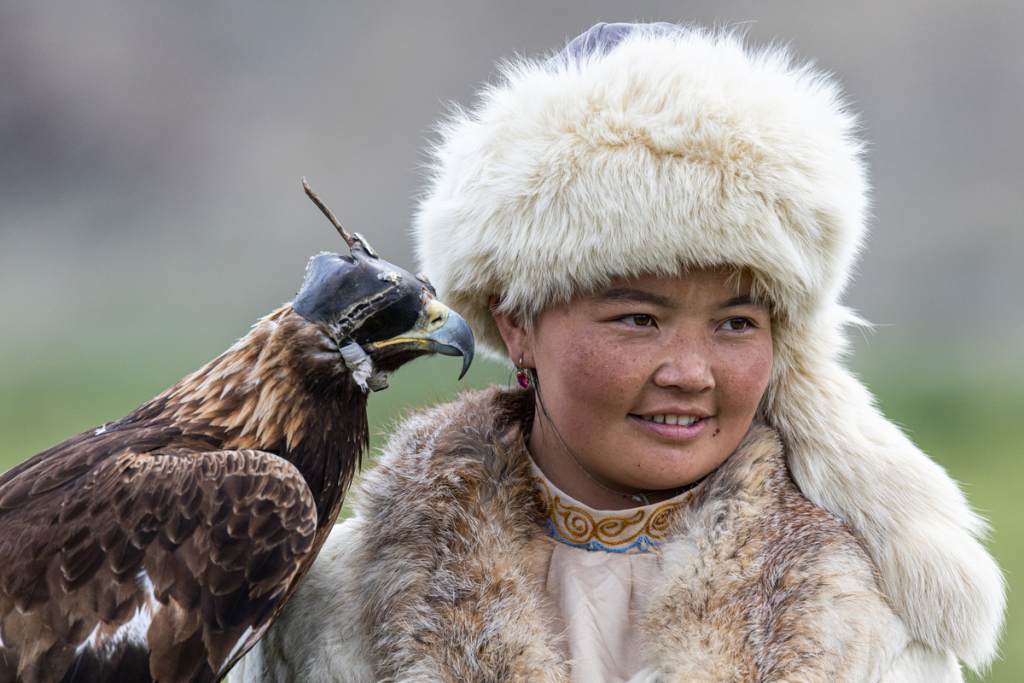 Director Otto Bell, who helmed the documentary The Eagle Huntress about Aishlopan, told National Geographic of the ancient tradition: “There are generally accepted to be only around 250 practicing eagle hunters left in the world and most of those are concentrated in Aisholpan’s corner of the Altai Mountains.”

He noted how tough Aishlopan was while his crew was filming because she had no problem carrying a 15-pound eagle through -50-degree temperatures through large snow drifts. He commented that she was “the first Mongolian female to compete at the Golden Eagle Festival in Ölgii. And she’s the first woman in 12 generations of her own family line to commit to the process of becoming a master eagle hunter.”

Find the burkitshi of Mongolia and explore other cultures from around the world inside our latest book, Ripley’s Believe It or Not! Out of the Box.

Next post Rare Phenomenon Makes It Rain Fish On Texas

Previous post Retrofuturism: Where We Thought We’d Be Vs. Where We Are