Can You Hear Her? La Llorona Is Calling Your Name!

Have no fear. Mommy is here! 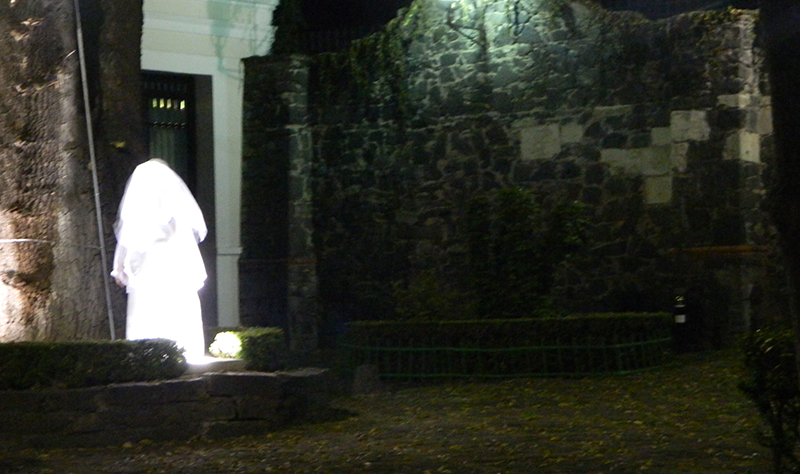 You can hear a woman’s wails echoing as you pace your way through the forest. Unsure of how to escape the piercing shrieks, you find yourself glaring at an enchanting manifestation. There she stands, with perfectly smooth black hair, in a white mesh dress and a tattered lace veil, hauntingly luring you in with her gaze. Suddenly, without hesitation, you’re running for your life as she floats in your direction because she wants to drag you to hell with her.

You should have listened to your mother when she said staying out past your bedtime would lend you some heavy trouble. You never want to be confronted by La Llorona (The Weeping Woman).

Yes, we’ve all been plagued by the familiar stories of the boogie man finding its way to get you because you’re out past your curfew. These stories have paved the way for discipline and some scary movies. However, there’s nothing more frightening than knowing the one thing you shouldn’t fear, you do: your mother.

“Mommy Dearest” anyone? We think La Llorona might be scarier… 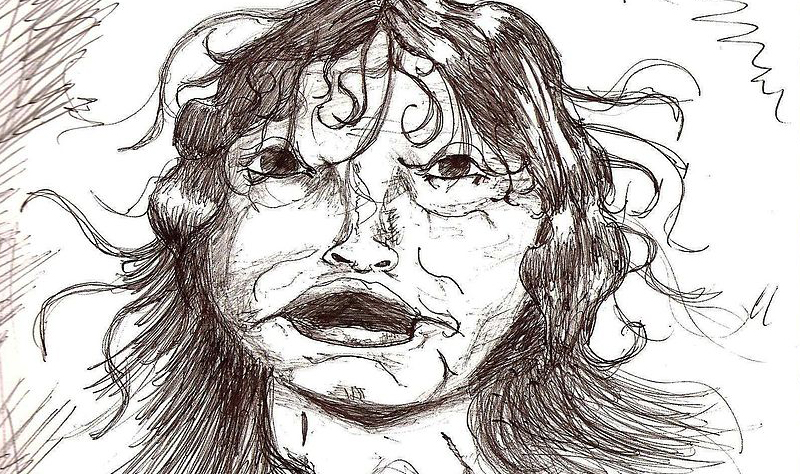 Believe it or not, there are many variations of La Llorona. The 500-year-old ghost story typically starts with the most beautiful women in the world or Mexico—where the story originates. Otherwise known as Maria, this enchantress loves to flaunt her assets and use her charm to obtain what she wants. It’s no wonder she landed herself the most eligible and wealthiest bachelor in town.

After birthing two boys, Maria’s husband grew bored of her. He would leave her months at a time, and never hid the fact that he was ultimately choosing to live his life as a womanizer. With time, Maria grew tired of his games and blamed her two boys for the end of her marriage.

One night, Maria took a stroll down the river with her children. Suddenly, her husband appeared with a younger woman in his carriage. He was upset to find that Maria had taken the boys to such an unsafe place. With conviction, Maria’s husband demanded that the boys get on the carriage and leave this place at once. It was then Maria noticed her husband was officially leaving her and taking the kids too. She became enraged as she realized her two boys had the love she yearned for.

Anger took over, and she seized the boys and threw them into the river. Realizing what she had done, Maria went running along the stream in hopes that she could rescue her boys. It was too late.

According to legend, Maria roamed the river banks for months. With time, her white gown began to soil and deteriorate, gaining her the horrifying signature look. Maria also refused to eat and spent the rest of her days weeping. Hence her name, La Llorona, “The Weeping Woman”. 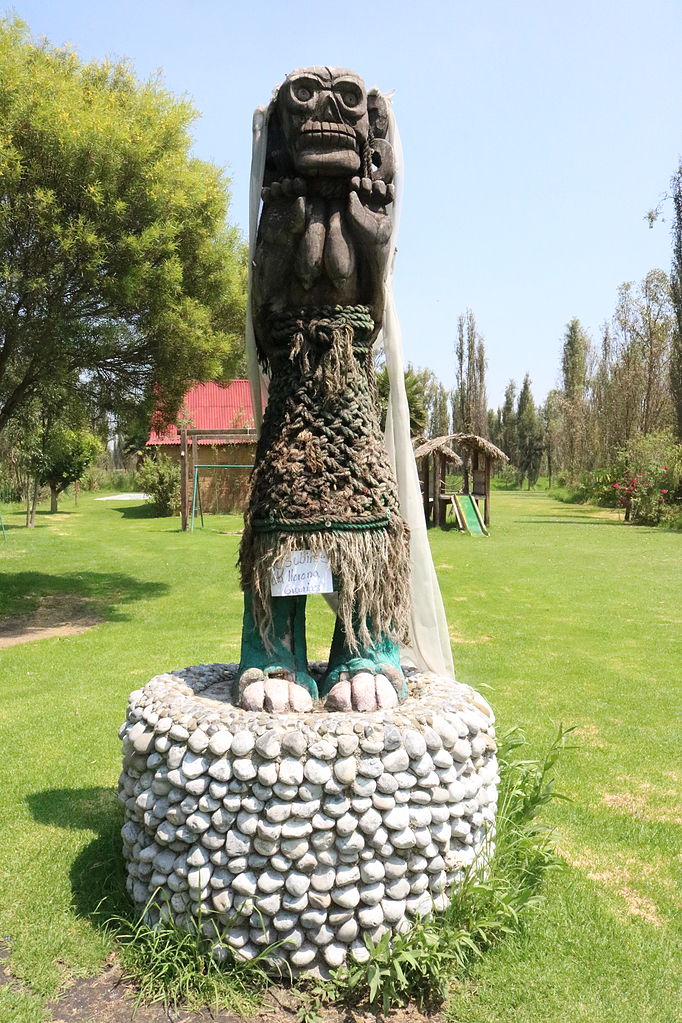 Rumor has it that you can sill hear her restless spirit weeping and still mourning the loss of her children around the banks of the Santa Fe River.

Other’s claim to see her spirit in a creek between Mora and Guadalupita, New Mexico.

Without a doubt, this story has become a legend throughout the Hispanic culture. It’s mostly been used to warn children not to stay out late or wander off.

La Llorona has been interpreted in some movies and even haunted houses during Halloween Horror Nights.

It’s been said that you can hear La Llorona screaming for her children near the famous island “La Isla de Las Muñecas“. Locals insist Maria killed the young girl that was found floating along the river by Don Julian Santana who created the doll shrine for the child.

It looks like La Llorona folklore might be inspired by ancient Greek mythology. Remember Zeus’ affair with Lamia? It was said that when Hera discovered them, she forced Lamia to eat her children, condemning the demigoddess to devour any child she could find.

“At the age of seven, I was attending the new Pajarito School in the South Valley of Albuquerque, New Mexico. I loved attending the Pajarito School, especially when it was time to play outside in the schoolyard. Surrounding the playground was a high fence to keep the children from wandering off. Behind the fence was an irrigation ditch that fed an alfalfa field on the other side of the trench. In the high, arid lands surrounding Albuquerque, it seemed as if there were ditches everywhere, watering the fields beyond the city.

Soon, we met a little boy who was not yet old enough to attend school. He would often come and play by the fence and watch as the older children frolicked in the schoolyard. But, one day our play was interrupted by a big commotion near the schoolyard fence. As we ran towards the fence, we soon discovered that the little boy had fallen into the irrigation ditch. Though one of our teachers pulled the boy from the muddy water and began resuscitation efforts, it was too late. That was the first time I had ever experienced the loss of a friend.

The next day at school, one of the children told me that La Llorona had gotten the boy. I could only stand there speechless, having never heard of La Llorona. They explained that she was the “ditch lady” that wandered up and down the ditches looking for little kids to “steal” because her children had drowned in a terrible accident. That frightened me because right outside my back door were two of these muddy trenches. On cloudy days we could imagine her ascending from the heavens to take her place along the irrigation ditches.”

Submitted By: By Reverend Elizabeth Kirkwood via Legends of America.

“When I was in the seventh grade, I had a frightening dream. I saw myself standing on a dark road with the only illumination coming from a dim streetlight. The ground was wet, and in the distance, I could hear the sound of rain falling and the tap, tap, tapping of footsteps coming toward me. Peering into the darkness, I could make out a woman, dressed all in black with a dark lacy veil covering her face, moving toward me. Strangely, as the mysterious woman grew closer, so did the rain.

When the woman was about 15 feet in front of me, she looked over my shoulder. When I turned around to see what she was looking at, I saw a young child dressed in a white nightgown playing with a doll in the middle of a puddle of water. When I turned back to her, she was right in front of me. The veil was lifted, her eyes were abnormally wide, and her face was no more than three inches away from mine. Her terrifying eyes stared into mine dead on until I awoke in a panic. I looked toward the window – it was raining. As you can imagine, I didn’t sleep for the rest of the night.

The next day, I shook off the dream and thought nothing more about it, until a year later. On that night, I was spending the night with my friend Veronica, who had also invited another friend named Sarah. In the course of the evening, Sarah, who is Hispanic, began to tell us some of the legends and ghost stories of the Mexican culture. When she began to tell the tale of La Llorona, I didn’t think anything of it at first. Then she began to tell of how the legendary spirit travels by water, dressed all in black or white and is almost always seen wearing a veil. Sarah continued by telling us that La Llorona lifts her veil only to her “victims,” that in their afterlife, she has chosen to help her find the bones of her lost children.

Now, I constantly wonder if, in my afterlife, I will be forced to help her find the bones of her lost children.”

Submitted By: Tonia Apelar of Eureka, California via Legends of America.

Have you seen La Llorona? Let us know in the comments below. We are dying to know!

Next post Reg Spiers: The Man Who Shipped Himself Home in a Box