The pie pan had to be custom made in a metal-working shop. 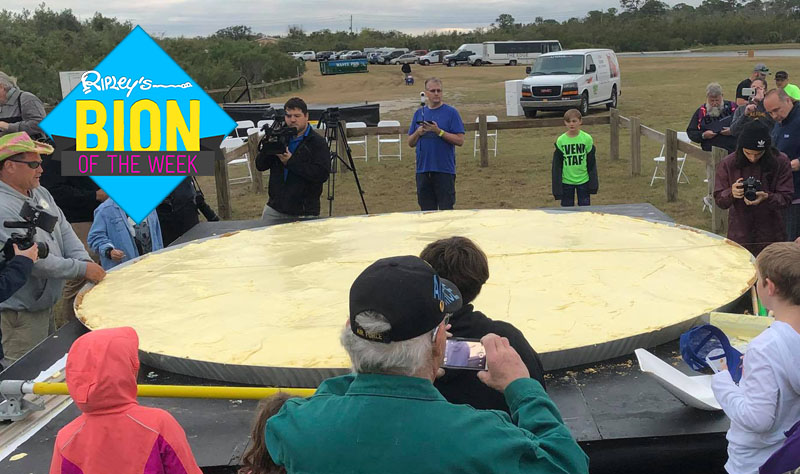 Too Cold for Mercury

A tourist center for the fictional Klingon race is planned to open in Stockholm. Made famous by their antagonistic role in the Star Trek franchise, the “aliens” will be welcoming tourists. Four Klingon ambassadors—Ban’Shee, Mara, Morath, and Klag—will teach culture and give authentic martial arts reenactments before dining with guests on Gagh and blood wine.

The “Cantina Theme” from Star Wars: A New Hope has become world-famous since 1977, remixed into thousands of different variations. Dani Ochoa, a 19-year-old college student has, quite possibly, made the most unique version yet. She came up with a math equation, which—when written—plays the song.

A car jumped the median las weekend but went much higher than police normally see. It flew into the second story of a dental office. The driver walked away fine, but it took heavy construction equipment to remove the vehicle.

A car crashed into the second story of a building in Santa Ana, California, this morning. Officials say the vehicle hit the road’s center divider and went airborne.

The Key Lime Pie Company based in Cocoa Beach, Florida, made a key lime pie that weighed over 1,000 pounds! The pie was so large, that a metal-working shop had to construct a custom pie-pan to support the 12 ¼-foot dessert.

Next post Ripley's Guide to Weird Rides Around the World