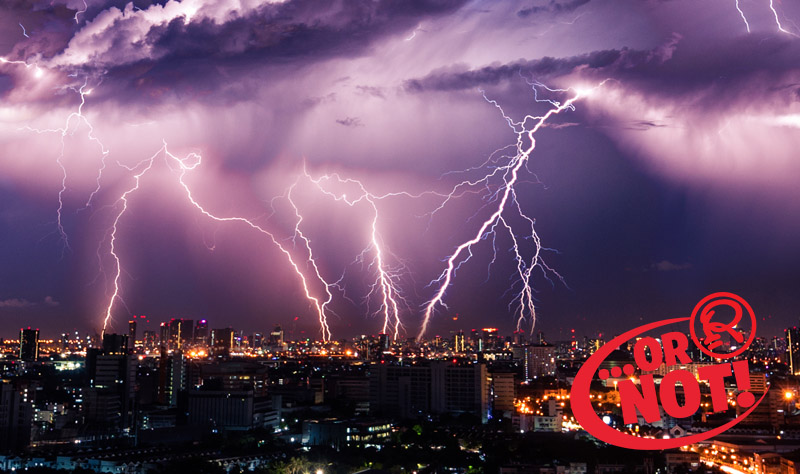 Whether it’s a bout of good luck or a reassurance against a bad thing happening again, the phrase, “lightning never strikes the same place twice” has worked its way into our lexicon as a way to characterize something as unlikely or impossible. For all our intuition, lightning seems to disagree.

Lightning can strike any location multiple times. According to storm chaser Dan Robinson, the odds are practically inevitable given enough time. When a storm’s electric charge builds up, it can discharge it to the ground in the form of a lightning bolt. Believe it or not, a bolt does nothing to change the storm itself, and as soon as it recharges, there’s nothing physically that changes the odds of lightning touching down there again.

One of the most obvious examples of lightning striking more than once is the tops of skyscrapers and towers. Cameras set up in cities have recorded lightning striking towers dozens of times across multiple years. During one night in Chicago, a thunderstorm even strikes multiple towers many times. The Sears Tower took ten strikes in that single night.

According to Robinson, tall buildings make up the majority of multi-lightning strikes. He says a tower can experience upwards of one direct strike every thirty seconds during particularly intense storms.

So lightning can irrefutably strike tall structures twice, but what if we remove inanimate objects from the equation? Can lightning strike people twice?

True to our name, we have a vast record of people who have unbelievably been struck by lightning multiple times. In fact, a person is more likely to be hit by lightning once they’ve been struck a first time. Dozens of people fit the bill, but we’ll share some of the most surprising.

Casey Wagner, a Texas rodeo clown, was struck twice during the same storm—the second strike hitting just a moment after the first. More bizarre, however, is when a person seemingly becomes cursed with lightning strikes.

Working at Shenandoah Valley National Park, Roy Sullivan was stationed atop an observation tower during a storm. The lightning rods had yet to be installed when the tower was struck seven or eight times before he decided to evacuate. On his way down, Sullivan made it only a few feet when a bolt hit him, leaving a half-inch burn down his body and destroying his big toe as it left his boot.

Sullivan’s next encounter was 27 years later when a bolt struck a tree and arced through his truck window, knocking him unconscious as his truck crashed into a ditch. He was struck a year later at home, and his wife got hit as well. Another year later, a bolt hit the guard house he was in, burning off his hair. By this time, Sullivan took storms more seriously, and drove out and away from thunder, but was still struck twice more before quitting the Park’s Service.

Next post A Killer Horoscope: The Murders of French Doctor Marcel Petiot