A wild cascade of wreckage tossed hundreds of yards in every direction.

On September 15, 1896, two locomotives hurtled at full speed into one another, 14 miles north of Waco, Texas. Their boilers exploded on impact, a wild cascade of wreckage tossed hundreds of yards in every direction. One bolt shot from the crash into the eye of an onlooker, and at least two others died from the ensuing hailstorm of jagged metal. Airborne shards of machinery disfigured countless other individuals.

But, the estimated 40,000 spectators took this in stride. Not only had they paid admission to witness the event, but they weren’t about to let the risk of death or dismemberment get in the way of a little fun. Almost from the moment the cacophony of the destroyed trains died down, the crowd charged headlong into the fray, scavenging for souvenirs amidst the sizzling wreckage. 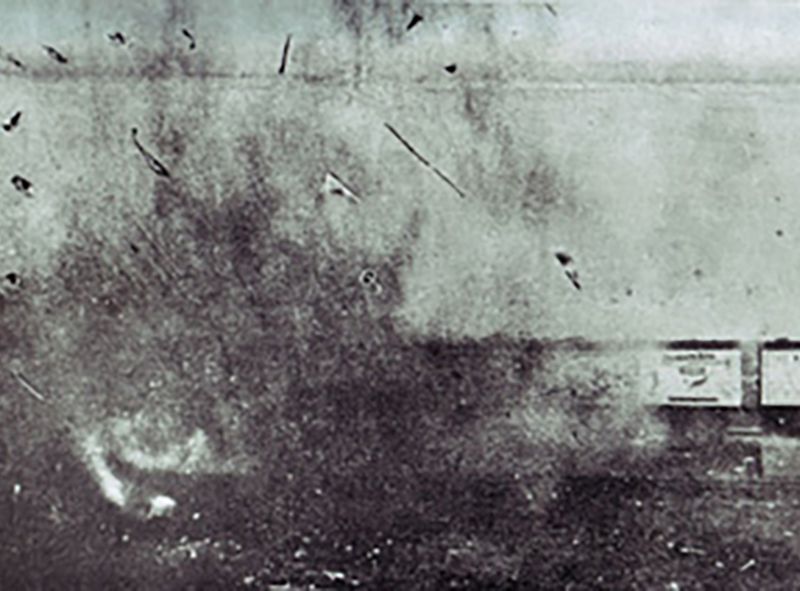 The trains hitting nose-to-nose and exploding on impact.

Believe It or Not, well before demolition derbies, live train crashing enjoyed a lengthy “moment” in America. Here’s the story behind the mayhem.

Paving the Way for the “Crash at Crush”

From 1896 until the 1930s, staged train wrecks enjoyed wild—albeit destructive—popularity. The forerunner of today’s monster truck rallies, train crashes drew tens of thousands of fans to festivals and fairs across the nation where they paid a couple of bucks to witness each main event.

The Waco crash was spearheaded by William George Crush, a passenger agent for the Missouri, Kansas & Texas Railroad (a.k.a. the MK&T or Katy). But, Crush wasn’t the first man to give this marketing ploy a try. Earlier that year, Ohio resident A.L. Streeter organized the first live train crashing event. It was later described as “the most realistic and expensive spectacle ever produced for the amusement of the American audience.” 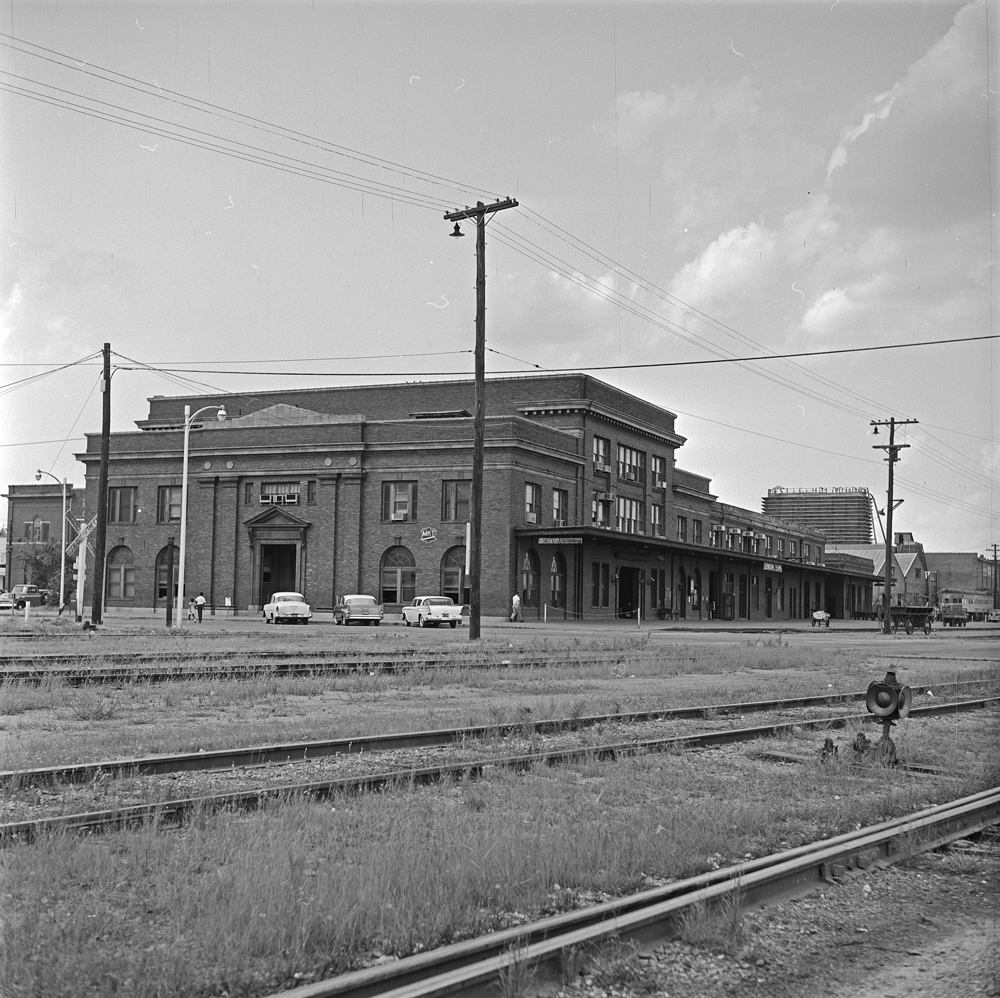 Crowds proved so enamored with Streeter’s event that six more were quickly organized, including the Texas “Crash at Crush.” To prepare for the event, MK&T laborers created a makeshift “city for a day” 15 miles north of Waco, humbly named after Crush himself.

No expense was spared to accommodate the multitude of attendees. Event organizers drilled two wells, ran pipes for spigots, brought in tanks of artesian mineral water, and set up lemonade stands. They also constructed a temporary restaurant using a tent borrowed from Crush’s friend, P.T. Barnum.

Taking inspiration from the 1893 World’s Fair, they erected a row of carnival games and sideshows like Chicago’s Midway Plaisance. The temporary construction was topped off by a 2,100-foot station platform for onlookers and a wooden jail for would-be pickpockets and trouble makers.

Many researchers believe famed Texas musician Scott Joplin attended the event because he later immortalized it in his ragtime song, “The Great Crush Collision March.”

Gilded Age America was coming off a major economic downturn, and it was hoped this publicity stunt would earn the MK&T more diehard fans. Money was made by selling $2 roundtrip train tickets to the event, as well as from the games, food, and beverages at Crush.

Even though the railroad industry dominated late-19th-century America, this came with plenty of competition. The MK&T was growing, but it needed to find ways to stay on top. Inexplicably, destroying two of its locomotives in front of the general public seemed like a good way to promote riding the line.

Considering the 19th-century fascination with bare-knuckling boxing, bear and dog fights, and public executions, maybe what followed shouldn’t come as a surprise. Passengers rode the MK&T from every corner of Texas to get in on the action. All told, 40,000 spectators filled Crush that day, making it the second-largest city in Texas.

The track at Crush measured three miles long. On one end sat engine No. 999, a 35-ton locomotive painted bright green with red trim for the event. On the other end was engine No. 1001 painted scarlet with green trim. It also measured a whopping 35 tons. Attached to each locomotive were six boxcars for added measure. 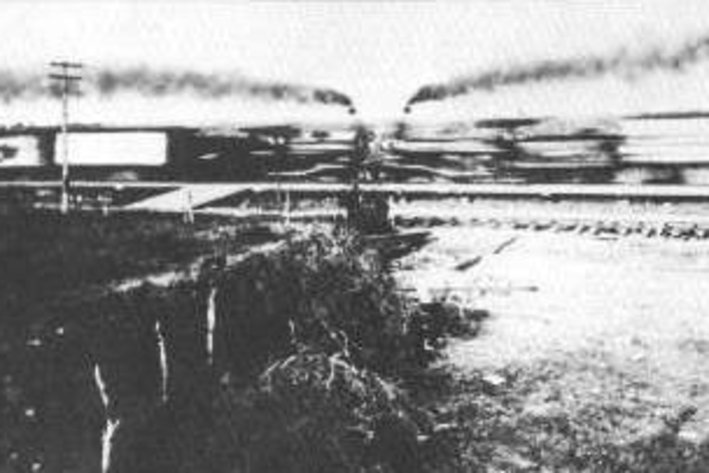 The moment of impact of the train crash show at Crush, Texas on September 15, 1896.

The so-called “duel of iron monsters” was ready to begin.

Two conductors, no doubt with guts of steel, volunteered to drive the locomotives into one another. It was their job to get the trains going at full throttle before jumping off. There was little margin for error.

All told, the trains hit at nearly 50 mph with an initial impact of between one and two million pounds of pressure. And, the boxcars added a second wave of impact.

A collection of still photographs from the event capture the eerie moment when the trains’ noses touched before disappearing into one another, a heap of twisted metal, smoke, and chaos. Despite pre-event reassurances from the MK&T’s engineers, the boilers exploded on impact sending debris in every direction. 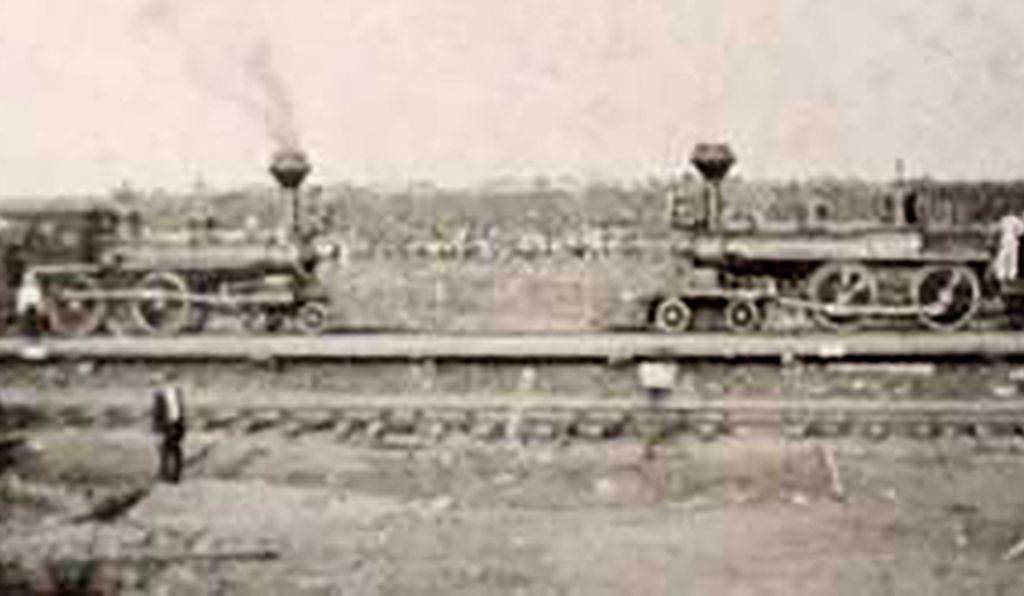 The trains facing off for the spectacle in the pop-up town of Crush, Texas.

We know at least two people died from flying debris; one man lost an eye and ended up with bolts and screws lodged in his head. No one knows how many more were disfigured and burned, especially as they scrambled atop the searing wreckage to collect souvenirs.

One thing’s for sure, nobody appreciated the gravity of the spectacle unfolding before their eyes.

The Aftermath of Crush

Some scholars argue that since steam power and train travel were such recent inventions, it would have been easy for people to underestimate their destructive capabilities. Crush certainly changed all that.

William George Crush was immediately fired by the MK&T but would be rehired the next day once the railroad company realized what a “smashing” success the publicity stunt was. Instead of dwelling on casualties, the media lauded its organizers and created a thirst for future events.

While the appeal of watching train wrecks live waned in the 1930s, movies like Unstoppable (2010) continue to play on our grim fascination with humanmade disasters. But, nothing will ever compare to the outrageous chaos of the “Collision at Crush.”

Next post Crushing It With Can Artist Noah Deledda