London Recruits Justin and Sigourney Beaver To Save City

Despite their ancestors being hunted to near-extinction, beavers have made a comeback as the key to the city’s plan to mitigate the flooding. 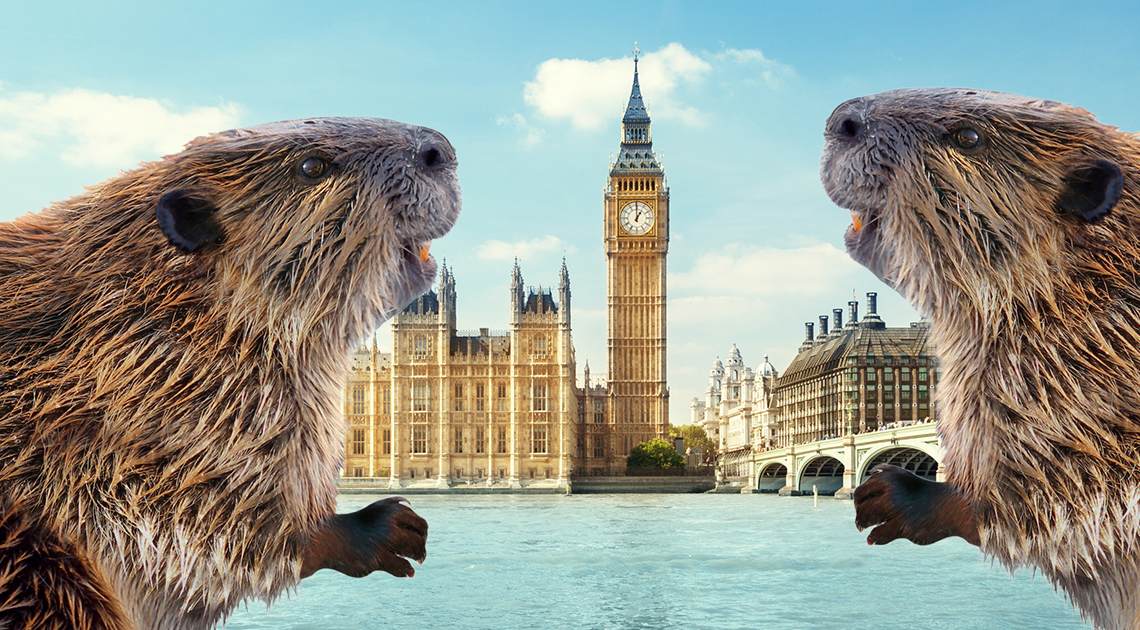 It’s been 400 years since beavers were hunted out of London, but with waters on the rise due to climate change, it’s their time to shine once more — beginning with the reintroduction of Sigourney and Justin Beaver.

March 17 marked the return of the beaver at Enfield’s Forty Hall Farm, two years after Enfield Council and London Climate Change Partnership nailed down a plan to help alleviate major flash flooding that has pained the city in recent years.

Though generally known as a rainy city, London’s downpours have gone from gloomy to grim, with LCCP’s deputy chair Bob Ward expressing concern that the city’s flood risk has turned life-threatening.

According to a July 2021 report, the city experienced more than the total month’s average rain on several individual days. Along with flooding more than 1,000 homes, the influx of water forced hospital and train station closures.

“There is now a real risk of people drowning, particularly in basement flats if a major flash flood occurred in the middle of the night,” Ward told the Observer.

From Hunted to Heroes

Despite their ancestors being hunted to near-extinction for their coats and musk during the days of Billy Shakespeare, two chosen beavers — a male from a similar project in Yorkshire and a wild Scottish female, temporarily named Justin Beaver and Sigourney Beaver — have made a comeback as the key to the city’s plan to mitigate the flooding.

We’re not sure how Hailey will feel about this, but the Council hopes Sigourney and Justin will immediately get to work making beaver babies who can help them build an empire of dams, chomp down trees, and bring some new wildlife neighbors to the area.

If all goes as planned, these new habitats will ultimately slow down and filter the wetland waters, reducing flooding downstream.

The Secretion to Success

If beavers are so usefully ecologically, why would anyone want to hunt them? To put it simply: their sweet butts!

Though less common these days, for over 80 years, the sweet secretion of the beaver was squeezed from its tushy and used in imitation vanilla, beauty products, and even whiskey.

Beaver musk is recognized as safe by the FDA, but due to the ick factor of how it’s retrieved, is typically listed as “natural flavor.”

The celebration of Justin and Sigourney’s release into the enclosure was pretty sweet itself, with London Mayor Sadiq Khan joining on the festivities with a video posted on Twitter.

Great to see @EnfieldCouncil welcome beavers to their wetlands as part of a series of projects designed to help rewild the area. 🦫

Today City Hall has awarded £600,000 from our Rewild London Fund to projects across our city that will help restore nature.pic.twitter.com/WDcNHubrob

Naturally, Justin Beaver made a splash immediately upon being released from his carrier, diving straight into his new pond. Sigourney was a bit more reserved, needing to be coaxed out before eventually entering a shallow stream and making way to meet her new beau.

For all you Beav-lievers out there, there are plans for a public “beaver cam” to go live once the duo has had time to bond.

Next post The Good And The Gross Of Jiggly Gelatin Salads