Over the past four decades, Metallica has become the biggest name in metal. One fan even created a toilet in the shape of the band's drummer. 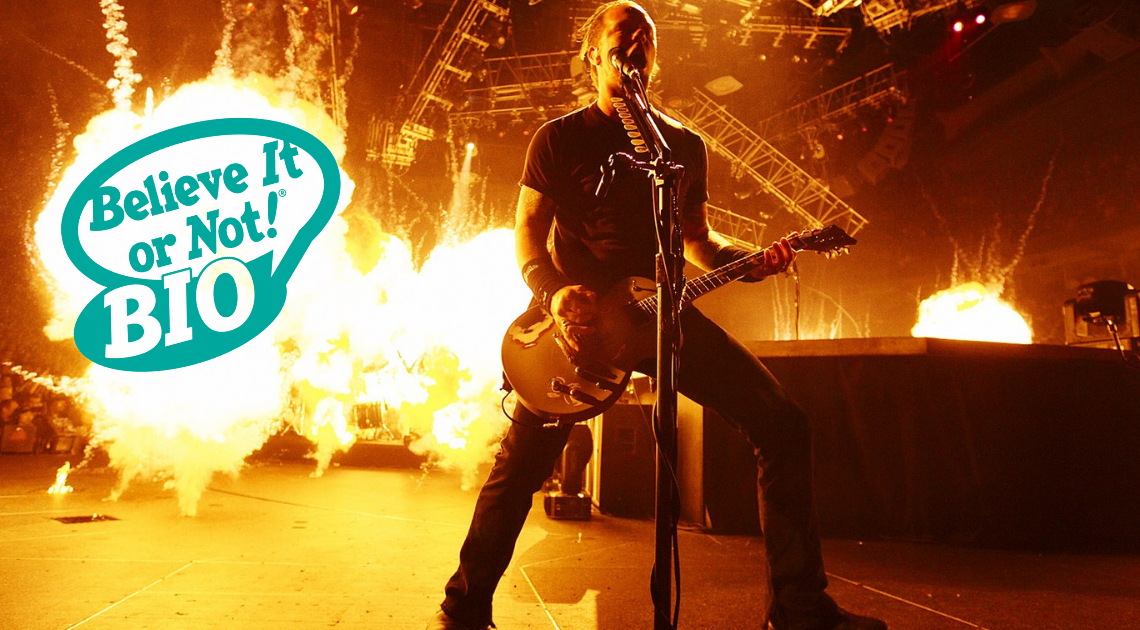 Over the past four decades, Metallica has become synonymous with the metal genre, selling more than 100 million records since their 1981 debut, racking up 18 Grammy nominations with nine wins, and touring the world in record-breaking fashion. Ride the lightning with us as we drop some heavy facts about Metallica’s journey from jam band to the biggest name in metal.

Lars Ulrich Moved From Denmark To California To Play Tennis.

Before becoming one of music’s wealthiest drummers, Lars Ulrich had his sights set on achieving greatness via the family business — professional tennis. Both Ulrich’s father and grandfather were professional tennis players, with the elder Ulrich, Einer, being talented enough to represent Denmark in the Paris Olympic Games in 1924! The duo instilled their passion for the sport into the younger Ulrich, who moved from Denmark to Newport Beach, California, to train professionally in 1980, when he was only 16-years-old.

Upon arriving in California, Ulrich failed to make his school’s team. After that, he turned his attention to music.

First Impressions Were Not Good, And The Band Name Was Misspelled On Their First Album Feature.

In May 1981, Ulrich placed an advertisement in a Los Angeles newspaper called The Recycler, seeking “other metal musicians to jam with Tygers of Pan Tang, Diamond Head, and Iron Maiden.” Guitarist James Hetfield responded to the ad but was unimpressed as Ulrich’s cymbals were cracked and kept falling off his drum kit.

Despite not having a full band to back him up, Ulrich requested a spot on Metal Blade Records’s Metal Massacre compilation album and invited Hetfield to join him on vocals and rhythm guitar. The move changed Hetfield’s tune, and the duo set out to round out their lineup.

Five months after meeting, they had recruited Dave Mustaine, and their first song, “Hit the Lights,” was featured on the compilation under the name Metallica — or “Mettallica” as it was listed on the record sleeve, much to the band’s chagrin.

Did you know that Metal Blade Records listed @Metallica as “Mettallica” on that album? 🤔 pic.twitter.com/JFZkE8hFB6

James Hetfield Has A Guitar Made From An Early Rehearsal Space.

After relocating to the Bay Area, Metallica began practicing at 3132 Carlson Boulevard in El Cerrito, penning both “Ride the Lightning” and “Master of Puppets” in the garage. The location’s sentimental value held strong with the band, with Hetfield even hatching the idea to relocate it years later to be incorporated in their new rehearsal space. Though the owners demolished the garage before his plans could come to life, his friend did manage to keep eight pieces of wood during its demolition. Hetfield recruited guitar guru Ken Lawrence to craft a custom guitar, which Hetfield named Carl, out of the remnants of the musical landmark.

James Hetfield used some of the wood from the garage where “Ride the Lightning” & “Master of Puppets” were written, to build a new guitar! Meet “Carl”:#Metallica pic.twitter.com/winNXS5m0p

Metallica’s “Enter Sandman” Is One of the Most Iconic Walk-up Songs.

From the time he joined the New York Yankees in 1999, baseball fans knew exactly what to expect when famed closer Mariano Rivera, a.k.a. The Sandman stepped out onto the pitch to “put bats to sleep” — Metallica’s “Enter Sandman” blasting through the speakers.

The song about a child’s nightmares and fears became one of baseball’s most famous traditions until Rivera’s retirement September 22, 2013. To show their appreciation, Metallica showed up to play the 1991 hit as his number was retired and even recorded a congratulatory message for Rivera’s induction into the Baseball Hall of Fame in 2019.

Despite being a fan of the men behind the music, Rivera didn’t choose the song for himself — or even necessarily like it, saying, “With all due respect to Metallica, I don’t listen to that kind of music.” The song was a marketing decision suggested by Yankee’s staff member Michael Luzzi, who saw that heavy metal made great walk-up songs based on how the crowd went wild for then-Padres’s pitcher Trevor Hoffman’s use of AC/DC’s “Hells Bells.”

Despite Metallica’s Lawsuit Against Napster, One Member Attended the Co-Founder’s Wedding.

After hearing that their yet-to-be-released single “I Disappear” had been leaked via Napster, Metallica filed a $10 million suit against the peer-to-peer file-sharing platform, explaining in a press release that “it is sickening to know that our art is being traded like a commodity rather than the art that it is. From a business standpoint, this is about piracy — taking something that doesn’t belong to you. And that is morally and legally wrong. The trading of such information – whether it’s music, videos, photos, or whatever — is, in effect, trafficking in stolen goods.”

During this time, bassist Jason Newsted left the band, stating that they were more focused on the Napster lawsuit than making music.

Napster ended up settling the lawsuit in July 2001, at which time Ulrich shared that the band’s “beef hasn’t been with the concept of sharing music,” but rather that they had not been given a choice to participate.

Metallica Has Played a Concert on Every Continent — Including Antarctica!

Metallica has played more than 1,700 live concerts (and counting) throughout their career, including over 50 appearances in their home base of San Francisco.

On December 8, 2013, the band shipped themselves to Antarctica for an hour-long concert dubbed “Freeze ‘Em All,” setting a Guinness World Record for becoming the first band to play on all seven continents — in a single year, at that!

The band performed their greatest hits, including “Enter Sandman,” “For Whom the Bell Tolls,” “Nothing Else Matters,” and “One” for 120 scientists and winners from a Coca-Cola-sponsored fan competition.

Metallica Has Its Own Whiskey Brand, Crafted By Pulsing The Band’s Music Into The Barrel While It Ages.

In 2017, Metallica enlisted master distiller Dave Pickerell (of Maker’s Mark fame) to help them craft a tasty beverage of their very own. Named for one of their songs, BLACKENED American Whiskey is put into black brandy casks for finishing — but not until they’ve been blasted with the brand’s trademarked BLACK NOISE sonic-enhancement process, during which Metallica pulses through the whiskey. Each batch gets a new playlist chosen by the band.

We hope their cover of Thin Lizzy’s cover of “Whiskey in a Jar” was included in that playlist!

After much dispute with their label, Metallica’s first album was renamed from “Metal Up Your A—” to “Kill ‘Em All.” The original artwork featured a hand holding a dagger coming out of a toilet. That didn’t fly with the label either, but it has become a popular band shirt.

Speaking of Toilets… A fully functioning Lars Ulrich–shaped toilet is heading to Ripley’s Believe It or Not! Copenhagen. 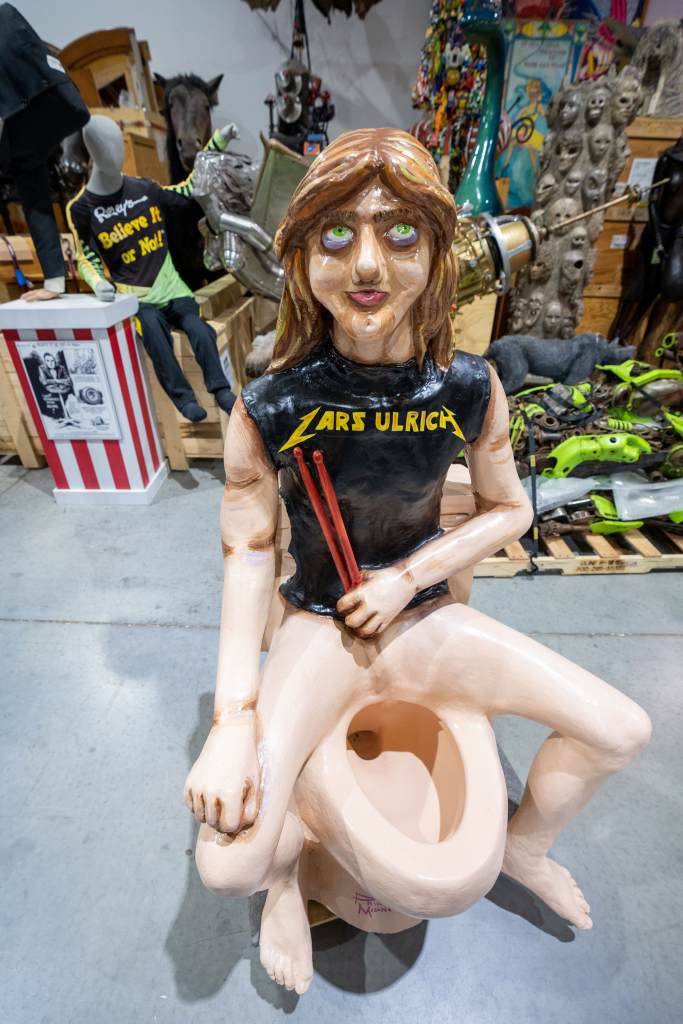 Sculpted Lars Ulrich Toilet created and donated to Ripley’s Believe It or Not! by Prince Midnight

Last year, Florida-based metal musician and quirky craftsman Prince Midnight constructed a fully functioning toilet sculpture in the likeness of ’80s-era Lars Ulrich — and we were lucky enough to get our dirty hands on it!

The sculpture, fashioned using natural clay and resin cast from his own feet and hands, is part of Midnight’s Hellmouth Plumbing Supply, a boutique bathroom venture consisting of toilet seats featuring classic metal album covers. Midnight used photos of Ulrich to inspire the facial mold and finished the whole thing off by running steel rebar from head to bowl with fiberglass batting.

While some may see a toilet shaped after themselves as an insult, Midnight made it very clear that the art piece is in honor of metal royalty, a throne for fans to worship on, if you will.

Midnight, a born metalhead, explained the tribute saying, “I could have painted a picture or made a traditional sculpture, but no one would have even noticed, and really, that’s not the kind of art and performance I do. The first band I ever loved was Metallica, the first record I became obsessed with, the first music I ever dove into, the concert I ever attended.”

If you’re still miffed about the Napster debacle, we’re sorry to say you will not be able to take your business out on the sculpture. Though it was briefly installed — and used — in the restroom of Brass Mug in Tampa, Florida, our Copenhagen museum will be showcasing it in a more, ahem, public forum.

When asked why he’d chosen Ulrich over other band members, Midnight replied Ulrich’s sitting position as the drummer made him the obvious choice for a toilet. “I could have done a urinal with James (Hetfield), but that’s not where the creative spirit was leading me.”

Previous post The Magician Who Allegedly Made Battle Tanks Disappear