Pucker Up Under The Parasitic Mistletoe

You're standing under a dung-twig that supposedly killed a mythological god.

Many of us are familiar with the classic Christmas tradition of kissing underneath the mistletoe. But, before there were awkward encounters beneath the strategically placed branch, this parasitic bunch of green symbolized a bit more than just a peck on the cheek.

Though it is considered a festive plant, mistletoe can actually make you feel everything but holly and jolly. Mistletoe is actually a parasitic organism that steals water and nutrients from its host plant before eventually sucking it dry and killing it. How romantic? If it’s left too long in one location, its seeds will begin to spread leaving it to totally engulf your precious plantlife.

And as if completely botching your botanical garden wasn’t bad enough, mistletoe is also considered an effective poison. If ingested by animals or human beings, it wreaks havoc on the insides. While not known for killing human beings, it can cause drowsiness, blurred vision, vomiting, and even seizures. 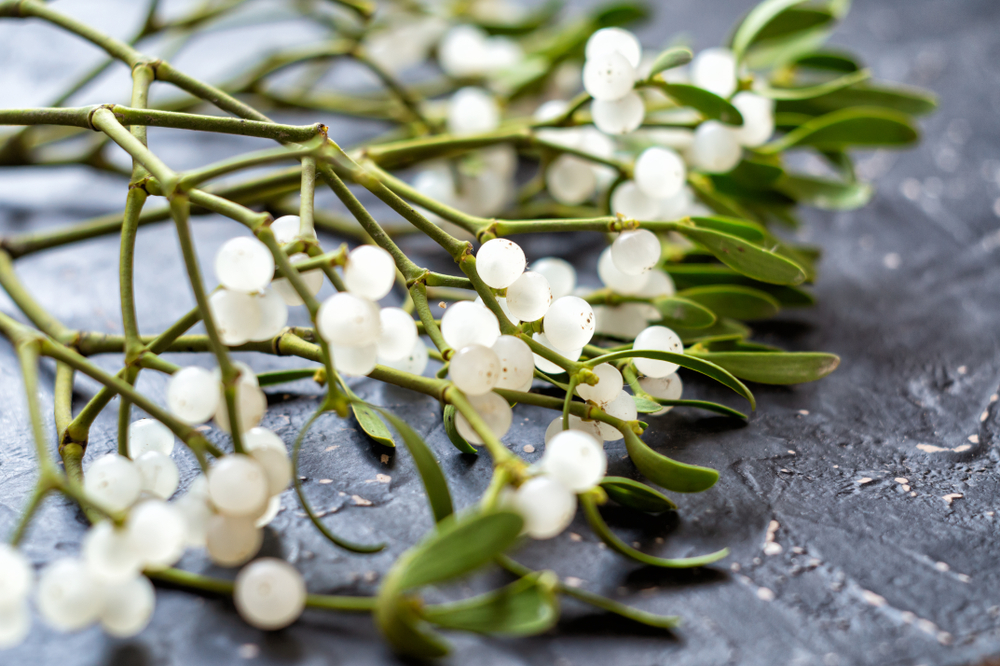 If you were hoping there was a more merry side to mistletoe, you’re in luck. The white-berried plant—yes, mistletoe is white!—most commonly grows in the U.K., continental Europe, and Western Asia. Its twigs and leaves have been used in herbal remedies for over 2,000 years. And as a result of its success, a practitioner of alternative medicine, Rudolf Steiner, and Dr. Ita Wegman began using mistletoe extract to treat cancer! While the effectiveness of this treatment varies, using mistletoe is one of the most widely studied alternative therapies for cancer, according to the National Cancer Institue.

As a result of its worldly roots,—badum, chh!—many cultures have adopted the mistletoe into their mythology, ancient storytelling, and customs.

Many of these traditional stories associated mistletoe with fertility and vivacity. The plant’s romantic facade most likely started with the Celtic Druids of the first century A.D. Because mistletoe blossoms even during the frozen winter, the Druids came to view it as a sacred symbol. And, putting all of the previously mentioned toxic elements aside, the Druids administered it to humans and animals in the hope of restoring fertility.

In the Victorian Era, kissing under the mistletoe wasn’t as playful and innocent as we know it to be today. During this time period, if a girl refused a kiss, she was basically telling the hopeful suitor that she wasn’t ready for marriage. So, for the next year, she was a self-inflicted single lady with no hope of a marriage proposal in sight! Many people would even scoff and stick up their noses at those who refused a kiss, remarking that she would likely die an old maid. 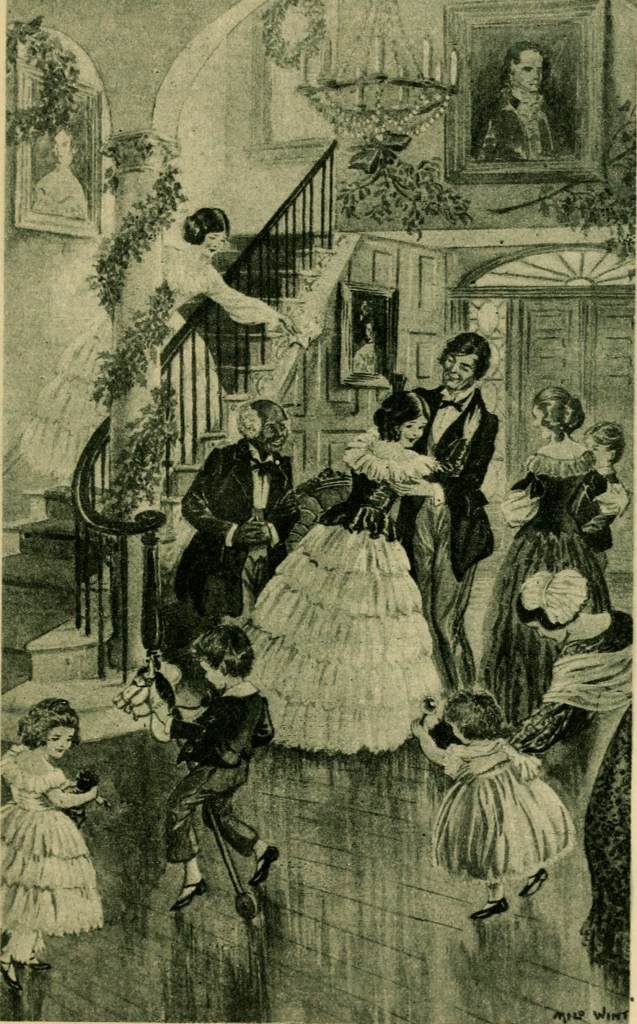 And finally, one of the most famous chapters in the mistletoe book of mythology comes from the Norse story of Baldr. Baldr was the son of Odin and Frigg. Frigg often worried about her son getting in harm’s way. Legend has it, Odin and Frigg made every plant, animal or rock, living in or on the earth promise to leave Baldr alone, making him seemingly impervious to harm.

However, Loki, the god of mischief, found the loophole in this oath by constructing a weapon made of mistletoe—a plant that didn’t actually grow from in the ground. Loki persuaded Baldr’s brother, Hod, to stab his kin with a spear. Hod, who in many stories is blind, thought the attack wouldn’t harm his brother at all, but the spear Loki had given him was mistletoe. Frigg’s shed tears are said to be the pearlescent berries of the mistletoe. 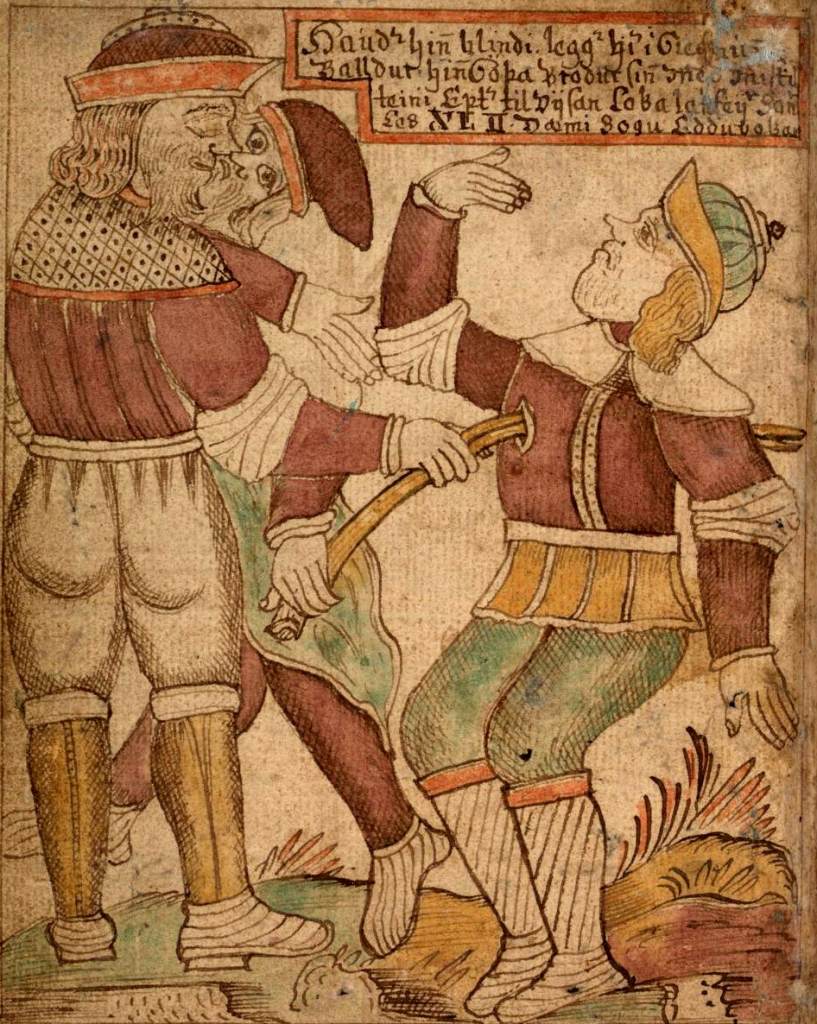 Baldr slain by the mistletoe spear, depicted in an Icelandic Saga

Yes, this is a morbid story. So, why do we associate mistletoe with loving feelings based on this ancient folklore? Amidst the sorrow, Frigg decreed that, rather than punishing mistletoe, it should act as a symbol of peace and friendship evermore.

There seem to be many explanations of the kissing tradition we commonly associate with mistletoe. But, regardless of where its true roots lie, the naming of the plant has always been far less than romantic.

American mistletoe is actually rather accurate in translation. The scientific name is Phoradendron, which means “thief of the tree” in Greek, which makes perfect sense considering its an oxygen-sucking parasite that lives off the living. But, the uncertain etymology of the word is a bit more unsettling. It comes from the Old English word misteltan, with tan meaning “twig.” Because mistletoe can be spread through birds’ feces, it is possible that it derives from the Old High German mistil and, going even further back, the obsolete Germanic noun mix, which translates to “dung”.

In case you missed that little quip: Mistletoe = Misteltan = Dung-Twig

So, next time your crush asks you to step beneath the mistletoe after a few too many eggnogs, or you accidentally end up beneath its “jolly” branches with an unwanted partner, remember that you’re standing under a dung-twig that killed a mythological god and/or once resembled a woman’s inevitable fate of becoming an old maid.

Previous post The Many Miracles of Saint Nicholas: Santa’s Inspiration