Thousands Want To Drink The Mummy Juice From An Ancient Sarcophagus

Adventurous individuals are clamoring to drink contaminated red liquid contained inside an ancient Egyptian sarcophagus with the hopes of gaining mystical powers. The mummy juice petition was posted on change.org by a man named Innes McKendrick from Guildford, Surrey, England.

McKendrick, a video games producer, is imploring the “king of skeletons” in Egypt to allow people to “drink the red liquid from the cursed dark sarcophagus in the form of some sort of carbonated energy drink so we can assume its powers and finally die.”

So far, 34,298 people have signed the petition in hopes of making it happen. And the number keeps growing.

Archaeologists in Alexandria, Egypt, opened the 2,000-year-old unmarked tomb in July 2018. The ancient coffin—made of 30 tons of black granite—is the largest stone sarcophagus ever discovered in the Mediterranean port city. 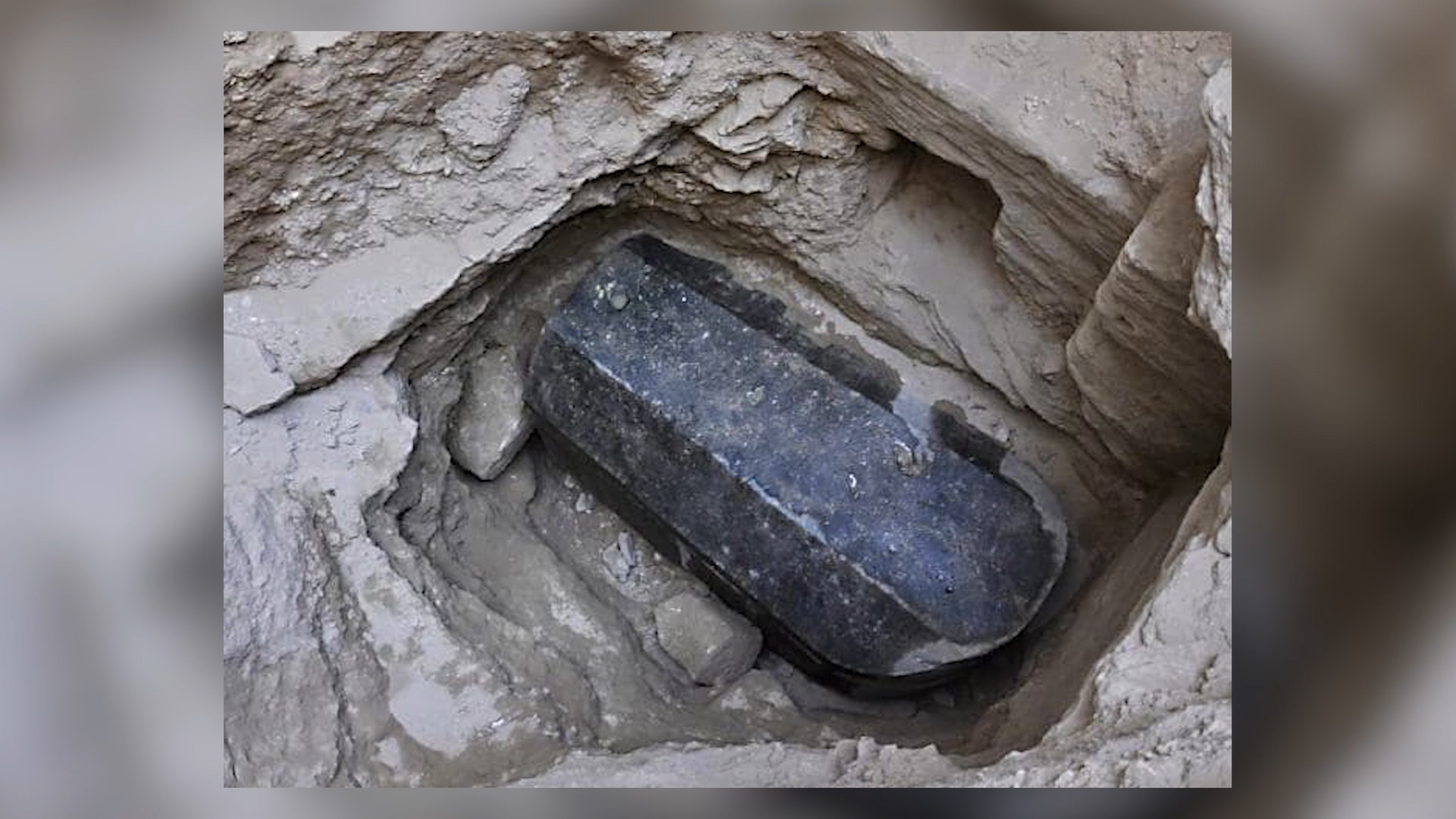 Some believed that the 8.5-by-5-foot tomb was cursed and opening it would mean certain doom. Mostafa Waziri, secretary-general of the Supreme Council of Antiquities, dispelled the rumors.

“Thank God, the world has not fallen into darkness,” Waziri told the media after opening the sarcophagus. “I was the first to put my whole head inside the sarcophagus… and here I stand before you … I am fine.”

Others hoped there would be a giant mummy inside or that it would contain the remains of Alexander the Great. Instead, researchers found three skeletons floating in a crimson sewage-like substance. They soon determined that the bodies were of two men and one woman stacked on top of each other. The skeletons are either from the Ptolemaic (332 to 30 B.C.) or Roman (30 B.C. to 642 A.D.) periods.

One of the skeletons has a 17-cm wide hole in the skull, indicating the person underwent some sort of surgery. Dr. Zeinab Hashish, director of the Department of Skeleton Remains Studies at the Ministry of Antiquities, believes it was trepanation, which involves drilling a burr hole into the cranium.

“This surgery is the oldest surgical intervention ever known since pre-history but was rare in Egypt,” Hashish said in a statement.

Trepanation was performed for religious and medical purposes and to treat ailments such as headaches, hypertension, and swelling of the brain. 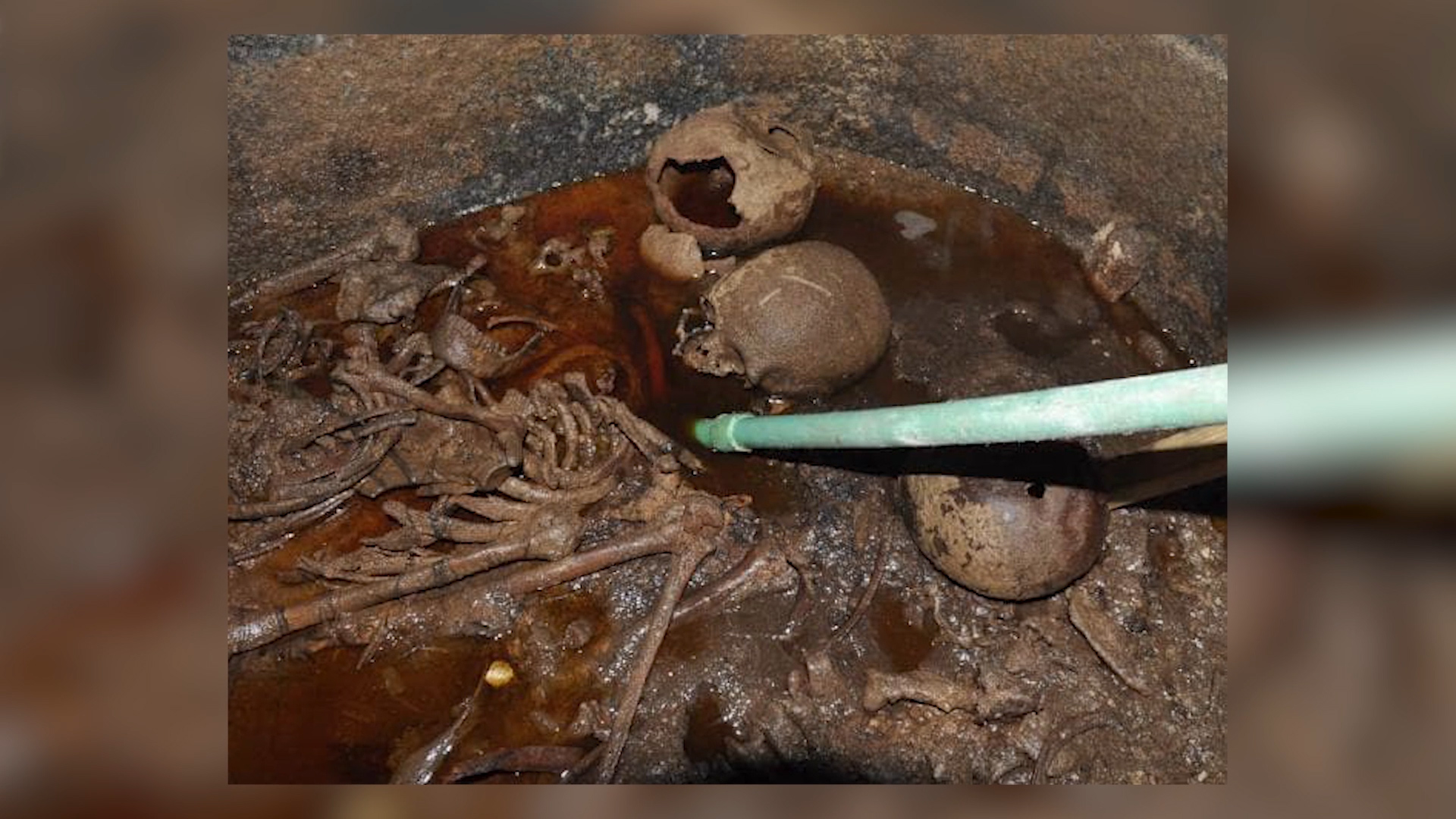 As for the red liquid inside, researchers agree it is contamination from sewage water, which is so potent that it rotted the wrappings encasing the three skeletons.

It’s safe to say that most people avoid coming into contact with—much less drinking—waste water. The people who signed the petition may want to reconsider consuming the red goop. Instead of obtaining powers from the dead, they are more likely to acquire a virus, bacterial infection, or disease from the juice encompassing the decaying bodies.

When asked why he wanted to drink the red mummy juice, McKendrick told Metro: “Many felt let down when the dark and extremely cursed sarcophagus was pried open to reveal only skeletons drenched in raw sewage, which is weird because skeletons are inherently pretty awesome.

“However, I stand true to the hope we were promised, and deeply believe that by consuming the skeleton juice in the form of a carbonated high caffeine energy drink that we can still have the opportunity to enter an era of unending darkness and despair. I’m so glad to see others backing the petition, and sharing in my mission to rapidly bring about the end of all things.”

Meanwhile, the petition continues to gain supporters on a daily basis. It’s unclear whether they want to taste the red mummy juice themselves, hope to witness the petitioner doing so, or think it’s a joke. One user recently quipped: “Yum yum. Mystical mummy powers in my tum tum.”

Other people also believe that consuming certain liquids will make them stronger and more powerful. In 2016, 20-year-old Hungarian boxer Alexander Horvath announced he was drinking snake blood prior to a match with Indian fighter Vijender Singh. Fresh snake blood is used in some areas of the central European country because of its alleged magical powers.

“There is a long and proud tradition of drinking fresh snake blood in my family that goes back many centuries,” Horvath is quoted as saying. “Like my forefathers before me I am a true warrior and will stop at nothing to get my victory. Hungarian soldiers drank snake blood to defeat the Turks all those years ago and now I’m drinking it to beat Singh.”

“The blood of these sacred animals makes me powerful beyond words. With snake blood coursing through my veins there in no way that Singh will defeat me. Since I’ve added snake blood to my diet I have been able to train harder than ever before without tiring and I’m punching harder than ever,” he continued.

Then there’s a Cuban cocktail known as canchánchara, which supposedly has healing elements. It’s unclear whether Cuban guerillas or African slaves developed the drink, which supposedly wards off diseases such as the flu.