Octopus Wrestling Was A Real Sport

A crotch grab doesn’t work on a creature with eight crotches.

From 1949 to the mid-1960s, the unconventional sport of octopus wrestling ran rampant across the United States. Thousands of people would turn out to the seaside to wait with bated breath as a diver trudged into the ocean to fight dangerous cephalopods.

The earliest recorded referring to fighting an octopus as a wrestling sport is in a 1949 issue of Mechanix Illustrated magazine. Wilmon Menard, a traveler in Tahiti, boasted that his favorite hobby was octopus wrestling. He regaled readers with a tale of him assisting a local hunter in a clash with a giant octopus in the clear depths of the surrounding sea.

Menard called the octopus the “cunning, eight-armed king of the ocean,” even claiming that local guides had told him the small island he was staying on was the spot of creation for octopi. He claims to have occupied a beach called Rimaroa—a place hidden from a rudimentary internet search—leaving the authenticity of the lore and customs in his account open to question. Nevertheless, alongside a full-page illustration of him fighting an absurdly enormous octopus, he recounts their ferocity. 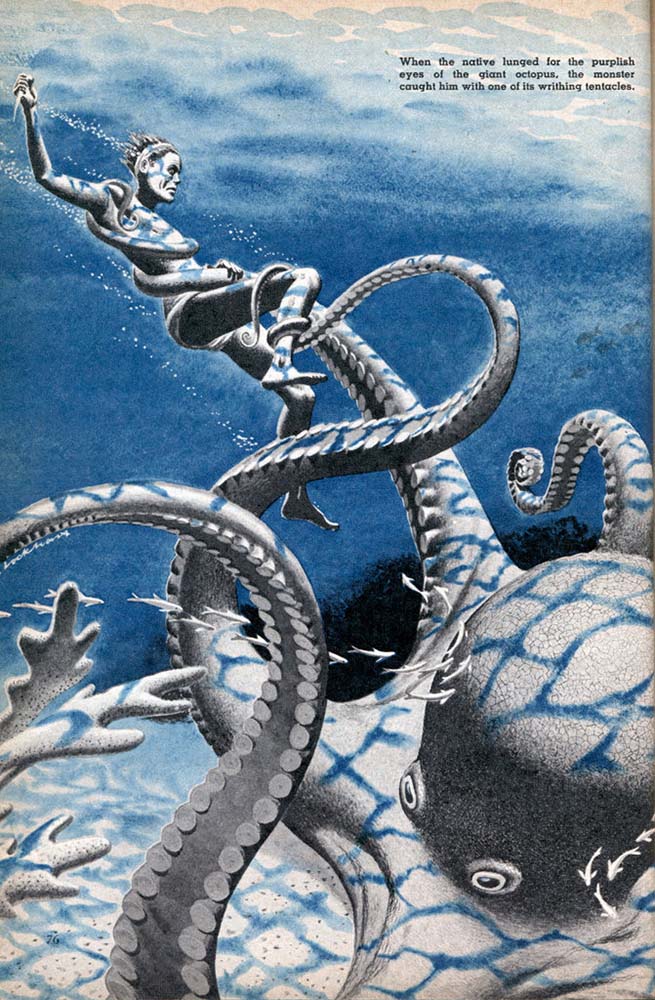 A tribal leader in his story claims that octopi are the prowling ghosts of a wicked sea god called Tumu Ra’i Fenua. This terror of the seas is rumored to hold the sky down with massive tentacles and send legions of his minions to ravage villages from time to time. These legends cultured a vital octopus hunting culture in the tribe, which was merely a joyous pastime for Menard.

Menard’s native companion was the 18-year-old Roo: “handsome and garbed in a scarlet loincloth.” Regarded as cowards in the open, the octopus was known to become quite vicious when cornered. At a distinct advantage with the animal’s ability to breathe underwater and to slink into the crevasses of the island’s surrounding coral reef, the hunters took every advantage they could get.

Armed with 12-foot-long barbed spears, Roo and Menard slipped into the coral cavern. Wary of these interlopers, the octopus retreated, but the local Roo was accustomed to this behavior. He was patient and would play a flute a distance away. Menard described the process as if it were the work of a snake charmer: the octopus was slowly drawn out of hiding by the music.

Their spears struck immediately. The tentacles lashed out, and ink filled the water—but to no avail; the octopus was dead. They returned to the village with their kill. Menard refused to eat the beast at first but was eventually convinced. As soon as the first bite cleared his mouth, he proclaimed it a marine delicacy. Menard continued to hunt octopi with Roo this way for a time. As they systematically searched nearby lagoons, they eventually came upon a “huge monster with 25-foot tentacles.”

The pair deemed this octopus too dangerous for them alone and enlisted the help of almost the entire village to bring it down. In the struggle, the creature caught Menard by the leg. Fearing the creature’s grasp, he hacked at with his knife but was only freed when the octopus’s sucker tore the skin from his body.

“I realize it all sounds like a loathsome sport but it’s really more fun than hunting some poor harmless creature. When you wrestle and kill an octopus, you’re ridding the marine world of a treacherous enemy.”

Menard told a good story, but his timing was impeccable—it truly caught the hearts and minds of divers across the world. With the end of World War II and the progression of recovery, man’s sense of adventure and thirst for danger was growing. Science fiction and monster movies dominated the media in the coming decade, and the sea once again became a place for discovery and entertainment.

Technical innovations likewise made the sport more accessible to recreationists. Many of the men who returned home had received the only available dive training in the country during the war. In 1952, the wetsuit was invented, and along with it came the first ever civilian diving course.

Though diving was popular, equipment remained rare and expensive. It’s no surprise that the wealthy Puget Sound became the heart of octopus wrestling in America. 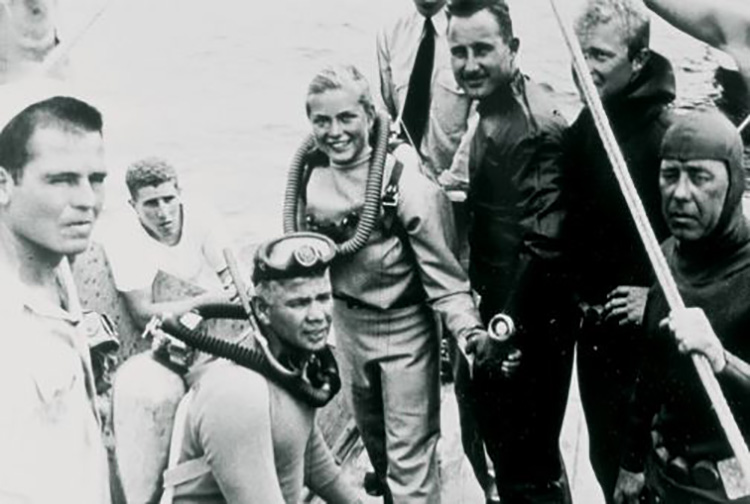 Techniques took a while to develop, and according to writer H. Allen Smith, wrestling may have been an exaggeration. Full nelsons and crotch holds were useless on a creature with eight arms. The wrestling mostly occurred when trying to get the octopus out of its cave. Once out, it was fairly common for the octopus to stick to the diver as he or she was either reeled back out of the water or made a slow swim for the shoreline. Once ashore, round two began, as the powerful suckers had to be peeled away. Participants competed for weight, with the heaviest cephalopod earning their captor glory.

Though many divers used Aqua-Lungs for safety, divers who went with a simple snorkel could earn extra points. Despite the sport’s advertised danger, no record of any deaths during one of these outings is readily available. “They don’t have a lot of holding strength,” said veteran octopus wrestler Gary Keffler. 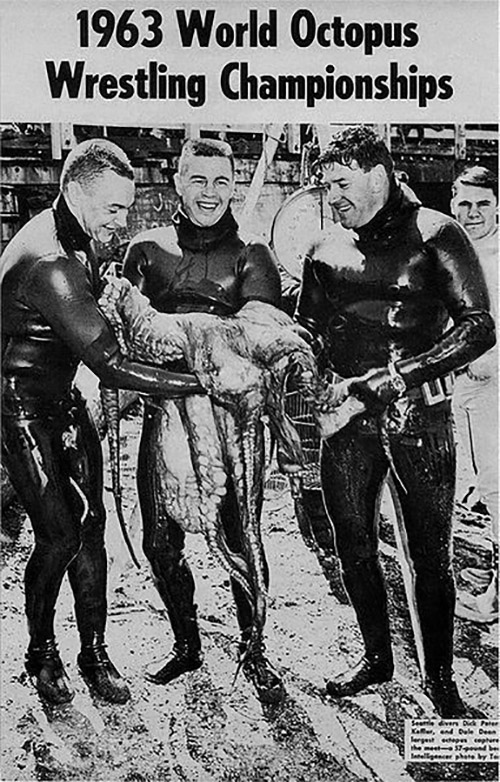 The sport came to a head in 1963, when an octopus wrestling tournament drew thousands to the beaches and even gained TV coverage. While many were impressed with the idea of the spectacle, the broadcast highlighted one of the main weaknesses of octopus wrestling as entertainment: all the action happened underwater. People cheered as the first diver waded into the sea, but after hours of waiting, the enthusiasm dried out as he returned with the captured octopus. A total of 11 divers competed, catching 20 octopi. The winning octopus weighed a hefty 57 pounds.

After the competition, the prize octopi were eaten, released, or sent to the Seattle Aquarium. The tournament continued at Puget Sound for a few more years but was eventually abandoned. Octopus wrestling has yet to see a Renaissance, and sport wrestling the animal has been outlawed across much of the country.

Though it’s no longer an acceptable sport, divers still wrestle octopi from time to time. Dylan Mayer, a diver from Puget Sound, prepared for months to capture an octopus and drag it to shore. He did so successfully in 2012 but landed in hot water once the public found out. Though wrestling for sport had been banned in 2010, divers were still allowed to harvest one octopus per day for food. Mayer ate his, but the issue rekindled debate in Washington about the sport’s ethics and animal rights.

Next post Nowhere Is Safe, Lightning Can Absolutely Strike The Same Place Twice