Could The “Missing Link” Be Oliver, An Alleged Human-Chimp Hybrid?

Humans share 99 per cent of the same DNA with chimpanzees.

The 1970s sideshow circuit gave audiences the chance to meet Oliver—a chimpanzee like no other. In fact, Oliver was so different from other chimpanzees that he was thought to be partially human.

Brought to the US from Africa, Oliver was presented as the “missing link” between the two species. The bold claim was made that he possessed 47 chromosomes, one more than man and one less than a typical chimpanzee. Regardless of this ploy to sell tickets, Oliver was indeed different.

The suspected human-chimp-hybrid appeared to look human and was even adorned with a pattern of baldness. He had a soft voice and his demeanor was quite charming with the ladies. From living with his trainers, he quickly learned how to use tools, do chores, and picked up on human habits like drinking coffee. Oliver even walked upright. 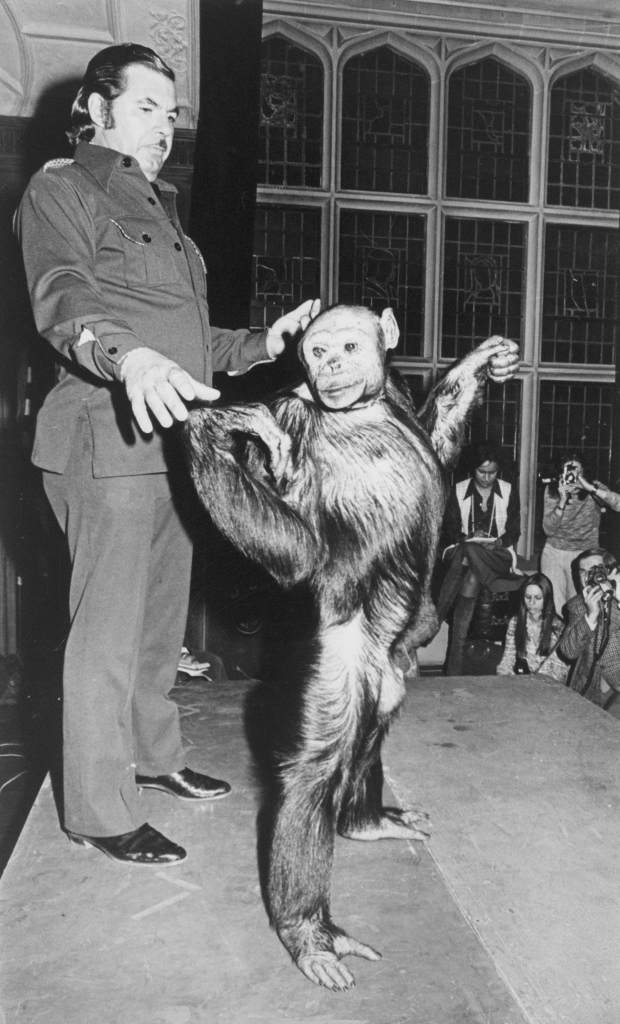 Oliver the Chimpanzee and South African animal handler Frank Burger before the press on March 14, 1976 in New York City. The chimpanzee was four and a half feet tall and 125 pounds, and was said to have had 47 chromosomes, one less than apes and one more than humans.

Although uncharacteristic of his species, genetic claims were debunked in 1996, when the University of Chicago revealed that Oliver had the same number of chromosomes as all other chimpanzees.

The rumors of a successful hybrid persist.

Most recently, evolutionary psychologist Gordon Gallup recalled such an experiment to The Sun. According to the story, scientists became concerned with the ethical dilemmas the offspring would bring up, so they allegedly killed it in a panic. Gallup doesn’t claim to have witnessed the experiment, but insists that another trusted colleague told him it was true.

Regardless of if you believe Gallup’s story or not, we do share 99 per cent of the same DNA with chimpanzees and hybrids are pretty common in the animal kingdom. Humanzees would have much greater social implications than a liger or labradoodle, but who’s to say it’s not possible…

Next post Got Milk? Dressing In Dairy Does The Body Good!