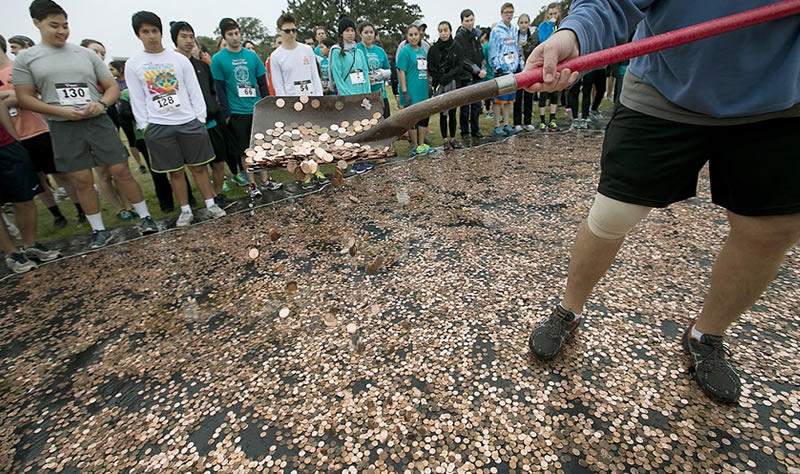 A team of students at the University of Texas at Austin sat down in mid-December and decided they were going to host a world record-breaking 5k for an excellent cause. Two months and FIVE HUNDRED THOUSAND PENNIES later, they did just that.

The students had already founded a non-profit organization known as Raise 4 a Cause and hosted several fundraising events, but they wanted to make this one stand out.

The task of event promotion and creating a unique theme for the 5k fell to Cambria Sawyer, a fellow UT freshman and friend of Raise 4 a Cause, who suggested that they break the world record for the title “pennies collected for charity” and that they continue to break a new world record each year the 5k was hosted. The 5k was officially named the Record Run, and as registrations came in, so did hundreds of thousands of pennies.

Students at the University jumped on the opportunity to be official world record-breakers. Many organizations held contests- with exceptional recognition going to Texas Theta Chi and Phi Kappa Psi- to help bring awareness to such a strange, but intriguing event.

The event, the proceeds of which were raised entirely for the Livestrong Foundation, took place at Camp Mabry on February 22. Registration fees for the run were exchanged at Wells Fargo in the days leading up to the run, and volunteers arrived at 4:30am sharp -despite the chilly rain- to begin unwrapping the 500,000 pennies and display them in the shape of Texas at the center of the race track.

Half of a million pennies were delivered on-site in a flatbed trailer weighing in at over 2,755 pounds- just shy of the two-ton mark. The Texas, which had been measured and outlined the day before with 9 rolls of painters tape on 3,000 square feet of tarp, was slowly filled corner to corner for five hours before the race began.

As the 350 participants arrived and signed in, they headed over to the Penny Texas to help unwrap the 10,000 rolls of pennies and became official contributors to the world record.

Just before the race began, the last penny was placed on the display and participants waved to the photographer lifted high up in the bucket of a fire truck.

Of course, all of those pennies had to go somewhere. After the last record-breaker crossed the finish line, the pennies were shoveled back into the trailer and sent off to the bank for one final count which totaled in at over $5,000.

Missed this year’s Record Run? No worries! The record to beat for next year’s event is soon to be announced, see you there!

Previous post Frozen Bodies Waiting to be Revived in the Future