A school in Canada claimed they had put 40 people in a phone booth.

The Internet may enable and perpetuate any number of ridiculous challenges, but the art of doing stupid or reckless stuff just for the hell of it has been around forever. Much like the goldfish-swallowing craze that swept through colleges in the 1930s, phone booth stuffing became the fad of the hour in the 1950s.

Legend has it that phone booth stuffing was popularized by a group of 25 South African students who managed to cram themselves into a single booth in 1959. As word of their exploit spread, other colleges couldn’t help challenging it.

Rules for the challenge varied from college to college. Some required everyone be totally inside the booth, some allowed legs and arms to stick out, while others just required more than half a person’s body be in to count. In England, where the practice was called “telephone booth squash,” they required someone be able to make a successful phone call once the booth was fully occupied. 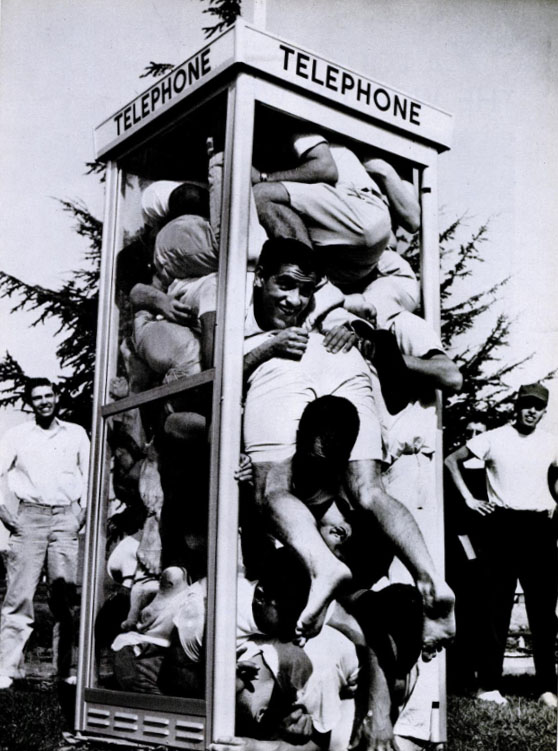 22 students stuffed into a booth at St. Mary’s College.

Incorporating the feat into their academics, many students tried to devise ways of fitting in more people through the application of geometry and calculus. Students fasted to fit in and even recruited as many small-bodied freshmen as they could find for the cause.

As the stakes rose, they began cutting class. Groups claiming to break the record even upended a phone booth, knocked it on its side, and piled in like it was a canoe. Rumors of a school in Canada claimed that they had managed to cram 40 people into a phone booth, but an investigation found they had used a fraternity phone room and were disqualified in most people’s eyes.

Despite receiving press from news outlets all over the country and being featured in TIME magazine, the fad lost momentum by the end of 1959—the same year it started. A new challenge of stuffing kids in Volkswagen Beetles would emerge years later, but phone booth stuffing would only rear its head during reunions and class anniversaries in the coming half-century.