The Royally Fascinating Life Of Diana, Princess Of Wales

From her ballerina dreams to the pranks she played on her neighbor, let's waltz our way into some unusual facts about the "People's Princess," Diana of Wales! 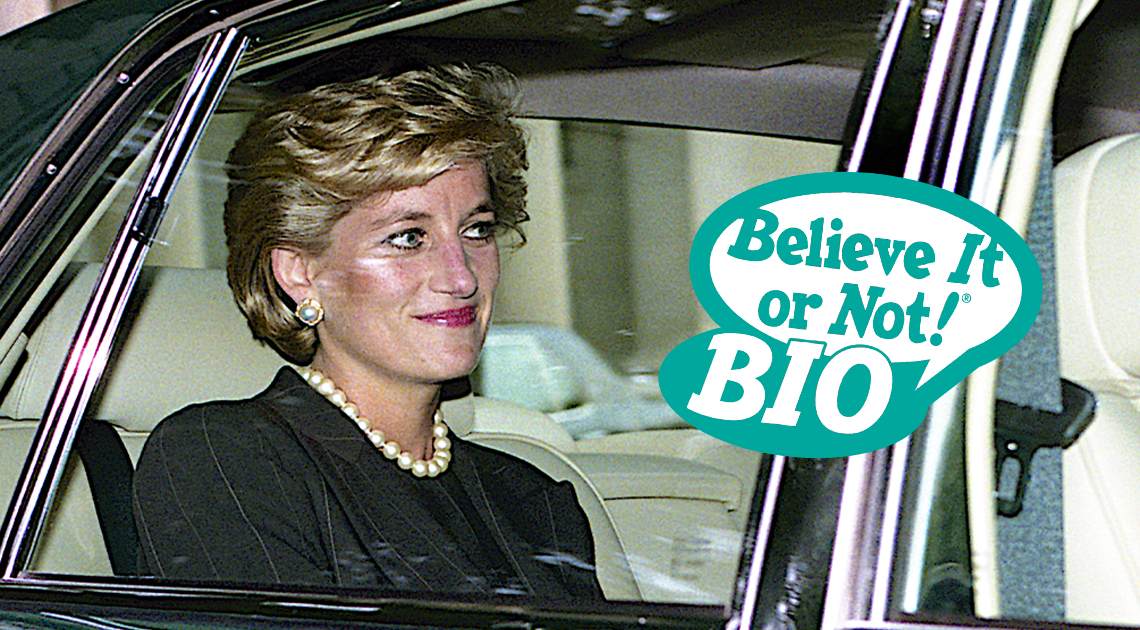 Princess Diana was just 36 years old when she died in a tragic car crash in 1997, but in this short lifetime, it’s safe to say she did a whole lot of living. While most people know the basics about the royal, there are many things one may be surprised to learn. From her part-time job earning money as a teenager to her passions, dreams, and aspirations before marrying Charles, let’s waltz our way into some unusual facts about the “People’s Princess,” Diana.

As the daughter of an earl, becoming a dancer wasn’t exactly a practical profession for the aristocratic Diana. However, that didn’t stop her dreams of becoming a professional ballerina. What did set her back were her long legs and five-foot-ten stature—the future princess simply wasn’t the proper height. Her ballet teacher, Anne Allan, once said of her student, “She had dance in her soul. I realized the pure enjoyment that it gave her. She loved the freeness of being able to move and dance. She loved it.”

Instead of dancing for a living, Diana supported the English National Ballet and infamously danced with actor, John Travolta, during a party at the White House in 1985. She also became friends with the dancer, Wayne Sleep, and even asked him for a few lessons. They danced together at the Royal Opera House in the ’80s. 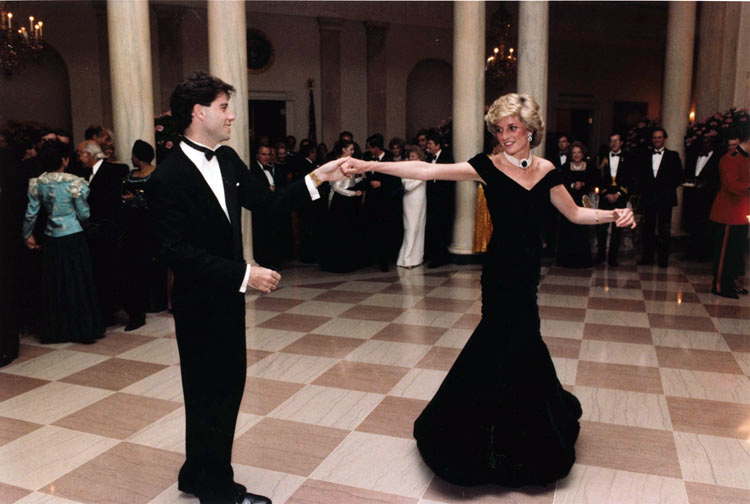 He later said of their performance, “The audience gasped when Diana appeared, as if they’d all taken one huge breath. The routine had a bit of everything: jazz, ballet, even a kick line. At one point, I pirouetted and she pushed me down; then I carried her across the stage. I remember thinking, ‘Don’t drop the future Queen of England.’”

Her love for dance has apparently rubbed off on her grandson, Prince George, who started taking ballet classes at the age of five.

Princess Diana’s wedding dress was the longest in royal history, and a piece of her wedding cake sold for a mighty sum.

Diana’s wedding dress was designed by husband-and-wife duo, David and Elizabeth Emanuel. It was a beautiful silk-taffeta creation that strongly reflected the eighties aesthetic. With puffy sleeves, 10,000 mother-of-pearl beads, thousands of sequins, and antique lace once that was once owned by Queen Mary, the gown cost a reported $115,000 to create. The gown also had a 25-foot train and was longer than any other royal wedding dress in history. 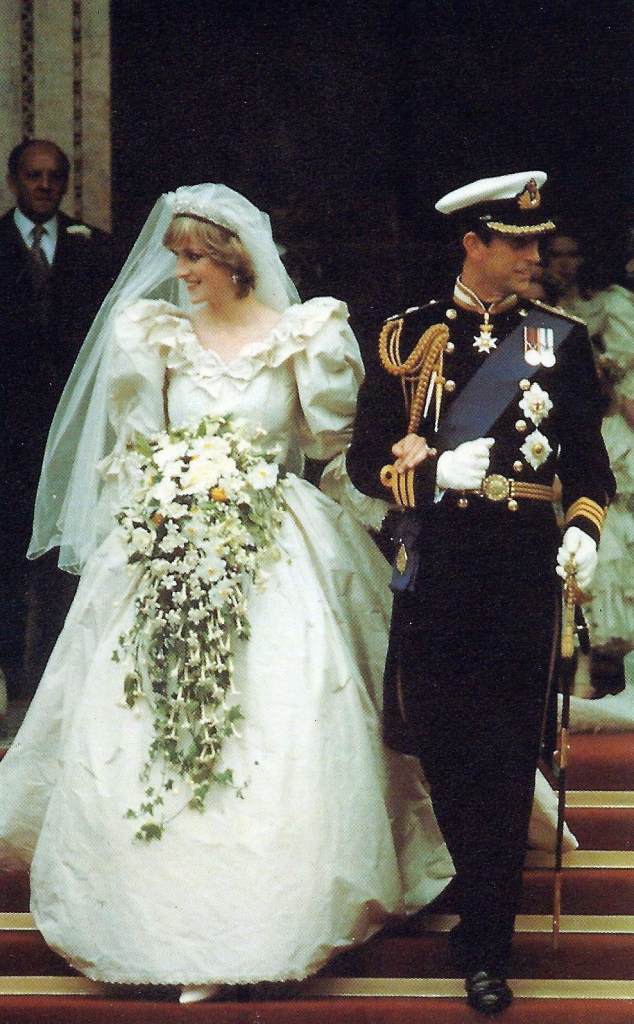 Around 75 million people watched the ceremony at St. Paul’s Cathedral on the BBC on July 29, 1981. The design of the dress was kept undercover until the day of the wedding, which was declared a national holiday in England.

The couple had 27 cakes at their wedding, and they were made by Royal Navy cooking school head baker, David Avery. A single slice of one of the cakes sold at auction in 2014 for $1,375, and it was stored in the original white and silver box. And of course, the Ripley’s exhibit collection wouldn’t be complete without a slice of our own. A fruitcake soaked in brandy, the 37-year-old cake is still exquisitely preserved thanks to its high alcohol content.

Before he got engaged to Diana, Charles had a close friendship with her sister, Sarah. Originally, Sarah had been seen as a match for Charles. But during a ski-trip in February 1978, Sarah shut down any rumors of the two as an item, and dashing any future chance she may have had with Charles, when she told journalist, James Whitaker, that she wouldn’t marry Charles “if he were the dustman or the King of England.”

While many sources have claimed that Charles and Sarah had a few sparks of their own, she went on to marry Neil Edmund McCorquodale in 1980. Diana recalls her sister’s mishandling of the press being her downfall—and likely the reason her sister’s status as the number one choice for Charles had fallen. “My sister spoke to the press,” Diana said. “Frankly, that was the end of her.”

Four years after they met, Charles and Diana wed. Sarah remained one of Diana’s closest friends and confidants throughout her lifetime. While the Princess didn’t trust many, she relied on her older sister in times of need. Both Sarah and her other sister, Lady Jane Fellowes, went with Charles to collect Diana’s body from Paris following her death.

Diana’s formal education ended at the age of 16.

Until around the age of nine, Diana was taught by a governess at her home named Gertrude Allen. She then attended a boarding school called Riddlesworth Hall in Norfolk until she was 12. Next, Diana went to West Health Girls’ School in Kent, following the footsteps of both of her sisters. Diana stayed at West Health, which is somewhat equivalent to an American high school, until the age of 16.

And though she attended many different schools, Diana did not exactly perform academically at any of them. She wasn’t the best student—in fact, she failed her O-levels twice. (O-levels are standardized tests in Britain that all teenagers must take.) She opted to discontinue her formal education after attending West Health.

In place of a college education, Diana decided to attend a finishing school in Switzerland. She stayed until spring 1978 and then went back to London at the age of 17. Diana attended the Institut Alpin Videmanette, largely as a formality—it didn’t include any academic classes. Instead, the finishing school offered classes on subjects such as sewing and French.

Though it’s worth noting, at the time, it wasn’t uncommon for women in aristocratic circles to focus on etiquette classes instead of academic subjects.

Diana made her money as a housekeeper.

Perhaps the reason why Diana identified so well with people from all social strata was because she could relate to those in the working class. When she left finishing school, she lived with her sister, Sarah, and friend, Lucinda Craig, in London. She supported herself by taking some low-paying gigs. Most people know she worked at a preschool, but she also made money babysitting and housekeeping.

Housekeeping was a skill that carried over into her royal life. Diana commonly cleaned up after attending lunch and dinner parties with her friends. One palace insider commented, “She’d wind up in the kitchen with her hands in the sink and wouldn’t stop until everything had been put away.”

According to the royal biographer, Andrew Morton, Diana felt a “quiet satisfaction” when she cleaned the house or helped friends take care of the dishes. Plus, it was a way to connect her to a “normal” life.

Princess Diana is buried on an island.

Millions of people watched Diana’s public funeral in 1997. Her coffin journeyed from Kensington Palace along Hyde Park to St. James’s Palace and Westminster Abbey in London. What the public didn’t see was her final resting place at her childhood home. Only her sons, William and Harry, Prince Charles, her mother, her siblings, a close friend, and a clergyman were present. 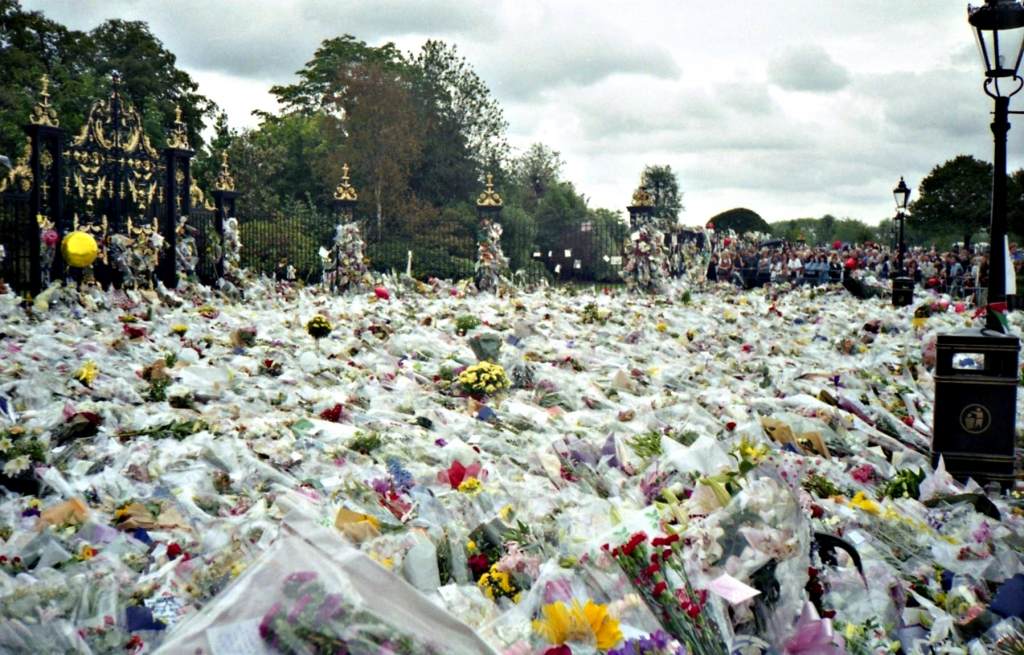 Diana was buried in the Spencer estate in Althorp. Specifically, she was laid to rest on a small island in the middle of a lake at the estate. It’s located about 70 miles from London in Northampton and was built in 1508. Diana’s brother Charles took over the estate when their father died in 1992.

Diana’s gravesite is surrounded by a path of 36 trees, which represent the 36 years of her life. A monument was built in tribute to Diana, and there’s a temple for visitors. There are also tablets on either side of the monument documenting Prince Charles’ tribute from her funeral and quotes from Diana that related to her charity work.

Diana picked out her engagement ring from a catalog.

In 1981, Charles gave Diana a catalog featuring items from the crown jeweler, Garrard. She chose a Ceylon sapphire stone with diamonds set in white gold. Interestingly, this ring was a stock item—not rare or one-of-a-kind in any sense. Not everyone was happy with her decision, including some members of the royal family who thought her choice was uninspired. In fact, the ring was available to anyone who had $60,000 to spend.

Rumors surrounding her ring choice vary—she chose that particular ring because it was the largest in the catalog, while others say it resembled her mother’s engagement ring. Either way, Diana liked it so much she even wore it from time to time after divorcing Charles.

Prince William later gifted the ring to his fiancée Kate Middleton. William said it was one way for him to involve his mother in his wedding day. The ring was the world’s most sought-after engagement ring style for over a decade following Diana’s wedding and became popular again after Kate received it from William.

Princess Diana butt heads quite often with her neighbor, Princess Michael of Kent, resulting in quite a few jokes and pranks. Royal sources in the documentary Princess Diana – The Woman Inside revealed that Diana once received a thong as a gift. At the time they were a popular piece of fitness attire, and Diana came up with a plan to embarrass Princess Michael using the undergarment.

Daily Mail royal correspondent Richard Kay recalled, “Diana rushed out in a very revealing gym kit and surprised Princess Michael as she and a whole bunch of rather stuffy friends were going off to the races.”

Diana and Michael shared quite a contentious relationship. It’s no wonder that Diana liked to retaliate with a prank now and again.

Princess Diana broke the royal “obey” vow to her husband.

Until 1981, all royal wives pledged to obey their husbands amidst their wedding vows. However, this statement was noticeably absent from Charles and Diana’s nuptials. Instead, Diana, who was 20 at the time, controversially opted to omit the phrase when she tied the knot.

Both Queen Elizabeth II and Princess Anne referenced the 1662 Book of Common Prayer, which requires women to promise to “love, cherish and obey” when they get married. In 1986, Sarah Ferguson promised to obey her husband Prince Andrew, and Sophie Rhys-Jones did the same in 1999 when she married Prince Edward.

However, Kate Middleton decided to follow in Diana’s footsteps when she and Prince William walked down the aisle in 2011. She promised to “love, comfort, honor and keep” her husband, omitting the obey phrasing form her vows as well. Perhaps she took a page from Diana’s book in tribute to her husband’s mother.

A true vision of grace and poise, the People’s Princess has left a legacy for all and many lessons in kindness, empathy, and compassion.

Next post Patience Worth, The Ghostly Author, And Her Medium