Is Quicksand Actually Strong Enough to Swallow You Whole?

Keep calm and wiggle on.

Despite the popular cinematic depiction of quicksand, research shows that these sinking holes may not be as encapsulating as we believe. From Indiana Jones to Jumanji, we’ve witnessed our favorite characters slowly slip into panic and spring to heroic acts to save themselves from quicksand traps. But how truly difficult is this scene to escape?

The fact is, if you get stuck in a bed quicksand, there are ways to escape its evil clutches. In fact, due to the composition of the human body, you’ll never actually be fully immersed and swallowed by quicksand. Made mostly of water, human bodies actually float and don’t entirely sink in the loose, wet sand. And, while getting out can be difficult, it’s not impossible.

The Recipe for Disaster

According to Dutch and French research, quicksand is made of fine sand, clay, and saltwater. Over time, the sand continues to thicken. However, it responds to tiny deviations in force, and it can liquefy quickly under high stress. If a human is trapped in its clutches and begins to flail around, he or she will start to sink deeper. However, regardless of movement or squirming, people aren’t dense enough to dip all the way under. 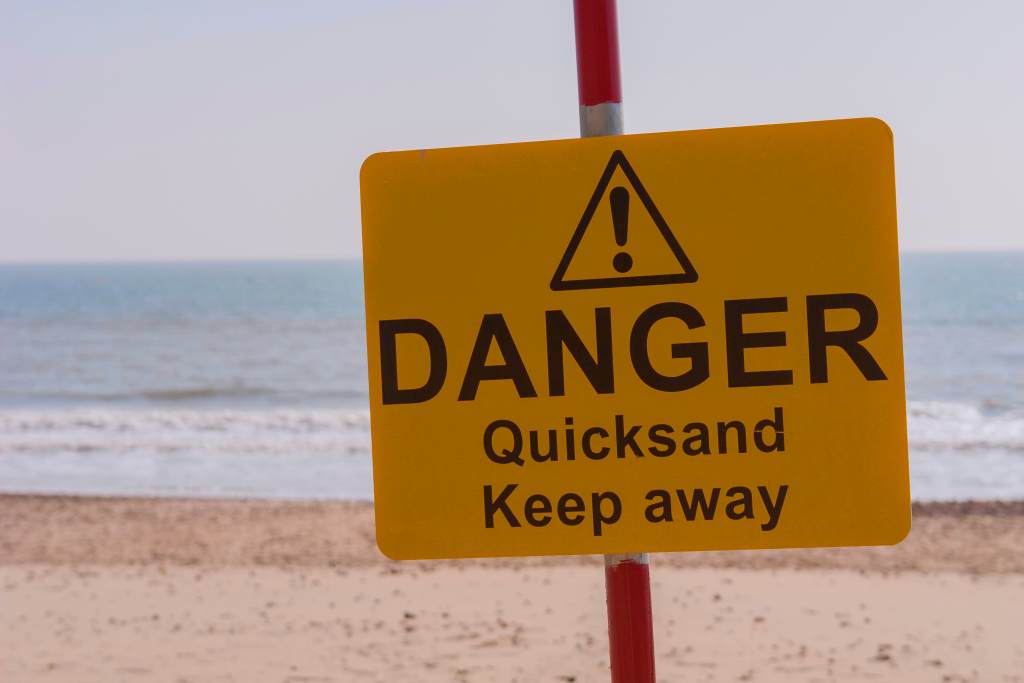 Under high stress, quicksand liquefies. However, its viscosity increases due to the production of sand sediment. People struggle to escape because the dense sand makes it challenging to move. Water helps loosen the sand sediment and an incredible amount of force is necessary to break through it. To pull a person’s foot out of quicksand, at a rate of one centimeter per second, requires the same amount of force needed to lift a medium-sized car.

Get Me Outta Here!

While the quicksand itself won’t kill you, other factors can. If stuck near the ocean, where quicksand is typically located, the tide can roll in with potential drowning danger for any creature stuck inside. Other dangers may arise within the longevity of time trapped in the sand—starvation, exposure, or lack of resources.

So what should you do if you happen to fall in quicksand? Experts recommend wiggling your legs to create space between your appendages and the sand. This will allow water to dilute the sand, leaving you the ability to slowly crawl out of its clutches. It may be a slow process, but it’s effective.

While stumbling upon, or into, quicksand is a possibility, the notion that the sand will swallow you whole is most definitely a common misunderstanding, thanks to our friend Indiana Jones. Keep calm and wiggle on (out)!