The Last Pit Stop On The Way To Area 51

The one shining beacon—or is it a mirage?—in Rachel, Nevada.

EDITORS NOTE: This article serves as a recommendation from Ripley’s contributor and Believe It or Notcast host, Ryan Clark. From vampires in New Orleans to Skunk Apes in South Florida, Ryan has seen it all on his many Notcast adventures.

RACHEL, Nevada — I guess I wanted to go out there because of the so-called “Storming” of Area 51.

No, I didn’t want to storm Area 51 myself. But, I was fascinated by those who did, and I followed from afar.

Back story: In September 2019, more than a million people on Facebook planned to “storm” Area 51 to attempt to find out what’s going on at the secret government facility. It didn’t really happen. People showed up. Two were arrested. No one stormed anything.

Of course, I knew no one could really storm the area—they’d get mowed down by men in black. But the desert, and everything around the Extraterrestrial Highway—Nevada Route 375, which was given the out-of-this-world-name by characters in Independence Day—really made me want to visit. Luckily, a trip to a marketing conference for my day job provided the opportunity. I got to Las Vegas and hopped in a rental car around 8 a.m. With an entire day to explore, off I went. 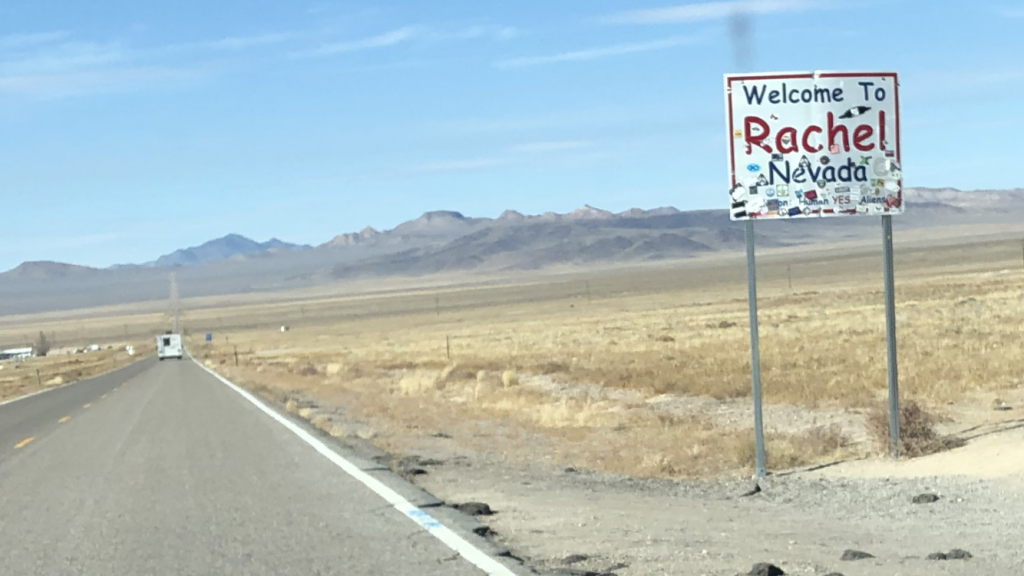 Here’s the deal: There really isn’t a lot out there in the desert.

Like, there’s nothing. Well, aside from the one lonely landmark. The one shining beacon—or is it a mirage?— sitting and waiting for every UFO and alien buff to drive in from the West Coast or the Four Corners.

Welcome to The Little A’Le’Inn, a hybrid motel-bar-diner located 45 miles from Area 51 in little Rachel, Nevada. Open since 1988, the oasis has been slinging beers and burgers—and providing beds and an RV parking lot—for travelers interested in investigating the paranormal of the Nevada desert.

I read on the internet that someone said it takes two hours to drive to Rachel from Las Vegas. Think again, internet! It’s a solid three-hour trip; so turn on the podcasts and settle in. The sights on the way are also pretty few and far between. Make sure you’ve got a full tank of gas and a car that won’t break down. And also: Watch out for the cattle, which frequently cross the road at any time of day.

As you get closer to Rachel and the diner, you’re also probably going to lose cell reception, so you may want to have a map with you.

I got there around lunchtime. And let me tell you, once you arrive, you’re beyond glad to see another human being—and to use the bathroom (which are clean)—that you don’t care how long it took you to get there. As a memento of your long and lonely journey, snag a picture of the wrecker outside holding up a little UFO next to the sign, after which you’ll probably want to go inside, say hello, and grab something to eat. If you haven’t picked up on it by now, the journey is a long, lonely, and hungry one. 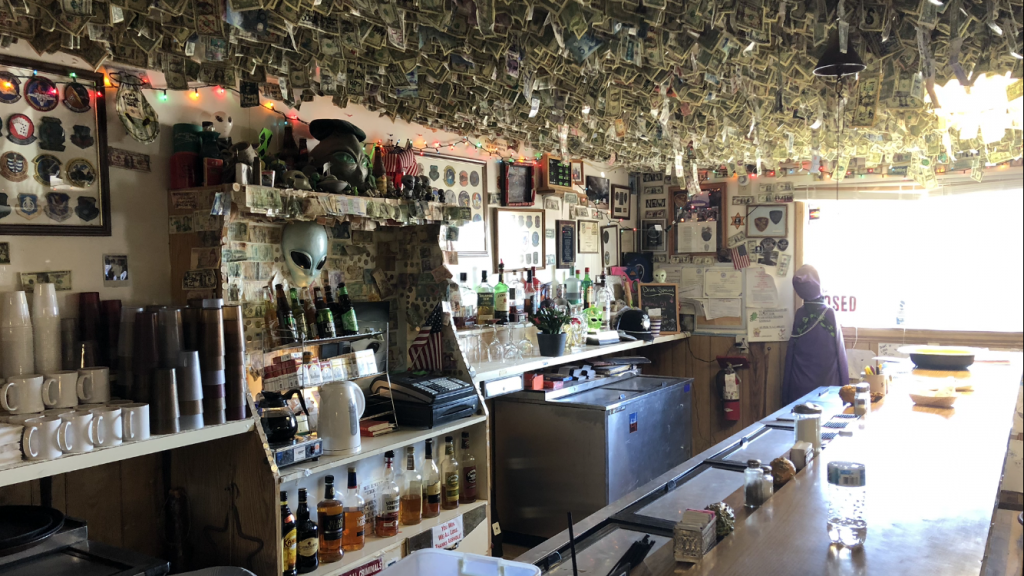 I recommend the Alien Burger complete with lettuce, tomato, pickle, and alien sauce—really great. While waiting, you’ll notice the endless dollar bills that have been signed by patrons and attached to the ceiling. Very cool. You may also want to grab a T-shirt, plush toy, or sticker. There are tons of souvenirs to choose from—I mean, come on, you’ve driven three hours… and it’s three more to get back.

I also recommend you chat up Pat Travis, owner of the joint, who told me about the area.  He may have some special insights on the totally random, sticker-covered mailbox you’ll see on the way to grounds. First of all, it’s hard to imagine anyone actually receives mail from this lonely box. And second, it looks totally out of place sitting in the desert about 30 minutes outside of Rachel, which makes it interesting on its own. 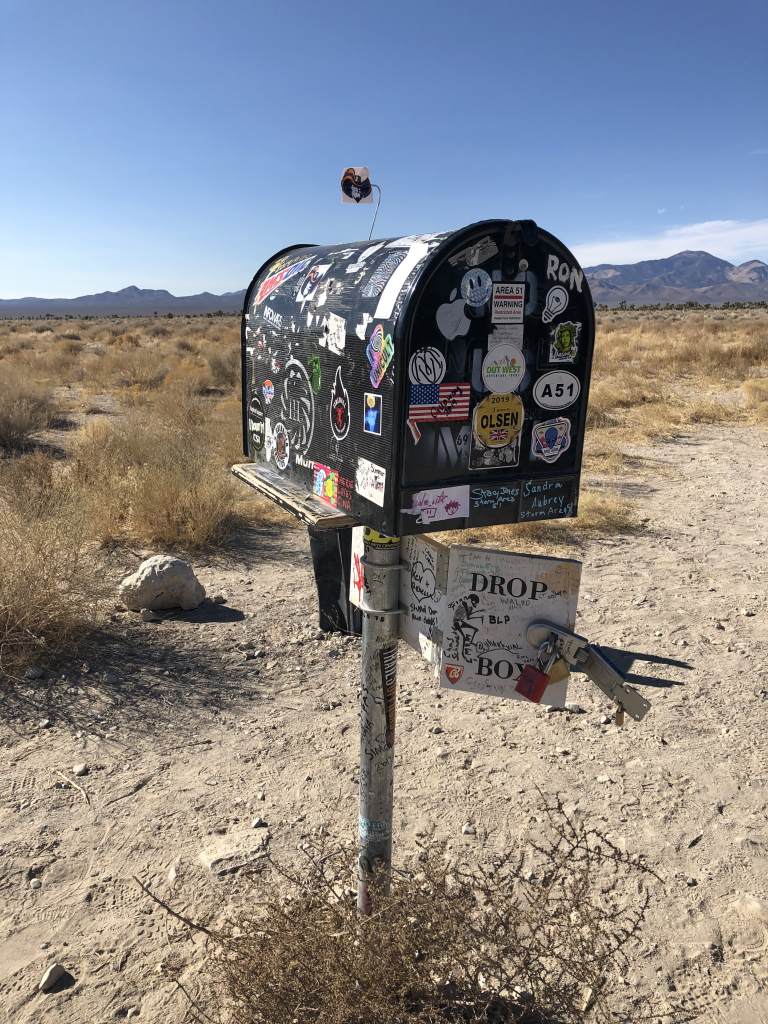 “Some say it’s a marker, and if you look, roads come together from two directions and they say it’s a runway,” she told me.

For UFOs? I asked.

So on the way back, with the sun creeping lower on the horizon, I took a picture of that, too.

In Nevada. In the middle of nowhere.

Next post Thin Crust Or Spin Crust? It's Pizza Acrobatics!