During the summer of 1916, a series of violent deaths shattered the peace of New Jersey’s coastal areas. For 14 days in July, people entered the water at their own risk as five swimmers found out firsthand. Rumors of shark attacks soon circulated.

Nonetheless, the public proved skeptical. Early 20th-century wisdom held that sharks were harmless, and humans ranked at the top of the food chain. Once a finned culprit with human remains in its stomach turned up, though, people started to reformulate their opinions.

Today, movies like Jaws, The Shallows, In the Deep, and Sharknado show just how far our perspectives have shifted when it comes to the ocean’s apex predator. Let’s take a look at where America’s shark fears and fascination originated, sunny Beach Haven.

Sliding Back Down the Food Chain

Located 16 miles (by water) from Atlantic City, the ocean near Beach Haven teemed with swimmers and sunbathers loaded the beach on July 1st, 1916. Suddenly, a bloodcurdling scream pierced the paradisiacal atmosphere.

Local lifeguard, Alexander Ott, and Sheridan Taylor, a bystander, rushed into the water, pulling 25-year-old Penn State graduate, Charles Vansant, from the sea. A shark pursued them back to shore. Vansant bled to death on the manager’s desk at the Engleside Hotel. Yet, scientists initially saw no cause for alarm. They declared his death a freak accident, unlikely to happen again.

Just five days later and 45 miles to the north, the creature struck again near the Essex & Sussex Hotel located in Spring Lake. Swimming about 100 yards from shore, Charles Bruder, a Swiss bell captain, began thrashing in the water. Onlookers thought Bruder struggled with a capsized, red-bottomed boat. Yet, when lifeguards paddled their craft out to assist him, they made a shocking discovery. The red in the water was blood.

Grabbing onto Bruder, they pulled his legless torso into the boat. Bruder’s last words sounded incredulous, “A shark bit me! Bit my legs off!” He died of blood loss before reaching land.

Some now began to articulate the unimaginable. A shark was hunting beach-goers off the Jersey Shore.

Resorts installed mesh barriers in the water near popular beaches, but it was too late to salvage tourist season. Panic took hold. Nobody wanted to get back in the water. Then, the unthinkable happened.

Terror at the Creek

In the small town of Matawan, 30 miles north of Spring Lake, residents read about the two shark attacks in the local paper. They felt reassured by their 16-mile distance from the shore. Instead of ocean swimming, most residents preferred the local creek, a narrow tidal waterway sheltered from open water. Although the creek eventually wound its way to the Atlantic, the distance put people at ease. Swimmers regularly filled its waters.

The idea of a shark attack sounded preposterous to everyone, including retired sea captain Thomas Cottrell. Cottrell changed his mind, however, on July 12th. While crossing a trolley bridge over the Matawan Creek, he spotted the silhouette of a massive shark making its way inland. He ran into town, immediately notifying the police. Yet, they chalked up his observations to heatstroke. That afternoon, Cottrell’s suspicions were confirmed.

At approximately 2:00 pm, 11-year-old Lester Stillwell splashed in the Matawan Creek with his friends near the Wyckoff dock. Suddenly, something pulled Lester beneath the water. Screams filled the air as his head bobbed up and down on the surface. To the horror of his friends, the water turned scarlet.

The boys emerged from the creek in a panic, sprinting into town. Covered in mud and terror, they ran through the streets, screaming for help. A group of townspeople assembled, heading for the creek. Since Lester had epilepsy, they assumed he suffered a seizure.

Among the group was Watson Stanley Fisher, a 24-year-old businessman. He dove into the water, searching for the boy but found a shark instead. The beast clamped onto Fisher’s leg, ripping half the flesh from his thigh. Although he managed to escape and swim ashore, he succumbed to his injuries at Monmouth Hospital in Long Branch that evening.

The Philadelphia Inquirer reported the capture of a “man-eating” shark off the Jersey Shore after the attacks.

The reign of terror by New Jersey’s “Jaws” was not over, though. Less than one mile from Fisher’s attack, and about 30 minutes later, the shark found a new victim. The toothy predator clamped into the leg of 14-year-old Joseph Dunn. Joseph was at the creek with Michael, his brother, and a handful of friends.

Just 10 feet from the shore, Michael and another boy, Jacob Lefferts, grabbed hold of Joseph, locked in a tug-of-war with the monster. Luckily, the boys won. Although shark teeth had sheered much of the flesh from Joseph’s leg, his bones and major arteries remained intact. He required amputation, becoming the lone survivor of the shark’s killing spree.

Despite the mounting evidence, many Americans refused to believe that a shark was capable of such attacks. After examining Charles Bruder’s body, John Treadwell Nichols of the American Museum of Natural History ruled the cause of death attack by a killer whale. Others suggested a massive sea turtle (or school of sea turtles) killed Vansant and Bruder. Scientists had a poor grasp of marine wildlife, let alone shark behavior, at the time. Ocean swimming also remained a new recreational activity in 1916, which meant few encounters between sharks and people had been recorded.

Views began to shift, however, when Michael Schleisser, Harlem taxidermist and Barnum and Bailey lion tamer, hauled in a 7.5-foot-long, 325-pound shark near the mouth of the Matawan Creek on July 14th. The shark attacked and nearly sank Schleisser’s boat before he managed to kill it with the only weapon at his disposal, a broken oar. 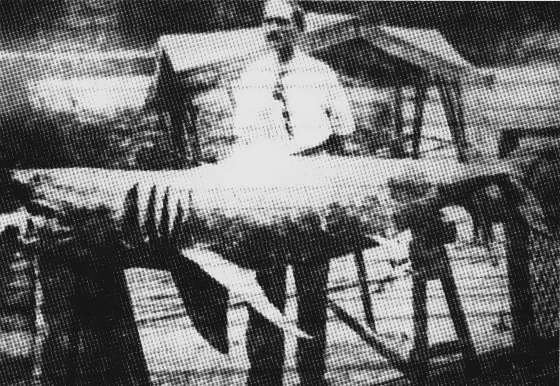 Michael Schleisser and a great white shark captured in Raritan Bay, suspected to be the culprit of the Jersey Shore shark attacks of 1916.

Scientists who examined the body declared it a great white shark. They also found approximately 15 pounds of human bones and flesh in the predator’s stomach. The Matawan Man-Eater had been caught.

Although the identity of the creature behind the attacks could no longer be denied, hypotheses still circulated about what inspired a shark to prey on people in the first place. Some even blamed the taste for human flesh on World War I and the maneuvers of German U-boats near America’s east coast.

A letter to The New Times dated July 15, 2016, argued, “These sharks may have devoured human bodies in the waters of the German war zone and followed liners to this coast, or even followed the Deutschland herself, expecting the usual toll of drowning men, women, and children…. This would account for their boldness and their craving for human flesh.”

Today, our views on sharks have evolved dramatically. Yet, what drove the behavior of the Jersey “Jaws” remains a mystery. Having one individual implicated in multiple incidents is very rare. Only a handful of similar examples exist in history, like the 2010 attacks near Sharm el-Sheikh, a Red Sea resort in Egypt.

Some scientists also question the species of the Matawan Man-Eater. Although identified as a great white shark, the monster’s behavior sounds akin to that of a bull shark, a species known for aggressive attacks and affinity for brackish and freshwater. Some scientists also hypothesize that more than one shark may have been involved in the attacks. Nonetheless, George Burgess, director of the Florida Program for Shark Research, has concluded that the evidence to date still supports the narrative of one great white as the perpetrator.

Next post Traditional Takedowns: The Wrestling Women of Bolivia