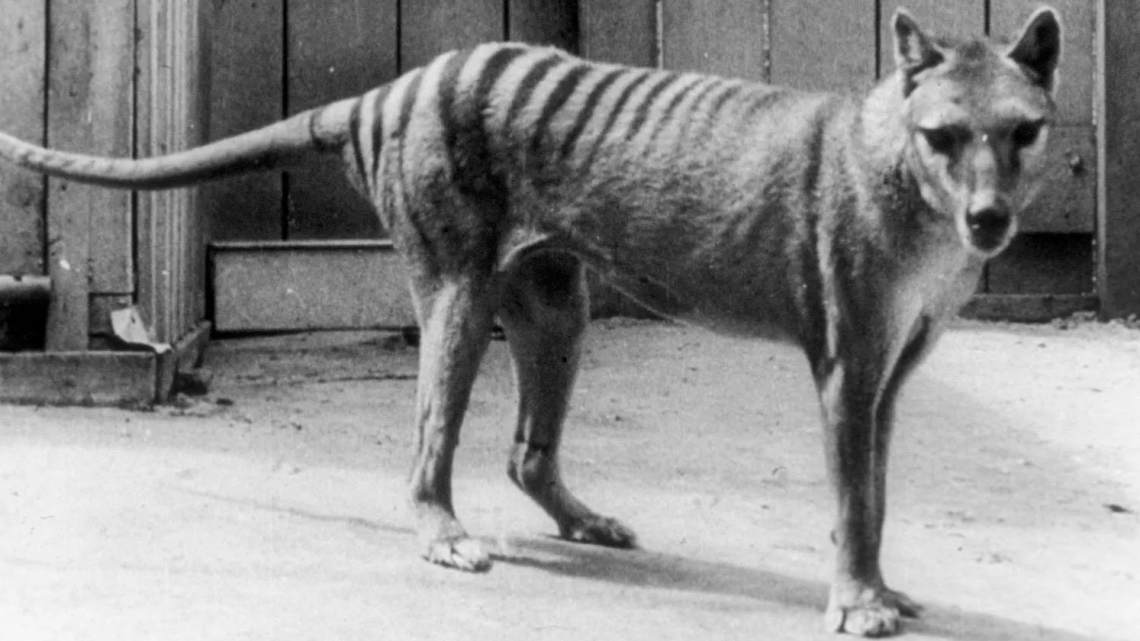 The remains of the last-known Tasmanian tiger (Thylacinus cynocephalus) were recently rediscovered at the Tasmanian Museum and Art Gallery (TMAG) in Hobart, Tasmania, Australia, after they were missing for over 85 years. The skeleton and skin of the four-legged creature were procured by the museum in 1936 but were unidentified until recently, according to TMAG.

Also called a thylacine, a Tasmanian tiger is actually a marsupial and part of the kangaroo family. It has been described as having a wolf-like body with stripes on the back, a possum-like tail, a foxlike face, and a belly pouch.

The last-known Tasmanian tiger died on September 7, 1936, at the Hobart Zoo (also known as Beaumaris Zoo) in Hobart. The recently discovered thylacine is not the same one that was famously photographed and filmed and billed as the last thylacine, according to researchers Robert Paddle and Kathryn Medlock. That famous thylacine was in fact the second-to-last living specimen.

Paddle, a comparative psychologist from the Australian Catholic University, says the last thylacine was a female that was caught by a trapper and sold to the Hobart Zoo in 1936. The zoo did not publicize the procurement of the animal because of the way the thylacine was trapped — ground-based snaring was illegal at the time. The thylacine only survived a few months in captivity, and its body was given to TMAG where it was stored for decades.

According to Paddle: “For years, many museum curators and researchers searched for its remains without success, as no thylacine material dating from 1936 had been recorded in the zoological collection, and so it was assumed its body had been discarded.”

At this stage, thylacines were already known to be rare – but they would not be declared extinct until 1986. Part of the specimen was prepared as a flat skin that showed off the thylacine’s iconic tiger-like stripes. 3/6 pic.twitter.com/QHjIvF0HZb

Medlock, Honorary Curator of Vertebrate Zoology at TMAG, explained that an unpublished 1936/37 report by taxidermist William Cunningham verified the arrival of the last thylacine at TMAG. Researchers then reexamined all thylacine skins and skeletons in the collection and discovered one in the museum’s education department.

The body of this thylacine was skinned, and its skeleton was divided in a manner that would have allowed museum science teacher AWG Powell to share its anatomy with pupils. The taxidermist had prepared the skin so it would be portable and used as an educational tool.

Using real specimens allows museum visitors to get first-hand experience with native wildlife, and in 1937 classes were delivered to some 7,650 children at @tasmuseum. Past generations of children patting her soft fur may explain the wear on the last thylacine’s forehead. 4/6 pic.twitter.com/xuMnb5V0N8

TMAG Director Mary Mulcahy called the discovery of the remains “bittersweet.” She explained, “Our thylacine collection at TMAG is very precious and is held in high regard by researchers, with the museum regularly receiving requests to access our mounted specimens as well as thylacine bones, skins, and preserved pouch young.”

The remains of the last thylacine are currently on display alongside two other extinct species: the passenger pigeon and Carolina parakeet.

A Possible Future for the Thylacine

According to NPR, the thylacine species met its end after the Australian government promoted hunting in order to protect cattle. Researchers have also found that a lack of genetic diversity may have played a role in its extinction.

However, it’s possible that people in the future may have a chance to see a resurrected Tasmanian tiger. Earlier this year, we covered the news of a research group successfully mapping the DNA of the thylacine’s closest living relative — a numbat. Such information could be used to give the extinct mammal a second chance to roam the Earth.