Scientists believe the not-so-little critter slid into a limestone crevice on the bottom of a prehistoric lake and was quickly covered by fine silt and clay, which ensured its preservation.

Before the rest of the world took to the skies with commercial flight, Robert Ripley was already a globetrotting adventurer, collecting stupendous stories, amazing artifacts, and curious curios from every perfectly peculiar corner of this planet. In the spirit of our founder and fearless explorer, each episode of Ripley’s Road Trip will follow journalist and travel expert Aaron Sagers as he heads to a new destination, takes a bite out of the town—and has a bite of the location’s signature food—and uncovers the most Believe It or Not!–worthy artifacts you can only find in those locations, and at different Ripley’s Odditoriums.

Back in 1953, before “Florida Man” was a meme, and before internet memes were even a thing, Robert Ripley added his own delightfully weird chapter to the Sunshine State when he visited a snake and alligator farm in Silver Springs. In a live radio broadcast, he set out to milk rattlesnakes of their venom when he climbed into a pit of 500 of the noisy reptiles. As you might imagine, the timing was, well, not ideal when the lights suddenly went out. Still, Rip was no stranger to danger, and he took it all in slithery stride. He managed to crawl out of the pit and complete the broadcast with the lights back on.

Ripley even shared some of the radio spotlight with Florida’s resident dinosaurs when he told the audience, “Don’t be frightened by all the noise you hear in the background. It’s just the bellowing of the alligators who are all excited by this broadcast from their homeland.” 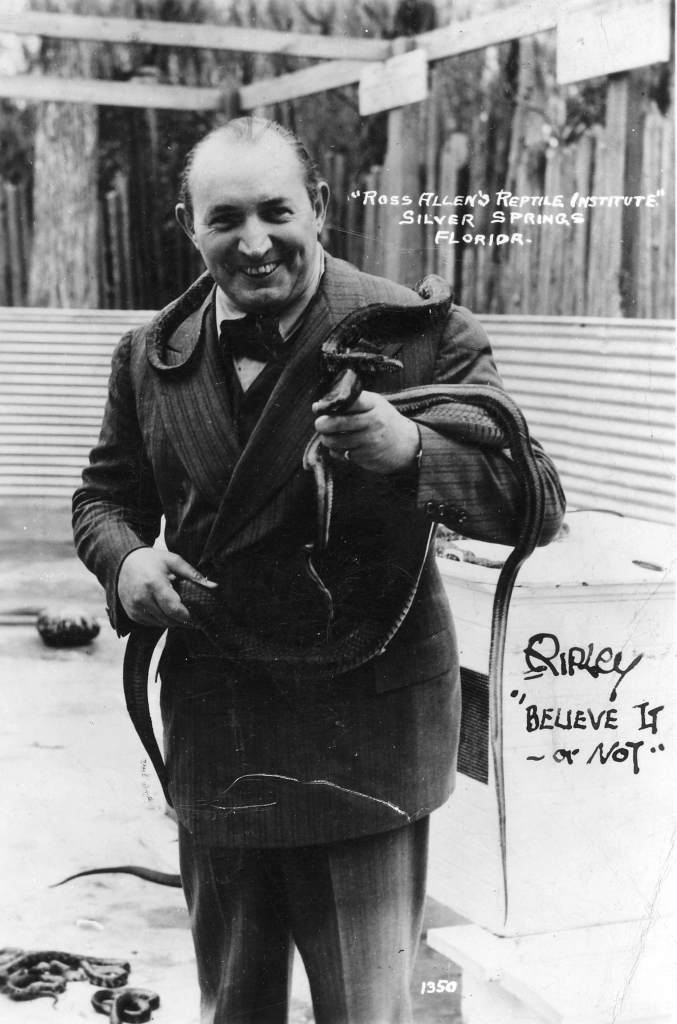 So even though he wasn’t born in Florida—and instead hails from California—Ripley most decidedly earned honorary Florida Man status due to his antics. Now, nearly 70 years later, the Ripley’s Believe It or Not! Odditorium in Orlando keeps Robert Ripley’s spirit alive with the Weird Florida gallery, featuring artifacts that can only be seen in The City Beautiful.

The Weird Florida gallery highlights items with a special connection to the state, such as the shrunken head and torso owned by Key West resident, author Ernest Hemingway. Additionally, because Florida is home to its own swampy Sasquatch legend known as the Skunk Ape, there is a rare Yeti footprint on display next to a mural featuring the creature.

Just as they did in Ripley’s broadcast, alligators get a place of honor in the Weird Florida gallery, and for good reason. The 150-million-year-old reptiles are synonymous with the state and can be found in almost any Florida body of freshwater (including, sometimes, swimming pools). Interestingly, according to the National Parks Service website for the Everglades, “of the 23 different species of crocodilians in the world, two species are native to the United States, and south Florida is the only place where both of these species coexist.”

Plus, they are old-school Floridians and haven’t changed much.

According to Evan Whiting, lead author of two University of Florida studies published in the Journal of Herpetology and Palaeogeography, Palaeoclimatology, Palaoecology, the American alligator (Alligator mississippiensis) one might have encountered eight million years ago, and even close to 30 million years ago, looked about the same as its ancestors in the waters today. Aside from sharks, not many vertebrate species can make the claim they were untouched by major evolutionary change for so long.

Scaling Up The Strange at Ripley’s Orlando

Visitors to Ripley’s Orlando can see for themselves when they check out the fossilized gator on display, one of the most complete specimens ever discovered. Scientists believe the not-so-little critter slid into a limestone crevice on the bottom of a prehistoric lake and was quickly covered by fine silt and clay, which ensured its preservation. It was recovered only a few years ago in Northern Florida, and it retains the interesting orange-brown color of the ancient clay. 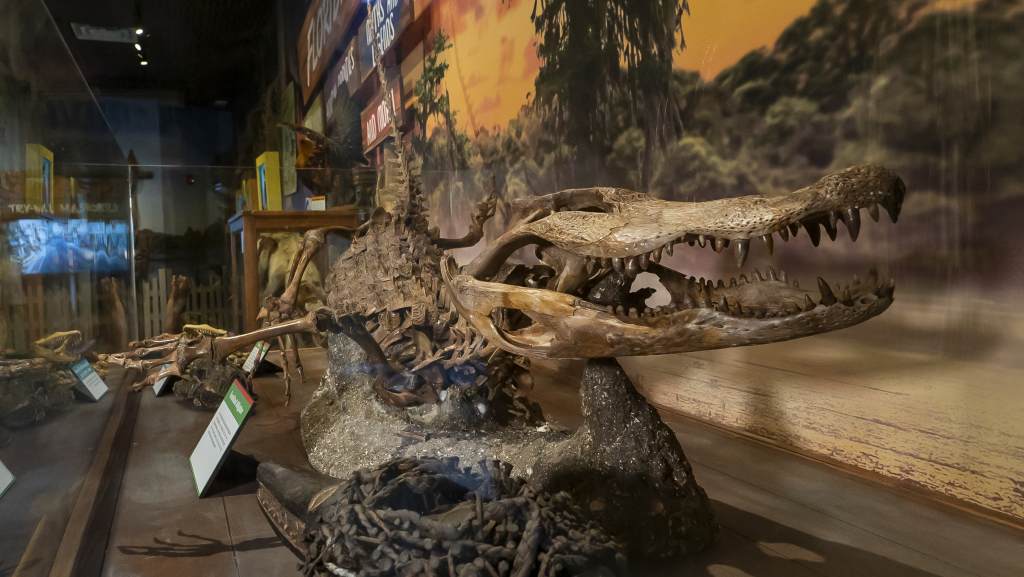 But down in the Everglades, Florida’s alligators share the water with some cousins: the American crocodiles (Crocodylus acutus). Though gators can be found throughout the Southeastern United States, the American croc—not to be confused with the larger, more aggressive Australian and African varieties—does not typically venture north of the brackish or saltwater of South Florida.

On the topic of crocodiles, other fascinating items on display at the Orlando Odditorium are the decorated crocodile skulls, likely from the Iatmul people who live along the Sepik River in Papua New Guinea. While one is decorated mostly with paint, it has cowrie shells in its eye sockets. Meanwhile, another skull is covered in clay and adorned with significantly more cowrie shells. 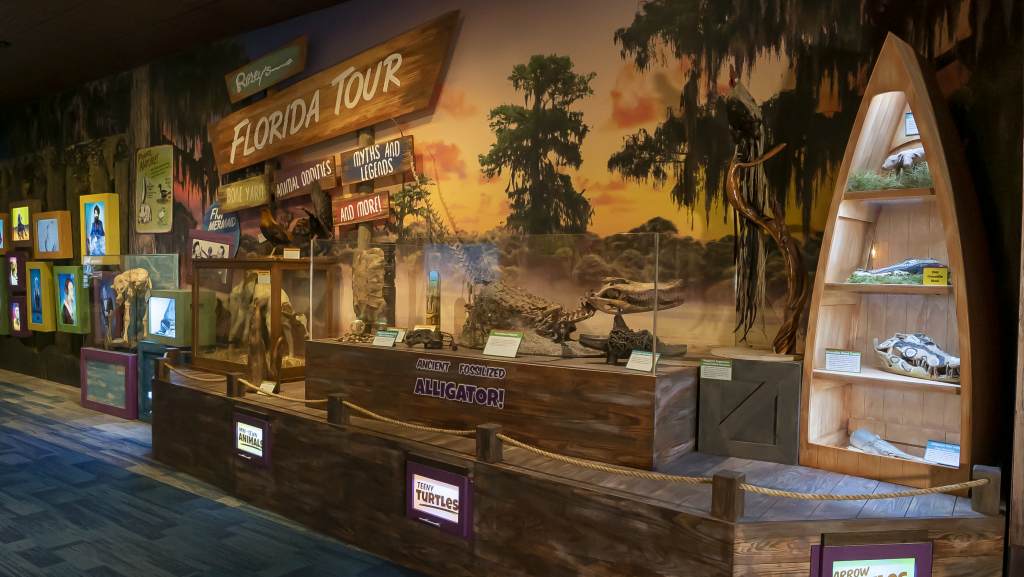 Aside from being artistic, these decorations connect to Iatmul creation stories. They worship the crocodile, and believe life is descended from the beasts. It is said the first woman married a crocodile, and her children were both, alternately, reptiles and humans. Though the father of humans, the crocodile is also feared by the people.

With regards to the indigenous people of the southern states, these ancient monsters were likewise present in lore, and they became symbols for foresight or good fortune. In one tale, an alligator in need taught one hunter in exchange for the hunter carrying him to water—a wise lesson about only killing older bucks who no longer had more to give to the earth. Another story is of a vain gator with pristine smooth skin who got too close to a burning tree, and was burned forever, and that’s why its skin is harsh to this day. And yet another story says the alligator got its bellow after he stole a ball from the woodland creatures, and an eagle sunk its talons into him to retrieve the toy.

These great beasts are so intertwined in the identity of Orlando, and Florida as whole. And the Weird Florida gallery, only at Ripley’s Believe It or Not! Orlando, is the perfect place to flash a big toothy smile and pay homage to the Sunshine State’s resident dinosaurs.

See for yourself with a visit to the Odditorium. And don’t forget to sound off in the comments and across social media to let us know where to go for our next Ripley’s Road Trip destination!

Shop the series that follows host Aaron Sagers as he travels to Ripley’s Believe It or Not! Odditoriums around the country to discover what is unique to each location, from local legends and lore to one-in-a-million exhibits that make for a Bucket List must!

Next post Remains of Christianized Viking Twins Discovered in Sweden

Previous post The Idea That Bullfrogs Never Sleep Is Bull