The Creepy Key West Doll They Say Is Haunted

A young boy named Robert Eugene “Gene” Otto was gifted the doll in 1906.

There’s an eerie toy doll on display at the Fort East Martello Museum in Key West, Florida, that many believe is either cursed by voodoo or inhabited by a ghostly spirit. Robert the Doll has beady black eyes and an impish expression on his face, which is covered in nicks that look like scars. In his hands, he holds a stuffed pet lion, which is also a little bit creepy.

The handcrafted toy was made near the turn of the 20th century. Standing just a little over three feet tall, Robert is stuffed with wood slivers cut from logs. He wears a sailor suit, and his face was initially painted in a way that resembled a jester, according to the Key West Art & Historical Society. 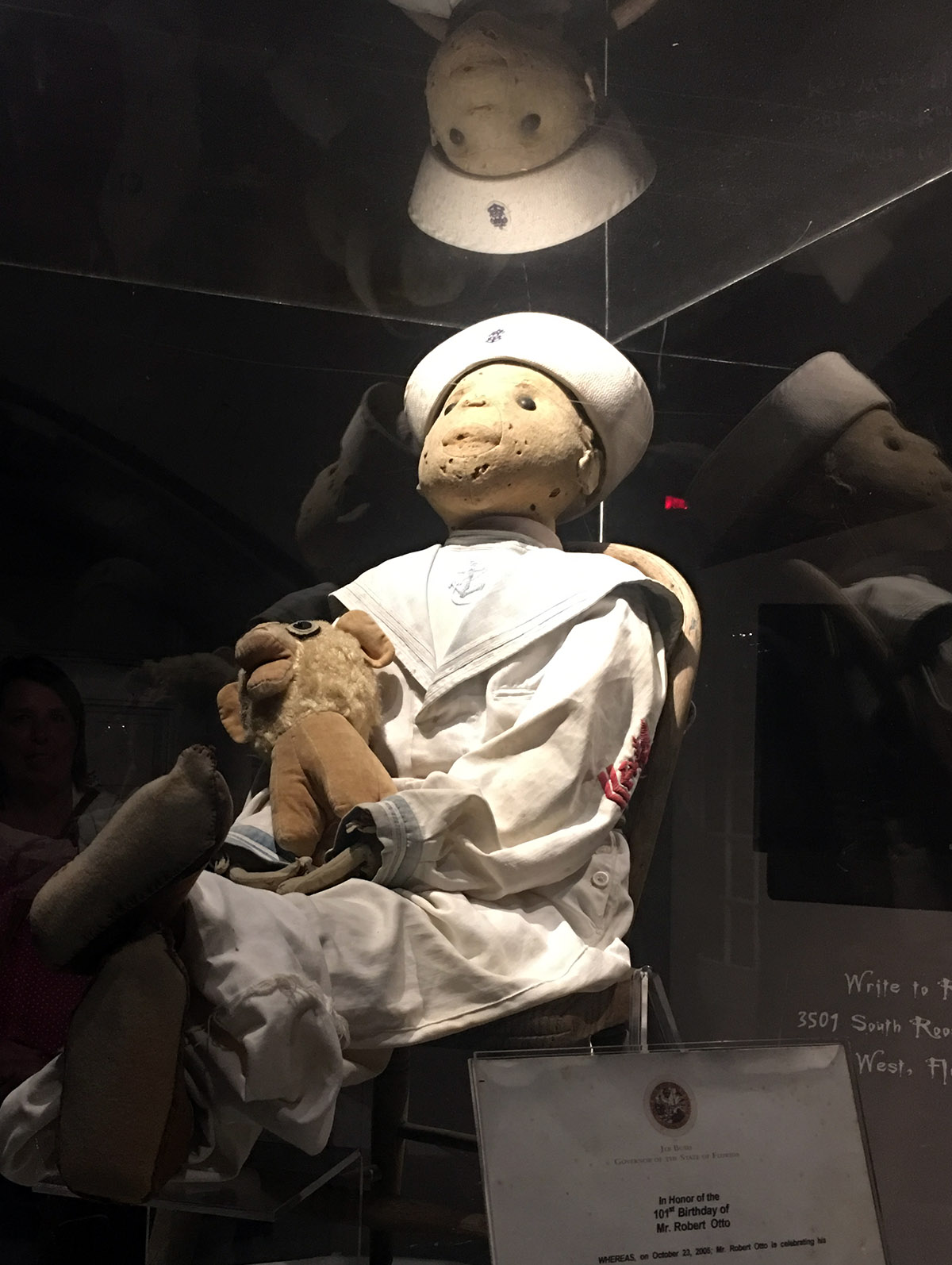 A young boy named Robert Eugene “Gene” Otto was gifted the doll in 1906. It’s believed his grandfather bought the doll in Germany, but others say a disgruntled servant who practiced voodoo gave Gene the doll. Gene and Robert were best friends, and the little boy treated Robert like a living person. Legend has it that Gene’s family and their servants would hear the boy talking to himself in his room in two different voices. When Gene got in trouble, he often blamed Robert for his misbehavior, including an incident in which furniture was overturned in his bedroom.

Some have suggested that Robert absorbed a lot of Gene’s emotional energy during the boy’s life, which made for some strange occurrences. Neighbors said they witnessed the doll moving from window to window. Visitors swore they saw Robert blink and change expressions.

When he grew up, Gene became an artist and designed the gallery at the Fort East Martello Museum. His home was called the Artist House. A woman named Myrtle Reuter purchased the home after Gene died in 1974, and tenants started noticing some odd things, including footsteps in the attic where Robert was kept. A plumber also claimed he heard laughing, and when he looked to see the source, he noticed the doll had mysteriously moved across the room.

A journalist from Solares Hill, Key West, named Malcolm Ross visited Robert and said the doll had a look on his face “like a little boy being punished.” When Ross and a group of people began discussing the doll’s history, it appeared as though Robert was listening to them and his expression changed.

Reuter moved out of The Artist House six years later, and in 1994 donated the doll to the museum. She told the staff the doll was haunted and that he traveled around her house by himself.

Word of mouth about Robert the Doll compelled people to visit the museum, prompting the staff to put him on exhibit. Visitors’ cameras and other electronic devices mysteriously started jamming around him. Before long, the museum began getting letters addressed to Robert. People apologized for disrespecting him and asked for forgiveness, believing he hexed them or caused them bad luck. Even today the museum receives correspondence for Robert on nearly a daily basis, which it collects and catalogs. Some people even send him candy, money, and joints. 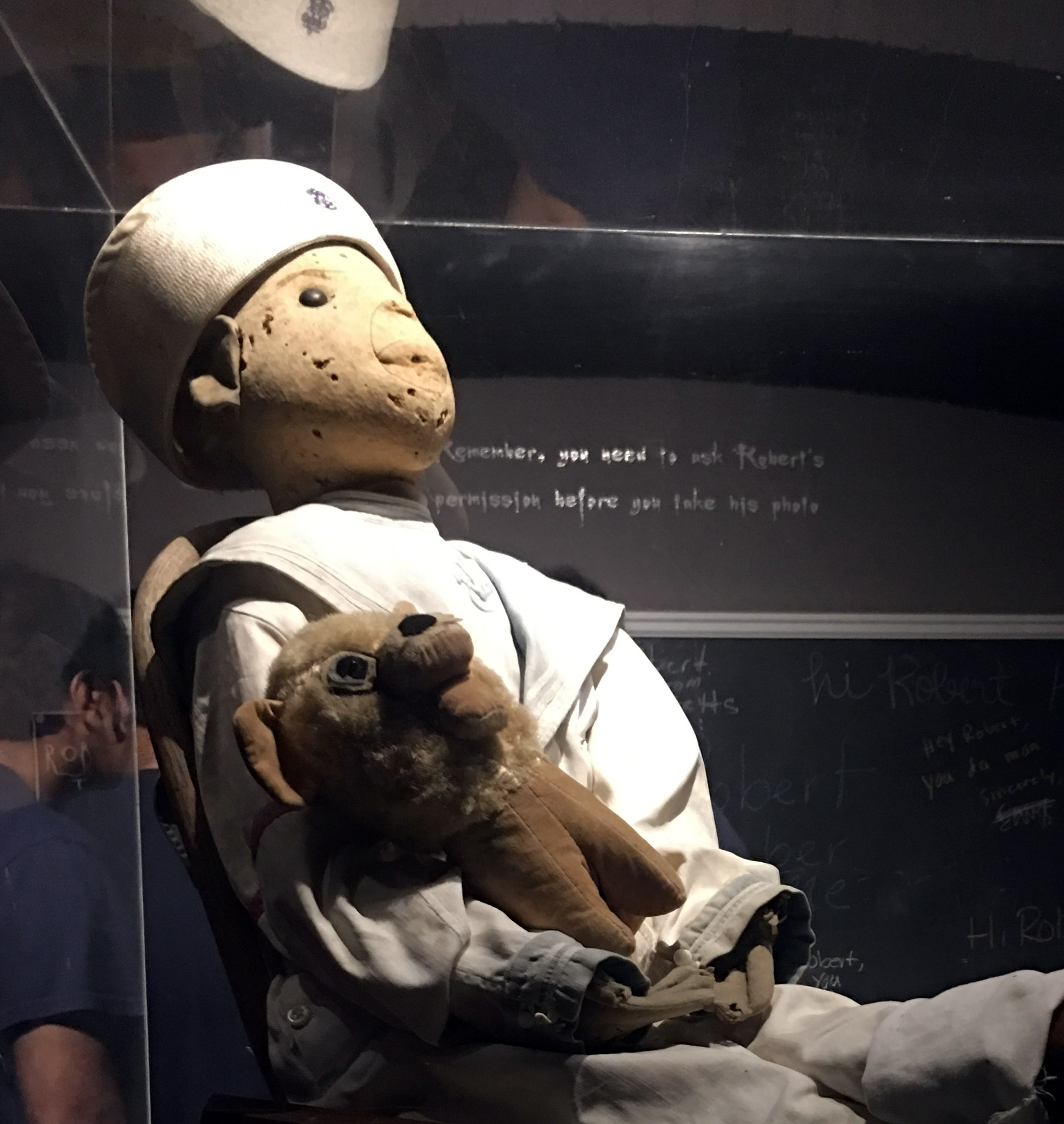 Robert has become somewhat of a celebrity outside of his native Key West. He’s appeared on television, is part of a ghost tour, and had a 2015 movie based on him. A creepy mini version of Robert is for sale through the museum. He is also very active on Facebook.

Earlier this year when Robert reprimanded a thief for stealing the video player from his exhibit, true believers expressed their disbelief on Facebook, writing comments such as: “Let the bad luck commence!” “They’re messing with the wrong doll!” and “Hell hath no fury like Robert scorned!”

Another added, “While I’m not one who is superstitious and I don’t believe in ghosts, there are way too many coincidental things that happen with Robert. That said, not even I am dumb enough to mess with Robert the doll!!!!”

It’s unclear whether Robert is cursed, inhabited by the spirit of his good pal Gene, or possessed by something else. Or it could simply be that people’s rich imaginations have made him come to life.