In honor of International Women's Day, we're taking a look at the real life inspiration for the Rosie the Riveter poster. 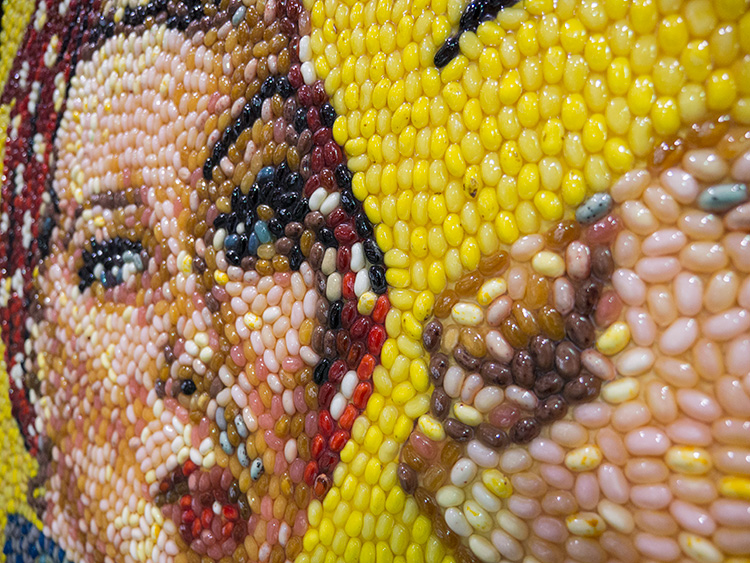 Rosie the Riveter made of Jelly Beans

Did you know Ripley’s has a recreation of the famous Rosie the Riveter poster made completely out of Jelly Belly jelly beans?

The Rosie picture is one of many pieces of Jelly Bean art created by artist Kristen Cumings. The piece took 100 – 150 hours to complete and used around 12,000 jelly beans. The most common flavors used were Banana, Sunkist Lemon, and Pine Colada for the background. Cumings began making jelly bean art for Jelly Belly in 2009 and has produced portraits of celebrities and pop culture icons as well as recreations of classic paintings. With the bright yellow background, brilliant red bandanna, and classic “We Can Do It!” slogan, Rosie was a perfect source of inspiration.

In honor of International Women’s Day, we’ve decided to look deeper into the story behind Rosie the Riveter. 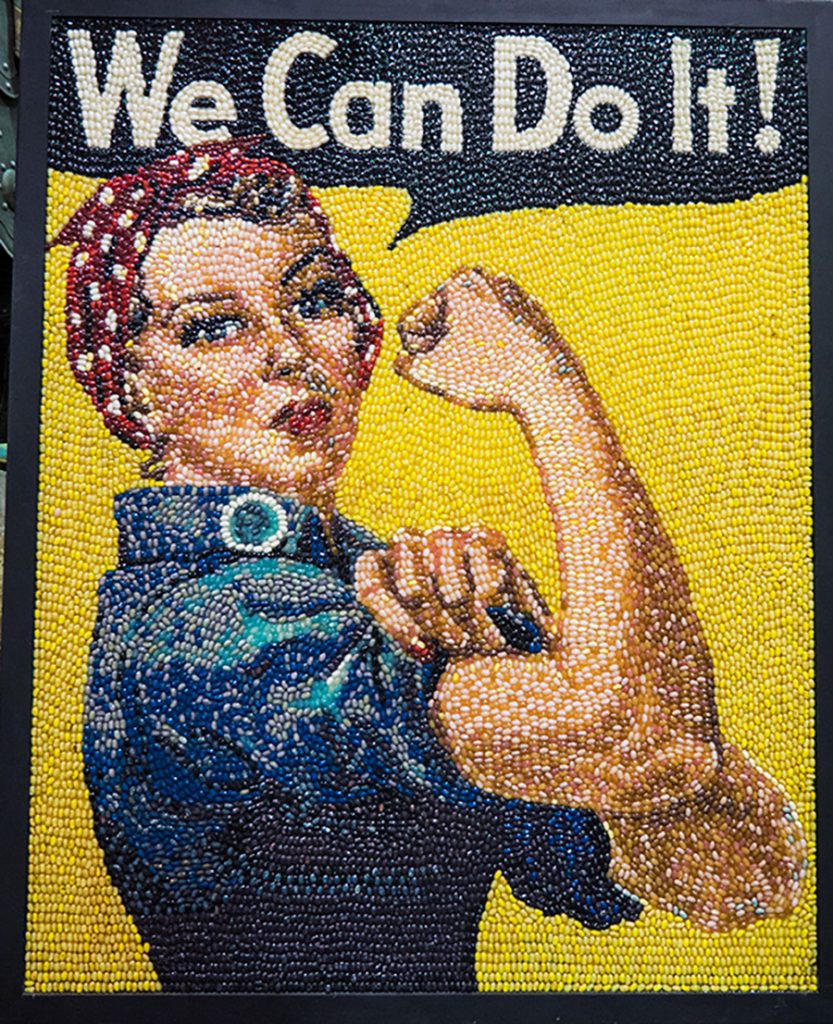 Geraldine Doyle was the person most commonly attributed to being the inspiration for the Rosie the Riveter poster.

Born in Michigan in 1924, Doyle started working as a metal presser in an Ann Arbor factory after graduating from high school. She was working in the factory in the midst of the Second World War. Because of the draft and just general enlistment, the domestic workforce had been depleted of the men typically within it. As a result, women flooded into the work place in jobs they generally hadn’t held before.

At this time, the US government was interested in boosting the moral of these workers as well as recruiting more women for work in an effort to meet the demand of supplies needed to further the war effort. Artist J. Howard Miller was commissioned to create morale-boosting posters.

As legend has it, Miller was looking through photographs taken by United Press when he saw one of a young woman in a polka-dot bandanna and working a lathe. This woman became the inspiration for Rosie the Riveter.

Doyle came across the photograph, and a depiction of the “We Can Do It” poster in a magazine in the 80s. Feeling as though she recognized herself in both images, she asserted that she was the real life, Rosie.

The problem with naming Geraldine Doyle as the sole person behind Rosie is that the image in question isn’t even of her. The woman at the lathe was actually Naomi Parker.

It took years for Parker’s family to come forward and attempt to set the record straight. But ever since they have, the question of who the real Rosie is can’t be ignored.

Will the Real Rosie Please Stand Up

Rosie the Riveter’s iconographic status means a lot of people might want to make the claim that they were her. But the poster captured a time in which there were more women in the workforce than ever before. And the poster’s adoption as a feminist symbol allows it to stand for all women.

Geraldine Doyle and Naomi Parker are not the only two women who have a claim to Rosie. Countless women were working in factories during WWII. In some way, all of them are Rosie.

The US Library of Congress recently enhanced it’s collection of photos of women working in factories during this time. The result is a stunning collection of work that embodies the heart of International Women’s Day, and the spirit of Rosie’s “We Can Do It!” 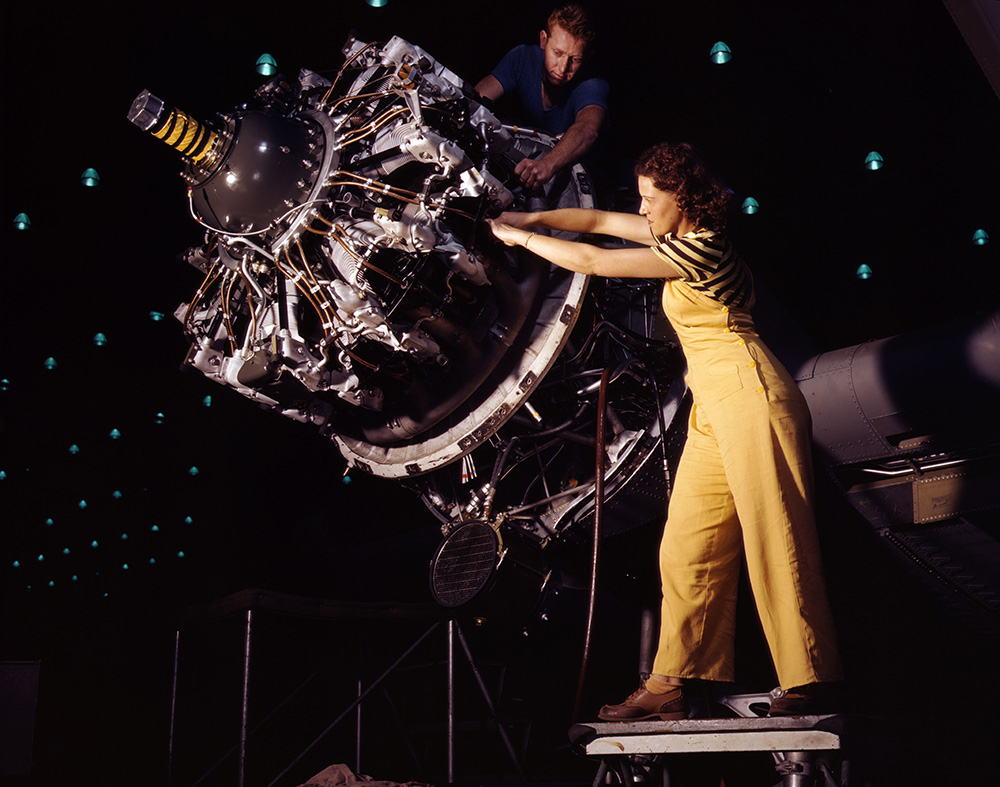 Training of a female worker at the Douglas Aircraft Company, 1942 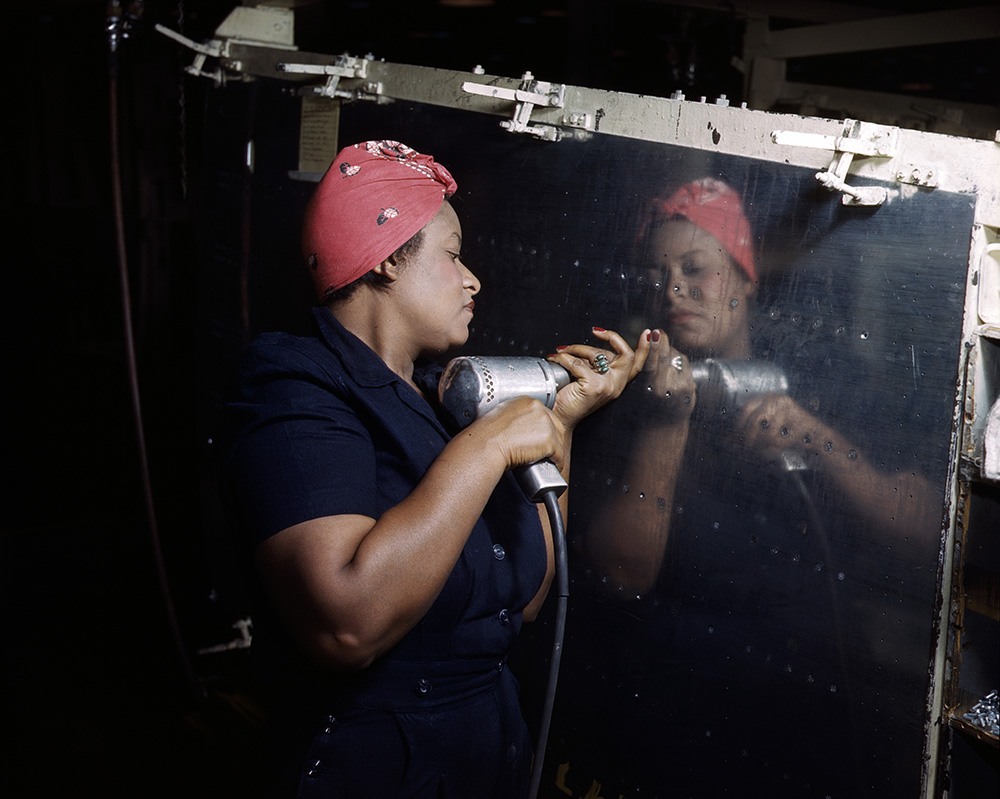 A real-life “Rosie the Riveter” operating a hand drill, 1943 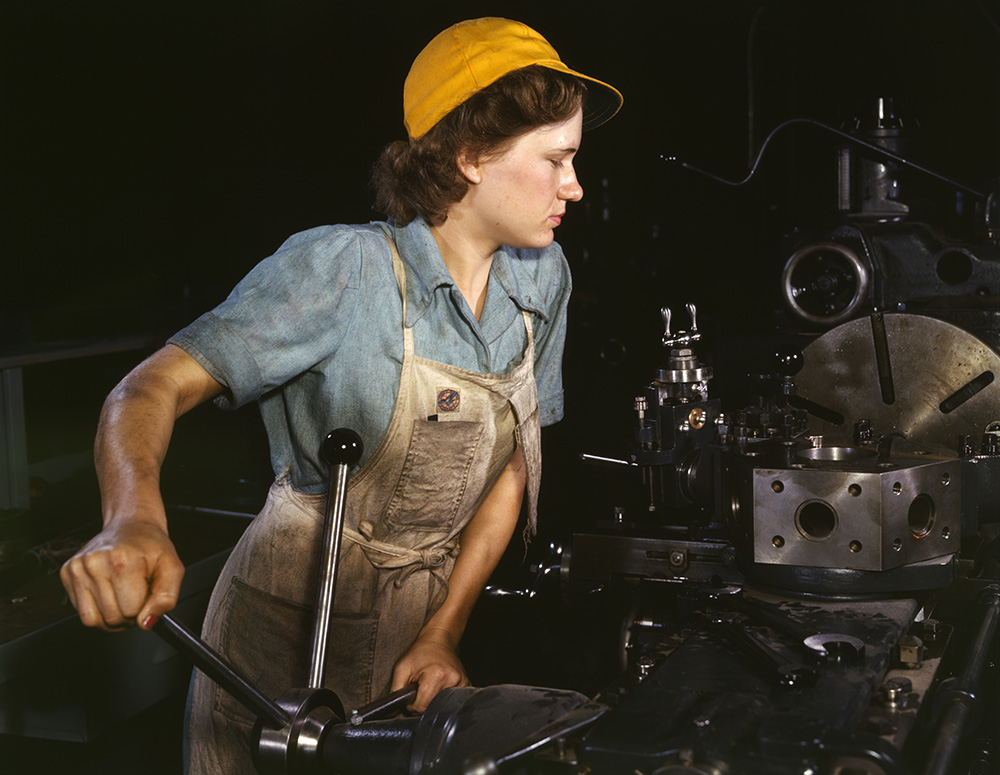 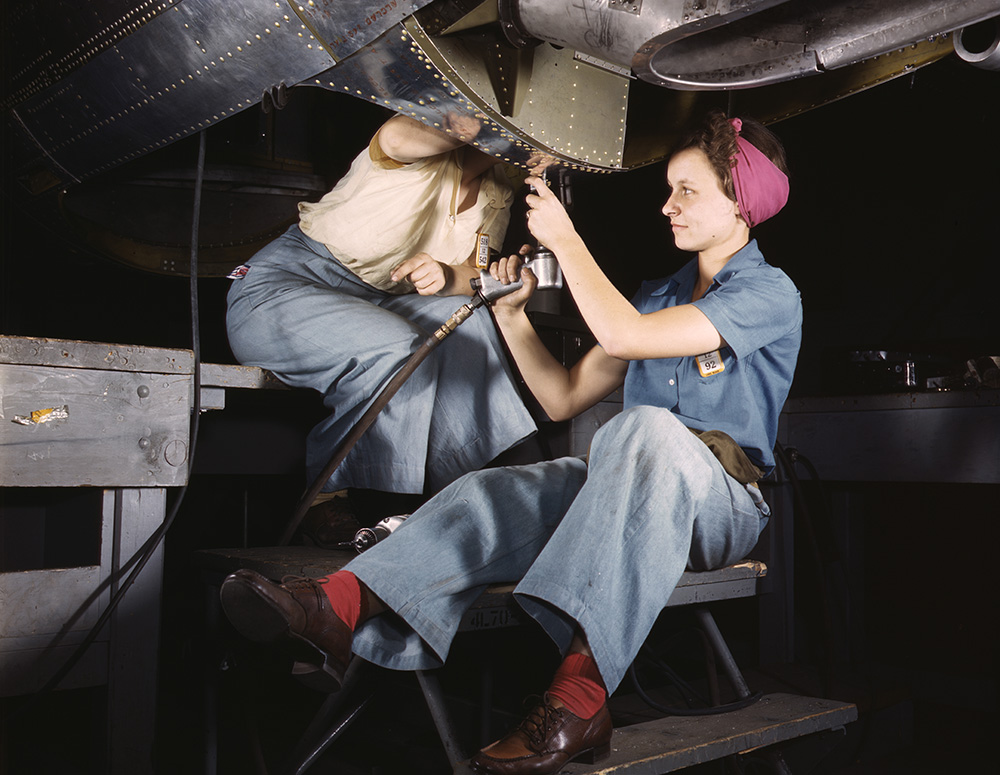 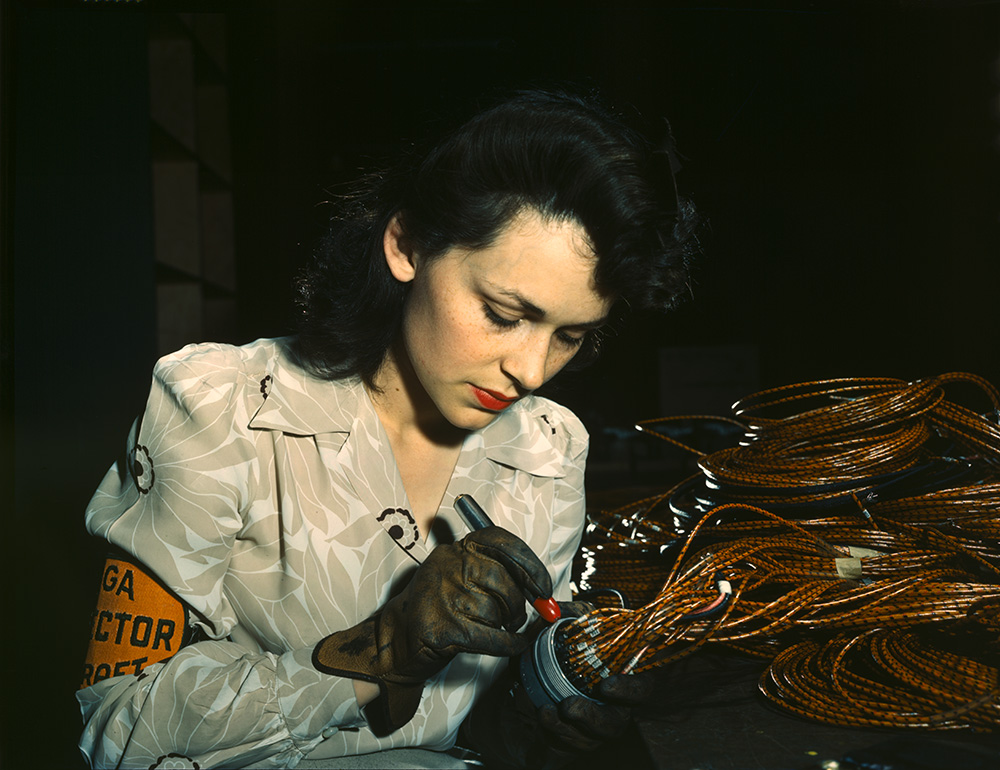 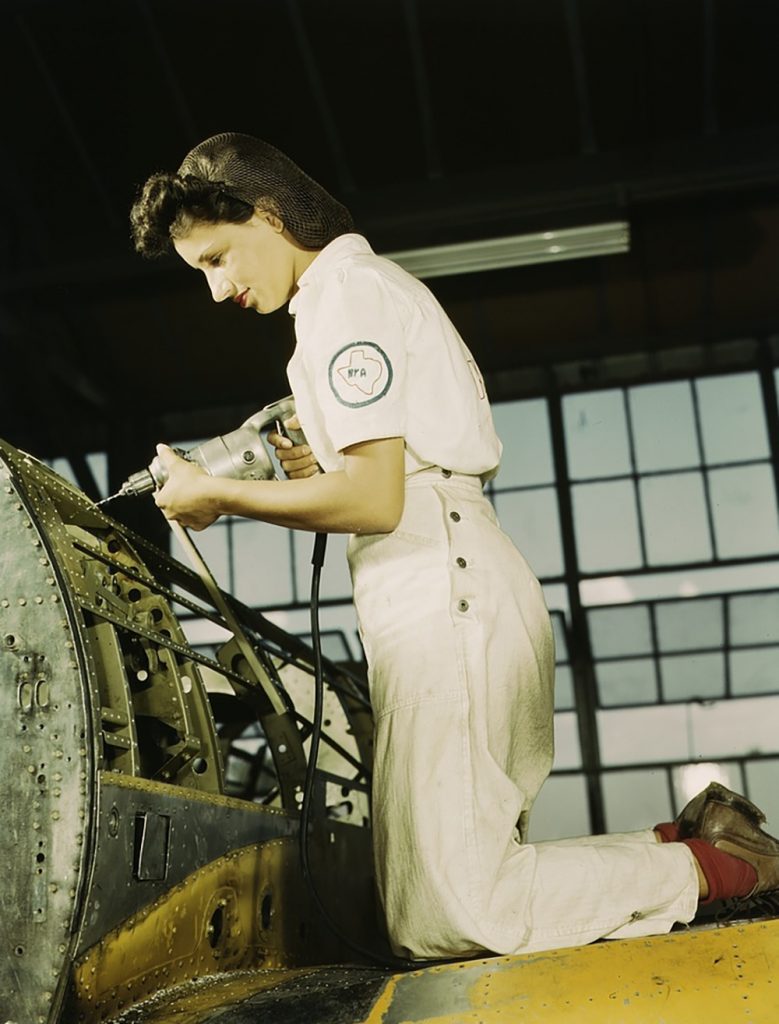