Hold fast was actually believed to help a sailor keep a grip on rigging. 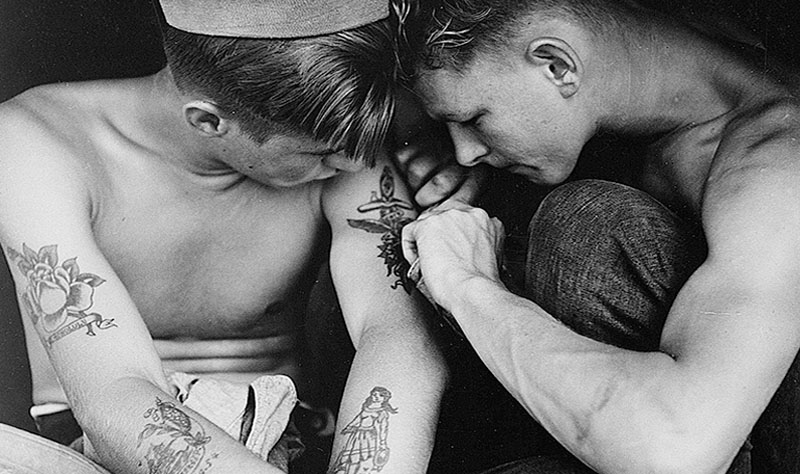 Sailors are renown for two things: their tattoos and their strict adherence to superstition, but did you know the two are often one part of the other?

Inked sailors date back thousands of years in ancient China, and it’s believed that Captain Cook’s voyage to the Pacific Islands popularized the practice with western sailors.

Once they became popular, complex systems of meanings and associated superstitions developed within sailor culture, and today the sailor’s tattoo has become popular with tattooed landlubbers as well. 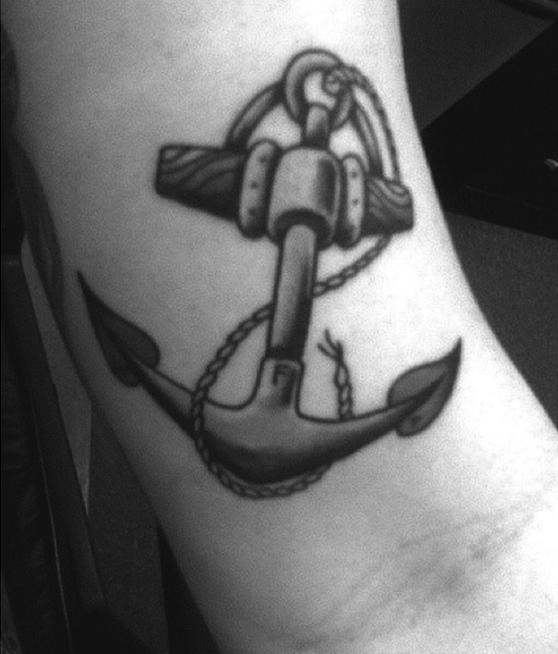 Anchor: Anchors were symbols of stability to sailors and were often accompanied by “Mom” or “Dad”, authority figures likened with a seaman’s stability. Anchors also could mean that a sailor had crossed the Atlantic and returned safely. Eventually, merchant marines would adopt the anchor as a de facto badge of membership.

Crossed anchors: A pair of anchors crossed on the webbing of the hand—between the thumb and index finger—meant you were a boatswain’s mate. A boatswain was the foreperson on deck, in charge of managing the crew on duty and directing any rigging, anchoring, or cabling of the ship.

Crossed cannons: A pair of crossed cannons designated military service among sailors. Though you might think of an old naval warship equipped with just cannons, many early navies also used sharpshooters on deck and in rigging to fire at enemy ships’ decks. In some cases, crossed guns could mean a sailor was such an appointed sniper instead of a cannoneer. 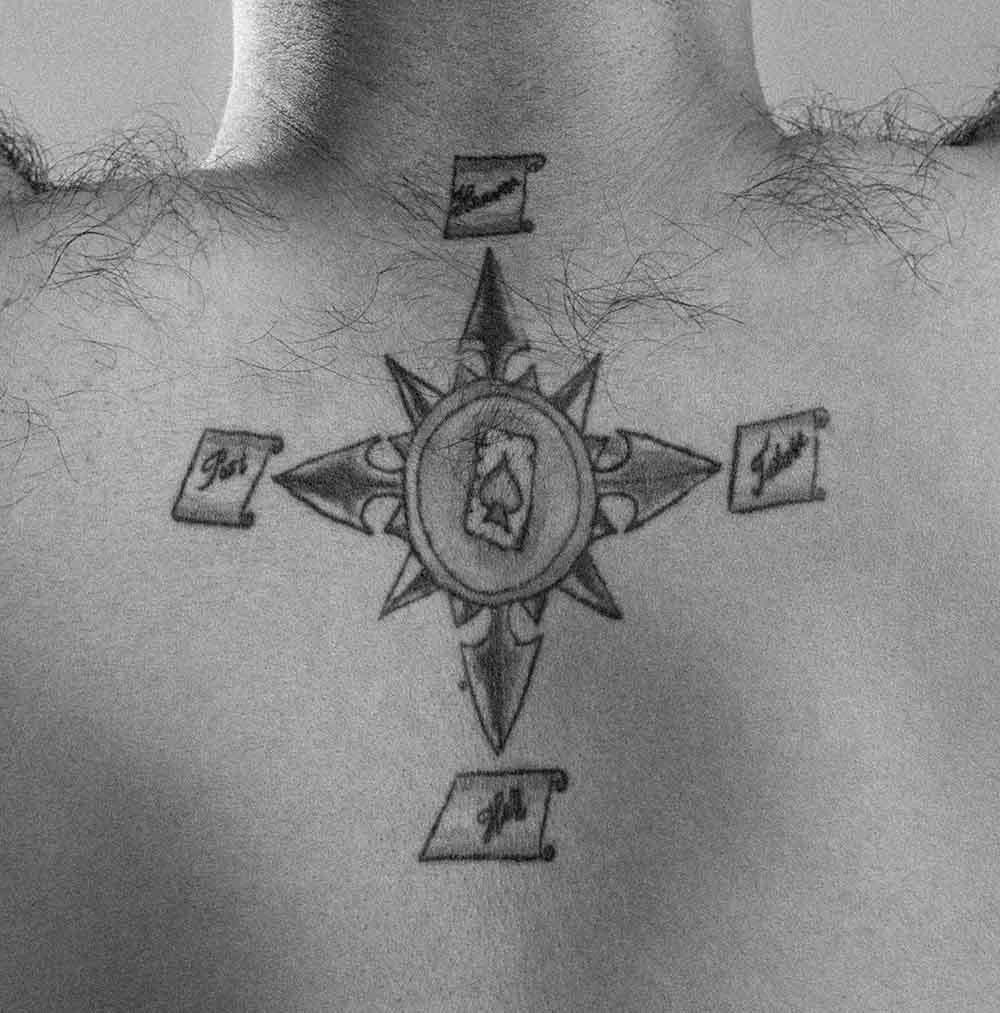 Compass Rose: Not all tattoos were supposed to mark service or accomplishments; some tattoos were meant to act as talismans of protection for the sailor and ship carrying them. A compass rose may not have actually worked as a compass but was supposed to help keep sailors from getting lost, and remind them of the way home.

Star: A star, much like a compass rose, was a safeguard against being lost at sea, but instead was meant to protect a sailor lost overboard or otherwise stranded at sea. 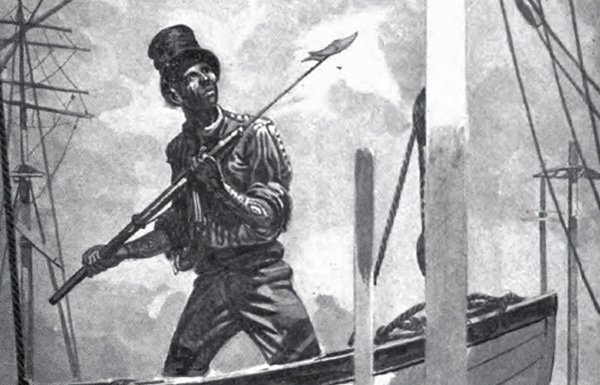 Harpoon: Harpoons were a direct reference to whaling and as such were symbols of time aboard a fishing boat or service in a fishing fleet. Though the harpoon was simply a tool of the trade, many eventually came to associate it as a symbol of protection against vengeful whales and sea monsters.

Fully rigged ship: A fully rigged ship was evidence that a sailor had crossed the dangerous waters of Cape Horn, also known as Tierra del Fuego—Land of Fire. Occupying the southernmost tip of South America, Cape Horn was dreaded by many sailors; the rough waters required a ship to travel under full sail. Mutinies have even been recorded against captains ordering the navigation of these notorious waters.

Turtle: Turtles were well known by sailors for being stalwart travelers of the sea, and turtles were the mark of a sailor who had crossed the equator. The visage of King Neptune was also a symbol of this feat, and some sailors even got tattoos of both to mark their achievement. 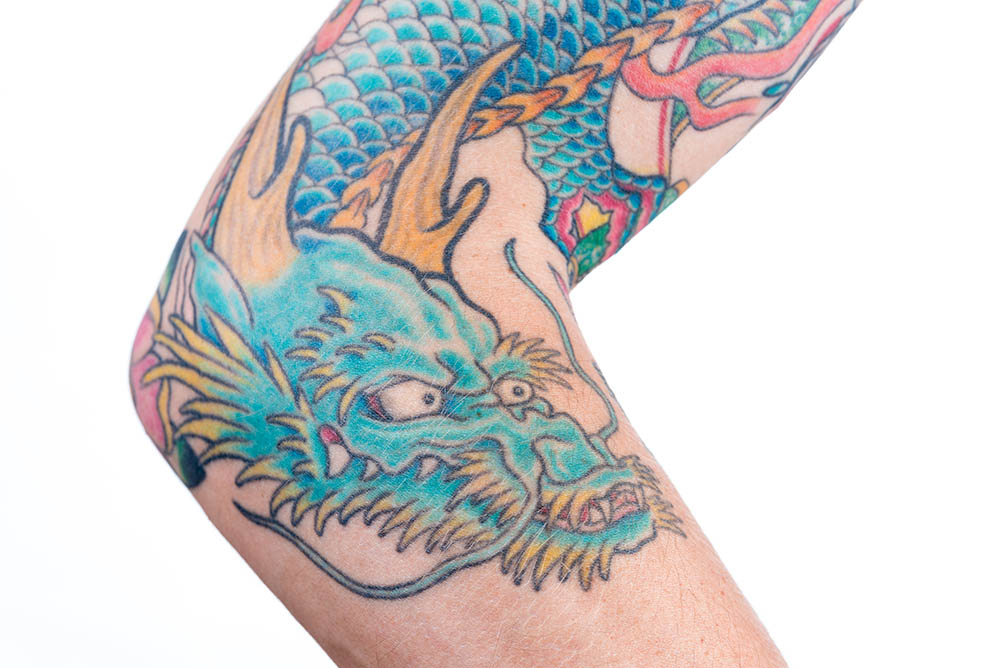 Dragon: A Chinese dragon celebrated a sailor’s trip to the Orient, and a golden dragon meant they had crossed the International Date Line. Dragons have long marked the backs of sailors and pirates in the Asian Pacific. Asia was the birthplace of the original marriage between sailors and tattoos, but as time went on, many countries in the region began associating tattoos with pirates and brigands, eventually outlawing tattoos.

Hula Girl: The hula girl was made popular by tattooists like Sailor Jerry, who helped popularize tattoos among Navy soldiers during World War II. A hula girl meant a trip to Hawaii, and to many soldiers was a reminder of the attack on Pearl Harbor. In the early 1900s, the US Navy banned what it deemed as salacious tattoos, and some artists popped up with specialties in “adjusting” tattoos for modesty. 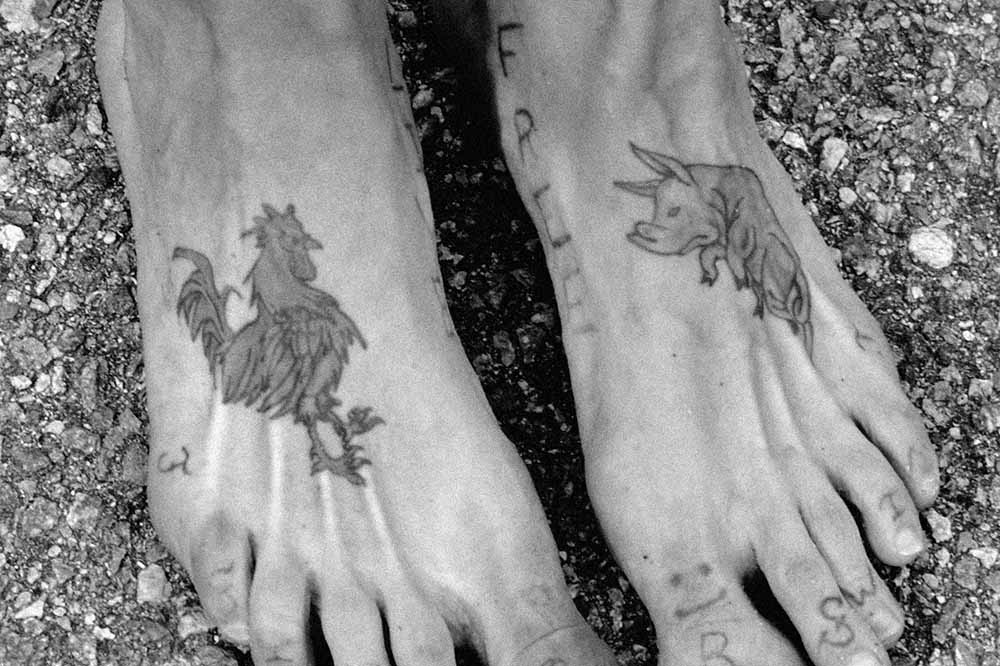 Rooster and pig: A rooster tattooed on one foot and a pig on the other was believed to keep a sailor safe from drowning. Chickens and pigs were thought to often survive shipwrecks and were sometimes found at sea. This most likely was due in part to them being boarded in wooden crates, but the belief persisted into World War II when many soldiers got this tattoo. They believed putting the tattoos on their feet would keep the ocean from pulling them down.

from “Master and Commander”

HOLD FAST: Hold fast written on your knuckles was meant to help you do just that—hold fast. A charm on the fingers to keep ropes from slipping through them; a seaman’s dexterity with rope was what earned his salt. A rope around  the wrist or a knot on the forearm was also worn by deck hands and dock tenders. 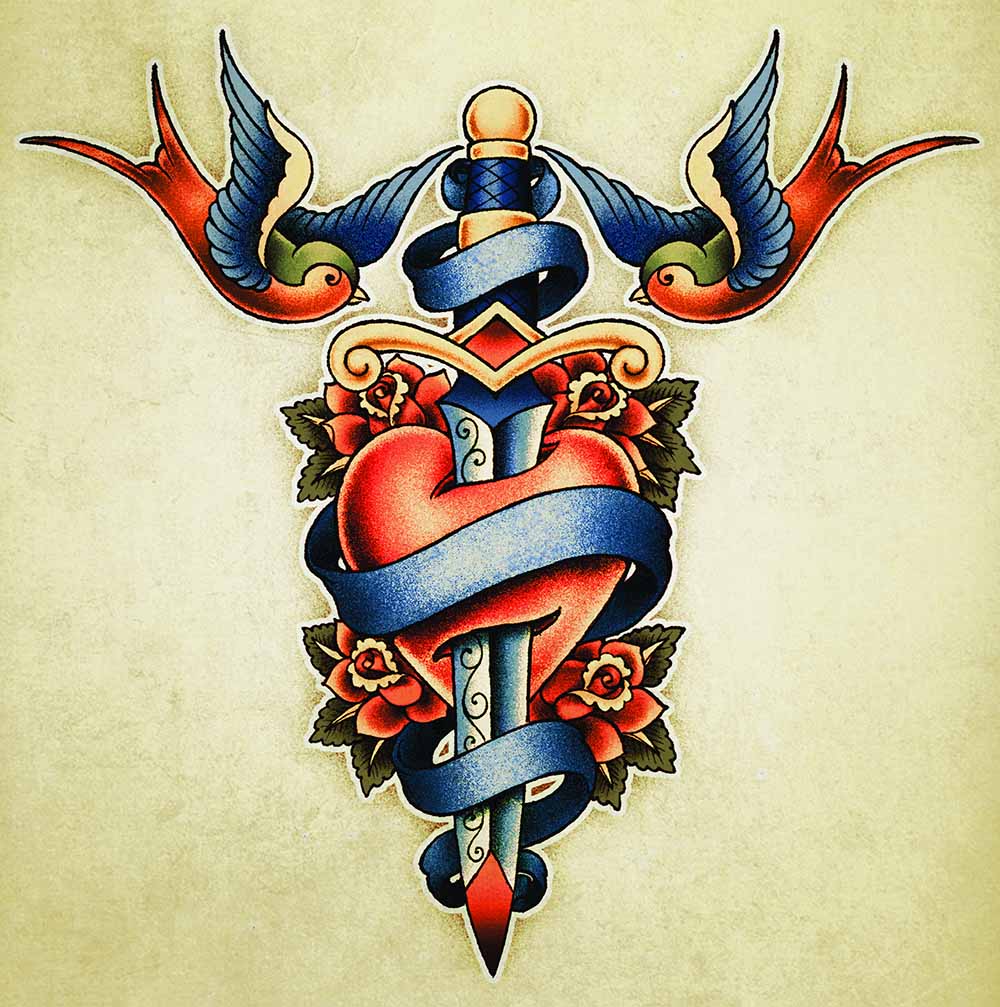 Swallows: A sailor normally got a swallow when he first left home. The swallow was a symbol reminding the sailor of home and was believed to be a talisman that would carry the sailor’s soul to their home of they died at sea. After the first swallow, each additional swallow marked 5,000 nautical miles traveled at sea.

Tattoos, of course, aren’t the only symbolic practices in sailing culture. The golden hoop earrings synonymous with pirates and brigands were often thought to be a way to pay for a funeral if a sailor died, or even as a safeguard against drowning.

If those ideas seem to be counter to each other, the almost global diversity of sailors has made many superstitions that aren’t just different, but sometimes the exact opposite of each other.

Whistling, for example, was thought by some to be bad luck, thinking that the wind would see whistling as a direct challenge and summon mighty storms. Others, however, believed the wind liked whistling and would ensure a good wind. In either case, galley cooks were often encouraged to whistle—as a means to ensure they weren’t stealing food.

Previous post Children in Atule’er village Climb 2,600 Feet to get to School