[Season 1 – Episode 2] In today's show we talk about a 400 year old Chinese shrunken head, spotting a fake, and how sloths & Nazis are tied to shrunken heads. Let's explore that together!

A 400 year old Chinese shrunken head, spotting fake heads, shrunken faces in Siberia, plus how sloths & the Nazis are connected to shrunken heads. Let’s explore that together! 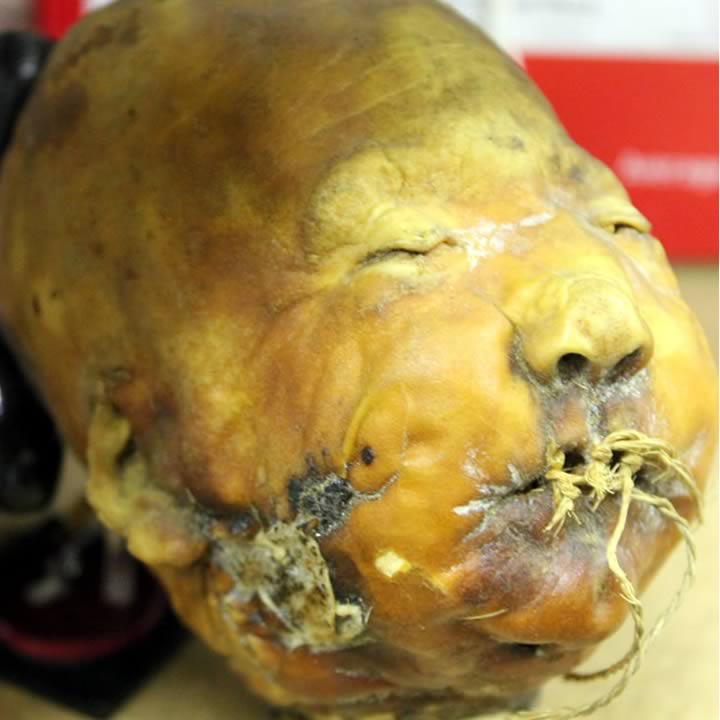 How did a Chinese man get his head shrunk in South America around 1600 AD?

Early historical records place Chinese and Filipinos reaching Central and South America on ships from the Manila Galleons Spanish trading route. Trade with Ming China via Manila served as a major source of revenue for the Spanish Empire.

This one-of-a-kind Chinese shrunken head has been carbon dated with a 95% degree of certainty by two independent labs and dates back to the 1600’s. That makes it around 400 years old!

So, what was Mr. Suōxiǎo tóu doing in South America? That’s not his real name by the way, it just means “Mr. Shrunken Head” in Chinese (thank you Google translate) He may have been a missionary or a merchant bringing goods from the Americas back to China. 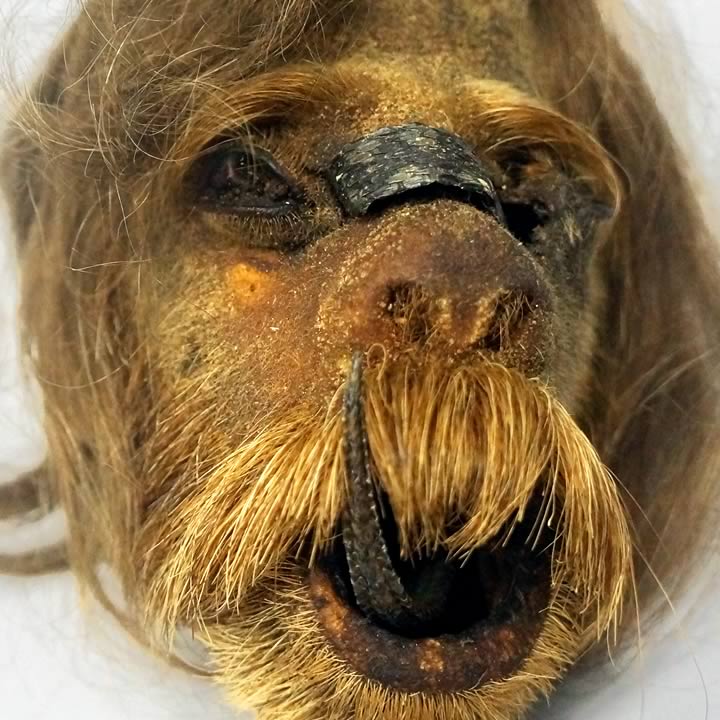 Shrunken heads in Siberia? What the what!?

You probably have never heard of Russian biologist and parapsychologist Alexander Wassiliewitch Barchenko. Yeah, I didn’t think so. He was part of a Soviet expedition around the 1920’s looking for paranormal and semi-mythic artifacts in the far flung parts of Siberia. Like the Nazis, the Bolsheviks were obsessed with the occult and anything that may bring them more power.

Barchenko and his expeditionary team retrieved, among other things, this utterly disturbing shrunken face.

Wait, what? Did you just say “face”? Remember the scene in the movie Silence of the Lambs when Hannibal Lecter escapes by placing the face of a police officer over his face as a meat mask? Enough said **shiver**

Used for Shamanic rituals to communicate with the spirit world, these unique shrunken faces do not appear to be the by-product of tribal traditions, but of a more sinister and gruesome activity. 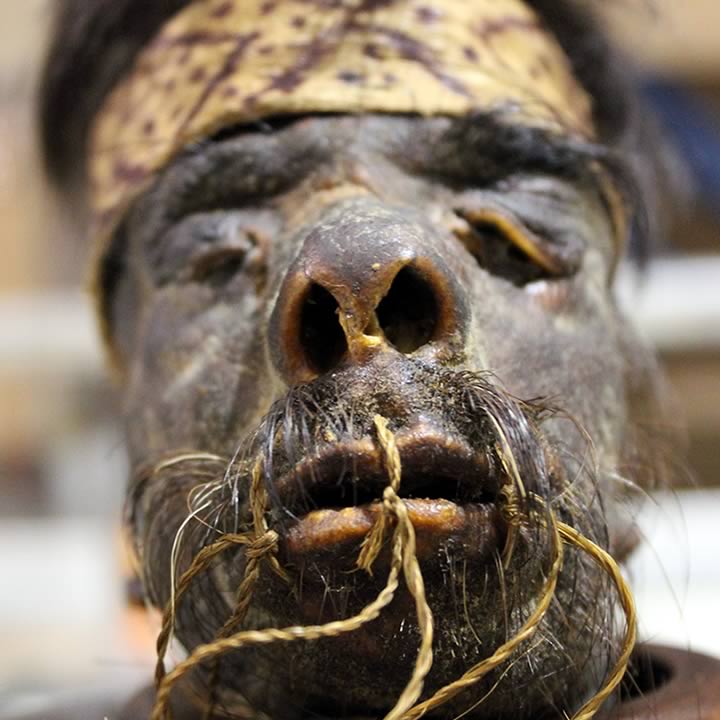 How can you tell if you have the real deal or just a fake?

Did you know there are three types of shrunken heads? Tsansas, False Heads, and Non-Ceremonial Human Heads.

Real, but non-ceremonial shrunken heads, were made for the tourist trade. Oh yeah, “souvenir” shrunken heads were made with an effort to retain realistic proportions dictated by the demands of tourists more concerned with human-looking shrunken heads than authenticity.

Of course, because never mind the fact that you are getting the head of a real human as your personal vacation tchotchke.

False heads, are just non-real imitations made from molded animal skin. I think we sell these at some of our famous Odditoriums as a memento of your visit. They tend to lack detail, the mouth is just a slit with ridges and the ears have no structure or even a hole, and the hair is glued on. They are also much lighter in weight than the real ones. 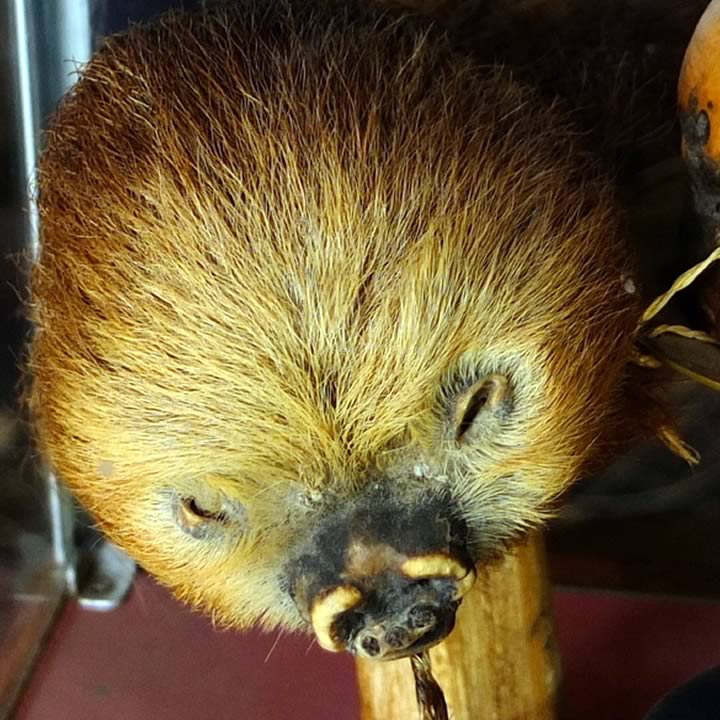 Sloth heads were used as substitutes for human heads

Much like tofu is used as a poor substitute for meat … sloths were also used as head tofu of sorts. Let me explain.

Did you know that Jivaro youth honed their head shrinking skills by first practicing on sloths? Why sloths? The Jivaros believed it was the only animal capable of forming an avenging spirit. Seriously, how terrifying can an avenging sloth spirit be? I mean, have you ever look at a picture of a sloth? They are ALWAYS smiling!

Sloth Tsansas can be identified by their small rounded heads and very long coarse fur (10-14 inches).

Sloth heads were also used as a substitute for specific human heads if: 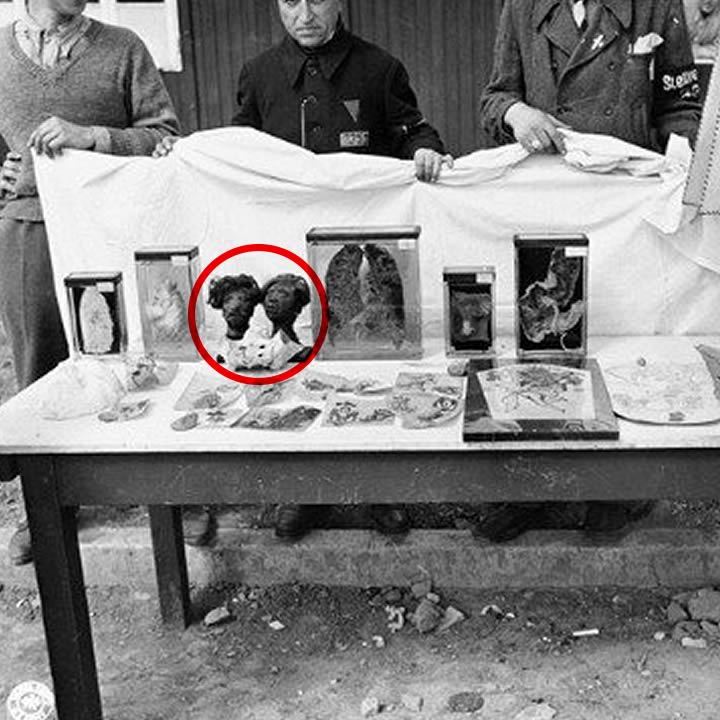 It is a well known fact that Nazis committed unspeakable atrocities on their captives during the Holocaust in World War II, including medical and inhuman experiments.

A lesser known fact is that recovered with other “medical artifacts” from the concentration camp at Buchenwald, Germany, were two human shrunken heads.

Documentation indicated that they were made from two Jewish Polish prisoners that tried to escape and were later executed.

One of the heads was later used as evidence of SS atrocities in the Nuremberg trials in 1945-46. We don’t have that head, but we have a crude replica of the one used in the trial. It was later discovered that, although authentic in nature, the shrunken heads were, in fact, not Jewish or Polish, but all the way from the Equatorial jungles of South America. Believe It or Not!

Next post Britain Designed a Nuke Filled With Chickens