As she embarks on her greatest adventure of all time, let's pull a few unbelievable facts out of the vault to learn more about the Olympian with a heart of gold, Simone Biles. 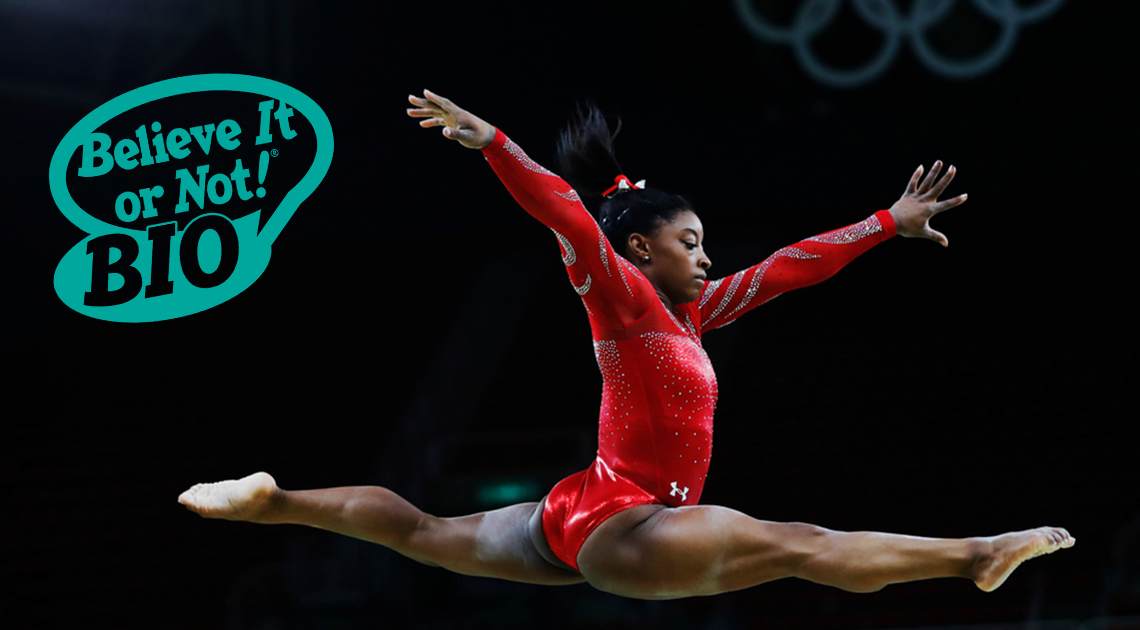 At just 24 years old, Simone Biles, aka The G.O.A.T. (Greatest of All Time) has dominated the world of gymnastics. Her recording-breaking achievements, countless medals, and numerous awards don’t even come close to describe the impact she has on the sport — or the world, for that matter.

Her journey to becoming the G.O.A.T. started shortly after she was adopted by her grandparents. At age six, in her hometown of  Spring, Texas, Simone went on a day-care field trip to Bannon’s Gymnastix, where she was quick to imitate and follow the lead of the other gymnasts. Capturing the attention of their coaches, a letter was sent home to request Simone’s presence at the gym’s tumbling and gymnastics classes. The rest is history — literally.

As she embarks on her greatest adventure of all time, let’s pull a few unbelievable facts out of the vault to learn more about the Olympian with a heart of gold, Simone Biles.

Simone Biles reigns “first” and has collected the “most” in many areas of U.S. Gymnastics.

And, as her nickname of the G.O.A.T. might suggest, while Simone is the “first” in many categories, she also claims the collective “most” in many others — the numbers speak for themselves!

Simone has a total of 25 World Championship medals — 19 of them being gold. Her achievements at the World Championship competitions have earned her the title of most medals ever earned by a U.S. gymnast, male or female, in addition to being the most-decorated female gymnast in history! 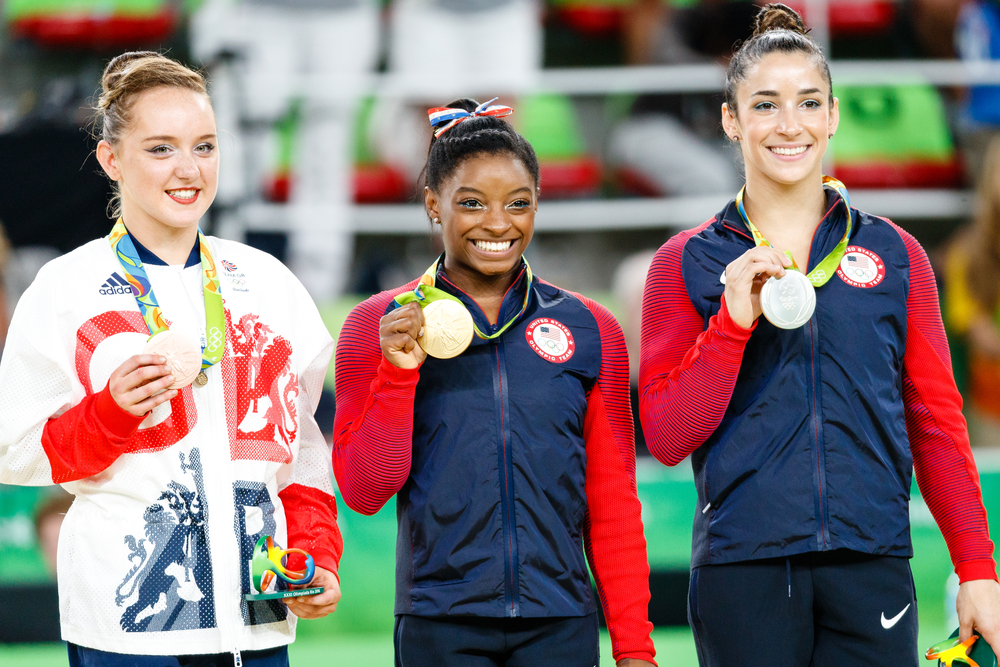 Simone Biles is only the fifth gymnast in history to claim four gold medals at a single Olympics.

Pending her performance at the Tokyo Olympics, Simone has a very good chance of claiming another record-breaking title. Should she earn three gold medals in Tokyo, Simone can tie the record for the most gold medals won by any gymnast, man or woman, in Olympic history. Currently, she has collected four gold and one bronze at her first Olympics in Rio, halfway to her goal of the tie-breaking seven. Currently, Shannon Miller, who competed at the 1992 and 1996 Olympics, holds the record for the most U.S. Olympic medals.

After every meet, Simone orders herself a pizza pie.

One who works as hard as Simone Biles on a daily basis deserves to be rewarded with more than just gold at the end of the day! After a competition, Simone’s guilty pleasure is ordering herself a pepperoni pizza with stuffed crust (excellent choice, if we do say so ourselves)! As she is often asked in television interviews, Simone opened up to ABC News about her “secrets to success” after the 2016 Rio Olympic Games. She replied with the simple answer: pizza. “It doesn’t even matter if I don’t win a self-gold. After every meet, I have pizza.”

Simone Biles is the first woman in history to land a Yurchenko double pike in a competition.

While competing at the 2021 U.S. Classic, Simone Biles took the internet by storm when she performed a Yurchenko double pike. Prior to this vault pass, the particularly difficult skill had historically only been performed by men. A Yurchenko double pike, named after former Soviet gymnast Natalia Yurchenko, is a roundoff onto the springboard, followed by a back handspring onto the vaulting table, ending with a piked double backflip into the air to landing. 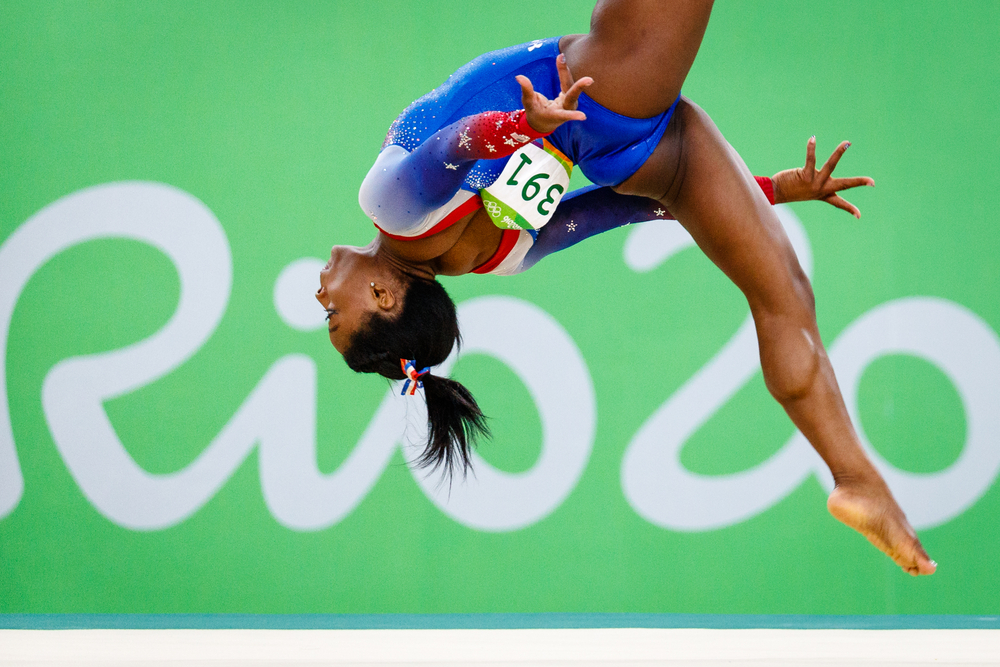 There are currently 4 elements in the Women’s Gymnastics Code of Points named after Simone Biles.

In order to claim the name of a signature move, like the Yurchenko double pike, it is in the written rules of FIG Women’s Artistic Gymnastics Code of Points that one must to perform the skill without falling at a World Championships, an Olympic Games, or a Youth Olympic Games.

Currently, Simone already has four “Biles” signature moves, that have officially been claimed and performed in a national competition. On the floor, she flies high with the Biles and the Biles 2. The Biles is a double back layout with a half twist, and the Biles 2 is a triple-double: two flips and three twists in a tucked position. The vaulting Biles is a round-off onto the springboard, connected to a half turn onto the horse, ending with two full twists. And on the beam, the Biles is a double-twisting double backflip.

Ms. Simone Biles is well on her way to a fifth eponymous skill — the Yurchenko double pike — pending her performance in the 2021 Tokyo Olympics.

Even watching her compete on television, it’s easy to see that Simone gets some serious height on every event. On the floor exercise, she’s able to execute tumbling passes at up to 10 feet in the air. At 4 feet 9 inches tall, Simone Biles was the shortest athlete to complete at the 2016 Rio de Janeiro Olympic Games.

And while her shorter stature is undeniable, Simone herself has said that one of her biggest pet peeves is when people point out the obvious — yes, she knows how short she is!

Simone Biles leotards are blinged out from head to goat!

She told Marie Claire, “The idea was to hit back at the haters. I didn’t feel like it was necessarily fair how they could keep saying whatever they wanted, but then if I said something, it wasn’t fair. [The haters] were joking like, “I swear, if she put a goat on her leo, blah, blah, blah.” That would make them so angry. And then I was like, “Oh, that’s actually a good idea. Let’s make the haters hate it, and the fans love it.” And so that’s exactly what we did and why we did it.

I just hope that kids growing up watching this don’t or aren’t ashamed of being good at whatever they do. And that’s my problem: when people kind of harp on other people that are good at something. And it’s like, everybody can say you’re good, but once you acknowledge it, it’s not cool anymore. And I want kids to learn that, yes, it’s okay to acknowledge that you’re good or even great at something.”

Simone’s partnership with GK Elite has allowed her to create a line of custom leotards for competitions. The first of her goat bling debuted at this year’s World Championship competition in Texas.

The only two things Simone Biles might love more than gymnastics are her French bulldogs.

Simone’s Instagram profile is a feed full of flips, selfies, and of course, her Olympic journey. Her bio boasts the three titles she’s certainly most proud to call herself–Olympic Gold Medalist, Pizza Connoisseur, and Dog Mom. Her pups, Rambo and Lilo, are the perfect companion to an Olympic champion, staying by Simone’s side for just about every big event.

Of course, they’re both currently dressed in their Team U.S.A.-best, ready to cheer on their fur mama at the Tokyo Olympics! If you’re looking to fill your feed with the G.O.A.T. and her faithful companions, follow along with them @thebilesfrenchies.