Forensic experts say they all exhibit signs of blunt trauma. 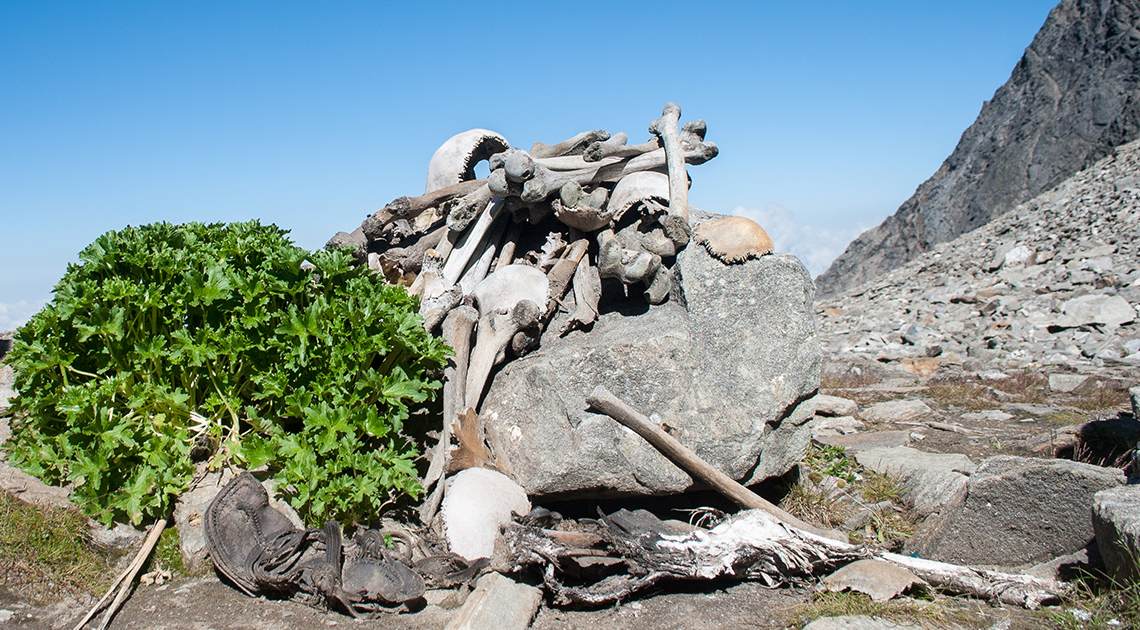 Deep in the snow-covered mountains of the Himalayas, the skeletal remains of hundreds of people populate a small lake in Roopkund, India, several miles from civilization. It took scientists decades to figure out how they died and why their bodies were deposited there so many years ago. Their findings were not what they expected. 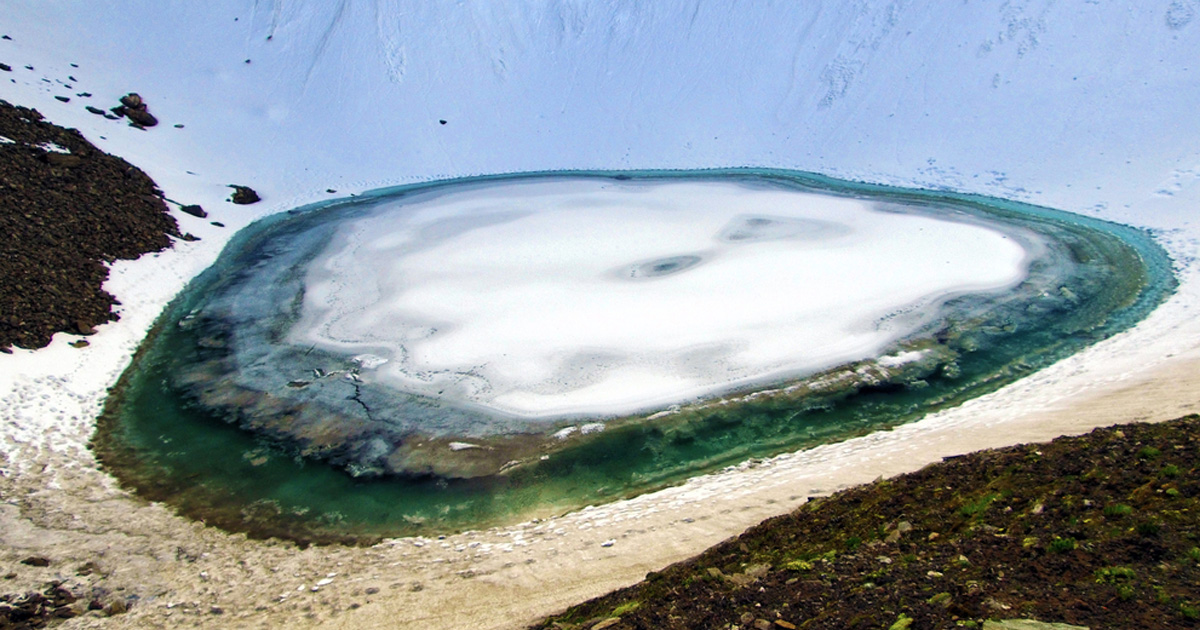 During World War II, a Nanda Devi game reserve ranger named Hari Kishan Madhwal entered a small valley and came upon the glacial lake, which is more than 16,000 feet above sea level (about half as high as Mount Everest). The ranger was startled to find several skeletons at the bottom of the lake. He was able to see them because the lake is very shallow at around two-meters deep. 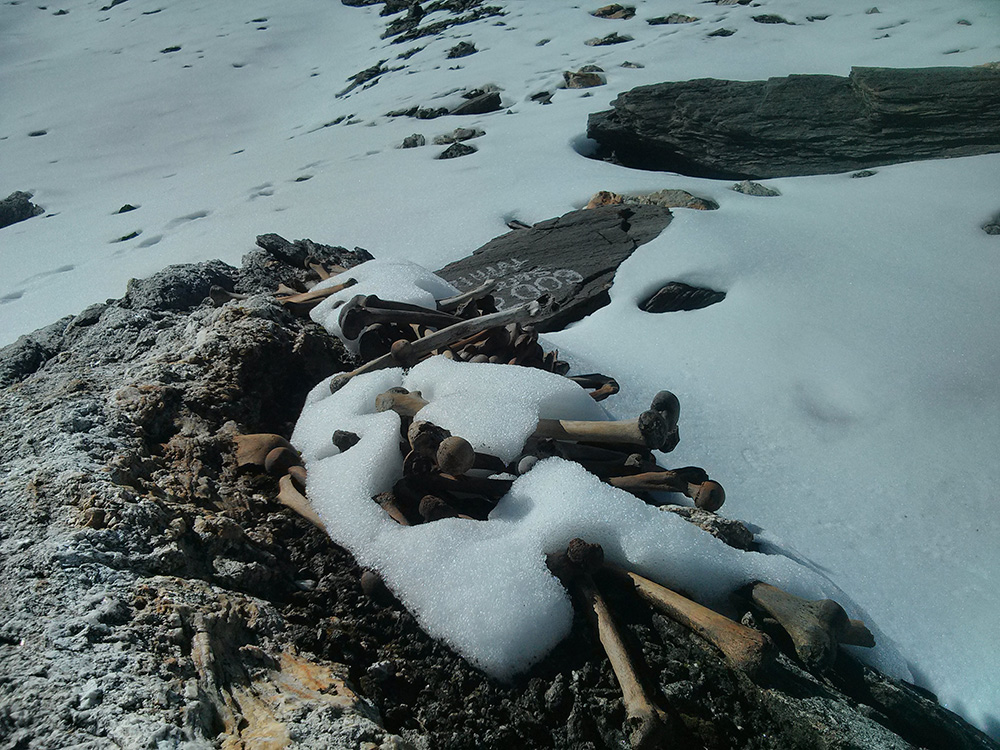 The high-altitude body of water is covered by ice 11 months out of the year. When the ice melts, additional remains surface in the water and on the shoreline, totaling around 200 skeletons.

Initially, the British believed the remains were of invading Japanese soldiers who died of exposure. Others thought the skeletons belonged to General Zorawar Singh of Kashmir and his soldiers, who disappeared in the Himalayas following the battle of Tibet in 1841.

The British government examined the skeletons and determined they were much too old to be Japanese soldiers even though some of the flesh, hair, nails, and bones were well preserved by the dry, cold Himalayan air. Upon further inspection, scientists found several artifacts near the bodies, including spearheads, leather slippers, and rings, disproving the theory that the skeletons were the remains of soldiers from the second world war. 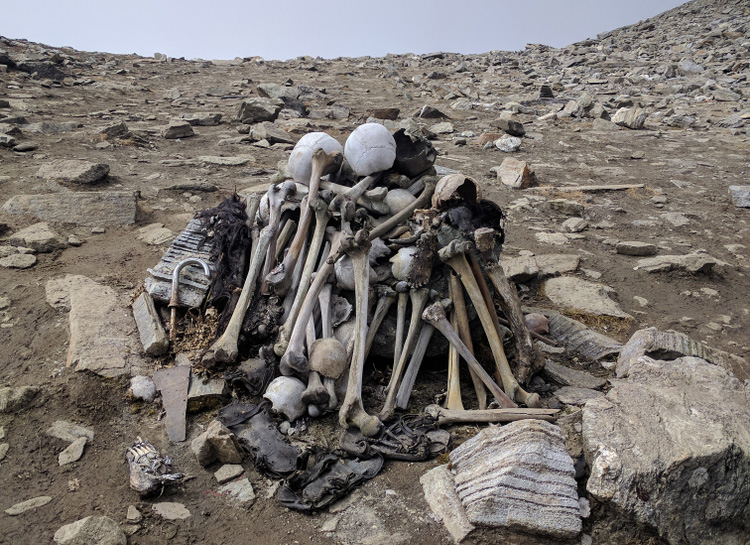 Over the years, the fate of the dead became less of a priority. Experts failed to pinpoint exactly where the bodies came from and what caused their deaths. They speculated that an avalanche, disease, starvation, ritual suicide, or even an enemy attack may have been the reason why so many people died in one place. One theory suggested the people were killed elsewhere, and their skeletons were displaced due to glacial shifts.

In 2004, a team of researchers from National Geographic, Oxford University’s Radiocarbon Accelerator Unit, and the Centre for Cellular and Molecular Biology in Hyderabad, India, were able to date the bodies to around 850 AD, a period of time when the country boasted the largest economy on earth.

Scientists determined that the skeletons belonged to two separate groups of people in the 9th century. One was a clan or family consisting of related individuals, while the other was a smaller and shorter stature group of people. It was later determined that 70 percent of the group came from Iran, while the smaller, local group was likely hired to guide the first party and carry their belongings on a pilgrimage through the area. 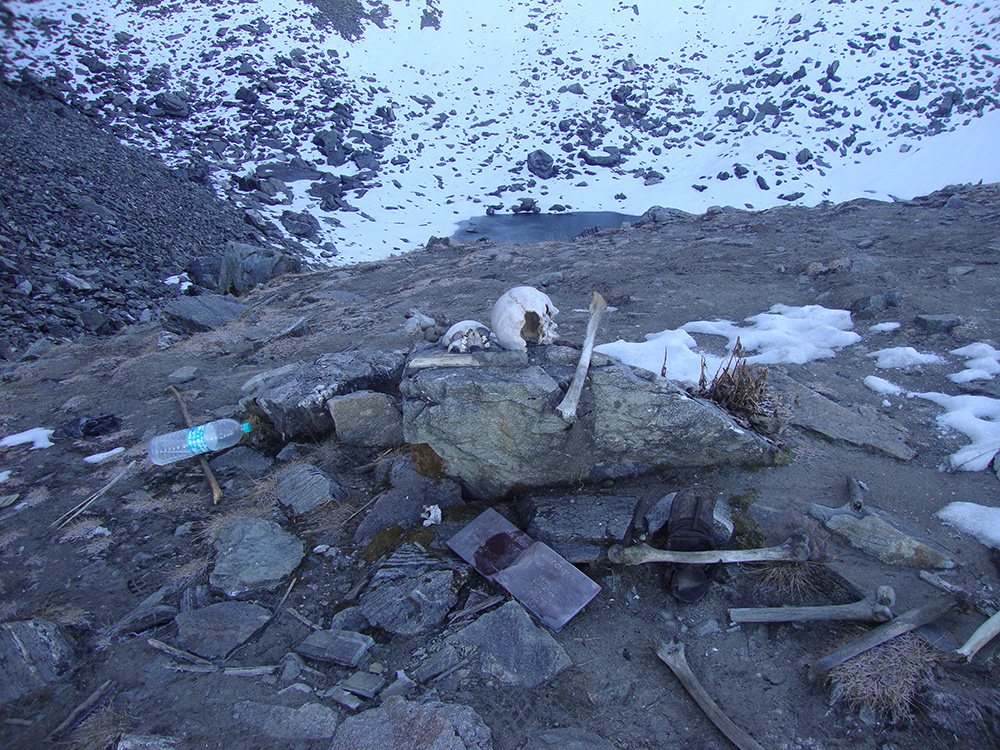 Experts determined that every single person was struck by a fatal blow to the head, which left tiny, deep cracks in their skulls. There were also strikes on their necks and shoulders. The manner of the injuries suggested that something round caused their deaths. Since other parts of the bodies were unharmed, investigators concluded that the blows came from above.

Local legend has it that the king of Kanauj and his pregnant wife were traveling with an entourage to Nanda Devi shrine for a special ceremony when they got caught in a terrible hailstorm. They had nowhere to seek shelter, and they died near Roopkund. A traditional folk song describes a similar scenario in which a goddess became so angry at outsiders who entered her inner sanctum that she exacted revenge by casting large hailstones upon them.

While it’s unclear if the folklore was based on actual events, scientists now believe that a freak hailstorm with stones approximately nine-inches in circumference (similar in size to a cricket ball) were responsible for the deaths at Skeleton Lake more than 1,200 years ago. With nowhere to take cover, the people perished from blunt trauma.

It isn’t the only time hailstorms have wreaked havoc on humans. On April 30, 1888, as many as 246 people were killed with hailstones the size of “goose eggs and oranges” in Moradabad, India. In 1932, there were reports of 200 people dying, and thousands more being injured, by a hailstorm in Nanking, China.

Meanwhile, Skeleton Lake has turned Roopkund into a tourist destination, attracting hundreds of visitors, trekkers, and pilgrims each year who make the steep five-day climb to reach the body of water. There have been some efforts to conserve the area and turn it into an eco-tourism destination that protects the skeletons from souvenir-seeking travelers who sometimes steal bones as mementos.

Next post One Cruel And Sinister Way To Catch A Witch

Previous post Living With The Dead In The Manila North Cemetery