There have been many versions of skijoring, or "ski driving," over the years, including horse, dog, reindeer, and even motorcycle! 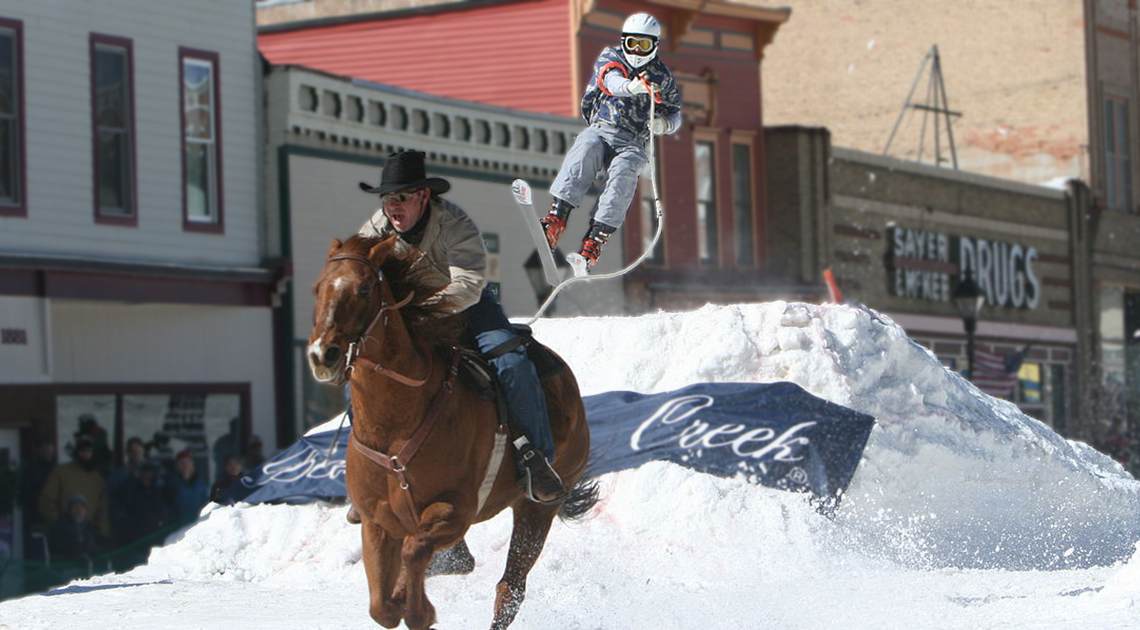 When winter rolls around, covering the ski slopes with loads of fresh powder, it’s hard to beat the thrill of racing downhill on your favorite skis or snowboard. But if you’re a fan of something a little more rugged and wild, why not give skijoring a try? This animal-powered sport packs a high-speed, cutting-edge snow punch, and yet it’s also steeped in thousands of years of history, sure to make you feel like you’re a part of something extraordinary and ancient. That said, it requires talent, fearlessness, and fantastic balance on skis.

Here’s what you need to know about skijoring and where to enjoy it this year.

Skijoring in Its Many Forms

Harnessing animal power during the winter months has a storied and ancient history. Thousands of years ago, a Persian historian reported seeing people pulled on skis or wooden boards by animals in the Altai Mountains of Central Asia, where Kazakhstan, Mongolia, China, and Russia intersect. But Central Asia wasn’t the only spot where this winter craze caught on.

In Scandinavia, Laplanders have relied on sleds drawn by reindeer to get around for centuries. They used these herd animals to navigate vast expanses of snow in an activity known as skijoring or “ski driving.” (Those still leading a traditional Laplander lifestyle rely on reindeer to get around to this day.) Soon, skijoring spread from the Scandinavian countries to France and Switzerland, and horses replaced reindeer. By the mid-20th century, some were even experimenting with motorcycle and automobile-powered skijoring.

By the early 20th century, skijoring also made its way stateside, first appearing as a recreational activity along the Eastern Seaboard in places like Lake Placid, New York, and Hanover, New Hampshire. By the 1930s, the ski fever spread out west with people partaking in the sport in mountain towns like Steamboat Springs, Colorado, and Jackson Hole, Wyoming.

After World War II, the sport got a boost when 10th Mountain Division members decided to give it a whirl. Known affectionately as “our soldiers on skis,” these American troops endured year-round mountain warfare and all of its trappings, including skiing. They could live and fight in the harshest conditions and had proved their salt on the brutally cold battlefields of Europe. So, it only proved fitting that they’d embrace their winter sporting capabilities after returning home.

Because ski lifts and resorts remained very primitive in those days, the soldiers got lifts from local cowboys. How? They attached long ropes to the cowboys’ saddle horns and then held on tight. Each cowboy rode at top speeds down a long snow-covered roadway or open field. These unlikely players invented the American version of equine skijoring in the process.

Today, equine skijoring remains a highly competitive and specialized sport. In as little as three strides, the horses can reach speeds of 40 miles per hour as they cover a track measuring 900 feet long. Behind the horses, skiers hang onto 30-foot-long ropes, reaching speeds of 60 miles per hour around turns. As they fly along at those impressive speeds, they must complete a series of gates, capture rings, and jumps.

There’s also a canine version, during which the skier helps propel themselves along with their poles. Unlike the horse-based version, canine skijoring racecourses are mainly trail-based. Believe It or Not!, dogs weighing as little as 35 pounds can participate in skijoring, as long as they are properly trained.

Competitions occur across the wintry northern climes in areas like Poland, Latvia, Norway, Sweden, Finland, Switzerland, and more. You’ll also find competitions in eight American states and parts of Canada. Although skijoring made its one and only Olympic appearance at the turn of the century, the sport had fallen into disfavor by the 1970s. But a new generation of competitors hopes to bring it back in some capacity at the 2026 Olympics, which will be held in the Italian cities of Milan and Cortina d’Ampezzo.

In the meantime, you can find skijoring as well as other strange sports and curious competitions in the latest Ripley’s Believe It or Not! book, Out of the Box — on sale now!