Set Of Skull Drill-Saws For Trepanation

Could a hole in your head really relieve a headache?

Trepanation is the practice of drilling, cutting, boring, chiseling, or scraping into the human skull. It’s a practice that dates back to the earliest humans, with examples found from 10,000 BC. Despite being widespread and culturally common, however, historians are not always sure why people did it.

For a long time, modern man has thought this was a rudimentary surgical practice, used to relieve migraines or treat neurological disorders. Anthropologist Paul Broca made strides in the 1800s to understand how the different parts of the brain functioned. He would eventually go on to perform brain surgery based on the beginnings of modern neuroscience, but he was inspired by something that was far older. In 1867, he was shown a Peruvian skull which showed clear evidence it had been cut into. Trepanned skulls have been discovered before in areas across the world, but the example brought to Broca was cut in the shape of a rectangle. Prior to this, many had written off trepany skulls as having been struck by a weapon—not purposefully carried out while a person was alive.

Paired with his knowledge that brain surgery could be successfully carried out to help patients, Broca theorized that the trepanation had been used to great effect in ancient times. He explained that people sought to let the “evil spirits” out hurting their heads and that many even survived the procedures. His ideas, unfortunately, bled their way into the brains of his contemporary medical professionals. 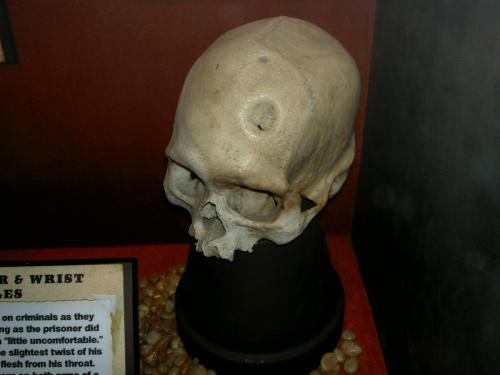 This skull from Peru shows evidence of trepanation. (On display at the San Francisco Odditorium)

These misguided ideas would be interpreted into real-life practice in the early 1900s, with budding neurosurgeons deciding the could treat behavior with surgery. Trepanation burgeoned in practice alongside lobotomies—becoming a catch-all solution for any number of problems. Many juvenile delinquents for example, were referred to doctors for brain pressure relief in the 1920s, a procedure that carried a mortality rate of 42%.

Next post The Mad Minds Behind Hellthy Junk Food

Previous post Koala Fingerprints Are Almost Indistinguishable From A Human's