Huberta began what would become a two-and-a-half-year journey of over 1,000 miles. Her trip became so popular that sightings of her made headlines around the world. 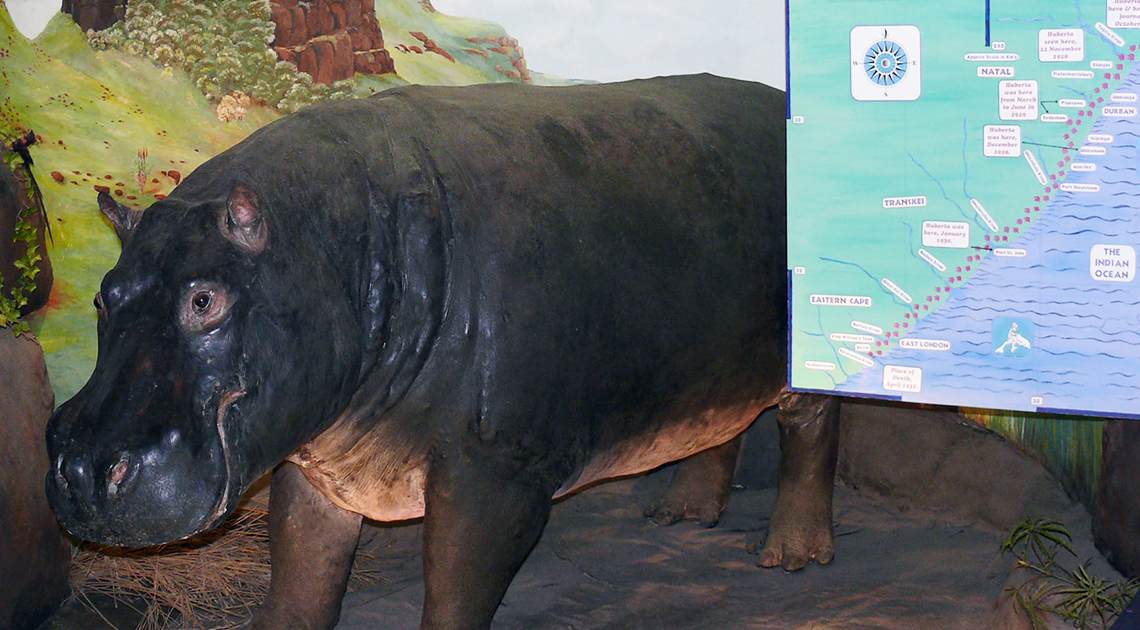 During the Great Depression, a hippopotamus in South Africa decided she wanted to see more than her microcosmic watering hole. She began what would become a two-and-a-half-year journey of over 1,000 miles. Her trip became so popular that sightings of her made headlines around the world.

Huberta – initially named Billy, followed by Hubert before her sex was determined – wound up having many adventures during her trek, making her an unexpected, international celebrity and South Africa’s “national pet.” She successfully avoided capture while traipsing through golf courses, gardens, and other areas of the countryside. Since hippopotamuses typically roam after dark, she had the ability to travel in stealth. While the press and her fans tried to catch her in action, they often only saw the footprints she left behind, according to Mahlatini Luxury Travel.

It’s unclear what motivated Huberta the hippo to leave her home at the St. Lucia Estuary in KwaZulu-Natal in 1928, but according to South African website Getaway, people believed that she was either looking for a male companion or she ran off after her mother died at their watering hole. Another more romantic theory was that she was seeking the home of her ancestors.

S0me information regarding her journey is a bit vague as she so skillfully avoided humans. Still, the South African-based Natal Mercury newspaper got its hands on a photo early on during her adventure, and its publication sparked intense interest from people around the world. It was a positive news story to follow during the late 1920s, which was a challenging time economically for many people all over the world.

At one point, Huberta spent time hanging out in a lagoon at the Mhlanga River, which was about 125 miles from her home base. Some locals treated her as royalty, dishing out snacks to feed her traveling soul, while others were not so kind to Huberta. In true paparazzi fashion, they threw stones and sticks near her lodging to coax her out of hiding places, all for a look at the famous hippo. Hunters even tried to capture and relocate her to the Johannesburg Zoo, but they didn’t succeed.

Huberta was greatly admired by many people. The Zulus believed she embodied the spirit of the Great King Shaka, according to Wild Coast Holidays, while the Mpondo reportedly believed she was a reincarnation of a famous doctor. Some Hindus considered her a “protector of the poor,” while some Xhosa believed Huberta was the spirit of a great chief. Due to her celebrity status, the Natal Provincial Council, a governing group in South Africa, eventually categorized her as “royal game,” prohibiting hunters from catching or killing her.

Over the course of her travels, people witnessed her swimming on the coast of Durban and even exploring the city’s main street. She also surprised guests at the Beachwood Golf Course, the Durban Country Club, and she even startled a train conductor by lazily hanging out on the tracks.

By March 1931, Huberta had traversed approximately 122 rivers and settled in the Eastern Cape in the Keiskamma River. Unfortunately, her life came to a tragic end when she was killed by a group of hunters. Though they claimed they didn’t know who she was, they were fined for their actions, and people around the world were devastated by Huberta’s death. South Africans mourned her passing by writing sympathy cards and making donations in her name. Some even wrote poetry in her honor.

A London taxidermist preserved her body, and her final resting place is a museum in South Africa where thousands of people gathered to pay tribute to her. You can still see Huberta today in the Amathole Museum in King William’s Town.