The rocket's exhaust combined with lighting from the early morning launch to create a stunning visual. 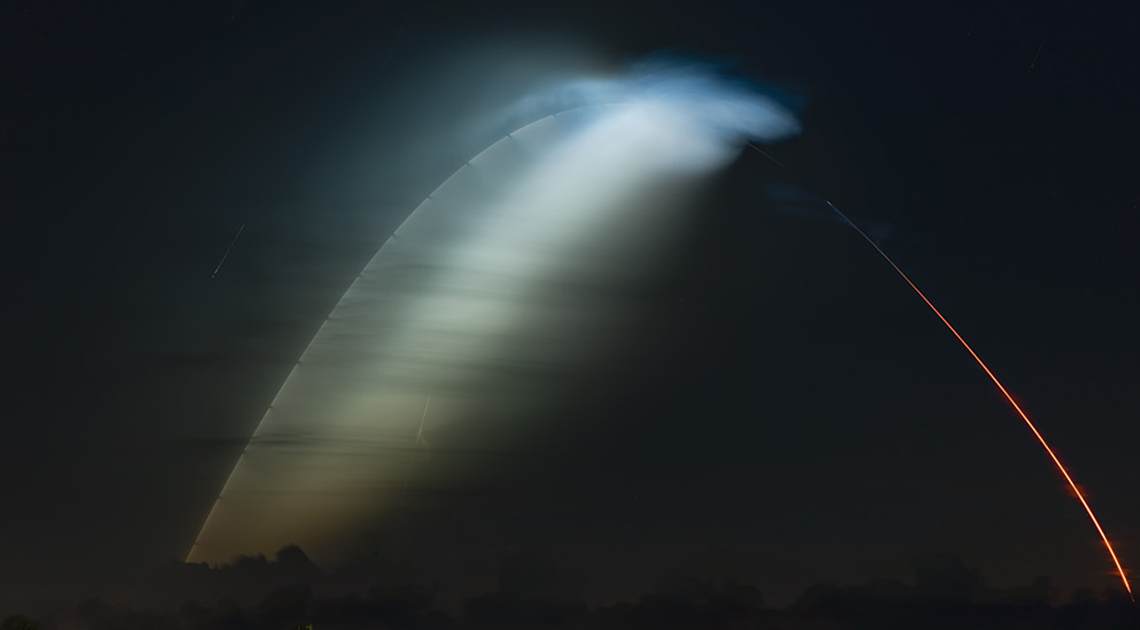 Early morning stargazers from Florida all the way up to Georgia and beyond were treated to a magnificent display as a rocket launch sent what’s known as a “space jellyfish” swimming through the skies.

At 5:42 a.m. EDT on May 6, SpaceX launched 53 Starlink satellites into orbit on its Falcon 9 rocket, splattering a jellyfish-shaped luminous blob in its trail, delighting those who braved the early wake-up call to witness the event.

A Jellyfish Out of Water

While the Florida coast is certainly known for jellies, they’re usually of the brainless and boneless variety, most commonly found floating through the shallow waters, ready to sting at the mere threat of being touched.

A long way away from its seabound namesake, the space jellyfish was formed purely by science, with its long, bulbous shape resulting from the exhaust of the Falcon 9’s rocket engine nozzle. Due to the pressure difference between the gas in the rocket nozzle and the atmosphere’s ambient air, the gas lowered its own pressure to match its surroundings by expanding upon release.

As Chris Combs, an aerodynamics and mechanical engineering professor at the University of Texas at San Antonio, put it, “In under-expanded exhaust you get expansion fans at the nozzle exit to decrease pressure and match background: jellyfish, at high altitude.”

The Time Was Right

While that explains the shape, the mesmerizing glow of the space jellyfish was simply a matter of perfect timing.

According to Combs, the early morning launch allowed just enough sun to peek over the horizon to illuminate the exhaust’s expansion when it entered a high altitude, causing it to glow against the still-dark-from-the-ground-level sky.

This optical illusion was spotted hundreds of miles away, with witnesses’ images and videos varying by location. While some viewers weren’t ready for that space jelly, others captured a simple silver streak flashing across the sky or, from another angle, what looked like more of a billowing cloud.

Sending Jellies to Space Since 1991

The separation between sea and space can seem pretty vast, but the more we get to know about our deep-sea neighbors, space often seems like it may as well be right here on Earth, and jellyfish are no exception!

While a well-lit jellyfish is about as alien-looking as a creature can be, did you know that NASA actually sent these intergalactic invertebrates to space?

Back in 1991, NASA scientists decided to study how jellyfish would react to the lack of gravity in space and, ultimately, how they’d behave once they returned to their home planet. This curiosity resulted in the first Spacelab Life Sciences Mission, during which launched 2,478 moon jelly polyps aboard the space shuttle Columbia.

Though the jellyfish that developed in space weren’t far off in physical appearance from their Earthly counterparts, their motor skills didn’t fare so well, showing irregular movement and pulsing as if they had collectively developed vertigo!

By the end of the experiment, over 60,000 jellyfish were orbiting the planet, but little did they know (because of the lack of brains, of course), they weren’t alone.

Though real jellyfish in space and the SpaceX jelly are impressive, somewhere out there, about 300 million light-years away in the Abell 2877 galaxy cluster, floats a space jelly explosion of epic proportions.

In March 2021, a paper published in the Astrophysical Journal revealed the discovery of a “cosmic jelly” more than 1 million light-years wide!

The super space jelly — or “radio phoenix” — results from a massive eruption of a series of black holes, and “holds a world record of sorts,” according to lead study author Torrance Hodgson of Perth, Australia’s International Centre for Radio Astronomy Research.

Spotted through a radio telecope, the jelly is only visible in a narrow band of radio light, appearing bright at FM radio frequencies but essentially disappearing at 200 megahertz.

“No other extragalactic emission like this has been observed to disappear anywhere near so rapidly,” said Hodgson.