These beautiful bird-built structures are a hoot! 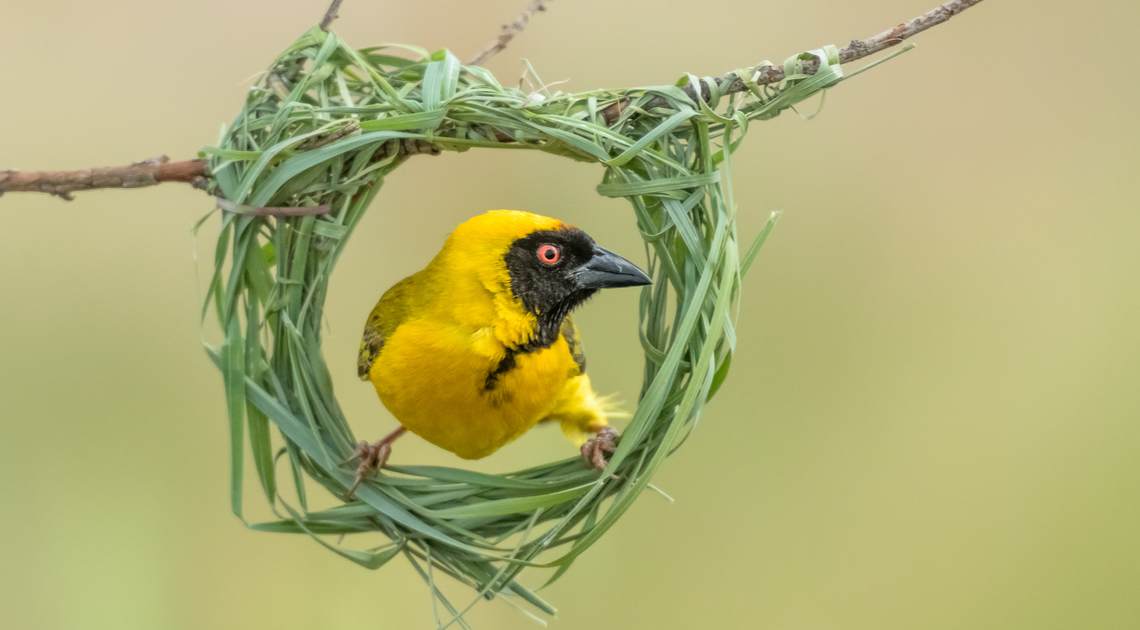 A southern masked weaver standing in the beginning stages of the species‘ iconic orb-shaped nests.

Now that spring has finally sprung, you’ve probably heard baby birds peeping from nests in trees, under balconies, or even flower boxes. But not all birds build round structures from sticks and straw.

Some birds go the extra mile to create wonderfully weird constructions from sand, spiderwebs, and even spit! Here are some of our favorite nifty nests built by avian architects.

The tailorbird is a small, unassuming songbird that probably wouldn’t astound you at first glance. However, beneath their green and gray plumage hides a skilled stitcher.

Tailorbirds actually “sew” leaves together to make their nests. Of course, all the grunt work is left to the female. She’ll collect strong, supple leaves that will provide a solid foundation for her home. The female tailorbird ensures the leaf is the right fit by wrapping it around herself. After finding the perfect leaf, she will use her beak to make a series of tiny holes along its edge. Afterward, she’ll carefully thread plant fibers through the holes, connecting additional leaves together until her nest is complete. She’ll even build a roof so her babies stay dry all season long.

2. A Structure Made from Spit

What’s the strangest thing you’ve ever eaten? Probably not an edible nest made from bird saliva.

Called bird’s nest soup, the dish is a delicacy in southwest Asia. The nest is made by a swiftlet, who uses its own hardened saliva to build its home by depositing layers of its spit on rocks deep in caves.

In areas where bird’s nest soup is popular, folks have created multi-storied house for these birds to nest in so as to easily obtain their spit. In fact, the estimated 30,000 swiftlet houses in Malaysia make up $400 million of the national economy.

While most birds prefer to build their nests alone, others take a much more collaborative approach. The sociable weaver — emphasis on the “sociable” here — will join forces with its flock to build an entire apartment complex for its young. The biggest communal nest of any other bird species, these immense structures house over one hundred breeding pairs and can be used for generations. 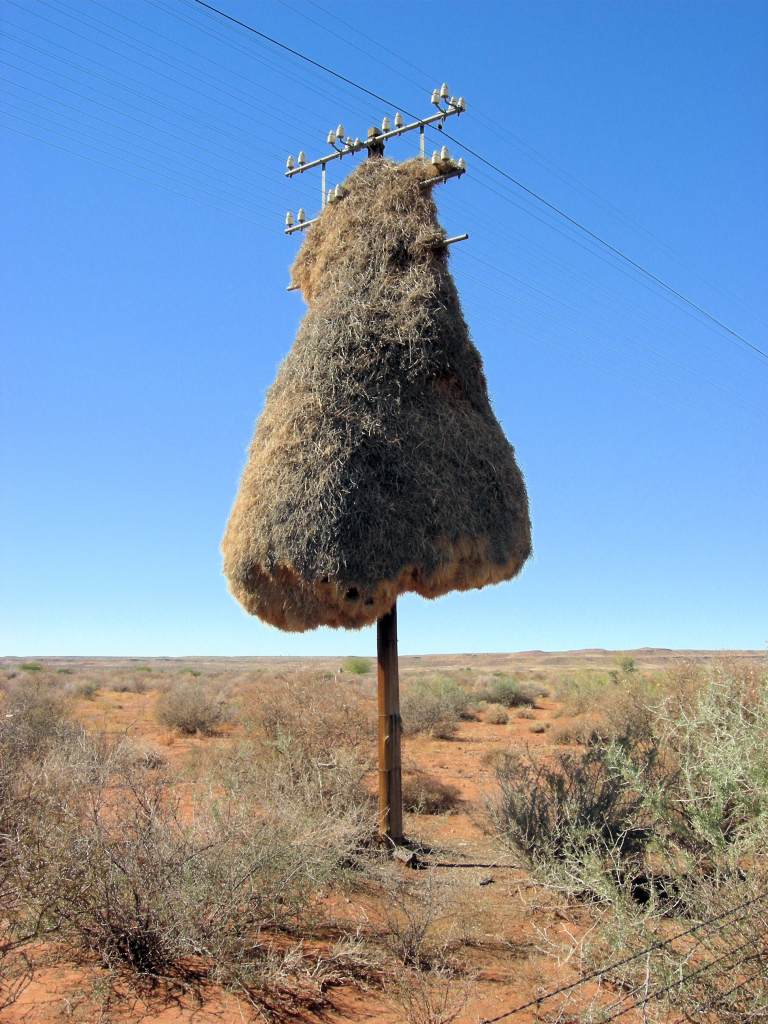 Unlike most birds that build their nests above the ground, the maleo birds of Sulawesi, Indonesia, assemble their nests under the sand. They aren’t the only bird to do this; megapodes are a family of about 20 ground-dwelling birds who bury their eggs in mounds. 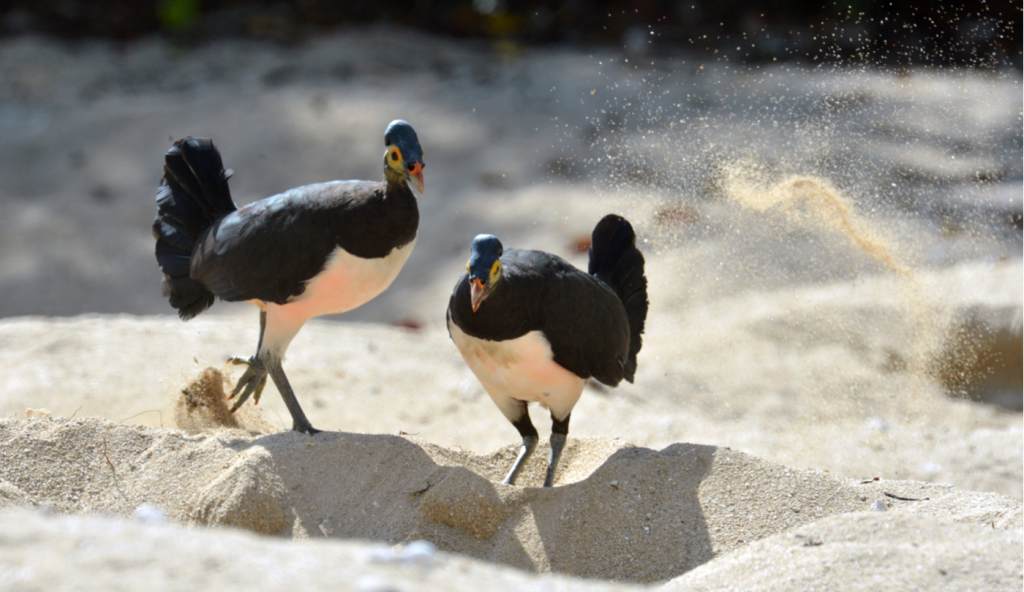 However, while most megapodes will incubate their unhatched chicks by surrounding them with decomposing organic material, the maleo instead relies on their home island’s natural thermal vents to keep their eggs warm. After digging huge a huge hole in the sand, the female lays her eggs and the breeding pair covers the hole with sand. Unfortunately for the chick, right after hatching they have to dig their way to the outside world! That sounds exhausting.

We all know that flamingos are pink birds that can perch on one leg. But did you know they make their nests out of mud? The male and female flamingos work together to build a nest that resembles a small volcano and reaches about 12 inches tall. This towering height helps keep the pink parents’ single egg safe from flooding and hot temperatures. 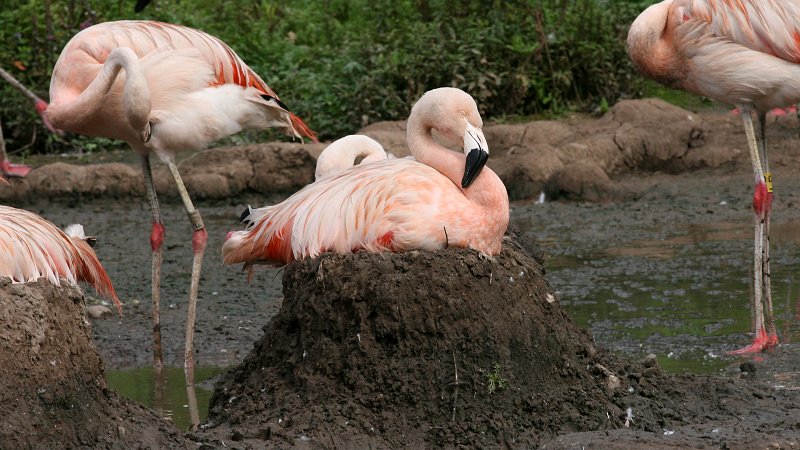 Some small birds, such as hummingbirds and kinglets, will hold their tiny nests together using spiderwebs! The arachnids’ silk is lightweight, incredibly durable, and super sticky, making it the perfect glue for avian architecture. 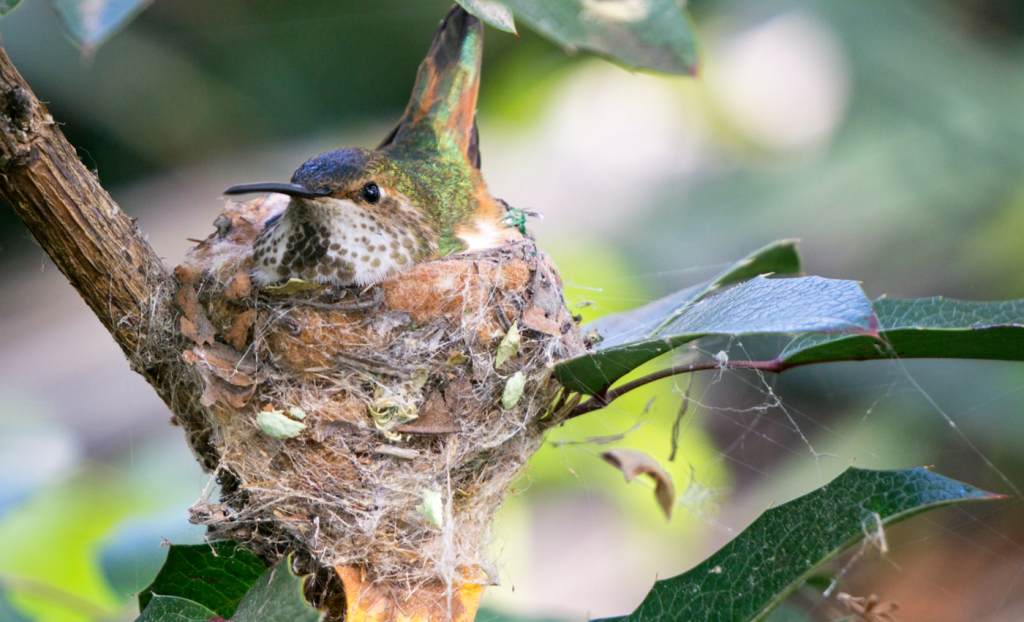 One other benefit to using spiderwebs? It’s stretchy! These itty bitty birds may hatch from eggs the size of a jelly bean or smaller, but they quickly grow and that elastic spider silk ensures their nest will grow with them!

While the tailorbird and the maleo can feel proud of their nesting accomplishments, we can’t say the same thing about pigeons. For some of these “rats with wings,” it’s perfectly acceptable to just throw a few twigs on the ground and call it a day.

Whenever I mess up an experiment I just think of what a pigeon considers a successful nest pic.twitter.com/dgUNQeDINK

While not all pigeon nests are as laughably lazy as the one above, let’s just be glad these birds don’t build homes for humans.

Previous post Canada Takes A Bite Out Of Moon Crime