The Straw Hat Riot Of 1922: The Harsh Version Of No White After Labor Day

Teen boys roamed the streets with large sticks, some with nails protruding on the ends to help hook the straw hats off people’s heads. 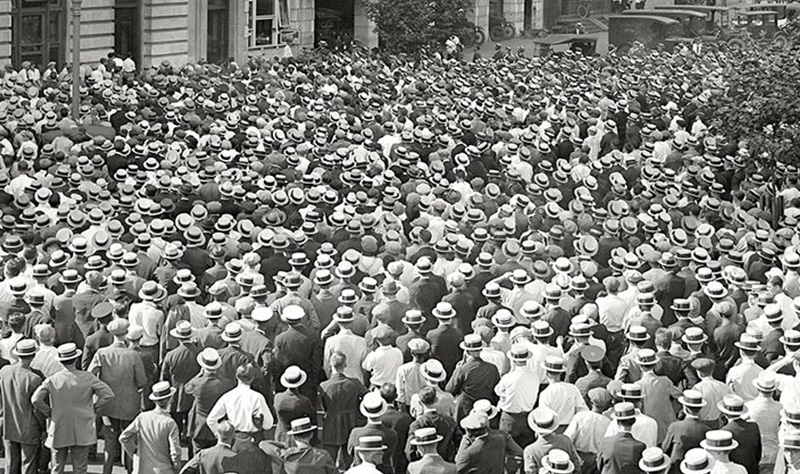 Men in the early 20th century who wore straw hats after September 15 were commonly ridiculed. Their hats were snatched off their heads and crushed. During one fateful year, men in straw hats were physically assaulted by mobs of teenage hoodlums in New York City.

Men commonly wore hats in the Roaring Twenties, but societal norms strictly prevented them from donning the straw variety after September 15. No one’s exactly sure why that was the cut-off date, particularly since summer doesn’t officially end until September 21. 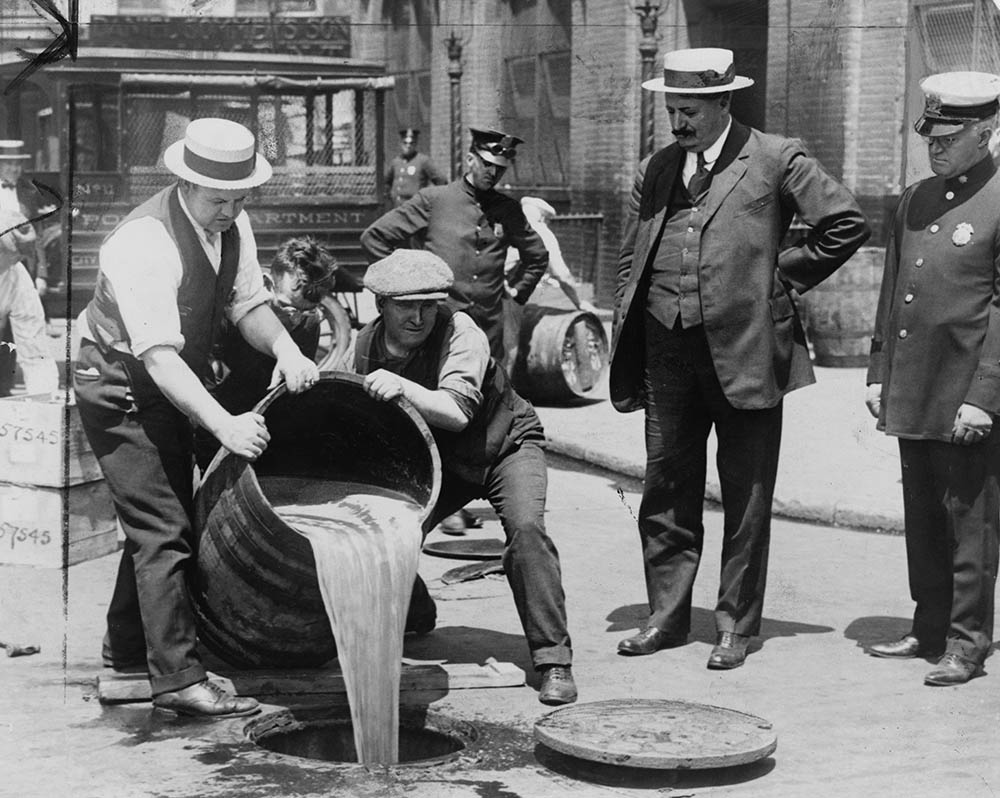 Straw hats became popular in the 19th century. Instead of wearing felt or silk hats in the summer, men donned straw hats, also known as boaters, to sporting events in the country. Eventually, the summer head-wear was deemed acceptable for city dwellers as well, and even professionals wore them to work.

Men who continued wearing straw hats after September 15 were mocked for their fashion faux pas. It was so common for a young passerby to forcibly remove a hat from someone’s head and crush it with his foot that newspapers cautioned people when September 15 was approaching.

An article from the Pittsburgh Press dated September 15, 1910, noted that police had to intervene on more than one occasion to “protect straw-lidded pedestrians.” The article explained that it was socially acceptable for stockbrokers to destroy each other’s hats because they are among friends. However, it was not right for a stranger to do so.

“If the informality should become general there will sure to be a number of obstinate gentlemen (most likely with English blood in their veins) who will coolly proceed to treat the fun-making as a physical assault and defend themselves in a manner which will spoil the fun for all concerned,” the Press added.

Their assumption proved true. Twelve years later, the unwritten rule was still in effect, and a full-blown riot took place in The Big Apple. It started on September 13, 1922, two days before the straw-hat ban was supposed to take effect. Young men got a jump start on the tradition by grabbing and stomping on the hats of factory workers in the former Mulberry Bend section of Manhattan. When the gang tried to pull the same stunt on a bunch of dock workers, the men retaliated and a brawl ensued. It was so bad, traffic stopped on the Manhattan Bridge. Police were forced to break up the riot and arrested several people.

The fighting continued the following night. Teen boys roamed the streets with large sticks, some with nails protruding on the ends to help hook the straw hats off people’s heads. Anyone who resisted was beaten, and several men had to be treated for their injuries. Many of the boys were under age 15 so they were not arrested. Their punishment? A good spanking. 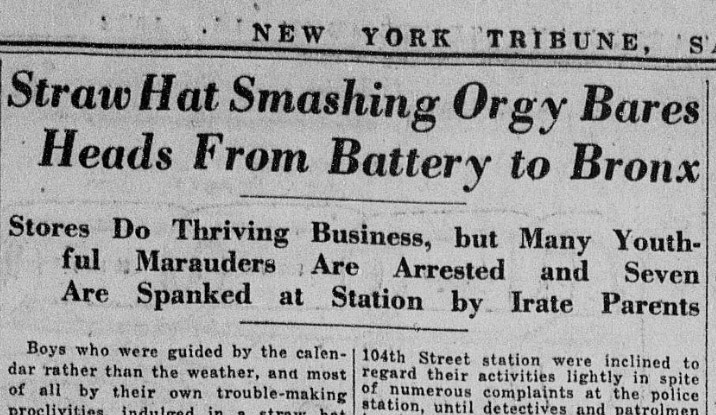 The New York Times reported that hundreds of boys terrorized straw-lidded citizens, forcing them to run through a gauntlet. Other hoodlums hid in doorways before leaping out to attack. A man named E.C. Jones claimed 1,000 teens were part of a roaming mob on Amsterdam Avenue. Harry Gerber, 25, was kicked and beaten so badly that he was hospitalized.

Even police officers, who were greatly outnumbered, were targeted. A group of boys threw Acting Detective Sergeant Brindizi’s hat in the street, and he fell into a gutter while pursuing his tormentors. Authorities would break up a gang in one district only for it to reform in another area.

Interestingly, the riot was a boon for hat stores, which stayed open late to provide soft head-wear for those who feared being attacked.

Although no one died in the Straw Hat Riot of 1922, the hat-snatching tradition continued for a couple more years, and one man was reportedly killed in 1924. In 1925, the Times published the article, “Discard Date for Straw Hats Ignored by President Coolidge,” which effectively ended the practice. 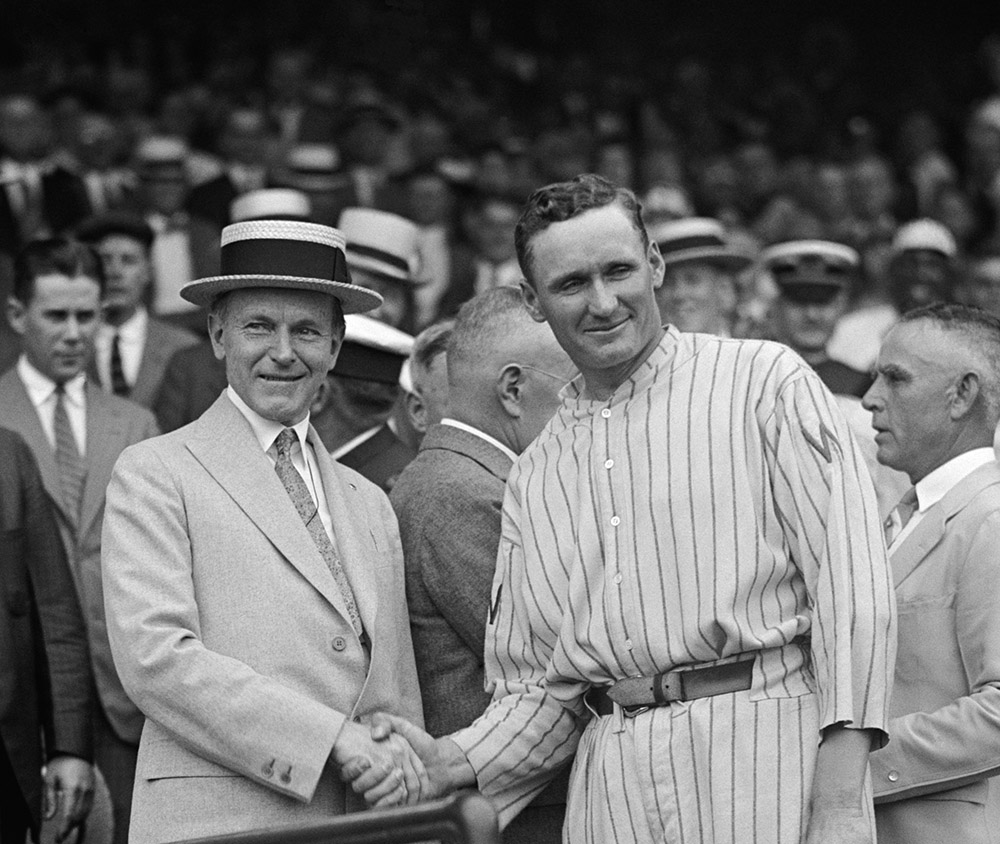 After the U.S. leader rejected the ritual, straw hat smashing eventually died out. Plus, alternatives such as the Panama hat became more fashionable, and straw hats eventually went out of fashion. Today, the closest fashion faux pas is wearing white after Labor Day, but that tradition is also considered an outdated rule.

By Noelle Talmon, contributor for Ripleys.com.

Previous post The True Sideshow Origins Of Freaks And Geeks