Not your typical Super Bowl discussion. 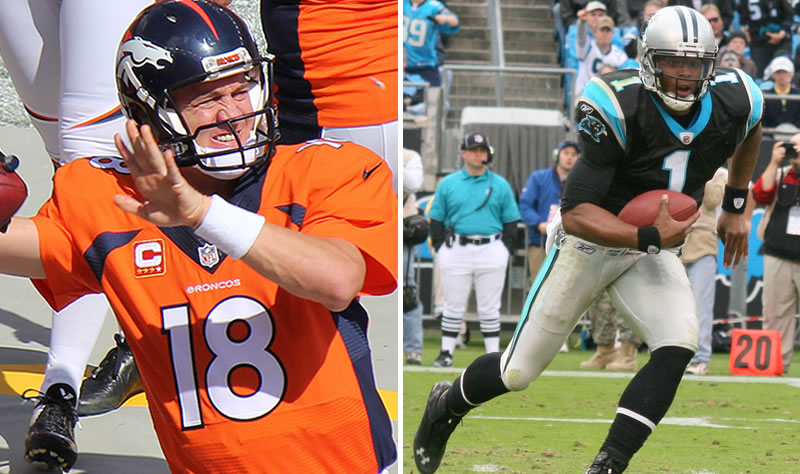 It’s that time of year again. Super Bowl fever is sweeping the nation. People are betting untold sums of money, employees are drawing battle lines in offices between Broncos and Panthers fans, and the country is gearing up to consume more buffalo wings and pizza than any other day of the year. No one is safe from Super Bowl hype or speculation, and Ripley’s is no exception.

The Super Bowl is always full of fun facts and figures. This year’s big game will see the highest cost per commercial ever. A 30-second ad airing between timeouts will cost a company $5 million. The same ad would have cost $42,500 during the first Super Bowl in 1967, an increase of 11664%!

Everyone is focusing on the facts and figures surrounding the big day, but here at Ripley’s, we’re curious about the odd stories surrounding these two teams’ namesakes that could affect the outcome of the game. 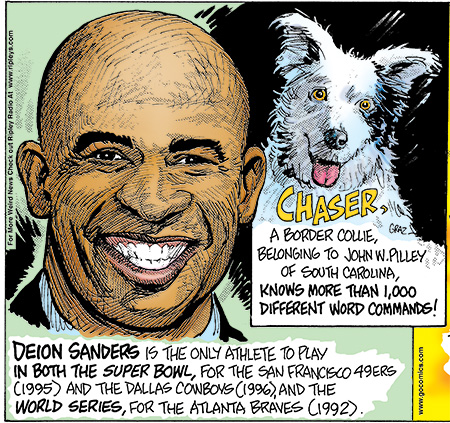 Deion Sanders got the job done

Ripley’s Tips for a Panthers’ Victory:

The first thing the Panthers need to take home the Super Bowl trophy is versatility. They’ll have to get the job done in every phase of the game that they can.

For inspiration, the Panther’s should look no further than one of the most versatile athletes in history: Deion Sanders. Deion Sanders is the only athlete to play in both the Super Bowl AND the World Series.

Brad Johnson could throw and catch

The Panthers might also think about taking a page out of Brad Johnson’s book. If Cam Newton can figure out a way to throw the ball to himself, they’ll be sure to get a win.

Brad Johnson is the only person in the history of the league to throw a touchdown pass to himself!

Ripley’s Tips for a Broncos’ Victory:

Like their namesake, the Panthers are a vicious team. They get off to a fast start and don’t back down until they’ve tackled their prey. If the Broncos want to take home the Lombardi Trophy, they may want to take tips from the monks. 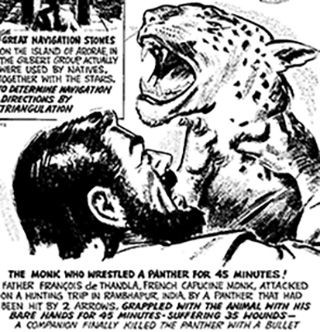 Father Francois de Thandla teaches the Broncos that they’ll need the endurance to hang in the game. The Panthers might put up a fight for longer than 45 minutes, but if the Broncos can draw on the monk’s strength, they can prevail. And in the end, they can always rely on the other lesson from this story: The importance of teamwork. After battling with the Panthers’ defense for an hour, the Broncos will need their defense to step up and deliver the kill shot.

No one’s half as good as Manning

But the most important factor in the Broncos’ winning the Lombardi Trophy is for Peyton Manning to be as good as he can be. If he can find a way to get even half as many touchdowns as he has in his career, the Bronco’s are sure to win. Only 12 other Quarterbacks have thrown half as many passes as Peyton Manning.

The site for the Super Bowl is chosen months in advance so that the game takes place on neutral ground. Unlike in the regular season, neither team has a home field advantage. But things like fans and fan noise often play a part in determining who wins. Heading into Sunday, both teams should strive to get a cheering section as large as the one the Redskins claimed to have.

They reported 7.8 billion unique visitors followed their 2014 training camp coverage, which is odd considering that is half a billion more people than there are on Earth! 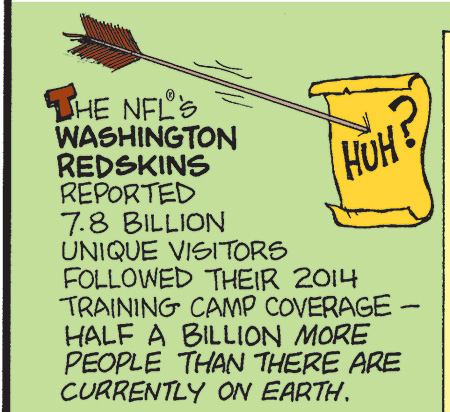 More fans than people on earth

Football is a tough and physical game. Injuries can always derail a team just when they start making a push for victory. Ripley’s predicts that the team with fewer deaths or injuries than the 1905 college season had will win the game.

During the 1905 season, 18 players were killed on the field and 150 were seriously injured. Here’s to a happy and healthy Super Bowl 50! 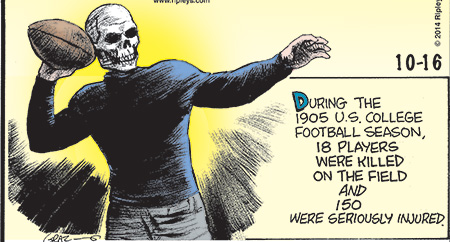 There are always weeks of preparation before the Super Bowl. Both teams rely on hours of film study and scouting reports to try and gain a competitive advantage. But here at Ripley’s, we’re at least certain of one team: the team that scores the most points on Sunday will win the game.

Next post Rare Footage of Last Jaguar in the US