Marvel at the incredible survival adaptations of these marine creatures. 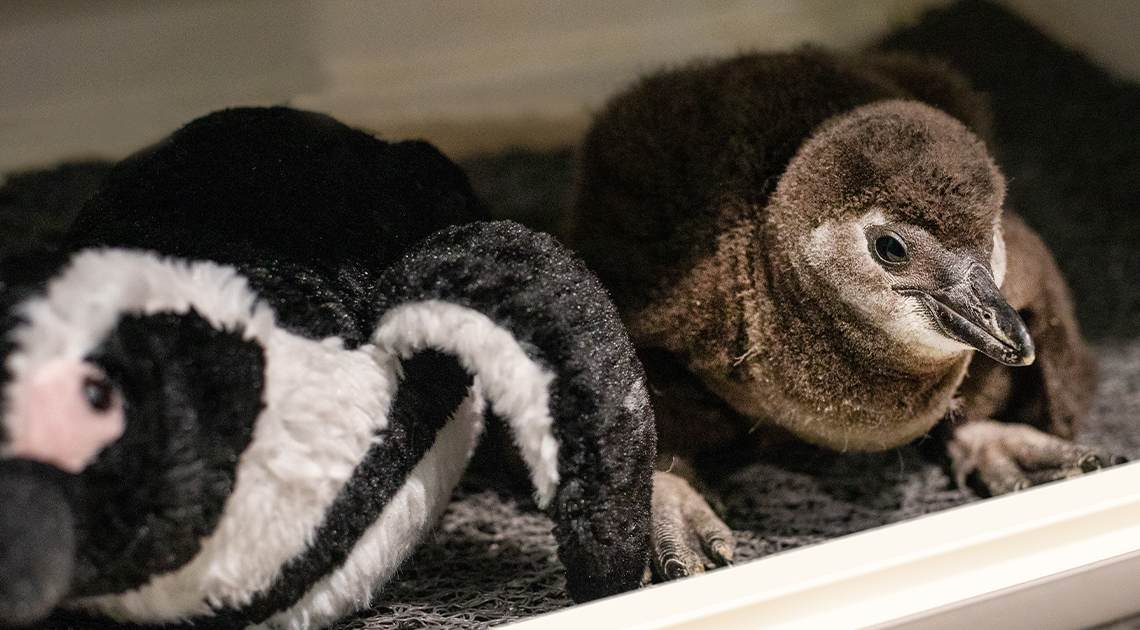 December 4, 2020, is Wildlife Conservation Day, and there’s no better time to explore the hidden depths of the ocean and its diverse array of wildlife. The marine creatures we’re going to highlight today delight visitors who visit Ripley’s Aquarium of the Smokies in Gatlinburg, Tennessee, Ripley’s Aquarium of Myrtle Beach in Myrtle Beach, South Carolina, and Ripley’s Aquarium of Canada in Toronto, Canada. As you’ll soon see, these animals rely on a variety of innovative and impressive adaptations to survive in their underwater worlds.

From shrimp that “hammer” their prey to penguins who sunbathe on hot African beaches, hold onto your seats as we go on a wild ride into the underwater depths of the animal kingdom.

Mantis shrimp are carnivorous crustaceans that fall into the same hard-shelled group of animals as lobsters and crabs. There are almost 500 different mantis shrimp species, and they live in the tropical waters of the Indian and Pacific Oceans, from southern Africa to Hawaii. They grow on average four inches long, although mantis shrimp up to 18-feet have been reported in the wild. 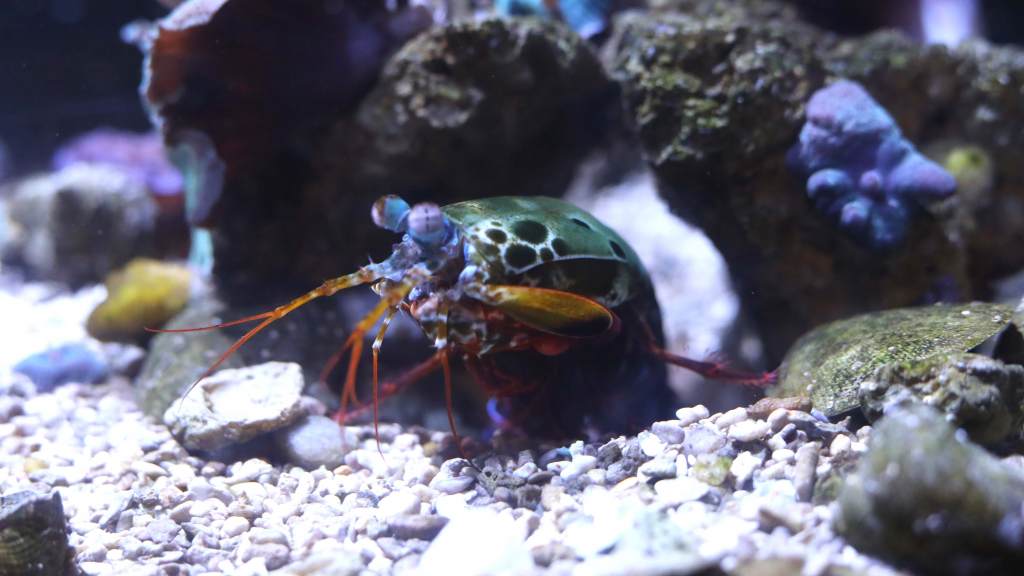 They have some of the most complex eyes in the animal kingdom with between 12 and 16 photoreceptors. (As opposed to just three photoreceptors in the human eye).

What can they see with these eyes? Everything from deep UV and UVB light to circular polarized light. They use their eyes to track prey, but the natural marvels don’t stop there. Mantis shrimp have raptorial appendages specifically designed for hunting. Some species, known as spearers, have spear-like appendages. Others, known as smashers, use calcified hammer-like appendages to clobber their prey. Smashers like the peacock mantis shrimp (Odontodactylus scyllarus) strike their prey with force equivalent to a .22 caliber bullet!

Sawfish, or carpenter sharks, are cousins of sharks, manta rays, and stingrays. They live in tropical and subtropical waters, preferring the estuarine waters of mangroves. Sawfish are endangered due to overfishing and loss of habitat, and their last strongholds remain in Florida and northern Australia. Five species of sawfish exist today, and they’re among the largest fish in the world. Some sawfish can grow up to 23 feet long. That’s larger than a great white shark! 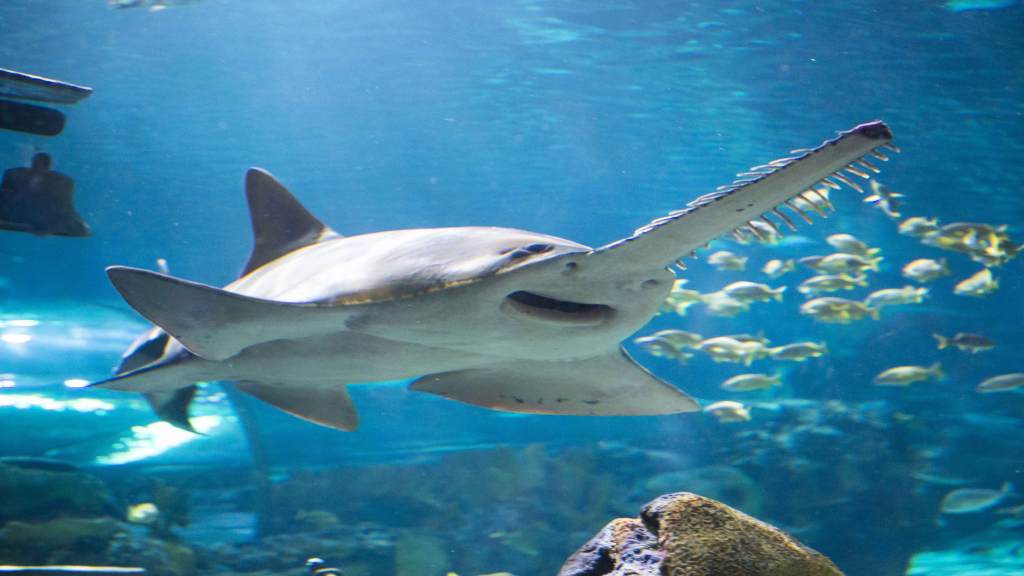 Long, flat snouts, or rostrums, lined with sharp transverse teeth like a saw blade give sawfish away. But these rostral teeth are more like fingernails. They grow continuously throughout the fish’s life and can even regenerate when broken. As long as the break doesn’t occur at the base. How do sawfish use their rostrum? They sense and stun prey with their long toothy snouts. They also use them to defend against predators such as bull sharks and crocodiles.

A type of angler fish, the frogfish gets its name from its frog-shaped body and thick frog-leg-like front fins. Like other anglerfish, a “lure-like” appendage grows in front of its first dorsal spine and can be wiggled like a fishing pole to attract prey. The frogfish’s weird leggy fins permit it to “walk” rather than swim along the ocean floor. Frogfish don’t have swim bladders, making them awfully awkward when they do propel themselves through the water. 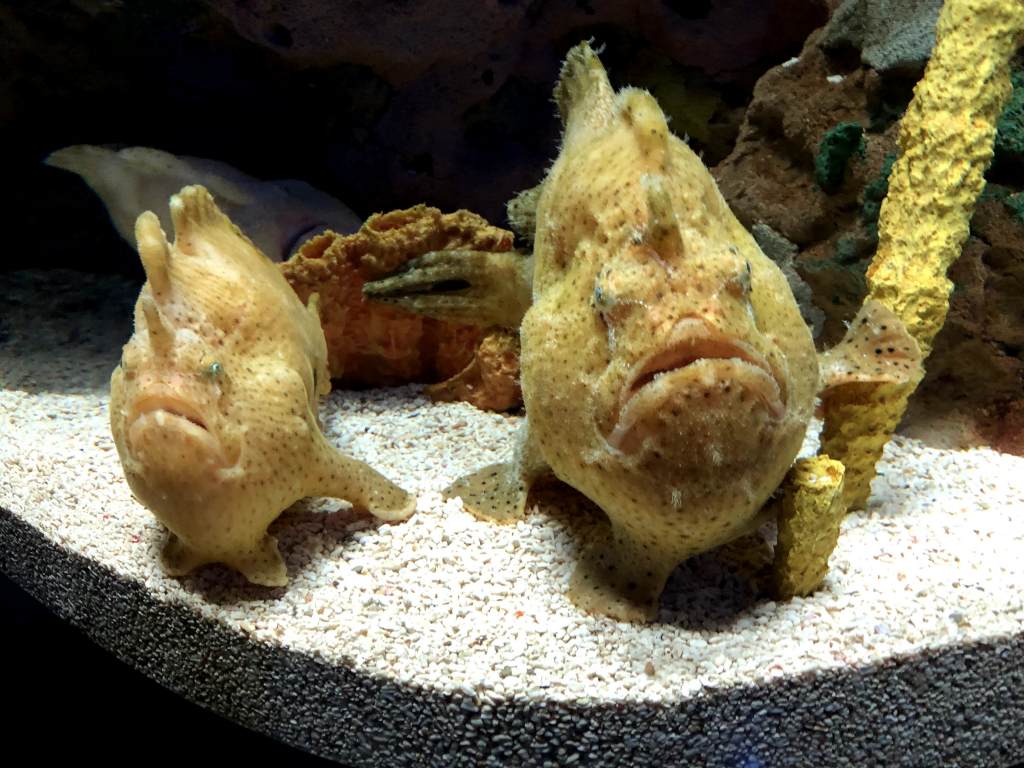 These slow digesters only need to be fed twice a week. Their upward-facing mouths come with extendable jaws, which can snatch prey with frightening rapidity. Native to the tropics and subtropics, they live along the warm coastal waters of the Pacific and Indian Oceans, preferring temperatures around 75 degrees Fahrenheit. Capable of changing colors, it takes them about two weeks to adjust to a new environment’s coloration, whether it’s black, green, red, orange, or yellow.

Did you know that horseshoe crabs are older than the dinosaurs? Or that they have blue blood? These incredible arthropods have inhabited the Earth for 450 million years, and their blood is blue because it’s made with copper rather than iron. While you’ve likely collected their shells on the beach, we bet you’ve never found a live one. That’s because they molt and generate new, larger shells as they grow. Despite their popular name, they’re not related to crabs or other crustaceans. 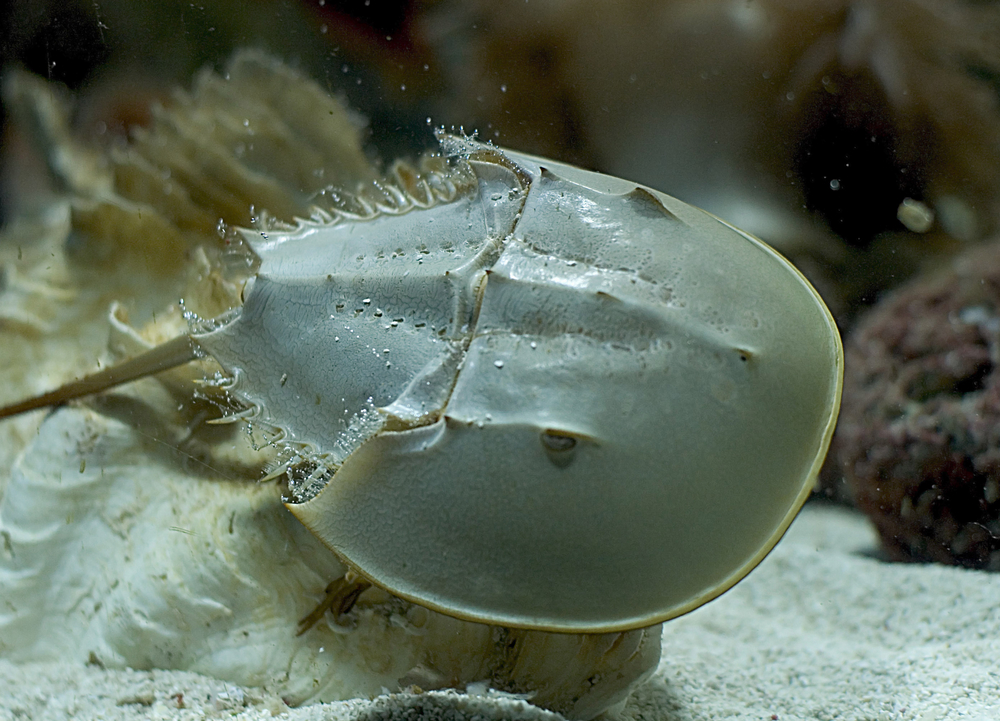 These armored creatures aren’t speedy swimmers, but they can propel themselves through the water by flipping onto their backs and using their gills. Known as book gills, these flap-like appendages each contain more than 100 thin, page-like membranes or lamellae, which look like a book’s pages. In these figurative “pages” gas exchanges take place, permitting the crabs to breathe. What do crabs eat? Because of their slow speed, they can’t rely on hunting. Instead, they scavenge “crumbs” from sharks and rays that fall to the ocean’s floor. Since sharks and rays are both messy eaters, horseshoe crabs always have plenty to devour.

Green sea turtles (Chelonia mydas) can grow to upwards of 300 to 350 pounds and live primarily on seagrasses and algae, although they also munch on insects, crustaceans, worms, and seagrasses when the opportunity arises. They have serrated jaws that help them easily chew these plant-heavy meals. According to Alex McMinn, an educator at Ripley’s Aquarium of Myrtle Beach, don’t tell this to their resident green sea turtle, Gabby… 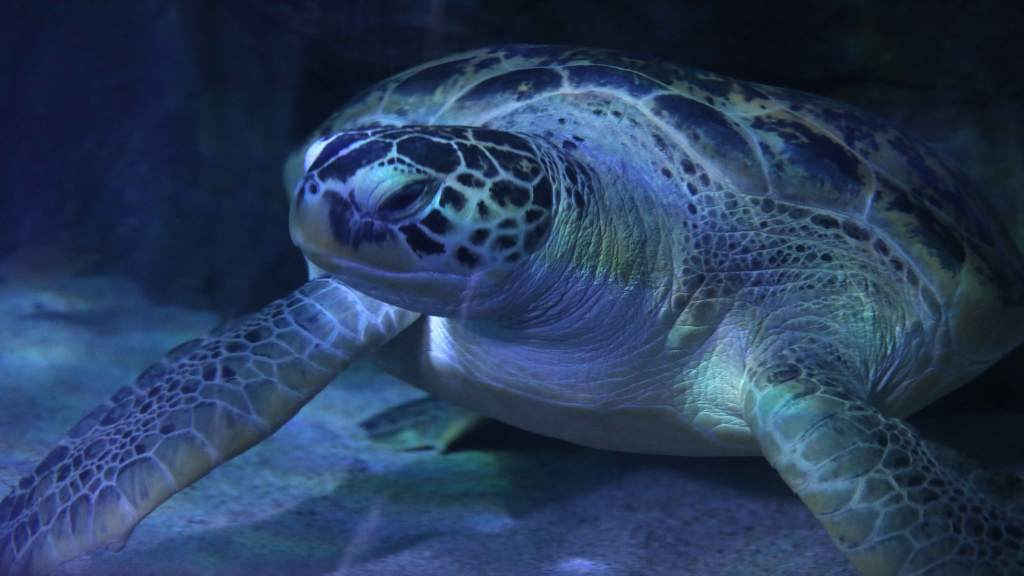 The pampered turtle is obsessed with squid and won’t eat anything else. The Aquarium stuffs squid with lettuce and green veggies to vary Gabby’s diet. Like her peers in the wild, Gabby has a smooth, heart-shaped shell that’s easily recognizable. It covers every inch of her body except for her head and flippers, providing a thorough layer of protection against ocean predators. Since mid-century, green sea turtle populations have been decimated 90 percent due to habitat loss, pollution, natural predation, and diseases. To help this endangered species, zoos and aquariums, such as Ripley’s, provide rehabilitation services.

The African penguin (Spheniscus demersus) is no cold weather friend! Native to South Africa, these birds flock to its sunny, warm beaches. Their bodies rely on fascinating adaptations to make this temperate environment work, even when it does cool off. For example, the black feathers on their back absorb heat when temperatures drop. And their white bellies help them stay cool when it’s warm and sunny. 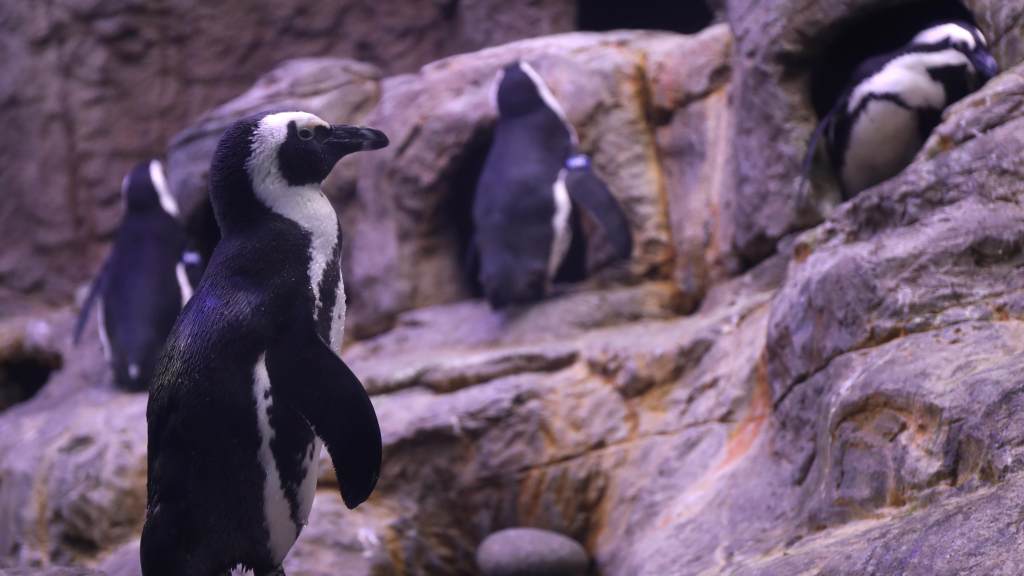 Pink patches around their eyes and on their feet also help regulate their body temperatures. When sea breezes blow, these patches fill with blood providing natural thermoregulation as the blood cools. Penguins don’t have hollow bones and can’t fly, but they are effective swimmers due to their waterproof feathers. They can reach speeds of 12 MPH and stay submerged for two minutes. These talents help the penguins nab their favorite treats, herring, and squid. These endangered birds are getting a helping hand from Ripley’s, in collaboration with the South African Foundation for Coastal Birds, to conserve their numbers.

In addition, our Aquariums are part of the Species Survival Program with our African penguins! Our goal is to have three chicks in three years at our location, in an effort to continue growing the population. Ripley’s Aquarium of the Smokies has already seen great success with new chicks added to their colony. And Ripley’s Aquarium of Myrtle Beach has just recently welcomed their very first chick over in South Carolina, as well!

Conservation for a Brighter Future

These animals are just the beginning when it comes to the diverse variety of wildlife teeming in our oceans. That said, problems ranging from overfishing to plastic pollution mean many of these incredible creatures are now endangered. It’s up to all of us to do our part for a better, healthier future for our planet’s oceans and waterways.

What are a few things you can do to keep our environment safer for animals? Recycle everything you can. Install water-saving showerheads, and save electricity by turning lights off when you leave a room. Walk whenever possible, and drive a fuel efficient car. Little changes lead to big results. Get more easy suggestions for a brighter future for the Earth.

Discover thousands of undersea creatures and breathtaking galleries when you visit a Ripley’s Aquarium!

Next post Crafty Fisherman Pipe-Cleans Up With Record-Breaking Catch