World Sword Swallower's day is right around the corner, and this year, we're looking at some of the more extreme sword swallowing we've seen. 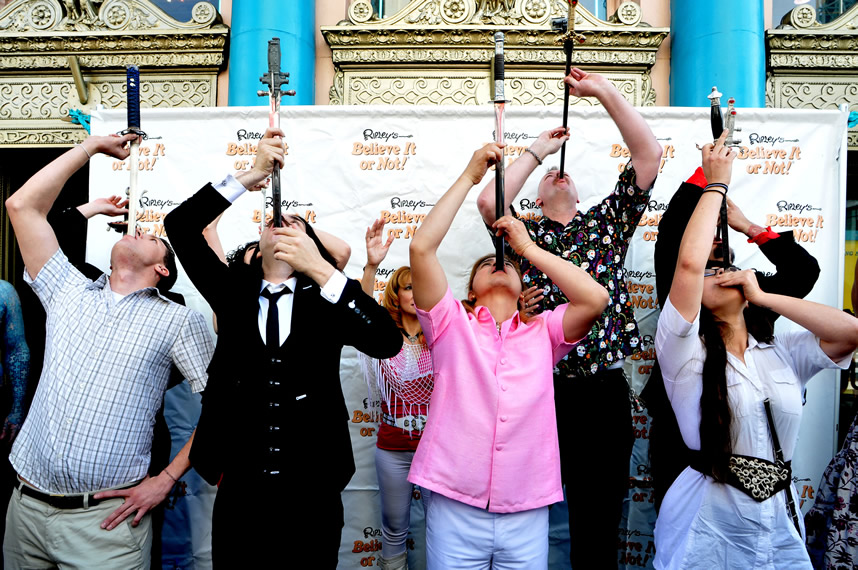 February 25th, 2017 marks this year’s World Sword Swallower’s day! That Saturday at participating Ripley’s Believe It or Not! Odditoriums, sword swallowers from around the world will gather and perform their skill for crowds of onlookers.

Ripley’s has co-sponsored the event since 2009, and we’ve written about it before. But this year, we want to go even bigger with our coverage and talk about some of the more extreme sword swallower’s and sword swallowing events we’ve seen.

The human body is awesome. This is my one opportunity to show off what my body is capable of doing pregnant.

In 2009, Natasha Veruschka set a world record for the longest sword ever swallowed. The sword in question was 58 cm (22.83 in) long. Whether or not the record still stands is something we’ll come back to shortly. But in the meantime, here’s Natasha showing off her exceptional skills for Ripley’s Sword Swallower’s days in 2010. The sword here is 28 in long, and the twist is quite impressive.

For most people, sharp things are to be avoided, and fire is to be avoided. Dan Meyer decided to combine the two. The handle of this sword is so hot it’s setting things on fire with a single touch. Dan swallows the sword and gets the handle right up next to his face. Wow!

Multiple Swords Swallowed at Once

Chayne “The Space Cowboy” Hultgren is someone else right up at the top of the ranks with Dan. He holds numerous world records and awards for sword swallowing as well as his other extreme stunts.

I mentioned Natasha’s 28-inch sword earlier, but there’s a video of Chayne swallowing a sword with a 72 cm (28.35 in) blade. So it would seem that he holds that record for the time being.

If you’re interested in seeing more of these incredible sword swallowing feats, be sure to drop by your local Ripley’s Odditorium on 2/25 and enjoy the free show.

Previous post Where Are These Mysterious Desert Arrows Pointing?