The Walking Dead Of Tana Toraja 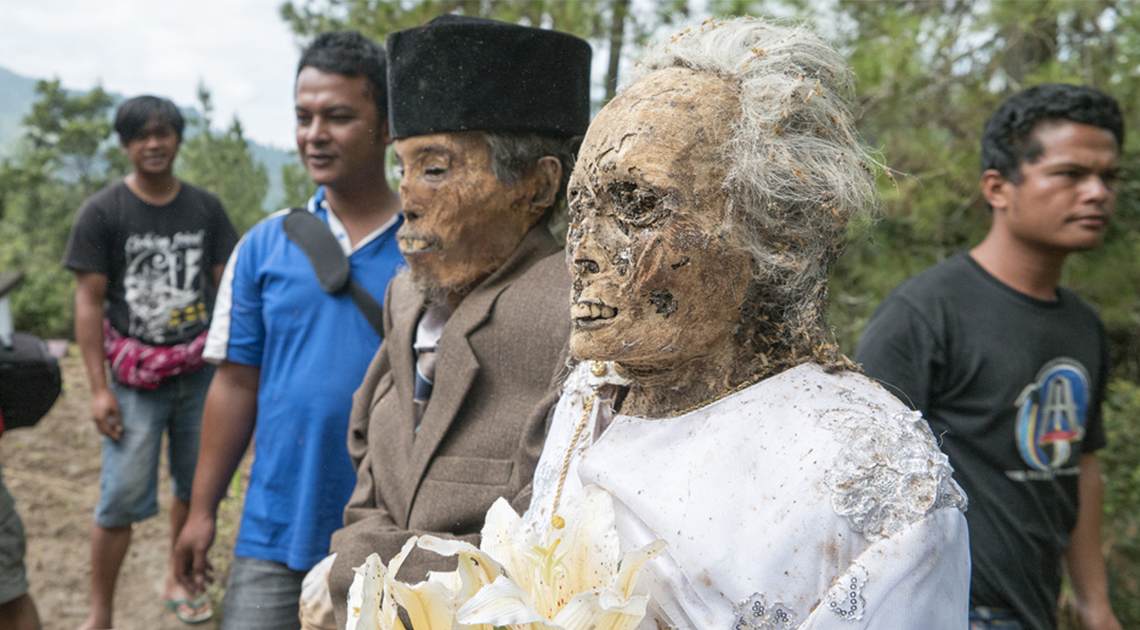 For residents of Tana Toraja, the walking dead are more than just a phantasmic phenomenon—it’s a reality!

However, unlike those from the hit TV series and despite viral rumors to the contrary, these corpses do stay dead. Located in the mountainous island of South Sulawesi, deep in the heart of the lush jungles of eastern Indonesia, Tana Toraja is known as the “Land of the Heavenly Kings.” There, Torajans are renowned worldwide for their beautiful tropical climate, harvesting delicious arabica coffee and cocoa beans…and their bizarre funerary rites.

The people of Toraja adhere to cultural guidelines that see their lives constantly revolving around death. Following in the traditions of their ancestors, funerals supersede in both expense and extravagance their marriages, birthdays, and—in a way—are ongoing year-round holidays.

The Torajans see death not as an event to be mourned, but as a celebrated transition to their ancestral resting place, Puya. In fact, Torajans do not even view members of their community as being dead until their public funeral has been completed. Prior to this ceremony, once an individual’s sunga, or biological life, has ended, their body is mummified and kept in a special room within the tongkonan, the traditional Torajan home. There, the family continues to speak and interact with the decaying body, including symbolically feeding and caring for it. 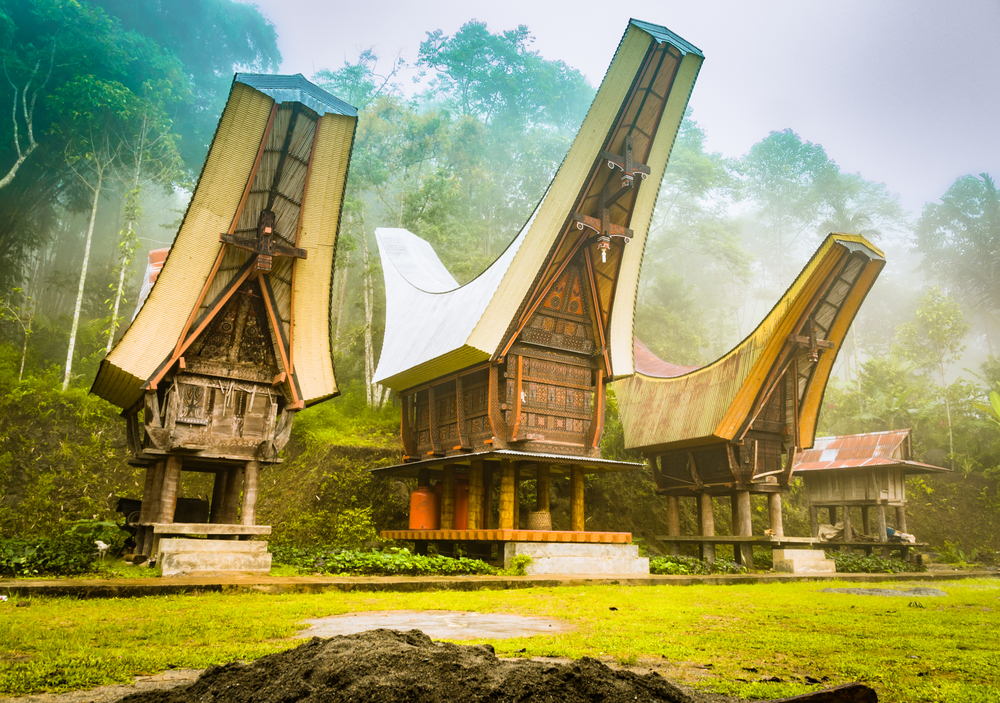 During this time, the deceased is considered to be to makala or to mama, sick or asleep. The funeral service, aluk to mate, can occur years after death as the family saves money for the funeral, sometimes even at the expense of living in poverty.

One of the most important aspects of the funeral is a painted bamboo or wooden effigy made in the exact likeness of the deceased, called a tau tau, which Torajans believe hosts part of the soul. The tau tau is carried alongside the body through the village in a colorful parade procession that can be upwards of a mile long and last for hours. 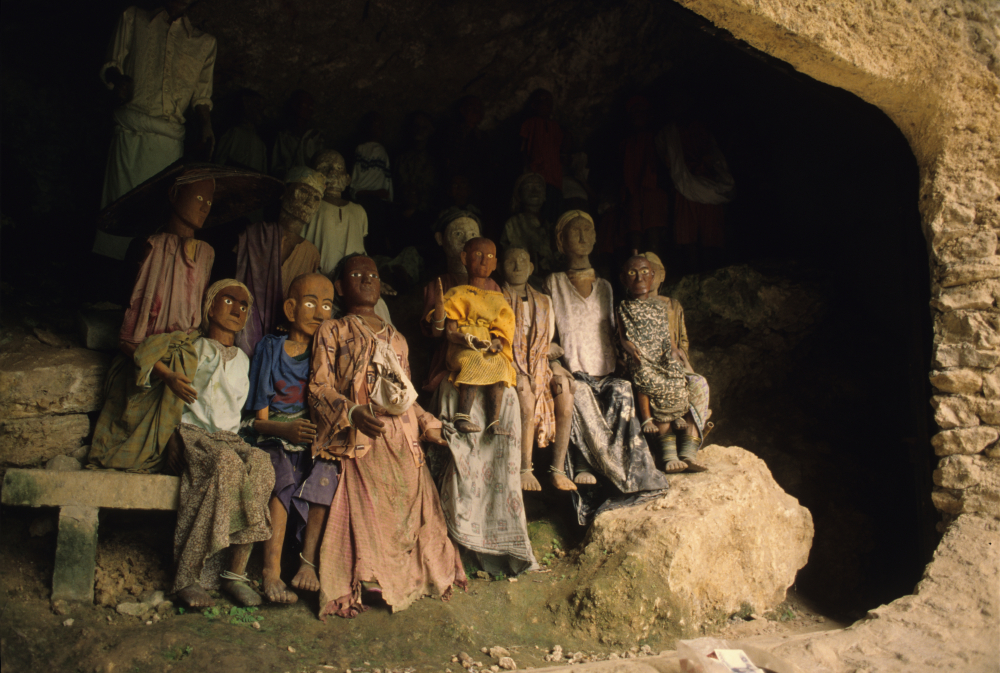 A collection of tau tau dolls.

All members of the community, up to thousands of people, may attend these joyous multi-day or even multi-week events. Rituals for those in attendance include joining hands in prayer, dancing and singing songs to celebrate the life of the deceased, and animal sacrifices—the meat of which is divided among the mourners. The most important sacrifice made during this ceremony is of the water buffalo, which the Torajan people believe transports the soul of the departed to the afterlife.

After the funeral has been completed, the body is rather interred within a mausoleum, a tomb built into the face of limestone cliff walls, carved into mammoth rocks, inside of a hollowed-out tree, or hanged from a mountain in a bamboo frame. Wherever it may be, the tau tau stands as a silent sentinel, watching over the final resting place and family of its subject. In exchange for its service, gifts, such as beer, candy, and money, are regularly left with the tau tau.

Arguably the strangest aspect of this culture is the ma’nene. During ma’nene, corpses are exhumed from the grave, cleaned, and dressed in new clothing. If needed, maintenance is conducted on their crypt, their casket repaired or replaced. The mummified remains, now freshened up, are paraded through town, where relatives can take pictures and videos with their family members who have passed. While some may see this practice as macabre or grotesque, the Torajans look at it as a powerfully devotional act of veneration and faith, a love which simply does not cease with death. 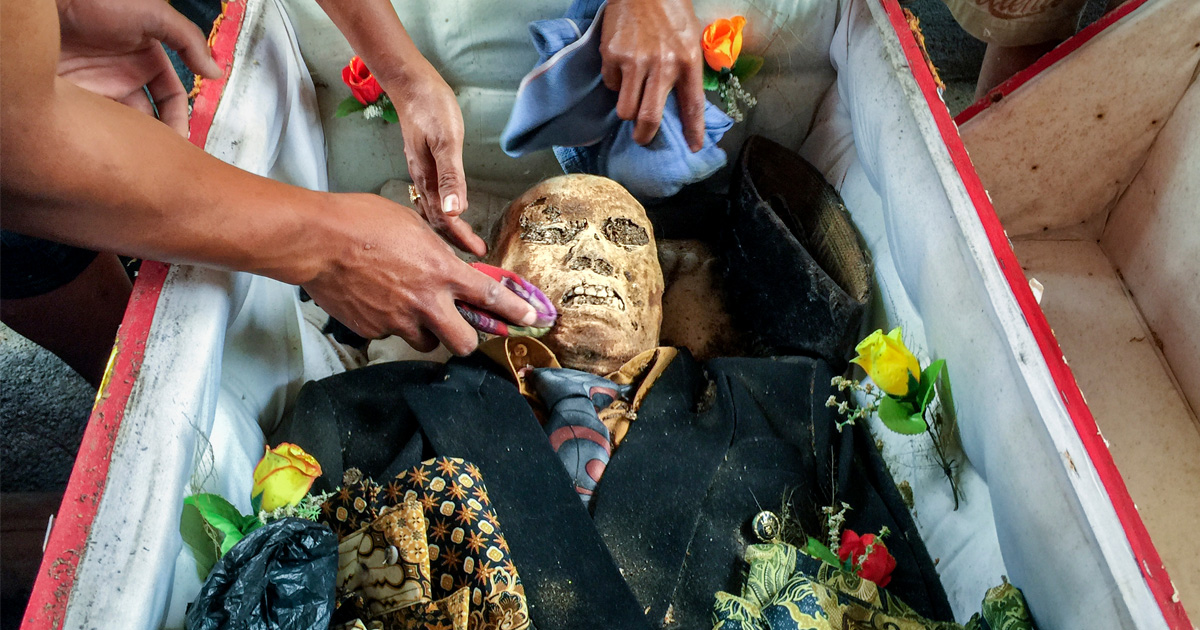 Pictures of this extraordinary spectacle first surfaced online in 2009 and caused an incredible stir—and it’s easy to see why. Online users were led to believe that, somehow, Torajan shamans possessed the power to bring the dead back to life as ro-lang, literally a “risen corpse.” Allegedly, these gaunt spectres would lead the funeral procession to their own grave as they walked a dirt path between the tongkonan houses on the beat of their “corpse road.” It was said that if these revenants were spoken to or interacted with by anyone other than their designated handler, they would crumble in a pillar of salt. Additionally, it was said that, after several years of internment, the dead would return on occasion to walk among the living. In the past, it was even alleged that there were civil wars in the area that were conducted entirely by armies of the undead! 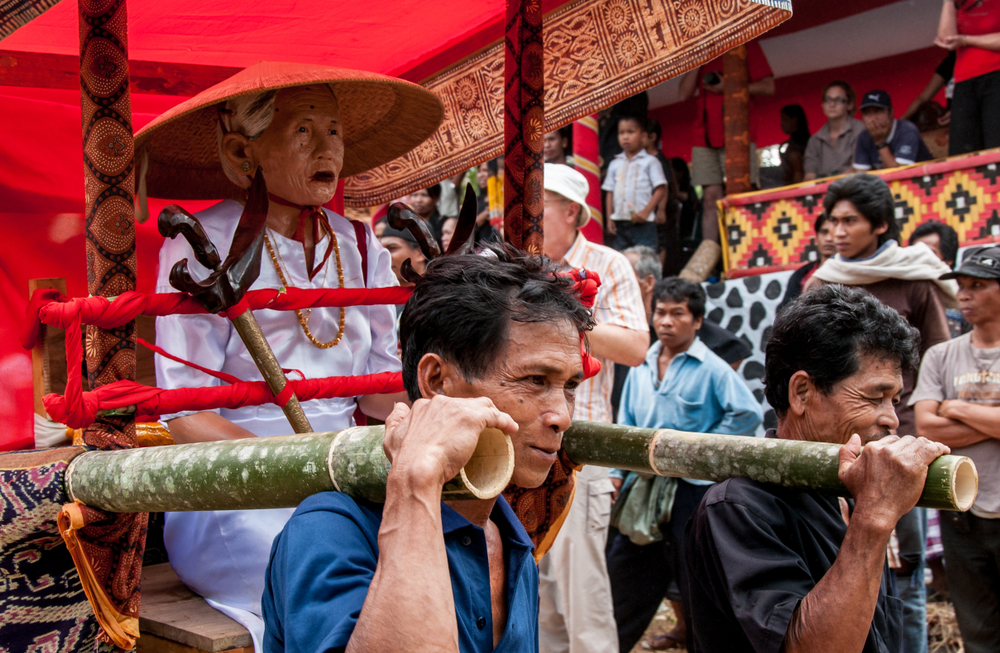 These tales did not begin solely online, however. Torajan folklore holds myths of the walking dead as a part of their rich cultural fabric. They insist that the aforementioned phenomena can actually be performed with black magic rituals, knowledge of which is considered “not appropriate” for modern society.

The people of Toraja have developed a booming tourism industry surrounding these unusual funerary ceremonies. Be aware that if you want to be a part of a Torajan funeral, you should be prepared to bring gifts for the family of the deceased (such as cigarette cartons or bags of sugar) and can then expect to partake in coffee and sweets with them.

While some of the most fantastical elements of this story were the fabrication of hoaxers, no embellishment or sensationalism is needed for this incredible tale. Believe It or Not!

Next post How Did This Ram Skull Get Inside A Tree?