No monkeying around when it comes to these local primates!

Every year, the city of Lopburi, in central Thailand, goes to the monkeys. On the last Sunday of November, residents host a feast exclusively for 3,000 long-tailed macaques. Serving massive towers of colorful fruit and vegetables, as well as just about every sweet you can imagine, the festival is held as a “thank you” from locals to the monkeys for attracting tourists to their city. However, the roots of the buffet run much deeper than simple gratitude.

A City with a Storied Past

Located 93 miles from Bangkok, archaeological evidence confirms that Lopburi has been continuously inhabited for at least 3,000 years—this makes it one of the oldest and most historic cities in Thailand. Due to a millennia-worth of human habitation, the city boasts countless ancient sites dating from a variety of civilizations and dynasties. 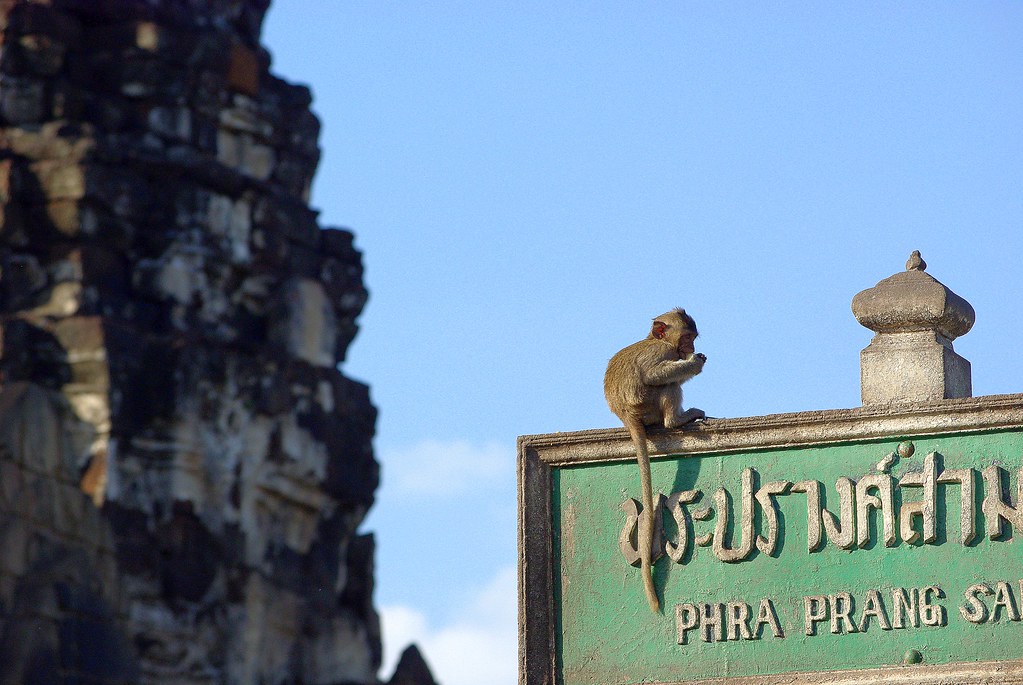 Lopburi also maintains a reverence for monkeys inspired by the city’s ties to the ancient past and is even known as the “Monkey City.” The monkeys of Lopburi interact with locals and tourists throughout the year. And they live among the ruins of the ancient Khmer Empire.

Rolling Out the Red Carpet for Lopburi’s Macaques

From what began in 1989 by hotelier Yongyuth Kitwattananusont, the Monkey Buffet Festival was launched with the help of the Tourism Authority of Thailand. Over the years, the festival has expanded to include larger numbers of primates. In turn, it has seen an increase in the number of visitors who attend this unique event.

In the week leading up to the festival, locals pass out “invitations” to the monkeys with cashews attached to them as a small incentive. But, Lopburi’s residents don’t stop there when it comes to rolling out the red carpet for their furry neighbors.

The action centers around the ruins of the 13th-century Phra Prang Sam Yot Temple where about half of Lopburi’s monkeys live. The Monkey Buffet Festival begins with performances by dancers dressed in monkey costumes. They dance to gain the attention of the macaques.

Although human dancers dressed in monkey costumes may sound like a strange way to draw out local primates, it works. Years of conditioning have taught the macaques to welcome these human antics. After all, they represent the precursors of an out-of-this-world feast, at least from the monkey perspective. 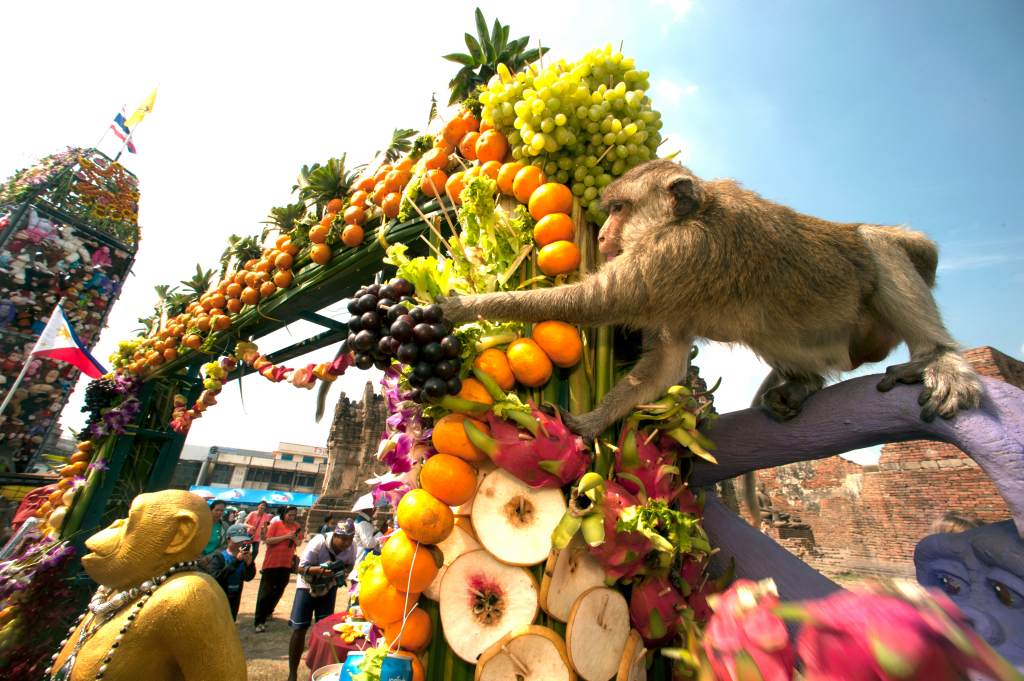 Soon, thousands of macaques are drawn from the jungle and into the temple ruins by the spectacle. There, they partake in a feast of truly epic proportions. More than 8,000 pounds of colorful fruit and food is presented on long tables decorated with red or purple tablecloths. Besides monkeys, the festival also draws 10,000 human visitors each year. Of course, there’s plenty of food for them, too.

Imagine watching thousands of monkeys climb towering pyramids of pineapple, watermelon, durian, and more, munching on these human-made displays along the way. They also jump across tables and get in occasional squabbles, all of which provide comical photo ops. 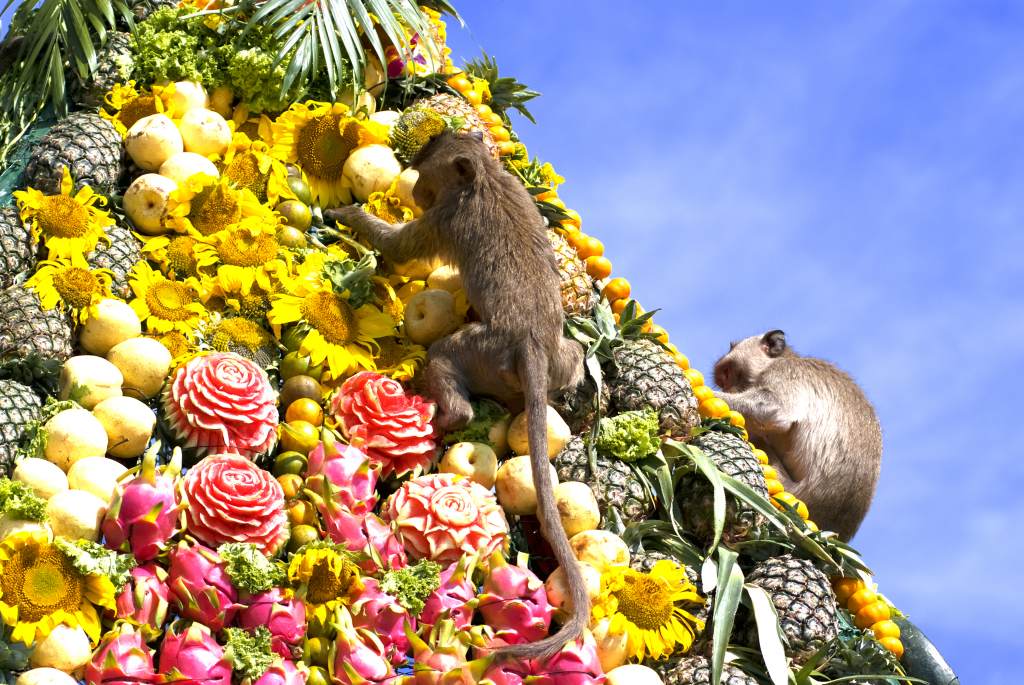 Besides healthy eats, plenty of junk food treats abound, from sticky rice to Thai pastries and desserts. The monkeys wash down their meals with bottles of juice and cans of soda.

Certainly, the event has evolved into a highly successful tourist attraction, and Lopburi is starting to benefit from the influx of visitors and increased media coverage. Although, there is more to this tradition than economic gain or good press.

Paying Homage to the Monkeys of Lopburi

The Monkey Buffet Festival marks the culmination of more than two thousand years of respect for monkeys. This reverence was inspired by the epic tale of Rama described in the Ramakien, Thailand’s national epic. The Ramakien is derived from the Hindu Sanskrit Ramayana of India and translates as the “Glory of Rama.”

In the tale, Rama, a divine prince struggles, to rescue his wife, Sita, from the evil clutches of the demon lord. At the height of the tale’s action, Hanuman, God-king of the monkeys, comes to Rama’s aid helping to reunite the couple.

Because of the Ramakien and the Ramayana, Lord Hanuman is still worshipped in Thailand and India to this day. As a result, Thailand’s local macaques receive a variety of special privileges, and locals patiently put up with their wild antics.

Beyond tons of food and plenty of primate mischief, the buffet celebration includes vibrant musical and dance performances, highlighting the richness of Thai culture. There are also contests and fun displays to check out, giving the festival a carnival vibe. 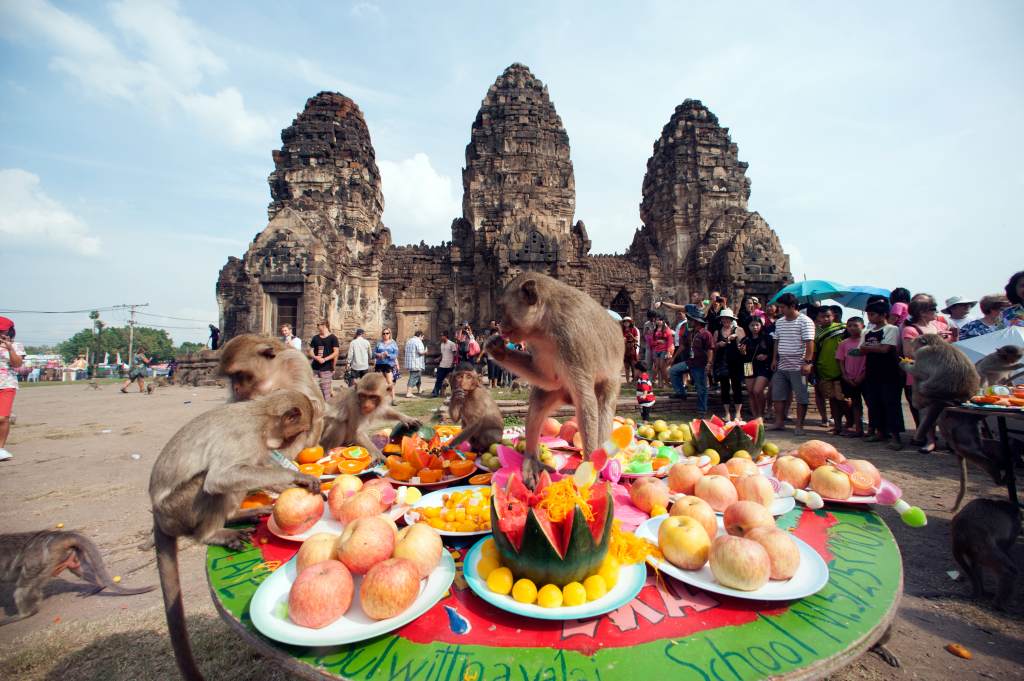 The Monkey Buffet Festival is like no other, filled with vibrant cultural highlights and an improbable but fun guest list. Locals believe the festival brings prosperity and good luck to the region, and it definitely provides tourists with a one-of-a-kind, eye-catching spectacle.