From presidential pups to Billy the hippo, the White House has seen it all.

What’s a presidency without a pet (or ten)? Our former United States presidents have had a slew of animals occupy the White House during their time in the Oval Office. Inevitably, many of these pets became just as notable as their owners — some even earning themselves TV spots and newspaper headlines.

Between raccoons, hippos, dogs, bobcats and even bears, there’s been a longstanding history of traditional and not-so-traditional White House pets and we’ve rounded up some of our favorites…

Calvin Coolidge: The Zoo and Billy

Calvin Coolidge had a zoo of his own: twelve dogs, a few birds, a goose, a couple of cats, raccoons, a donkey, a bobcat, a black bear, a wallaby and a pygmy hippo. Exotic, right? Well, you may be wondering what a pygmy hippopotamus is — us too. This rare animal is a Liberia native and was gifted to Coolidge by Harvey Firestone, founder of Firestone Tires and American businessman. The hippo’s name was Billy.

Coolidge donated Billy (yes, all 6 feet and 600 pounds) to the Smithsonian National Zoological Park as he was one of few remaining in the U.S. He was a dad to 23 baby pygmy hippos, which now account for the majority of pygmy hippos at American zoos. Look out for Billy’s fam next time you hit up your local zoo! 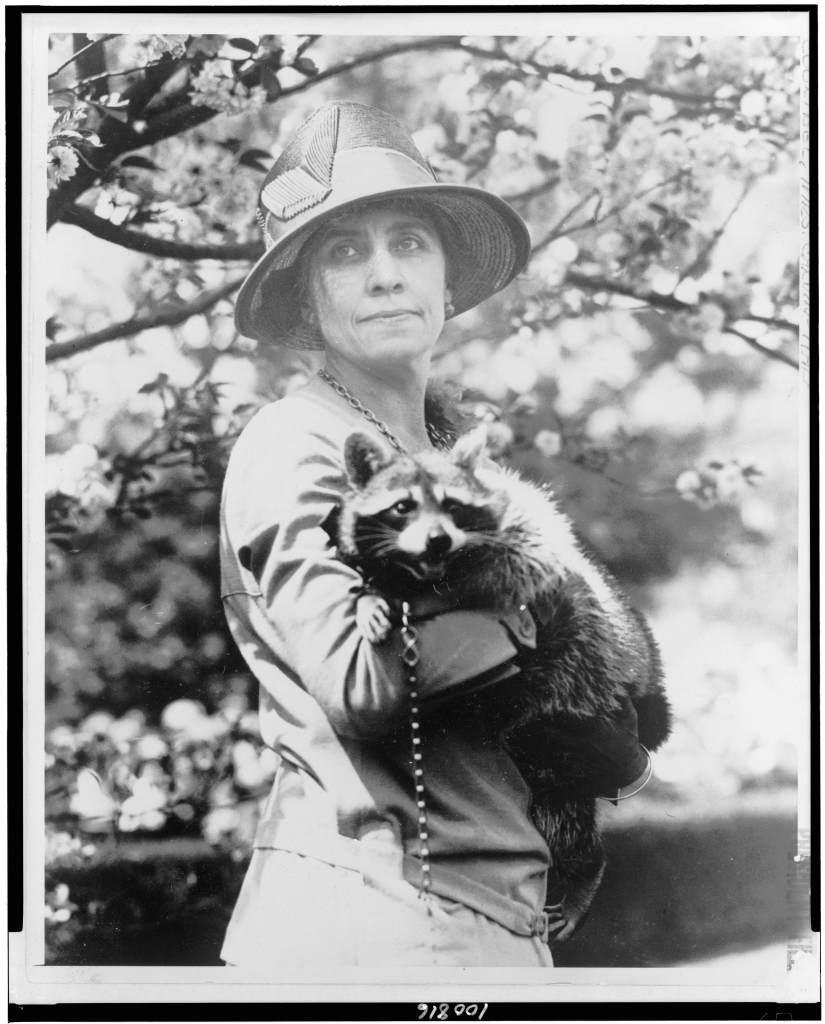 Rebecca the raccoon. Via Wikimedia Commons

The Coolidges also donated their pet raccoon Rebecca to the Smithsonian. She was originally supposed to be part of their Thanksgiving meal, so I think we can agree that she made out well given the circumstances.

Dogs, horses, and snakes — oh my! President Theodore Roosevelt, who served eight years, had his fair share of animals while in office. Roosevelt had many horses, a pony, some dogs, snakes, kangaroo rats, badgers, cats, a squirrel, guinea pigs, a lion, hyena, wildcat, bears, parrots, a zebra, a lizard, a pig — the list could go on for his full two terms.

They say never pick favorites, but Roosevelt couldn’t resist. His best bud was his pet horse Bleistein, who was gifted to him by his friend George Bleistein. Roosevelt loved to take his horses riding by the creek and Bleistein was his perfect companion. Roosevelt always said that Bleistein was courageous and had good nature.

There was also Pete. Pete was a bull terrier who popped up in headlines, but not always for great reasons. He was loved and adored by the Roosevelt family but had one too many biting incidents when it came to White House staffers. They eventually sent the dog back to the family’s home in Sagamore Hill.

President John F. Kennedy was also known for his collection of animals — not as exotic as Coolidge’s, but still plentiful. He was proud owner of many dogs and one cat. He also cared for a canary, parakeets, ponies, horses, hamsters and a rabbit.

The rabbit, Zsa Zsa, was gifted to the First Family by a magician. Zsa Zsa had outgrown the magician’s hat and could no longer perform magic tricks. However, she did deserve her time as a White House resident — Believe It or Not!, Zsa Zsa could play the first five bars of “The Star-Spangled Banner” on a toy trumpet (at least, that was the word on Pennsylvania Ave.).

Their legacy lives on as owners of some of the most adorable White House pets. Say hello to Barney, Miss Beazley, and India. The Bush family definitely scores high in the name game.

Barney and Miss Beazley were both Scottish terriers who lived a lavish life in the presidential suite. They were basically pet-leberties. Not only did they have websites, but they also appeared in White House–produced videos. Next stop: Hollywood. 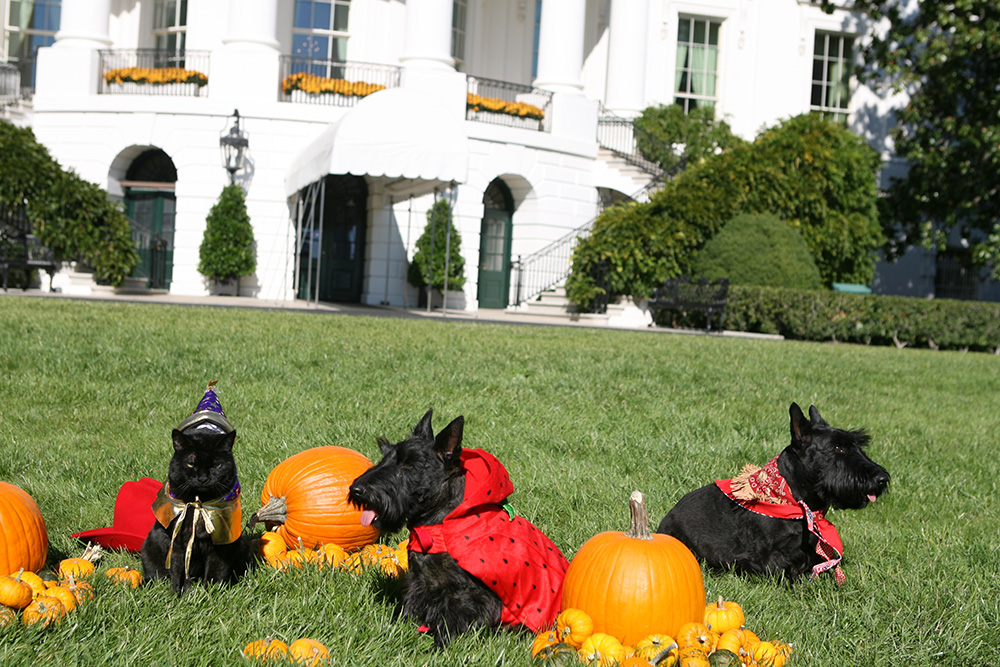 In addition to the two pups, there was also a cat named India, a.k.a. “Willie.” He was named after Texas Rangers player Ruben “El Indio” Sierra, who was part of the roster while George W. Bush was owner of the team.

Tiger King better give credit where credit is due. The O.G. Tiger King was also the eighth president of the United States – Martin Van Buren. He was gifted these big cats by the Sultan of Oman and was directed by Congress to donate them to the zoo. Bye to all the cool cats and kittens!

Lyndon B. Johnson: Him and Her

There were six dogs in total over the course of Johnson’s presidency, but the most notable duo was Him and Her. This pair of beagles luxuriated in their pimped-out doghouse. Johnson upgraded the White House doghouse for his furry friends, Extreme Home Makeover–style. There was a lot more room for the pups to run around, sleep and play.

Willow the cat was White House material ever since she jumped on stage during Jill Biden’s campaign speech in 2020. There was no denying she’d make the perfect First Pet. Willow’s original owner gifted the cat to The Bidens and the rest was history. 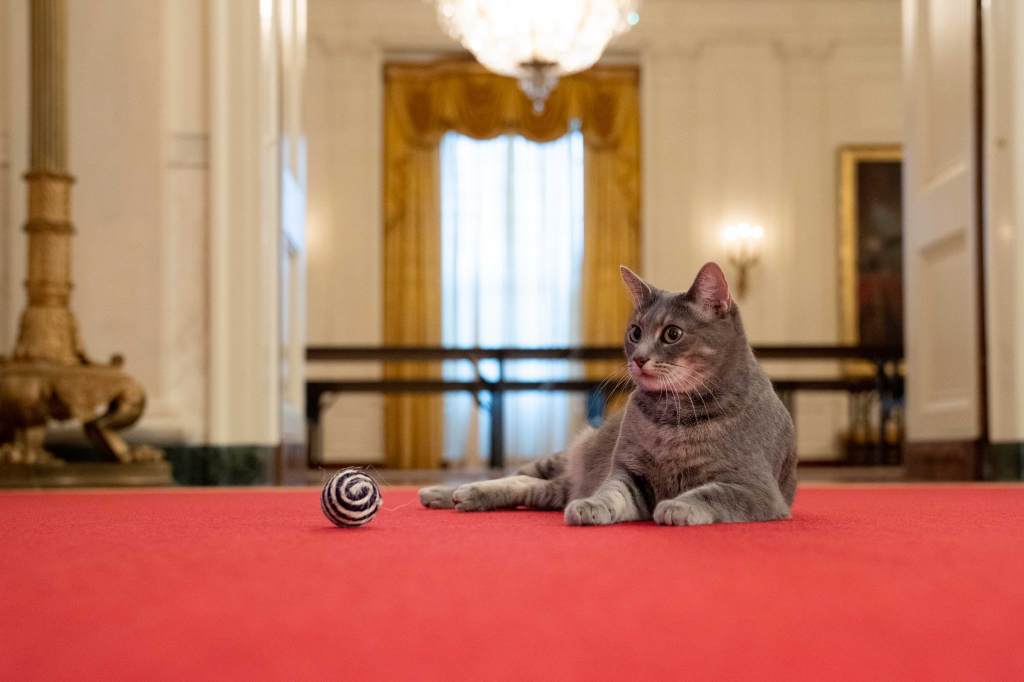 The Biden family also started their White House residency with two German shepherds, Major, who was sent off to live with friends after a few unprecedented bites and Champ, who passed shortly after. Don’t fret though – The Bidens adopted Commander, another German shepherd to ensure they were in good company.