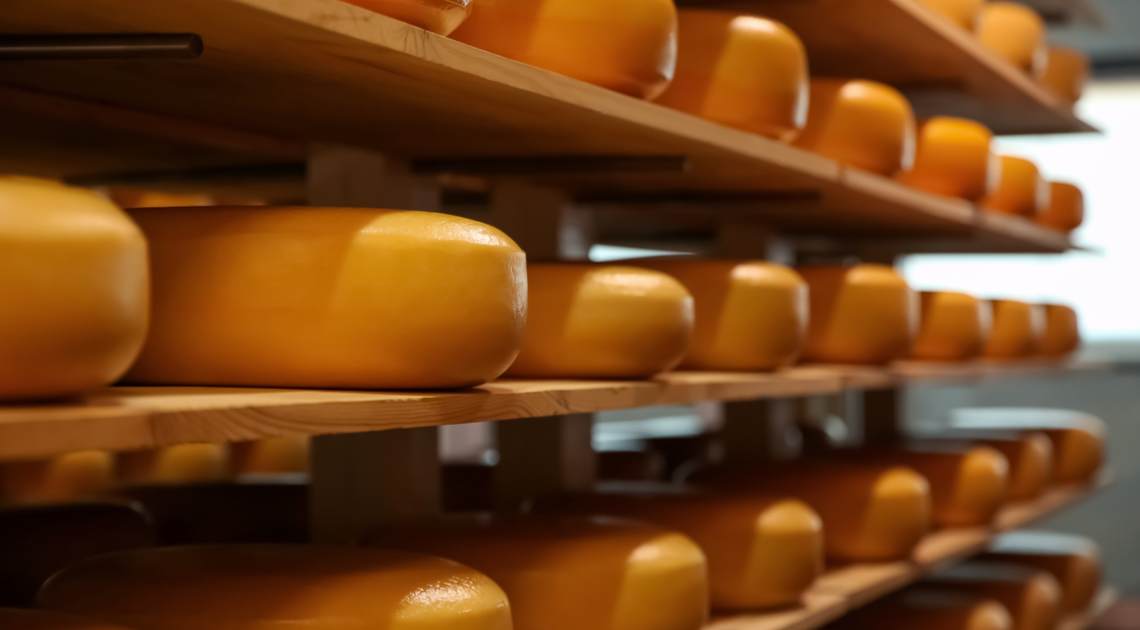 What comes to mind when you hear the term “government cheese”? If you’re a child of the 1980s, it likely involves recollections of a salty, pale-orange substance that came in five-pound blocks. Some might describe it as the unfortunate (and moldy) offspring of American cheese and Velveeta. Meted out to low-income families and the elderly, it helped people muscle through difficult economic times. And a whole generation of children grew up on the stuff.

The strange and sordid tale of dairy gone wrong starts in 1949 with the Agricultural Act, which granted the Commodity Credit Corporation (CCC) authority to subsidize dairy farmers by purchasing their excess goods. The CCC received this power to help stabilize farm incomes during times of economic challenge. But getting this right proved more complicated than officials anticipated, and it would lead to a nearly unpalatable solution.

Here’s what you need to know about the free cheese movement and why it left a bad taste in many people’s mouths.

Too Much Disco, Not Enough Dairy

The 1970s represented a mixed bag in America. On the one hand, this decade gave the world disco and Queen, but it also came with long gas lines, the Great Inflation, and the Iranian Hostage Crisis. And if that wasn’t enough, the decade also saw a drastic dairy shortage, resulting in price increases of 30 percent. This led to government intervention and $2 billion in subsidies awarded to dairy farmers over a four-year time span.

Suddenly, the government became the largest consumer of the nation’s dairy supply. This raised an important question: What to do with all that creamy goodness? Soon, the Feds got into the business of butter churning, powdered milk making, and cheese processing. Before long, the nation’s stockpile of dairy products had ballooned out of control, with stores holding more than 500 million pounds in warehouses spread across 35 states, per the Farm Link Project.

By the early 1980s, the moldering cheese problem reached a breaking point in the United States. In a Washington Post article from 1981, a USDA official diplomatically suggested that the most cost-effective solution to the dairy deluge would be to “dump [the government cheese] in the ocean.” Anxiety ratcheted up with each passing year because no one knew how long the shelf life on those pungent blocks might be.

The crisis reached its stinkiest moment when former U.S. Secretary of Agriculture John R. Block brought a five-pound chunk of government cheese to the White House. Holding it aloft as he spoke to the press, he declared, “We’ve got 60 million of these that the government owns. It’s moldy, deteriorating … we can’t find a market for it, we can’t sell it, and we’re looking to try to give some of it away.” The war cry delivered; Americans stepped up to do their part. Soon, millions of pounds of cheese got distributed to the elderly, low-income families, and organizations who served them.

The people who received “government cheese” had varied responses. Some appreciated the extra help, while others saw it as socioeconomically stigmatizing. As for the palatability of the five-pound blocks, the verdict remained out. To this day, most people that ate it remember the strong odor and the savory flavor. Some recollect its odd texture, which made it less than desirable for snacking. But it lent itself well to grilled cheese sandwiches and macaroni and cheese.

Fortunately, the Federal government exited the cheese-making industry in the 1990s, and most people who consumed “government cheese” unanimously said “Good riddance.” But those who grew up on the substance do hold some fond memories of it. For a handful, it even came to represent a type of comfort food. Tracey Lynn Lloyd, a food writer, concludes, “If someone made me a grilled cheese with government cheese today, I probably couldn’t eat it … But I’d still take one bite, just for the memories.”