The Legend Of Shep, The Dog Who Never Stopped Waiting

For the rest of Shep’s life, he would be a train station icon, appearing every day in hopes that his master would return by rail. 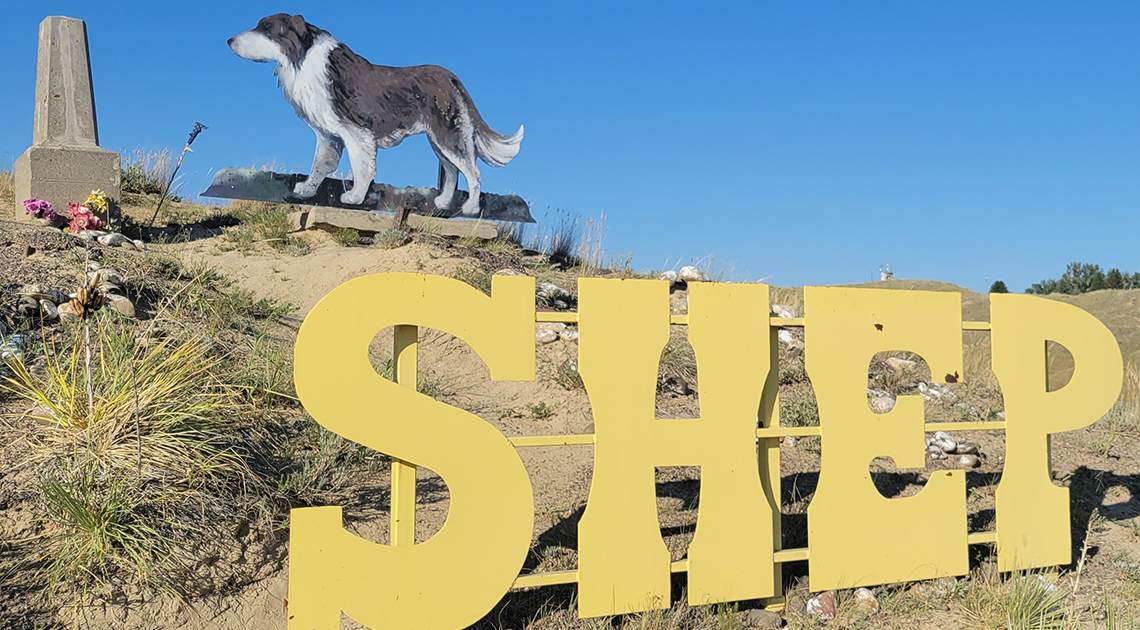 Remarkably, dogs have been our loyal companions, hunting partners and best friends for perhaps 400 centuries. It’s estimated that humankind domesticated dogs between 20,000 and 40,000 years ago! In all that time, it seems there’s rarely been a more loyal, or iconic, canine friend than Shep.

The Tragic Loss of a Best Friend

The legend of Shep began in Fort Benton, Montana. In 1936, St. Clare Hospital had a seemingly unassuming patient: a sheepherder. The livestock wrangler’s name is unknown, but their faithful pet would soon become the stuff of legend.

This companion was a sheepdog who waited outside the hospital every day, not allowed to enter but cared for by staff who noticed his dedication. Perhaps the dog knew that his friend wasn’t long for this world, for the sheepherder sadly died not long after beginning their stay at St. Clare.

It was decided that Shep’s best friend was to be transported by train so the body could be laid to rest near the deceased’s family, who lived to the east. Undertakers prepared the body for the trip, and as it was being placed on board for its final journey, Shep watched from the train platform.

As in so many heart-wrenching movies, the dog is said to have followed for a moment as the train gathered speed, watching sadly as it traveled out of sight. For the rest of Shep’s life, he would be a train station icon, appearing every day in hopes that his master would return by rail.

According to one report, the stray dog was very wary of the people at the station at first, and he had a tendency to hide himself away in shadowy corners of the platform as he awaited the next train. As he became more and more of a fixture, though, the staff gained his trust, fed and cared for him, and gave him the name Shep.

Shep could have simply been disregarded as a stray and shooed away, but instead he became a local celebrity. The report goes on to say that many Fort Benton residents wanted to become Shep’s new owner, but the station was the one and only home he wanted — just in case his lost master returned.

So popular was Shep that he began to receive fan mail, and huge quantities of it too: station general manager T. F. Dixon assigned the job of trawling through all of Shep’s adoring mail to his secretary!

There’s no doubt that Shep had become a true superstar. Some travelers came to the station simply to catch a glimpse of him! In fact, he was even featured in a 1939 “Believe It or Not!” cartoon panel drawn by Robert Ripley himself. 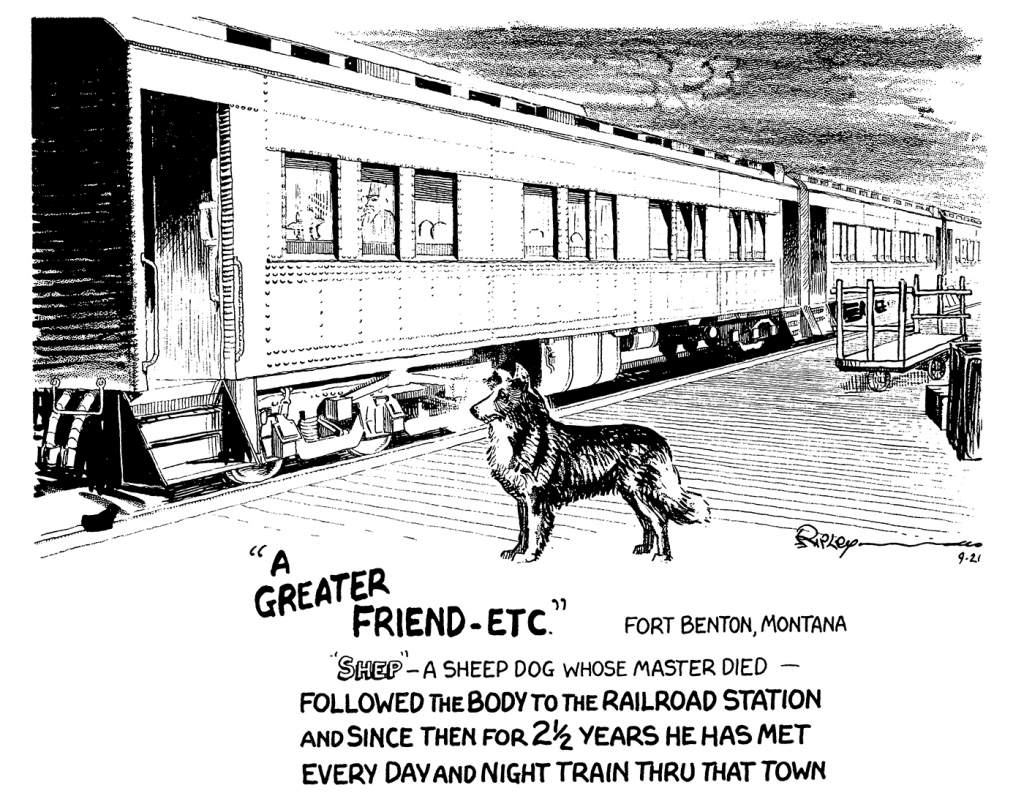 The inclusion of Shep in the world-famous “Believe It or Not!” cartoon further catapulted the faithful dog into fame.

Faithful Till His Last Breath

On the morning of January 12, 1942, Shep was struck by a train and did not survive. His hearing had been failing, and he was not the agile young canine he once was. By the time he noticed the locomotive it was too late, and he could not move off the tracks fast enough. At the time of his passing, he had been waiting around the Fort Benton station for almost six years.

The furry little celebrity’s death was big news, with the Fort Benton River Press breaking the tragic story and declaring Shep “one of the most famous dogs in the world.” Many people, as expected, turned out to say goodbye to him when his funeral was held just two days after the sad event. It’s reported that hundreds of mourners gathered to pay their last respects to the loyal little dog who brightened the days of so many people, near and far. The revered canine was even honored with a playing of the military funeral hymn “Taps.”

Shep was buried near the station where he had lived the last years of his life, his resting place marked by a small obelisk. The tale of his love and loyalty was never forgotten, though, and an incredible fifty years later, a monument worthy of such an icon was created.

In 1992, the town of Fort Benton saw a magnificent bronze statue of Shep come to fruition, created by masterful local artisan Bob Scriver of Montana. Titled “Forever Faithful,” it stands in a watchful, energetic pose — just as Shep himself did as he kept patient watch for his best friend. 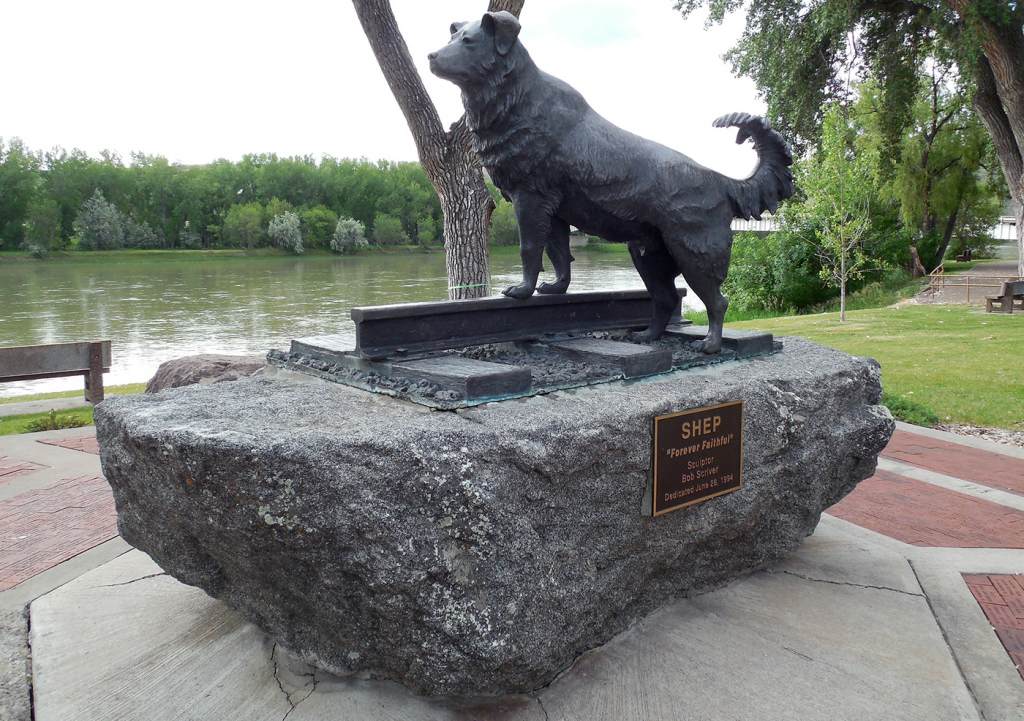 Shep remains part of the collective public consciousness, a shining example of exactly why dogs are considered our best friends. Loyal to the end and long beyond, the name “Shep” has come to be synonymous with this spirit.

Although we may never know the name of Shep’s sadly departed owner, they have been immortalized as part of the beloved dog’s tale. After all, Shep surely wouldn’t have been so unwaveringly committed to his master if he hadn’t been treated with boundless love himself, and that’s reason enough to ensure that their story is never forgotten.