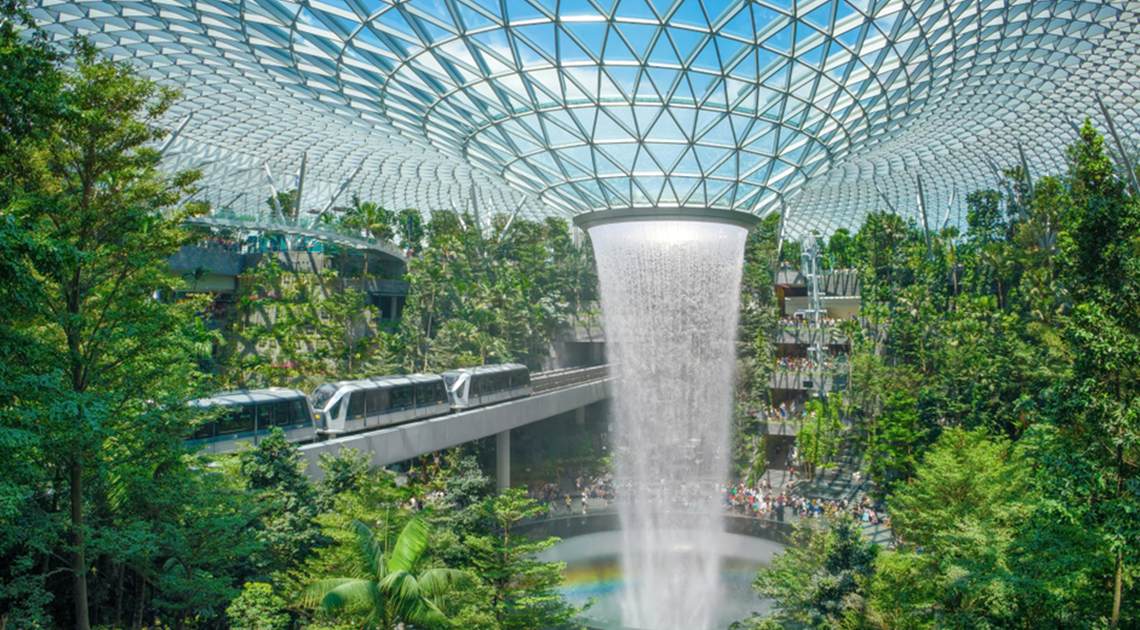 The Crown Jewel of Air Travel

The main attraction is the Jewel, a donut-shaped glass building featuring the world’s tallest indoor waterfall, known as the HSBC Rain Vortex. The 130-foot-tall waterfall uses recirculated rainwater that drops seven stories down from the roof, creating a cylindrical cascade. When the water hits the floor, it travels through a large acrylic funnel, creating an inverted waterfall for two levels in the airport located below the ground level.

The effect is magnified at night when the waterfall is the centerpiece of a 360-degree light and audio exhibit. The installation was designed by Los Angeles-based design firm WET, which also created the fountains at the Bellagio Hotel & Casino in Las Vegas. Design director Peter Kopik said the waterfall was built to be a continuation of the building, explaining, “It’s like the roof is pouring in and the building is getting completed in a liquid form.”

Even More to Explore

If the Rain Vortex isn’t enough to tempt you to have a layover at Changi Airport, perhaps the Shiseido Forest Valley will. It is spread out across five levels and reaches 100-feet high, with multiple trails for guests to explore. It’s filled with more than 900 trees and palms and about 60,000 shrubs. Special species from China, the United States, and Australia were chosen for the enclosure because they’re most likely to survive the structure’s temperature, humidity, and sun exposure.

At the top of the forest is Canopy Park, where people can walk the entire perimeter and get different views of the Rain Vortex. There are additional gardens, activities, and restaurants to explore. Attractions include suspended nets that you can bounce or walk along, a glass bottom bridge, hedge and mirror mazes, a sculptural playground, and even something called “foggy bowls.” 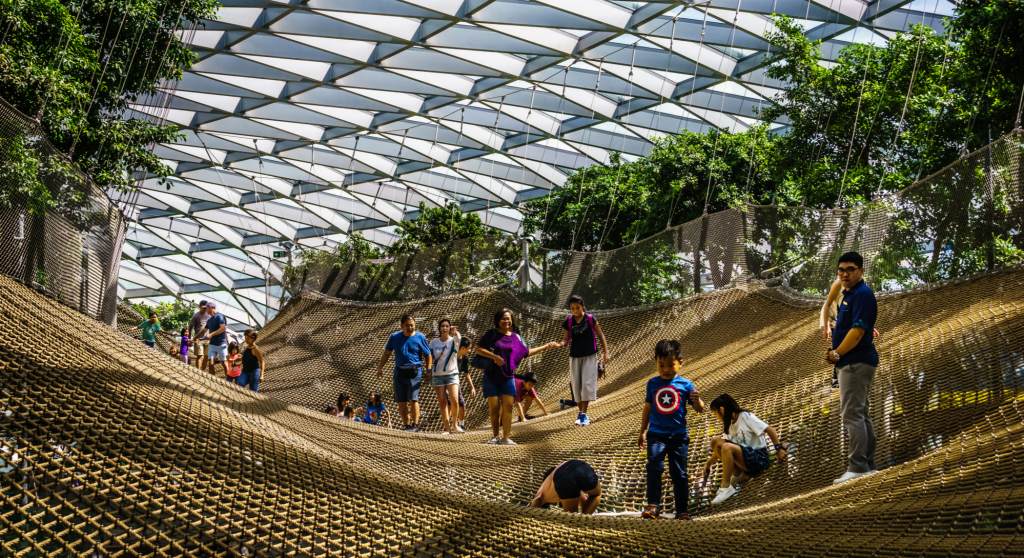 The Jewel is located near Terminal 1 in an area that used to be a parking lot. The attraction spans 1.46-million square feet and cost about $1.25 billion USD to build. It was constructed specifically to attract more tourists to the airport and make it one of the most desirable places to kill time between flights. After all, wouldn’t you rather explore an indoor forest and waterfall for a few hours instead of sitting in a crowded airport lounge with just your smartphone for entertainment?

Next post Is That Gum I Swallowed 7 Years Ago Still In My Stomach?