Organizers have special plans for if the flames go out.

From the ancient Olympic games—in which naked men punched each other into submission—to more modern games—where athletes have used metal legs to sprint to victory—the Olympic flame symbolically connects ancient to modern.

Some would say the story of the Olympic flame started all the way back in the ancient games—held in Olympia in 776 BCE—but to understand why fire was so important to the Greeks, you have to look at mythological prehistory. The Greeks believed fire was given to them by a primordial titan named Prometheus, who stole it from the gods to enkindle the minds and spirits of mortals.

Fires were kept constantly lit in temples throughout ancient Greece, but, during the Olympics, 100 oxen were sacrificed, and hundreds more fires burned in honor of the Games. Keeping a fire lit in ancient Greece wasn’t as simple as plugging a light in. Fires had to be maintained by priests, and wood and oil had to be collected and monitored around the clock. The Sanctuary of Zeus, a site containing a 40-foot ivory and gold statue of the god, shared in the glory with the nearby temple of Hera, Zeus’s wife. 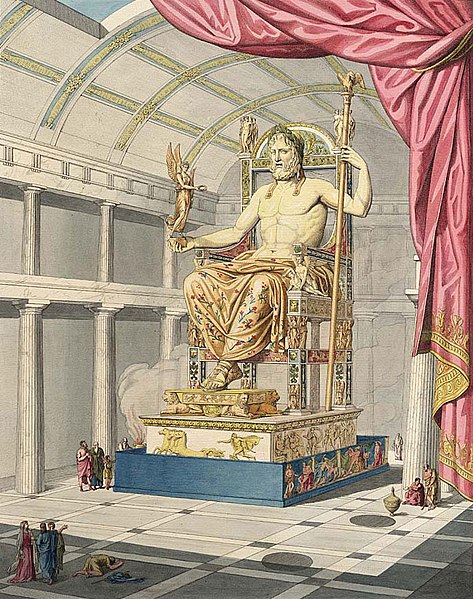 While the Olympic flames burned in ancient Greece, wars were halted, death penalties were abandoned, and borders were opened, all to facilitate the best performance by Olympic athletes and artists.

Everyone could be a contestant while the flames burned. A baker from Coroebus won the first Olympics; fully armored spartan warriors raced in marathons, and even Roman Emperors dove into the fray to win gold medals.

The ancient Olympics had their own share of controversies as well. One athlete was known for drinking two and a half gallons of wine a day with some claiming it gave him an unfair edge. Sportswear — when they wore anything at all — was also a feature of the ancient Olympics. The kynodesme — literally “dog leash” — eventually added a penis restraint to nude wrestling, changing a centuries-long tradition.

While the ancient games were around for centuries, the modern Games have only been around a little over a hundred years, and are very different. Despite that, the Olympic flame carried on — at least, eventually. The modern Olympic Games were revived in 1896 but wouldn’t carry on the Olympic flame tradition until 1928. 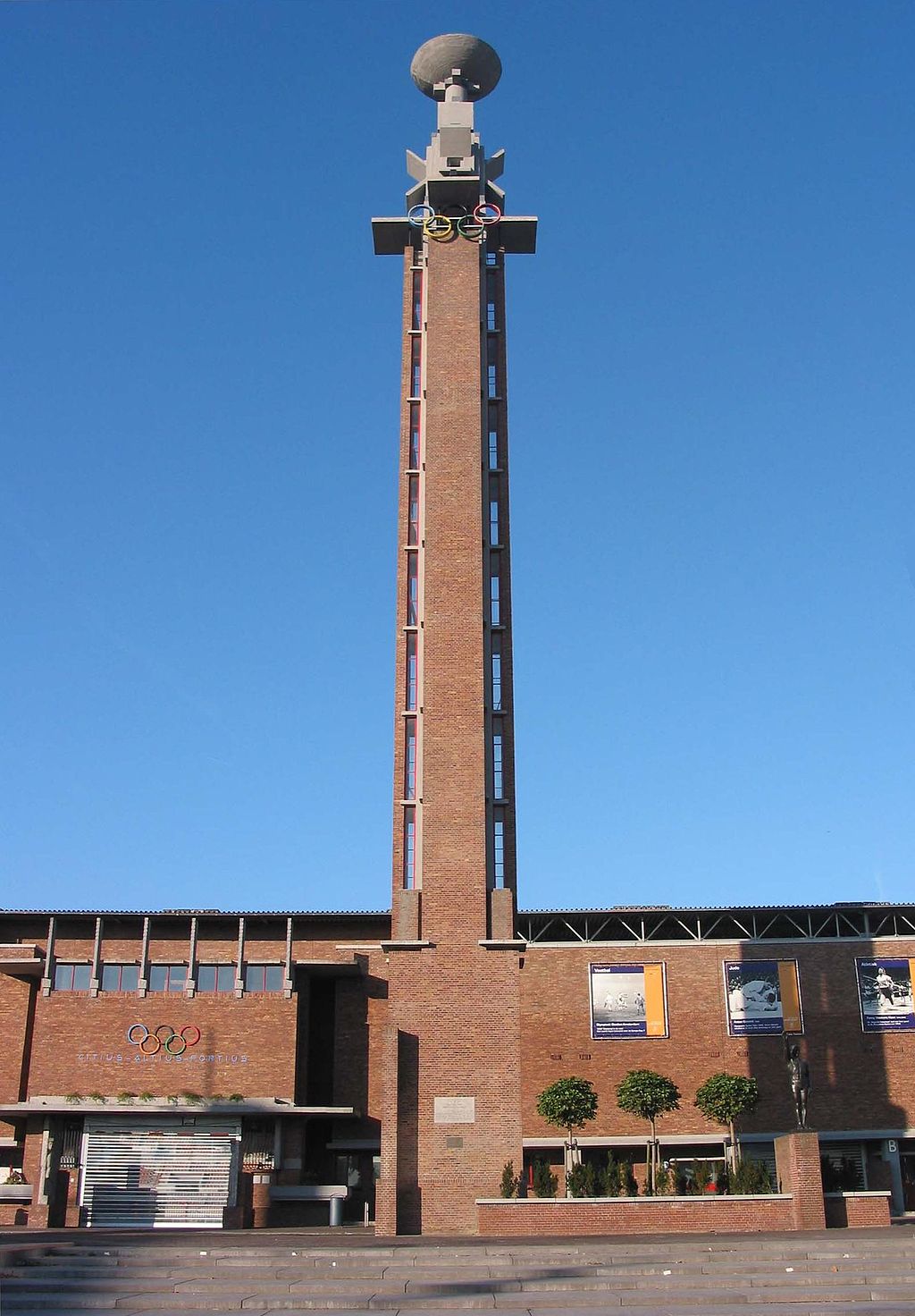 The site of the first Olympic cauldron./CC Vincent Steenburg

The first modern Olympic flame was lit by a utility worker in Amsterdam, presiding over the games from the Marathon Tower.

Since then, a lot of pomp and circumstance has been added to the ceremony. The flame is literally lit from the sun by eleven women representing the Vestal Virgins of Ancient Greece at the Temple of Hera. These women use a parabolic mirror to literally take fire from the sun. Carrying the flame to the Games is now known as the Olympic torch relay and involves literally carrying the flame to the site of the games. 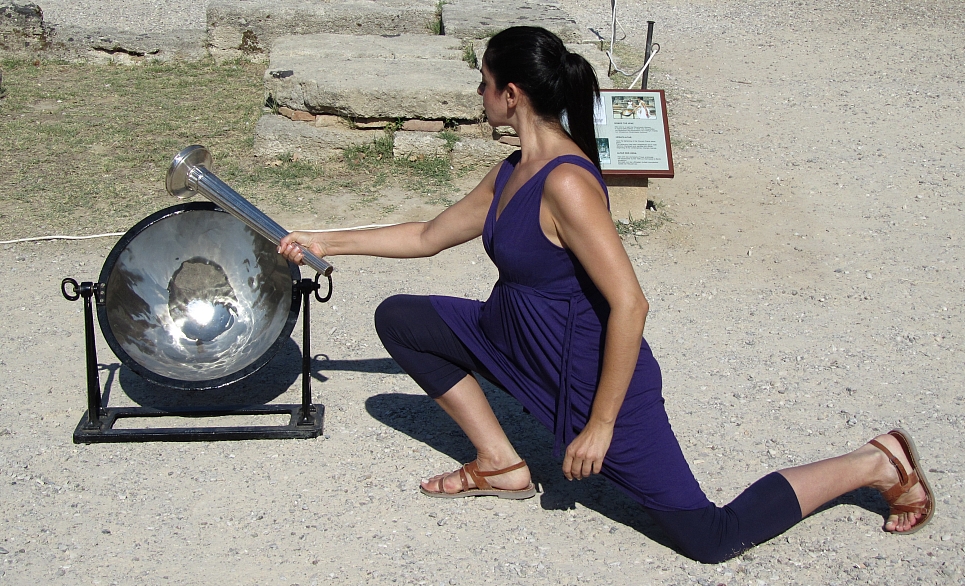 The torches themselves vary year to year and have been carried everywhere from the top of Mt. Everest to the International Space Station, with one torch even being specially made to burn underwater so it could pass over the Great Barrier Reef on its way to the Sydney games. Participating nations nominate torchbearers, and the people who light the Olympic cauldron are always given top honors. The 1964 torch, for example, was used to light the outset of the Tokyo games by Yoshinori Sakai, a man born in Hiroshima the day the atomic bomb was dropped. He ignited the flames to signal the renewal of Japan. Ripley’s Believe It or Not! actually has the torch that Muhammed Ali used to kick off the games in Atlanta, Georgia.

Now, despite being the “modern” Games, keeping the Olympic flame alive isn’t always a sure thing.

At the 1976 games in Quebec, a rainstorm doused the cauldron. An official actually relit the flame with his cigarette lighter. That flame was quickly snuffed and relit with a backup flame. The International Olympic Committee keeps backup flames in protected locations, all of which are lit from the original flame in Olympia. All manner of natural events, as well as intentional sabotage by people, have tried to extinguish the flames.

But, even the rigors of a global pandemic haven’t managed to put out the Olympic flames. Though the games were delayed a year due to the ongoing COVID-19 pandemic, they are now taking place in Tokyo. Officially still called the 2020 Olympics, the cauldron has been lit and burns proudly and brightly for the world. While our athletes might wear clothes, the Olympic spirit from ancient times burns on.

Next post Uncovering The Science Of Sci-Fi With Ripley’s Believe It or Not!