The first version of this bejeweled book sunk with the Titanic, while the second was destroyed in a Blitz attack on London during World War II. 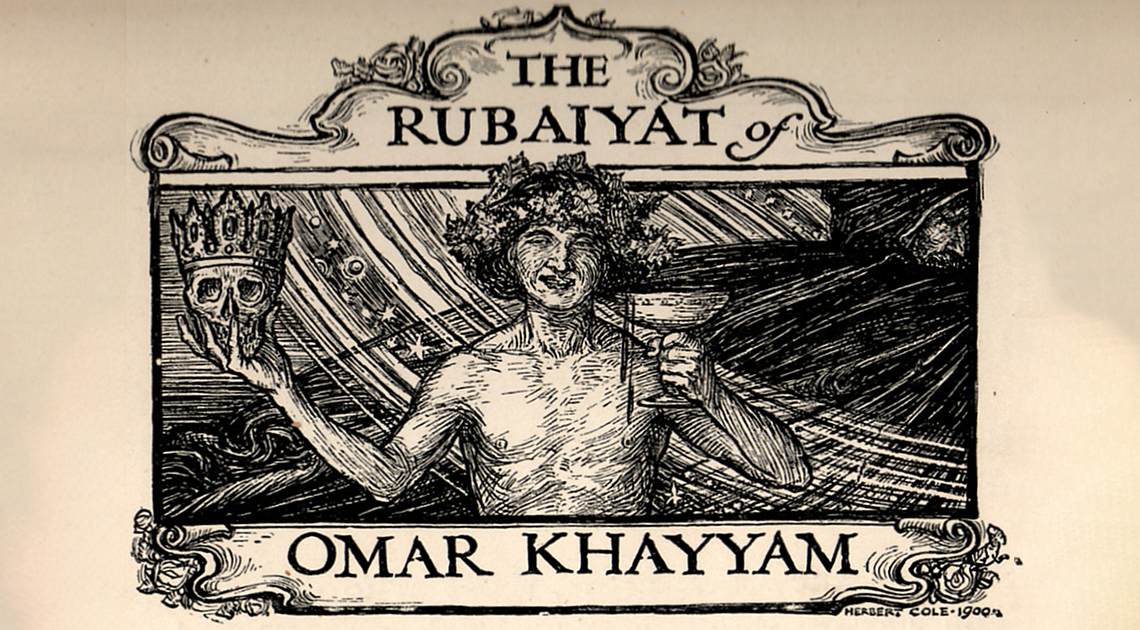 Is it possible for a book to be cursed? You may think so after learning the tale of one of the world’s most glamorous bindings, “The Great Omar.”

The word Rubái means quatrain, so this book of poetry basically translates to: “The Quatrains of Omar Khayyam.” Loved by many, including Oscar Wilde, the message of these stanzas resonated across the world. One of the main themes throughout the work is the importance of living in the moment. This might be because the poet can’t compel himself to believe in an afterlife, and so he feels powerless against the hand of fate.

The Moving Finger writes, and, having writ,
Moves on: nor all thy Piety nor Wit
Shall lure it back to cancel half a Line,
Nor all thy Tears wash out a Word of it.

The poet believes that nothing can stop fate, and an air of death hangs about the poems.

Before books were mass-produced with the same bindings, the process was an art form. Binding began as a way to protect the pages when the world began to stray away from scrolls. The cover was a chance for all kinds or artists to show off their work, from jewelers, carvers, embroiderers, leather workers, and more. Though it goes against the old saying, many people did (and still do) judge a book by its cover.

An Ornate Book with a Dazzling Price Tag

The binding of a book has a huge impact on its value. Many magnificent books were covered with gold and jewels, but none were quite as ambitious as this. Renowned book binder Frances Sangorski set out to design the most ornate book binding the world had ever seen. The bookstore Henry Sotheran’s commissioned one such book, and it’s said that the only instruction the store’s manager gave Sangorski was that it should be the greatest example of bookbinding the world had ever seen — money was no object.

And so, Sangorski covered the tome in more than 1,000 stones (including rubies, turquoise, and garnets), royal green leather tooling, and 600 sheets of real gold. One side of the book featured three peacocks, the other a gilded Greek bouzouki (a mandolin-like instrument). In some cultures, like Eastern Europe, peacocks are a bad omen. The plume of the bird was worn by invaders in the 13th century, and some people even believe that keeping a feather in your home will bring you bad luck. Then there’s the old saying, “bad luck comes in threes.” So, could the book have been doomed from the start?

Today is the 108th anniversary of the sinking of the Titanic. Also lost with the ship on the night of 15th April 1912 was the most elaborate binding ever produced by the London firm of Sangorski & Sutcliffe, the legendary “Great Omar” version of the Rubaiyat of Omar Khayyam. 1/2 pic.twitter.com/ozuPsqVvnH

This peacock-adorned Sangorski edition of The Rubaiyat of Omar Khayyam became known as “The Great Omar.” It took Sangorski two years of pouring over the pages to complete, and it should have earned Henry Sotheran’s a fortune. But fate had other plans.

The book was put on a ship to New York to find a buyer. While the lowest Sotheran’s would take for the book was £1,000, U.S. customs wanted to charge them an enormous customs fee to bring such an expensive book stateside. They refused to pay, and it made its way back to England by sea. Unfortunately, a coal strike caused the economy to halt. It’s hard business selling one of the most ornate books when few people were buying luxury items. Thus, it went up for auction, where it sold for less than half of Sotheran’s reserve price. Its new owner, having scored a bargain, attempted once again to get the book back to New York by boat. Unable to put it on their first-choice voyage, the buyer sent it on the next best ship headed that direction — the Titanic.

Drowning the Binding and its Creator

“When the Titanic went down on the night of April 14, 1912, in the sea off the New World, its most eminent victim was a book,” wrote author Amin Maalouf. While that’s a strong statement to make seeing as more than 1,500 people died, the ship that was meant to carry “The Great Omar” back to America was indeed the Titanic, and what remains of the incredible book now lies somewhere at the bottom of the North Atlantic Ocean. Tragically, just a few weeks after the sinking, Sangorski met a similar fate. Though he couldn’t swim, he jumped into water to save a drowning woman — only to drown himself.

The Book and the Blitz

Determined to continue their legacy, George Sutcliffe (of famed bookbinding company Sangorski & Sutcliffe) set about creating a second version of the book. Though not as richly decorated as the first, the second book was still a beauty. Whoever owned such a work would be lucky — but no one ever got the chance. When World War II erupted, the book was placed in a London bank vault to ensure its safety. Unfortunately, the vault as well as its contents were destroyed when German bombs dropped from the sky.

Sangorski & Sutcliffe recreated the Great Omar as it was called in the late 30’s, but it too was lost, this time in a bank vault during the Blitz… Picture from “The Cinderalla of the Arts: A short history of Sangorski & Sutcliffe,” 2015. pic.twitter.com/jZVGplqZoE

Third Time is the Charm?

Sutcliffe then suffered a stroke. Before he died, he passed the firm to his nephew, Stanley Bray. Undeterred by the trail of tragedy that seemed to follow this text, his nephew set about creating the third version of the book. When he finally completed it decades later in 1989, he died just 5 years after it was finished. The book was then donated to the British Library, where it has survived to this day. Just before his death, Bray was asked about the curse. He replied, “I am not in the least bit superstitious, even though they do say that the peacock is a symbol of disaster.”

Previous post The Surprisingly Popular Chocolate Bars Made With Blood